I don’t use recreational drugs.

The one time I tried them, I found that I lost a significant amount of my already lacking fine motor skills — which was terrifying.

However, I imagine that Spinch would be exactly the kind of game I’d want to play while high.

Spinch — which is not to be confused with a base ingredient found in salad bars before COVID-19 killed those — comes to us by way of P.E.I’s Queen Bee Games and indie comic artist Jesse Jacobs, who is perhaps best know for some work on Adventure Time.

It combines vivid art with a near-invincibility system that is both inviting to all players and exciting for technical players and a soundtrack that uses retro chiptune and circuit-bent electronics to create something quite freeing.

Tell me a Spinch

Spinch’s odd but endearing story is told each time you fire the game up. It describes how colours are living, breathing entities that have the metabolism of The Flash.  Thus, they require plenty of nutrients to continue doing their thing.

It just so happens that the best source of those nutrients is young spinchs — little Pac-Man-like creatures with legs and arms that grow up to be both strong of body and mind to protect themselves and their family.

When a colourful Mayan head boss takes your younglings, it’s time to spring into action and get them back. 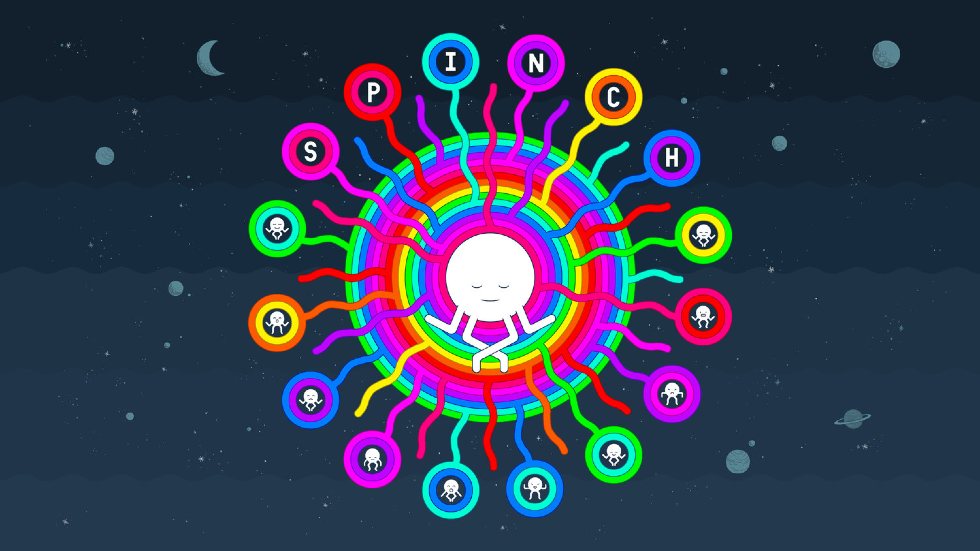 How did I get here?

The controls are basic to platformers. You’ve got your jump, your dash and your jump dash.

In terms of being forgiving, because your character can take three hits before being transported back to a checkpoint, there’s an element of grace. As levels become harder, the game offers you more reprieves in the form of extra hearts scattered around maps and increased presence of checkpoints. 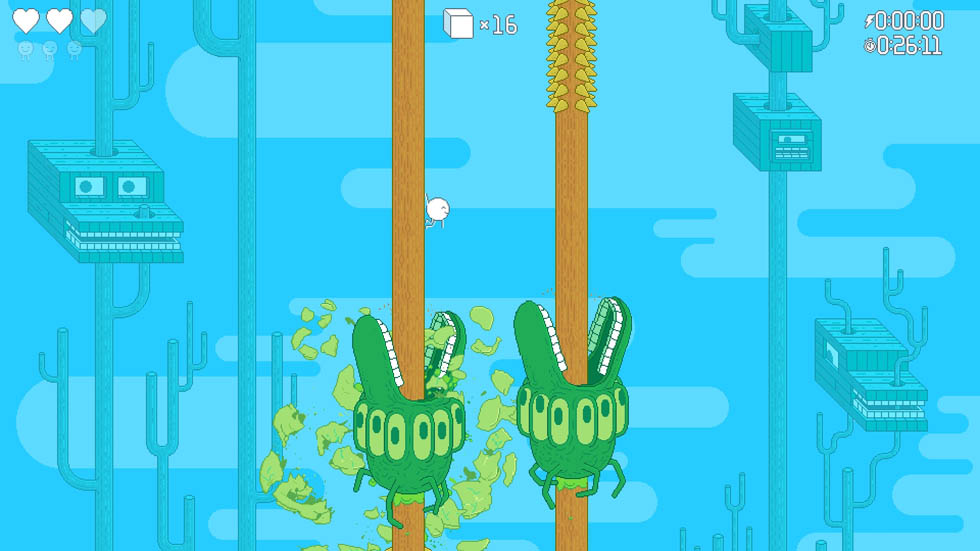 Spinch is incredibly enjoyable in the way that it offers multiple paths to complete its levels. If you want to avoid danger as much as possible, you’ll be able to find higher paths that will allow you to soar over enemies with your dash.

If you’re looking to set the speed records like the game intends you to, you’ll find plenty of great ways to use damage to boost your times. Once again, because you have so many hearts, you are free to experiment on how enemy paths and hazards can be used for a vertical or horizontal boost.

Another enjoyable part of Spinch is its final level bosses. After all of the time you spend looking for the three younglings to be found on each level, you’ll be forced to load them into a canon that requires you to perform a skill. You’ll then need to perform another skill to fire the younglings at bosses. Much like the game itself, its a truly strange mechanic, but enjoyable none the less.

As you progress through the levels and stages, the game will begin to throw harder platforming challenges at you. There’s a world where you are underwater as well as one in space, where jump timing and height becomes crucial.

While Spinch is intended to be an accessible platformer where there’s no death and no game over, the challenges do ramp up. Several levels become timed affairs as enemies and hazards begin to chase you. There’s also a marked increase in heart-stealing spikes and rainbow lakes as you go that will force you to think harder about timing and reflexes.

A game that focuses on getting you in a grove with its wacky and wonderful visuals and gameplay needs a soundtrack to keep you enthralled. Spinch delivers on this requirement with a warm and glitchy soundtrack from Canadian multi-disciplinary artist James Kirkpatrick. Samples from old arcade games have been mashed up with experimental electronics. 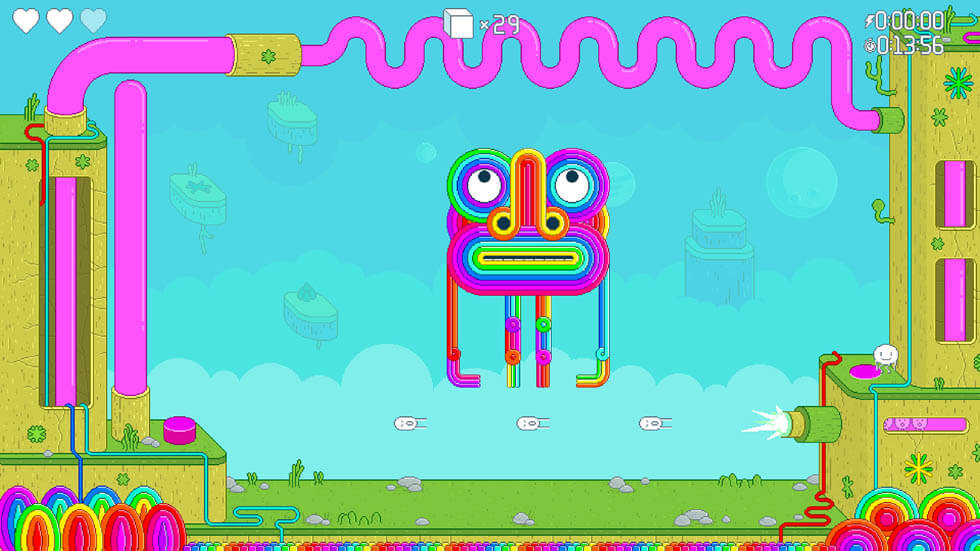 As things get more out there, so does the music. My only complaint is that tracks appear to be very short and loop quite frequently, which can become a tad annoying when the game intends for you to spend time perfecting levels and replaying them to get collectables and beat speed records. I found myself wishing tracks lasted a little longer before looping or had a bit more variation over time.

Because of its psychedelic and vibrant nature, Spinch is a game that you are likely to enjoy in small bursts.

Its animations are smooth and succinct, but the oversaturated pinks and purples and yellows can become quite retina-burning quickly.

As is the trouble with a lot of these vaporwave games, Spinch reaches an intensity in how it plays out that becomes fatiguing. It’s a game where you’ll pick it up and attempt to set some new records, maybe complete a level and then definitely need a break from. 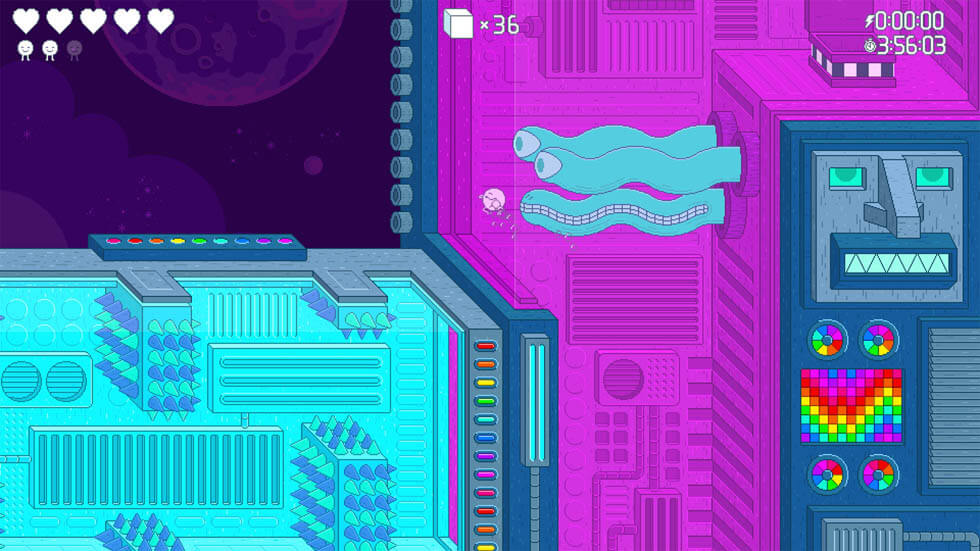 Spinch is a great example of an accessible platformer that invites you to first enjoy and then overcome. It’s full of colour, life and music and that can become oversaturated. Yet, it’s a wacky, wonderful and just plain strange game that is worth picking up on PC or Switch.