Returning to the world of Secret of Mana is a huge nostalgia trip. I grew up with this game, and I have fond memories playing this with my childhood friends together. This game also led me to search out the sequels, including the never released Seiken Densetsu 3, one of the best games available on the SNES at the time, and one that never got an official release outside of Japan. Luckily, there was a wonderful fan translation that helped a generation of gamers experience it. Secret of Mana is back as a remaster of 1993 original, but, it is a 1:1 remaster with very little done to enhance the experience and streamline the game for 2018. The result is a colorful take on a classic RPG but one that never manages to find footing under pressure of the archaic game systems still in place.

This is not a bad remake, this is just a shallow remake. The sprites of yesteryear have become full polygon models that are much more appealing, but lack life. Old animations are neatly ported but nothing is done to improve them in any justifiable way. Randi and company may look better but they move stiffly and lack any real fluidity – this is especially noticeable during cutscenes, where characters mouths do not even move.

What I originally loved about Secret of Mana was the simplistic story being told. To this day, I enjoy that aspect of this game. Playing as Randi, the young protagonist comes upon a rusty sword in the woods, as he pulls it from its housing, things begin going awry. He soon learns the importance of the sword and after he is banished from his village, he is left with the task of discovering why the sword called out to him in this time of need. A new feature and a first, Secret of Mana is voiced in Japanese and English with the option to turn off the voice acting is so desired. You’ll notice that the voices range in performance, some sound better than others and there’s an uneven awkwardness when you hear characters speak. The soundtrack was updated to fit the new look and there is also the option to select the original soundtrack that was available on the SNES, I prefer the newly remastered soundtrack that fills your ears with nostalgia.

Environments are faithfully recreated and feel good with a fresh coat of paint. Dungeons, towns, and bosses are faithfully recreated, going so far as to include many of the nuisances found in the original including more backtracking than I’d like as well as mazes within dungeons. Each dungeon involves discovering the right weapon or spell to use to pass through and continue on to the area’s boss. One area I had hoped would get a jolt of life was the combat. Each of the seven weapon types has one attack that needs to be charged up by a meter that controls your hit rate and damage. If you swipe at an enemy, you better wait until that meter hits 100% otherwise, you’re running on fumes and dealing a fraction of the damage. Your best bet is to attack your enemy, get away and wait until the meter fills up. Years ago, this would be okay, today, not so much. It gets worse when you face multiple enemies where engaging enemies becomes a chore. Weapons level up by using them in battle, as the weapons gain levels you can use them concisely.

AI is dodgy and often you’ll see your companions die because the AI couldn’t do the sensible thing and move out of the way of an attack. There’s luckily hotkeys that were added to the remake, so equipping healing items is but a press of a button away. 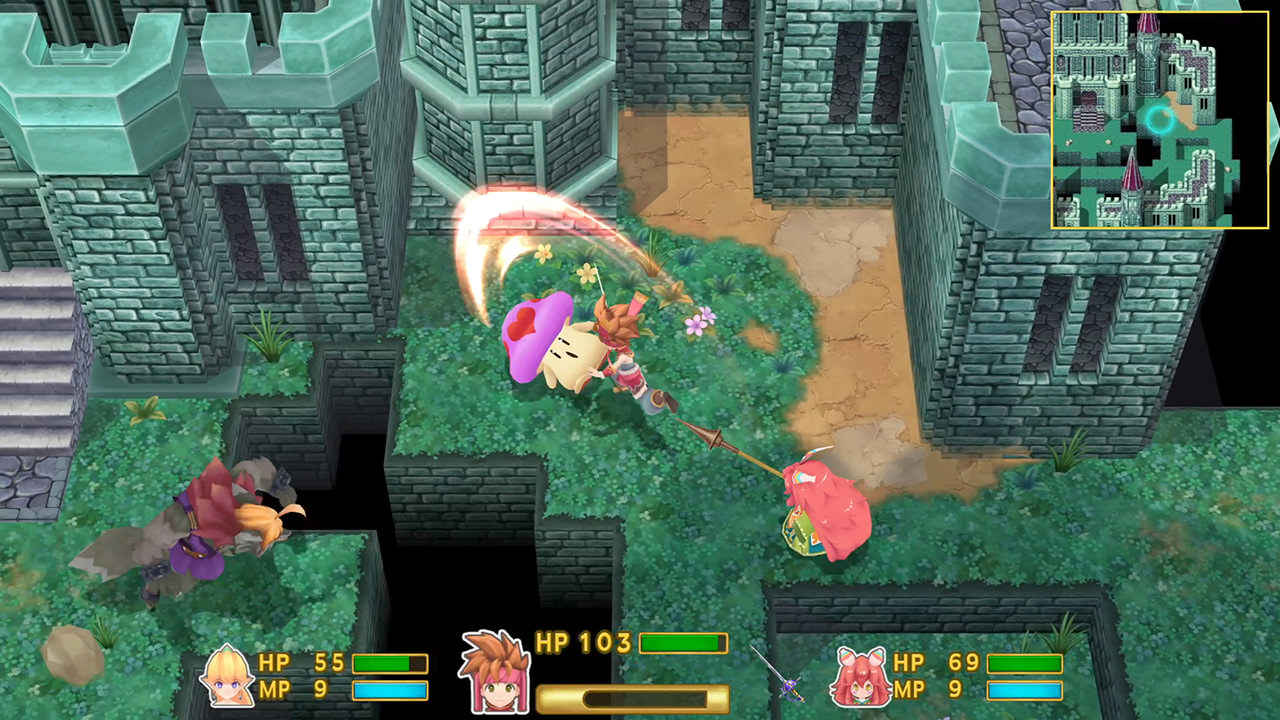 Some noticeable changes include the most-welcome addition of the new maps. These are the original areas used as maps in the remake, it helps when working your way through a dungeon. Square somehow removed the cursor position within menus, so if you open a menu and close it, it will not be the same menu. You’ll end up entering the wrong menu and spend more time unnecessarily working through options.

Secret of Mana feels out of place today. Instead of enhancing the original in meaningful ways, we get something that detracts from what made the original so grand. As nice as it is to revisit an iconic game like Secret of Mana, this feels like a missed opportunity to make the Mana series great once more. The frustrating AI and the stiff animation work against the updated graphics and some of the charm of the original are lost. If this is your first go-round with this classic RPG, you may enjoy it, otherwise, check out the original or the version included on the SNES Classic. If you are a fan of secret of mana you owe it to yourself to pick this one up, it may not be perfect, but it’s a trip down memory lane. 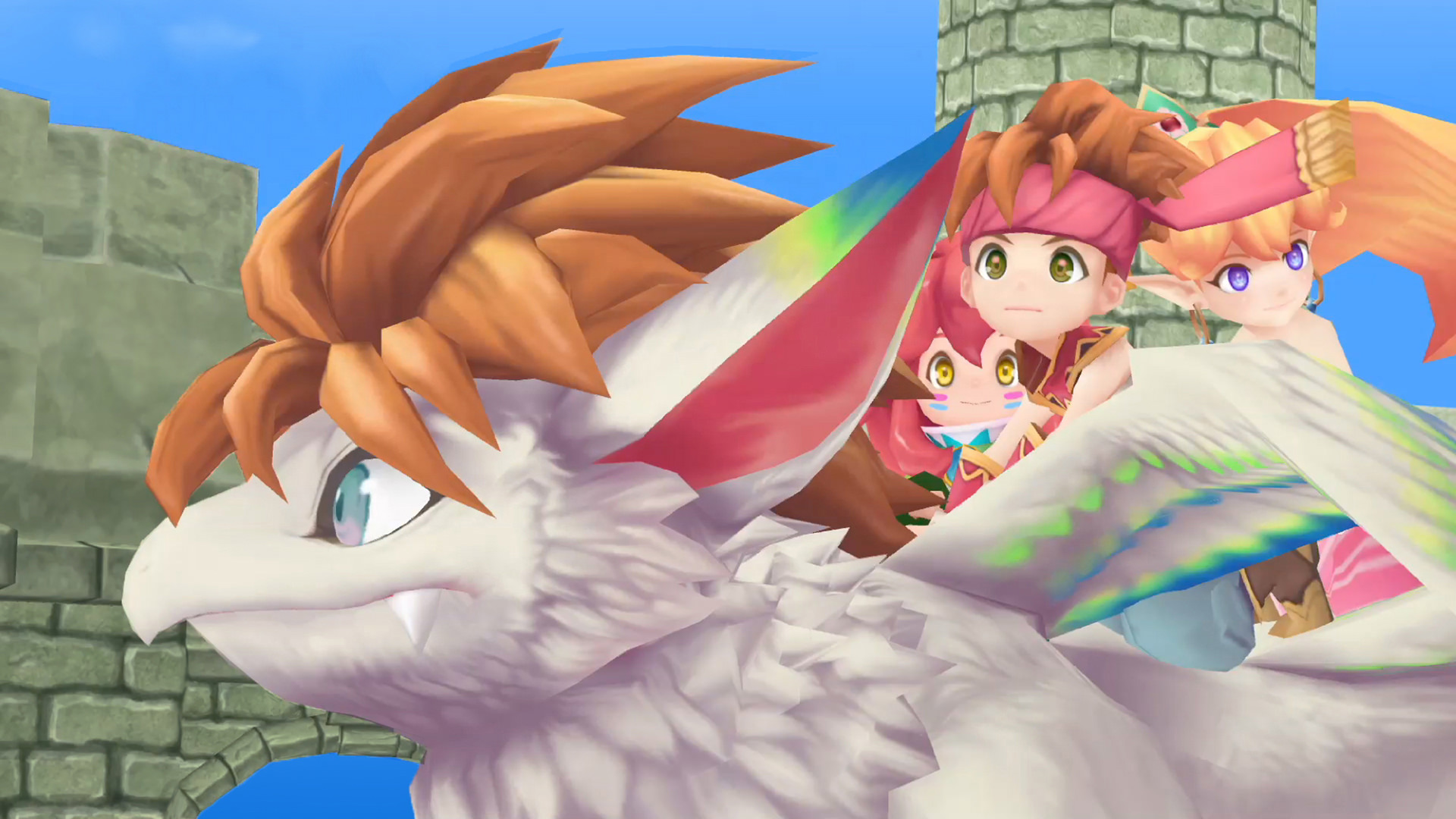