After playing through a handful of betas prior to launch, I was at odds with myself. On one hand, I loved the idea behind Sea of Thieves, the latest from Rare, but on the other hand, there wasn’t enough content from the onset to keep me invested for too long. There’s certainly the potential for a special experience here, but right now, this is hard to see. Rare is promising more content now that the game has launched, but what exactly this content is and when it is available can very well dictate the success of Sea of Thieves.

Marketed as an online-only persistent-shared world adventure game, you play as a pirate of your own making and sail the seas in search of treasure and adventure. There are islands and outposts to discover, supernatural forces out to get you, and grog to get you brave enough to venture out in search of all of it. Of course, this isn’t a journey for one, so you’ll have to gather your crew to help manage your ship. One person will sail the boat, one can navigate the course, while the others can help defend against attacks if need be. These voyages are a crucial aspect of bonding with your friends if you’re playing with them, but it’s also a fun and engaging way to meet strangers.

I know many reviewers have shared early impressions and reviews in progress but I’ve been mum on the experience as I’ve tried giving myself a deep dive into the game and experience as much as I could, before gathering my thoughts on the game. Starting the game puts you into the thick of things with next to no tutorial, and you’ll be left to your own devices to explore, learn, and overcome the game’s learning curve.

What Sea of Thieves excels at, are the moments of pure joy you’ll find playing with friends. Whether they include you and your friends successfully overtaking another ship or facing the Kraken – it is these moments of sheer chaos that amount to the true pedigree of Rare. The sandbox is open to all, and this time, it’s a level playing field to its core. In Sea of Thieves, there isn’t a progression system like many other games use to show player progress. Instead of levels, loot, abilities, and the like, everyone is simply in the game, albeit some players may have more experience by doing quests and playing more often. It is wholly different to what the traditional experience is like today in video games.

Quests suffer in part due to the emptiness of the world. Outposts provide new quests to accept from three various trading companies: Gold Hoarders, the Order of Souls, and the Merchant Alliance. The type of quests varies by each company but they are all simple fetch quests that involve little in way of thinking. Go here, get this, bring it back. Rinse and repeat. The first few times you do this, it’s fun, but that feeling of success is fleeting and wore off for me in the beta. This wouldn’t be an issue if nearly every island was somewhat different, except it isn’t and many islands are the same. Most of these quests provide cosmetic items to dress your character, a cosmetic-based progression system that lets you dress like the ultimate pirate. Unfortunately, many of these items feel and look the same, so it’s hard to want to continually look for new gear to wear.

Visually, Sea of Thieves has some of the most astounding waves I’ve ever seen. The water is something special and I can’t name one other game that’s simulated such terrifying seas like Rare has done here. My first storm took me by surprise as I ended up being taken aback by what occurred as I set sail straight through the chaos. Lighting and thunder overtook the skies, rain poured over me, my ship was taking on water as the hull was damaged. We were over our heads here and trying to stay afloat trying to keep ahead of the storm until the rain stopped and the skies cleared. The thrill of survival was addicting the first few times, and each time after, the adrenaline helped us survive the eye of the storm.

I believe Rare has created the skeleton of a great game here, and Sea of Thieves has the potential to be something special. After four years of development, it’s hard to imagine where the creativity perhaps fizzled out, but Microsoft is betting on Sea of Thieves as a long-term investment. Sea of Thieves involves a lot of idle moments as you sail the ocean looking for the next location, the next pirate ship to engage and the next outpost. If anything, the social aspect of this game is wonderous really sells the bringing of people together. As it is, Sea of Thieves feels like an Early Access title that can’t decide how to sell itself and the novel experience shortly wears off. I may come across as negative here but I really do like what Rare has created here, an exciting playground to get lost in. My issue lies with the lack of toys in the sand(sea?)box to use, and have faith in the studio to push out a product that carries the Rare panache. As it is, this is a good game worthy of the Xbox Games Pass – as a full game purchase, I’d stay away until more content is available. 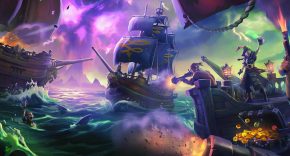