I wouldn’t blame you if you’ve never heard of the SaGa series. It isn’t as popular as Final Fantasy or Dragon Quest but it definitely does have a following. In the West, it never made a splash but over the last few years, Square Enix has done right by the series, porting games to consoles and bringing previously exclusive titles over. The last time I played SaGa Frontier, I was ten years old and high off playing a trove of RPGs on the OG PlayStation – to this day, I’ve never finished it or even understood what was happening or what I was supposed to do, but it kept me entertained. Now, two decades later, I’m returning to finish what I started.

Beginning as Final Fantasy Legend, the series soon evolved into Romancing SaGa, a series that was created by Akitoshi Kawazu. From there, the series evolved over the years and the biggest difference was the difficulty of the gameplay between the two Squaresoft properties. As time went on, bigger changes were made, including non-linear gameplay and open-world gameplay that would offer branching storylines. To say the series was ahead of its time wouldn’t be a lie.

SaGa Frontier Was Ahead of the Curve

For the remaster, which is set to launch this week, Akitoshi Kawazu returns to restore cut content that was removed to time and budget constraints. While the original game included several characters, each with their own intertwining paths, the remaster adds Fuse, the eighth character whose storyline intertwines with the other protagonists. Each of the eight characters has different goals and endings you’ll need to uncover, and your choices affect how the events within the game unfold thanks to the Free-Form Scenario System. 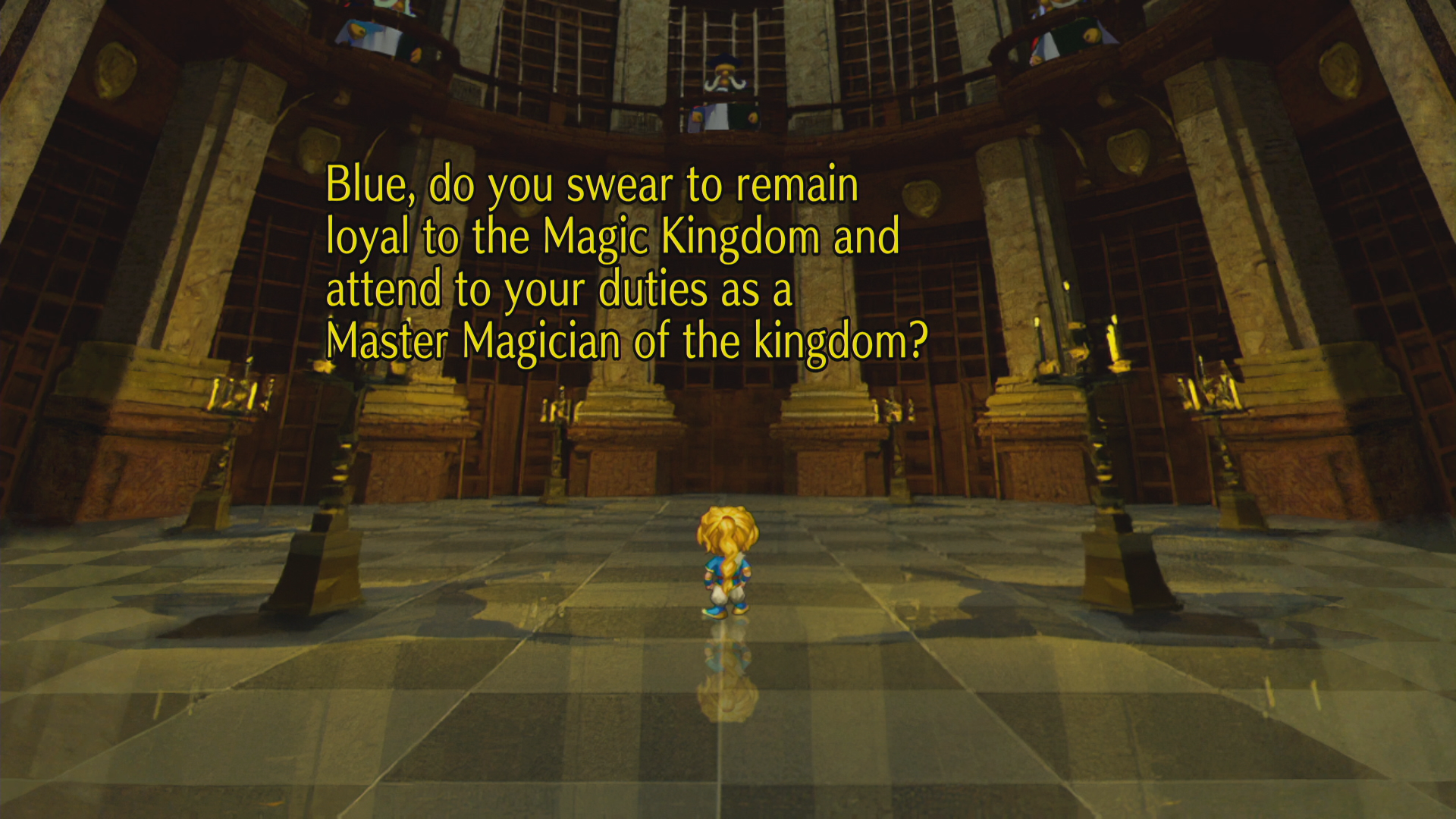 The Free-Form Scenario System always interested me. Basically, you can play as any of the protagonists, which resides with the solar system known as The Regions in the game. Each area has is different from the other, with different cultures, levels of advancement, even levels of magic. It’s an interesting system, especially as it’s over two decades old and allowed players the freedom to move about as they pleased. You control your chosen character and move about pre-rendered backgrounds that have been beautifully rendered with AI upscaling tech for the remaster. This is a big advancement for Square as it’s the first title from its catalogue to use the technology, after years of ignoring pleas from fans. 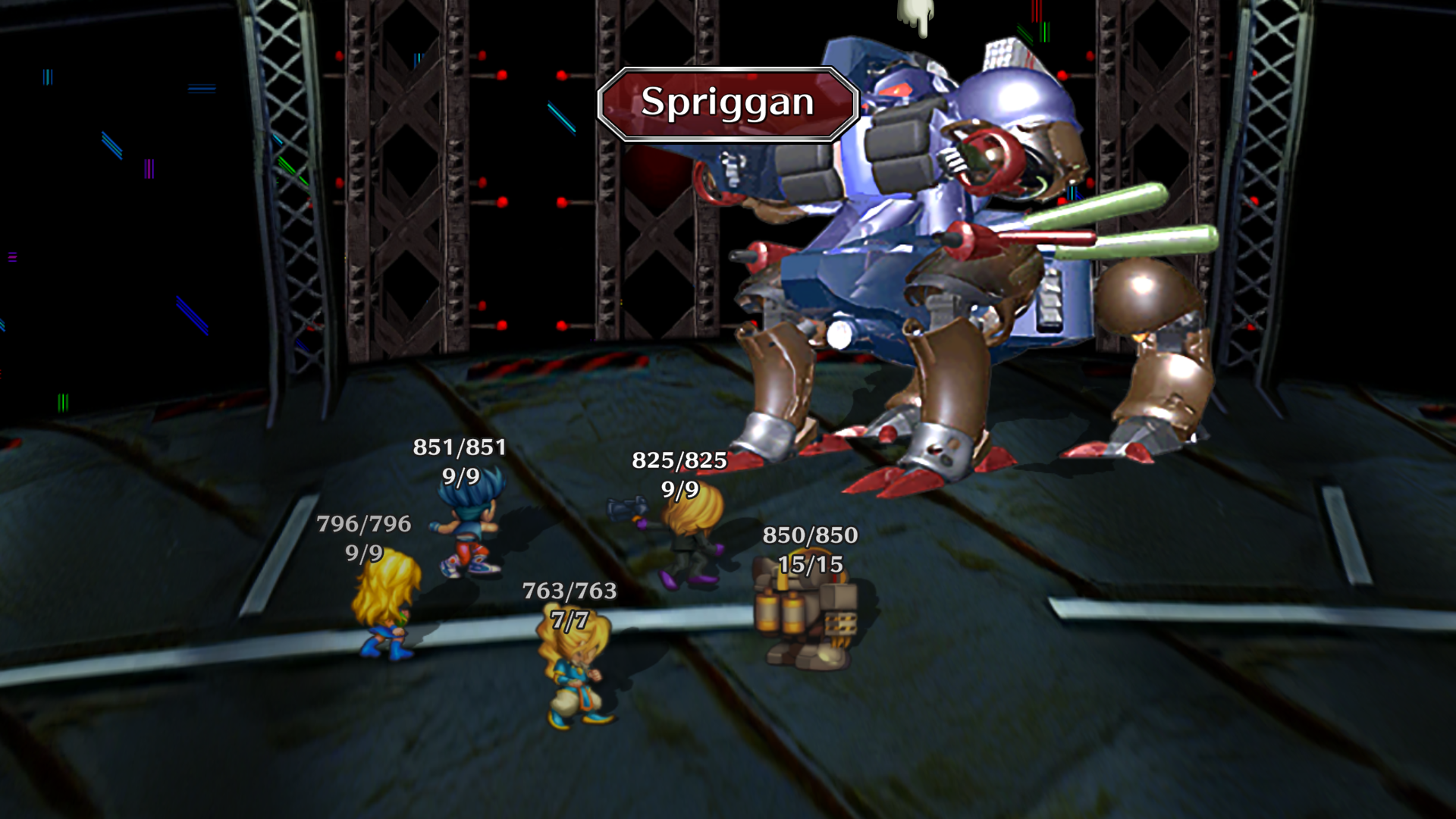 All eight characters, including Asellus, Blue, Emelia, Lute, Red, Riki, T260G, and Fuse, have varying paths to choose from and choices to make. Each decision you make will affect the outcome of your game, but if you want to press on and try things a different way, SaGa Frontier Remastered includes a New Game+ mode.

Completing any of the other protagonists’ storylines unlocks the episode corresponding to that protagonist, enabling players to enjoy seven different scenario routes in total, one for each of the seven other protagonists. Fuse, being a new addition to the game, integrates well in the existing storylines and serves a much greater purpose. 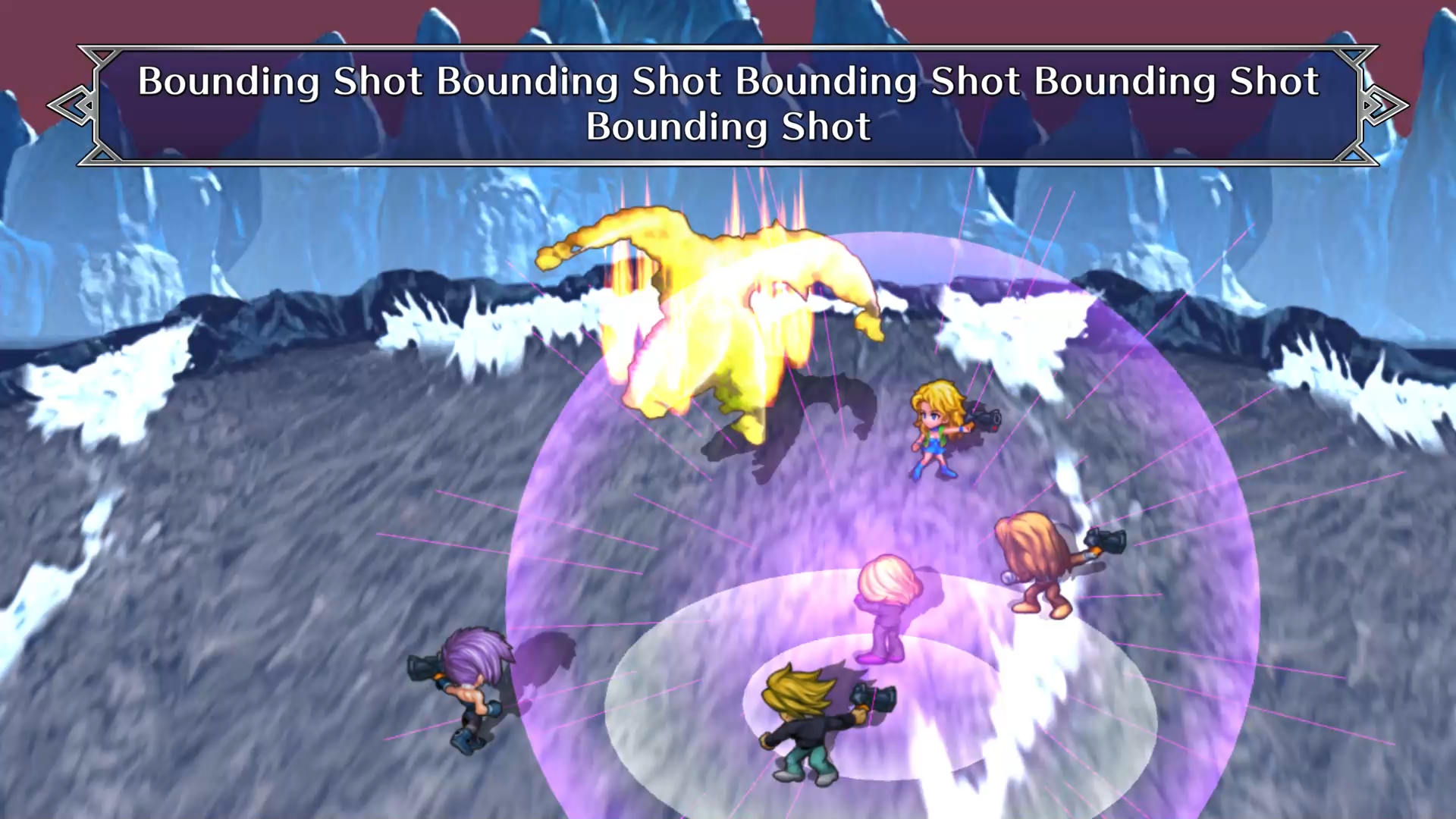 SaGa Frontier Remastered’s battle system is something that confused me as a child. It was much more difficult to master than Final Fantasy VII, I spent hours trying my best to figure out what to do but I could never get acclimated to the mechanics. As an adult, I have a bit more tolerance for mechanics. Instead of random encounters, enemies appear on the screen and you’ll need to initiate a battle with them. From here, you’ll choose a pre-selected team of five characters while setting their starting position. It’s up to your discretion to choose a team that has some level of variance and place them accordingly.

Most skills are learned mid-battle, while many spells are purchased in the game’s shops. If certain conditions are met within the battle, party members on either side can create combination attacks for added damage. If you’ve ever played Final Fantasy II, the idea behind the battle system is the more you use your skills in battle, the stronger they become and unlock stronger skills. 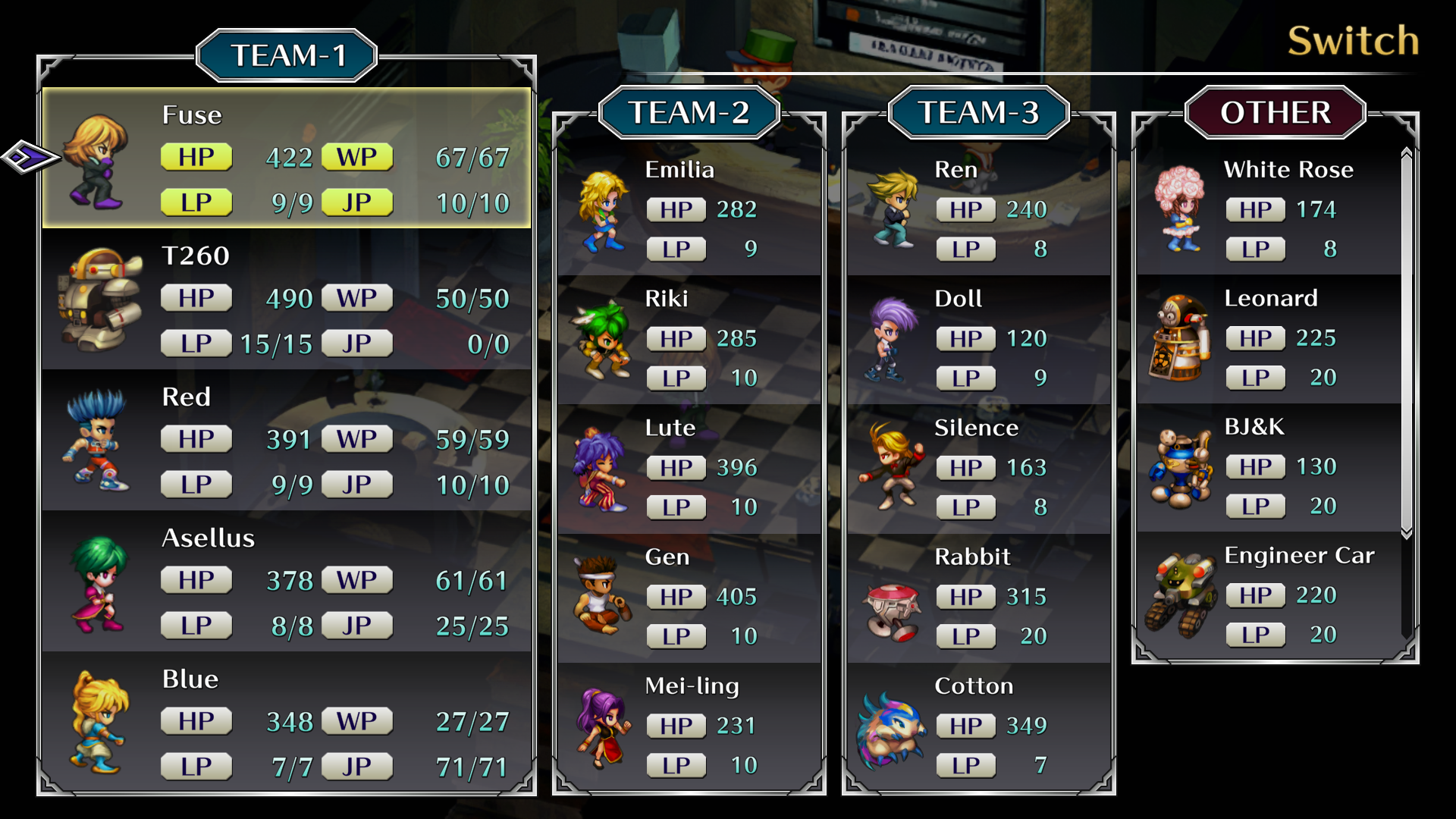 There are also a few things to remember about the battle system as there are three different races to be used in battle. Humans can freely use magic, skills, and weapons, robots use weapons and equip skills earned from other Mechs, Monsters can’t equip any gear but do have abilities at their disposal.

Humans can only learn new skills if they have an available slot for it and you can only bring a certain amount of skills into battle with you.

If you find the battle system confusing, I don’t blame you because it can get really deep at times. I haven’t even mentioned the Combination System which gives you the ability to combine attacks for extra damage against an enemy. If I could compare it to something you may be familiar with, think of it as being like that game’s Double and Triple Tech abilities. You can use two to five party members to coordinate attacks and each one is really fun to watch unfold. The downside is it’s hard to figure out who and what combinations work best. 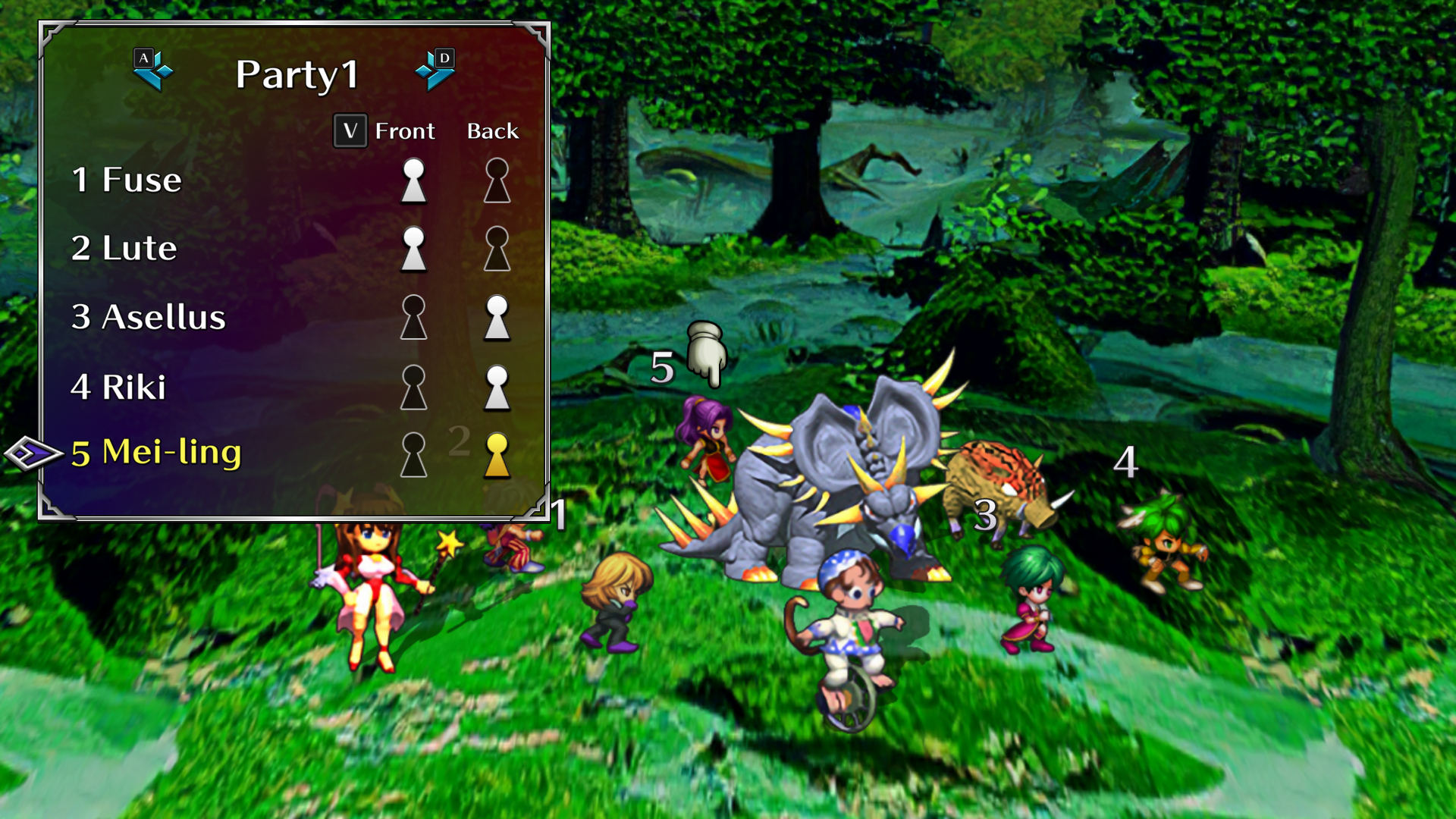 I’m very appreciative of Square including some quality of life improvements that make the gameplay better in today’s world. Like with most games they’ve ported and improved, SaGa Frontier Remastered comes with the option to fast-forward battles, or to flee them. You can now see exit markers on the map, making entrance and exit points visible, the option to auto-equip gear is welcome and so is the New Game + feature, which makes multiple playthroughs manageable, and provides bonuses to your next character.

For what it is, SaGa Frontier Remastered is a game that was ahead of its time. Warts and all, I found a new appreciation for what the development team tried to do here thanks to the exhilarating battle system and ability to freely move about as any of the eight characters available. This is a unique RPG that can often be too ambitious in what it does and while it may not be for everyone, diehard JRPG fanatics will surely find a great game.