PlayStation 5’s launch lineup is shaping up to be one of the best in the console’s three decade history. Of course, while third-party offerings are available at launch, it’s the knockout combo if Spider-Man: Miles Morales, Astro’s Playroom, Demon’s Souls, and Sackboy: A Big Adventure that leads the lineup. I’ve spoken about all much of the PlayStation 5’s series of games but no more has intrigued more than the latest take on Sackboy.

LittleBigPlanet is one of the franchises that I’ve always had a soft spot for and over the years spent dozens of hours with Media Molecule’s cute mascot. It’s the series that got some of my friends invested in video games and made them see the medium for more than it was, and a lot of what made the games so wonderful was the sense of community LittleBigPlanet nurtured.

And when Media Molecule moved on to Dreams, Sumo Digital picked up the property and ran with it, giving us a third LittleBigPlanet, and now one of my favourite takes on Sackboy. Speaking of our protagonist, Sackboy sort of speaks now and sounds like a child, which when I heard it on my first night, felt weird? It’s new but he hasn’t started with the sarcasm just yet, so at least for now, hearing Sackboy grunt is something to adjust to.

Unlike LittleBigPlanet, this game is a full-on platformer with no creation mode insight. If you’re upset about that – don’t be. In fact, get excited because Sackboy: A Big Adventure is an excellent platformer and I’ve been smiling the entire time I’ve played so far over the course of a week. There’s so much to love about the new take that I would much prefer this new genre over the previous 2.5D platforming we’ve come to love. My only compromise is maybe seeing the new platforming take to join up with a creative mode that lets players make their own levels in the new format, but that topic is neither here nor there now.

Sackboy: A Big Adventure is remarkable. The first few moments might be whimsical and offbeat but the moment you’re in control, this game shines. Sackboy is meticulously details and lifelike and has never looked better. So does Vex, the entity born from chaos who is out to destroy Craftworld, and incidentally is voiced by Richard E. Grant to great success. Vex wants the residents of Craftworld to build the Topsy Turver, a device that makes reality pure nightmares, and it’s up to you and your friends to stop him.

And, if you remember the floaty platforming sections found in LittleBigPlanet, the controls are refined to near perfection in Sackboy: A Big Adventure. A lot of the same button commands translate between series and now includes R2 to grab onto surfaces, X to jump and Square to punch, O to dodge. I don’t think I can ever go back to the old control scheme or the floating mechanics of LittleBigPlanet. Each level begins standard but the further stages add some really great moments that for risk of ruining the magic of the game, I’ll stay away from for your sake. 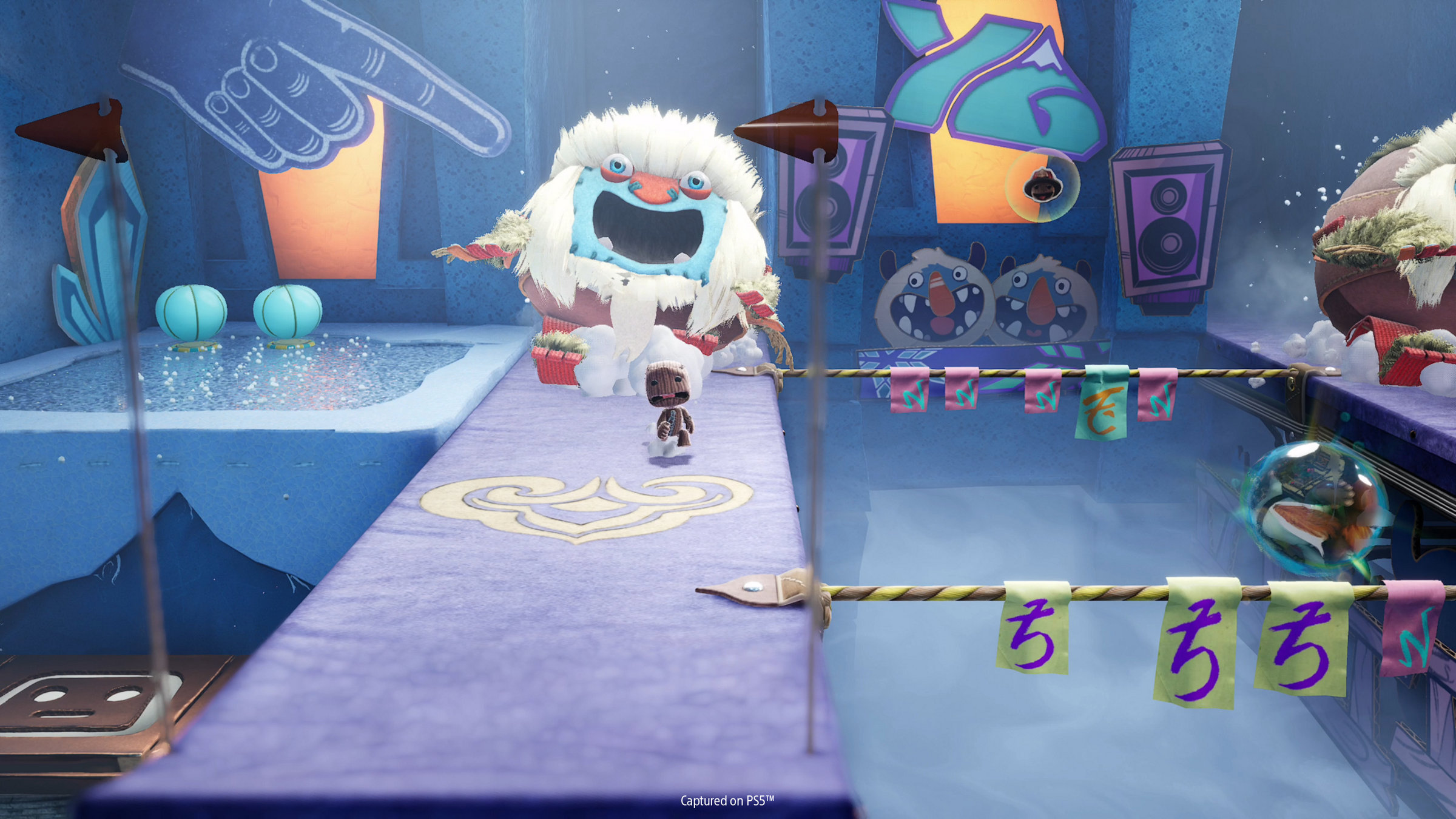 There’s an overworld that connects the stages and every stage is consistent, offering new ideas just as things begin to hit a stride. There are also hidden areas to discover and lots of collectibles that will have you scouring every corner for pieces of a costume. A lot of things I found myself enjoying about Sackboy: A Big Adventure comes from other platformers, namely the Mario series, which is about as excellent as they come for the genre. I’m talking precise jumps, the joy you feel when nailing a successful jump and how polished everything is. Some of the levels wonderfully incorporate licensed music to great success, going on to be some of the better levels in the game and it’s an experience that’s so ingrained in the LittleBigPlanet DNA, seeing it transition along with Sackboy is a treat for anyone who’s played the first few games in the series.

There’s so much to love about the stages and I haven’t even begun talking about other things this game includes, like the Knitted Knight Time Trials, which will keep you invested by offering you the most challenging levels in the game. With only one life available, you’ll speed run through 15 trials initially and be ranked from bronze to gold. If you succeed, a rare costume is added to your wardrobe for completing the hardest levels in the game. 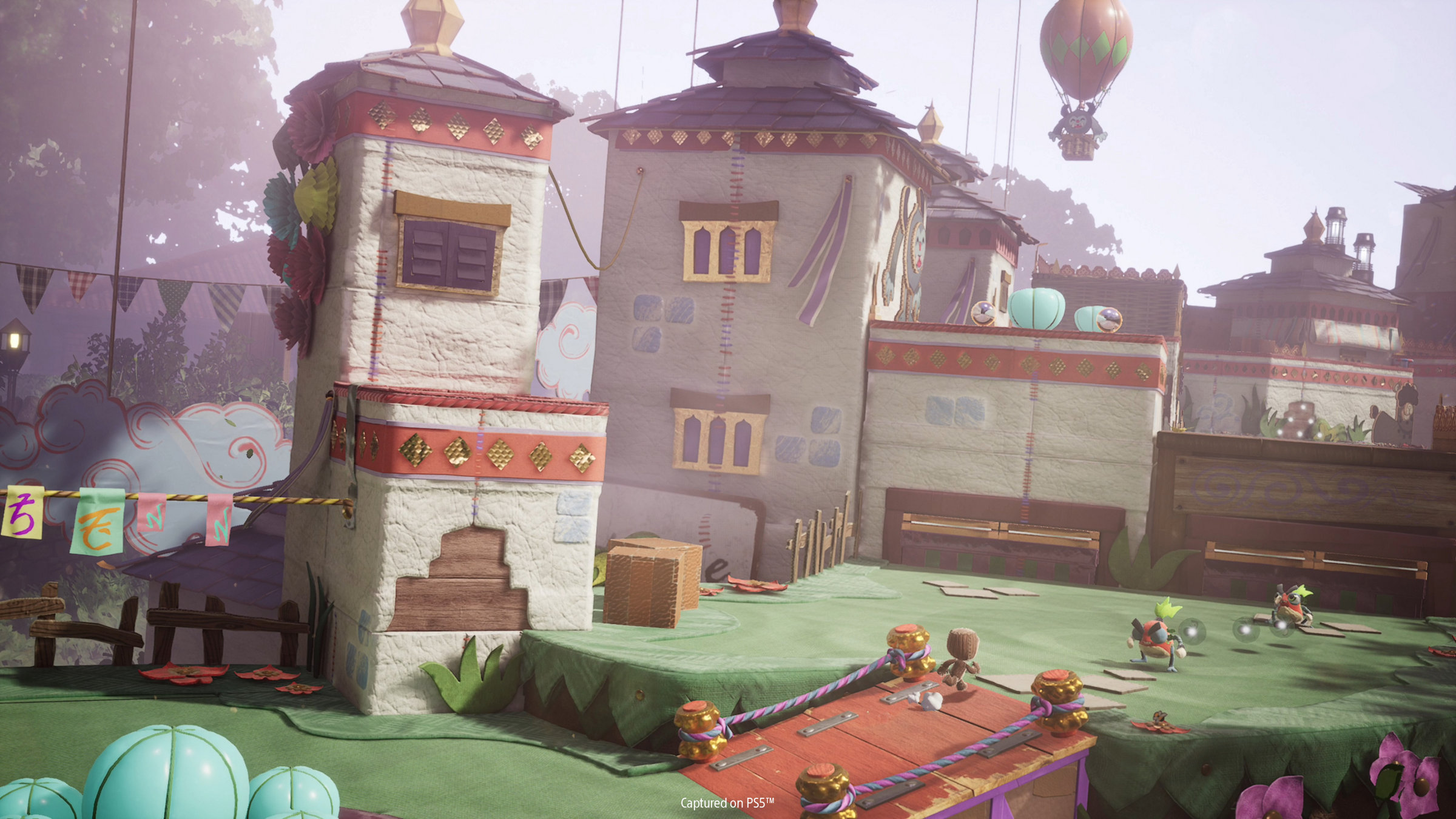 And after spending the past week playing, I’ve noticed that the way levels are built is meant for co-op sessions with more than one player. In some cases, you can tell by how many orbs you collect at the end whether or not having a partner would’ve been beneficial. I’d find myself either having to replay a level or backtrack because the number of orbs to proceed came up short a few times. It’s a good thing then that most of the levels are a blast and working through them is far from a chore.

Co-op allows up to four players both local and online (but online won’t be available until a big after launch day) and will support cross-gen play. Your saves transfer with you if decide to take the plunge and move over to PlayStation 5. One downside I’ve encountered is some levels are designed specifically for two or more players, I’ve been unable to really get a sense of how well multiplayer works and now with the pandemic, the only viable option is to play online with others. 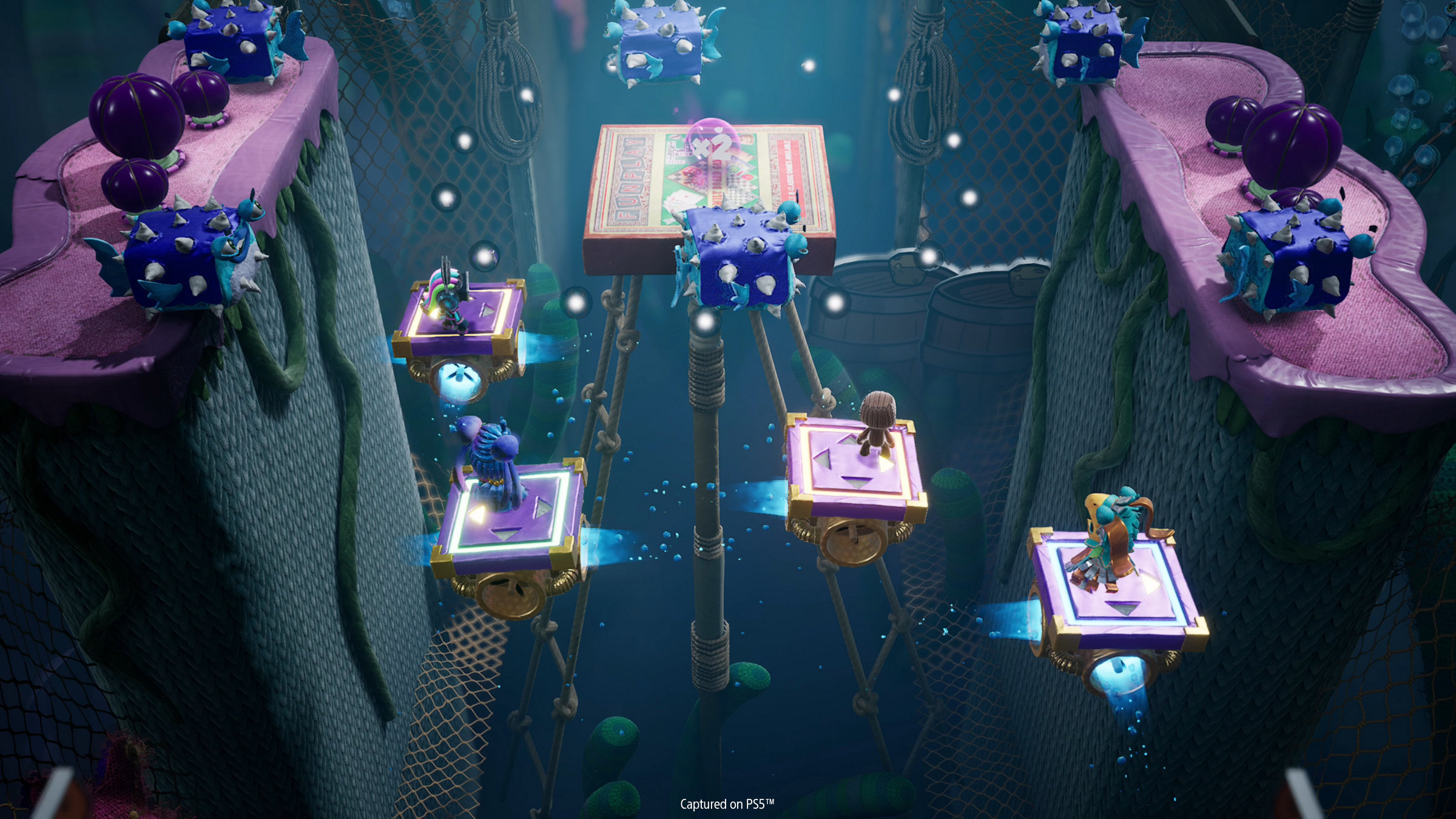 Sackboy: A Big Adventure is the perfect starter for anyone who owns a PlayStation 5 or even if you’re still on PlayStation 4. Whether you decide to save Craftsworld on your own or with some friends, this game is a blast. Bustling with tons of details and colourful locations for you to make your way through, Sumo Digital has delivered a game that’s so enchanting and stunning, it’s hard not to smile. PlayStation 5’s launch lineup is proving to be one of the best lineups, ever and Sackboy: A Big Adventure is an immaculate game brimming with love and charm, paired with responsive controls and great DualSense implementation. Regardless of what version you pick up, you can’t go wrong with your choice.