Now and then, I find myself wanting a game that is what it’s advertised as. With games getting bigger and longer and filled with more to do, I need to remember how to focus.

I’ve started doing that by taking breaks between open-world games to play indie games or doing one thing repeatedly to build focus. That latter category of task has made Roll7‘s Rollerdrome a title that fulfills and delivers what I ask of it.

Rollerdrome skates right through the story

Although it exists primarily to be a challenging arcade skate-shooter, Rollerdrome comes complete with a self-described “retrofuture” story. Here the year is 2030, and life isn’t all the bright future it’s cracked up to be. So the powerful Matterhorn corporation uses sponsorship of the gladiatorial gun-sport “Rollerdrome” to appease the masses. You play as Kara Hassan, a newcomer to the sport — who worships the cast of celebrity contenders she now finds herself skating beside.

Story progression hides behind your ability to knock things off each arena’s to-do list, so it takes a backseat to the rollerblading action. It’s also one rooted in an essential slice of 80’s sci-fi slogger. But I doubt there will be many a person who’s here for the story instead of the slick, on-skates shooting. So it’s nice to have both.

Complementary to most arcade skateboard titles, Rollerdrome leans into its gimmick, which is being a fluid skate-shooter with an emphasis on having you not slow down until you are done.

The story is very much a product of the 80’s sci-fi comics, cartoons, manga, anime, and movies that it takes influence. It also just kind of moves in between the dome sections of the game. 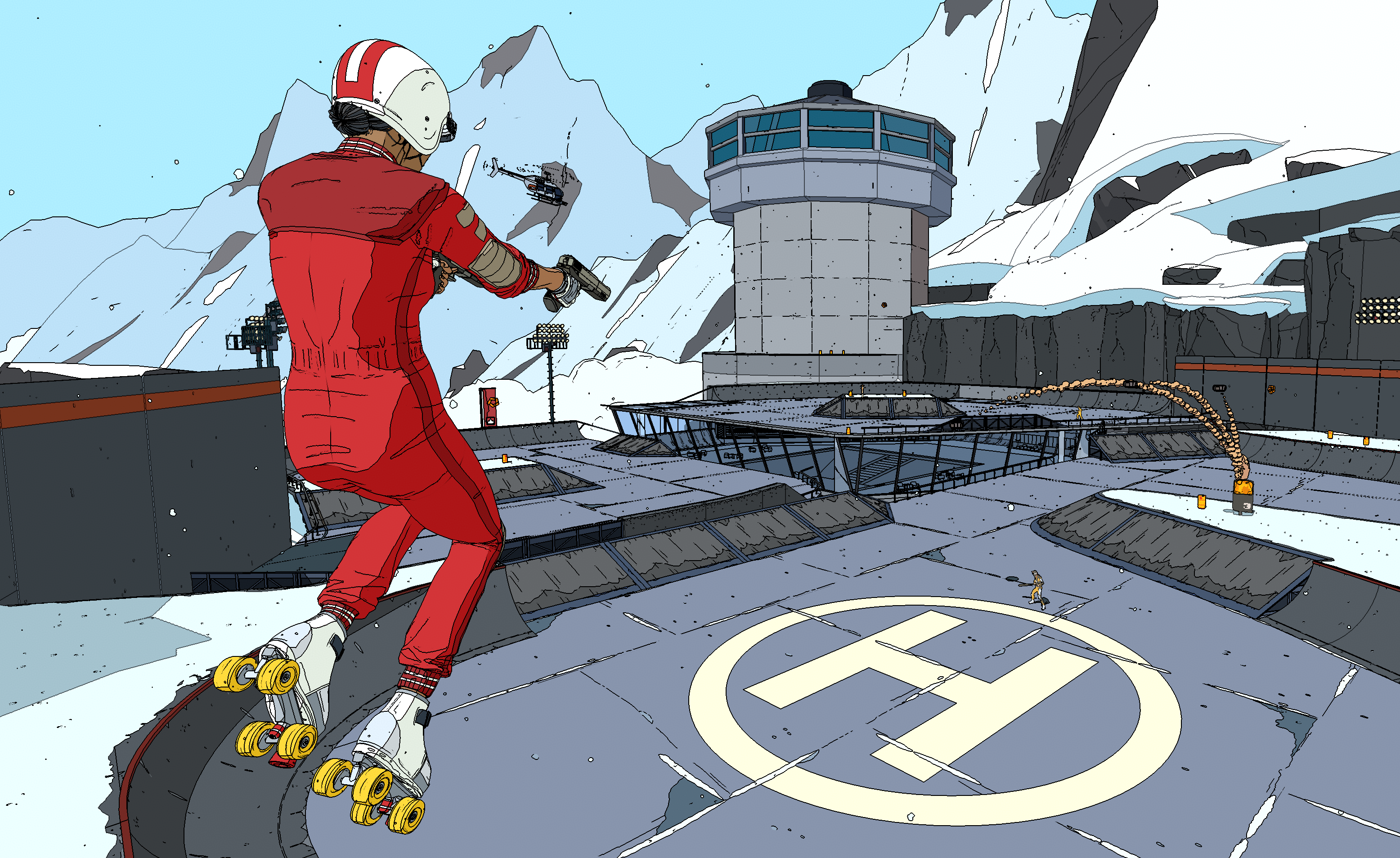 I instantly found myself reviewing Rollerdrome compared to Wave Break, which I played last year.

My biggest problem with the later game was that when you only have the two-minute time window popularized by Tony Hawk’s Pro Skater, you want something that keeps moving at your speed and with a basic level of functionality. Wave Break is maddeningly not intuitive or specifically speedy. Inversely, Rollerdrome is very much at the other end of the spectrum. Everything balances to keep your speed going. 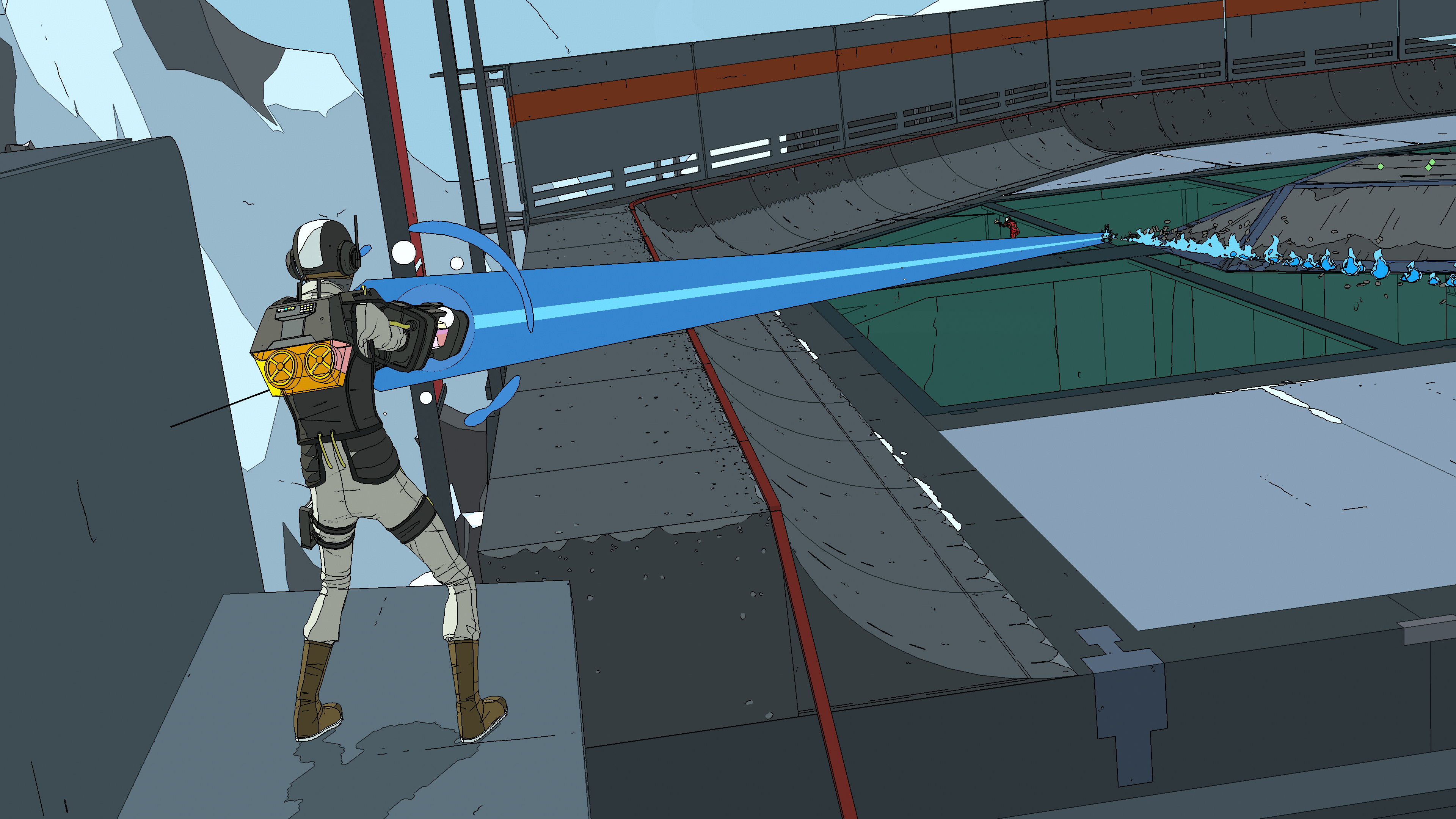 I especially like how restocking ammo is done by landing tricks because it keeps a strong immersion going that doesn’t waste your time. But it also adds a layer of complexity to how you take your runs. Pistols have a lot of ammo and are great at picking off the game’s enemy types, which are referred to as House Players, but they require you to be high on that combo multiplier to reload. The shotgun is deadly with its “slug shot” timed shot that does massive, but you will have to plan your lines closer to House Players. The positive to it is that it requires a lot less work to reload. The rocket launcher is a fan-favourite and decimates all House members. But with only two shots, you’re going to need to keep ticking to keep the bombs blowing up. 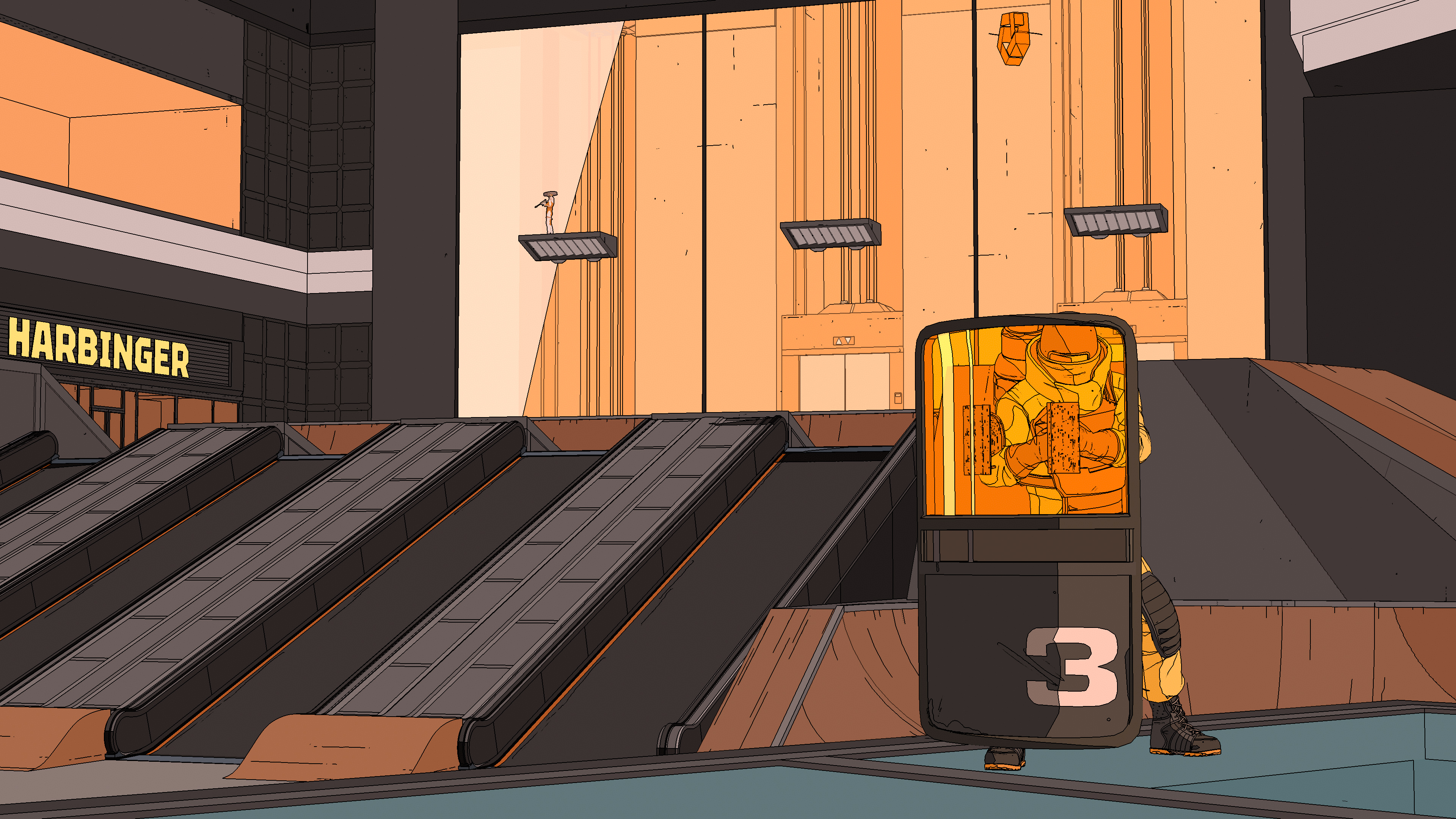 I am also a fan of the characters themselves. There’s such a variety of enemies to keep you sliding and shooting. And the mixture of waves makes careful planning a must. basic bat-wielding baddies are great for recovering health by easily killing. Snipers require dodges to reach, but they are also great for score multiplication as a result of landing combo-building perfect dodges. Shield-carrying enemies and rocket enemies with bubble shields require some ingenuity to dispatch, but you can also use their own attacks against them to make it easier.

A long time ago, in a future far away

Rollerdrome excels in nailing its retrofuture designation. While this is supposed to be the future, the arenas, enemies, and tech that fills the world feel like they peaked in the 70s or 80s. There’s hardly any future tech from TV cameras still operated by humans and robots that require a pilot, the goal is to present a world that is bleak and unevolved so that the wonderous blood sport in front of you takes the main focus. 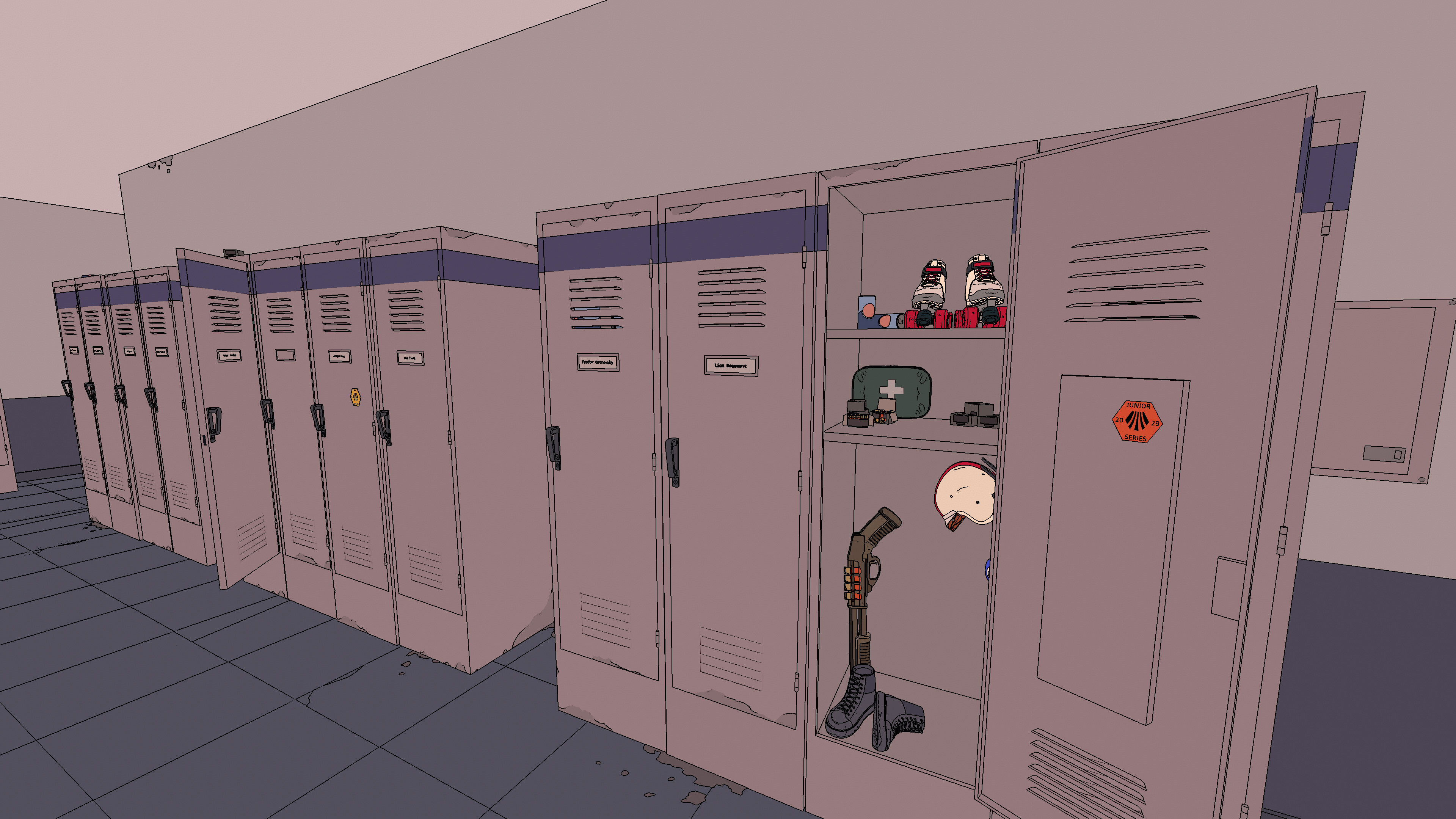 Being 80’s inspired, the game’s music is heavy on a rich, fuzzy synthesizer that quite honestly takes a back seat to the action of gameplay. It’s there, but for me, it mostly just faded out as I made my rounds.

True to the form of skate games that hide progression behind long “to-do” lists, Rollerdrome has major replayability.

For those looking to face down their friends as well as strangers, there are online leaderboards and a robust grading system to show your dominance over the arena.

There’s also a supposedly challenging hoard mode titled “Out for Blood.” I say supposedly because it’s locked behind completion of the campaign — something I’ve not yet been able to do. So I can’t comment on how it works. But I imagine it offers even more of the game’s unique enemy-type pairings on display.

Rollerdrome runs on the Unity engine with rather basic cell-shaded graphics, so this is an easy game to handle for most any PC. Playing on a Ryzen 5 3600 SKU with a 3600Ti, I had no problems running this game while also running YouTube in the background. I am also playing in UHD, which is supported by the game and makes the whole arena come to life!

In terms of controls, the game suggests playing with a controller is recommended but supports a mouse and keyboard. I tried both and found that because the focus is on tricking while shooting, the relative closeness of a controller is my preferred style of play.

Rollerdrome is an easy recommendation because what you get is exactly what is advertised. In a world of skater arcade games with glossy gimmicks, this game takes that of gunplay and makes it a slick, ultra-immersive experience that is complimented by the addition of a story and a sci-fi world that is nothing revolutionary but also likely isn’t the reason you’re here.

Recommended
Diversity of enemy types
Everything is fluid and fast
There's window dressing in terms of story and art, but it works
Music underwhelms