It was almost a decade ago that Cellar Door Games burst onto my PC and millions of others with a game that arguably changed the industry. After checking in a couple of times in its two-year early access run, I am confident in saying that Rogue Legacy 2 is a sequel that is not only a blast to play, but builds and improves upon its predecessor in every way.

Similar to the first adventure, Rogue Legacy 2 throws you into the middle of a dungeon diving story with generations of history and a mystery full of personality and great writing. I don’t believe you come to a rogue-like adventure game for the story (initially I didn’t), but I quickly found myself reading every last bit of lore and speaking to every character, so I dig into the witty, charismatic writing at every turn.

Just like the first game, Rogue Legacy 2 allows you to dungeon dive and slash your way through baddies and bosses with what feels like an endless array of heroes. The class system has been expanded to everything from a Boxer, to a Ranger, Assassin, and even a Chef who waves around a hot pan that burns enemies. All of this creates a wonderful chance to play this game for hours upon hours without feeling stale. 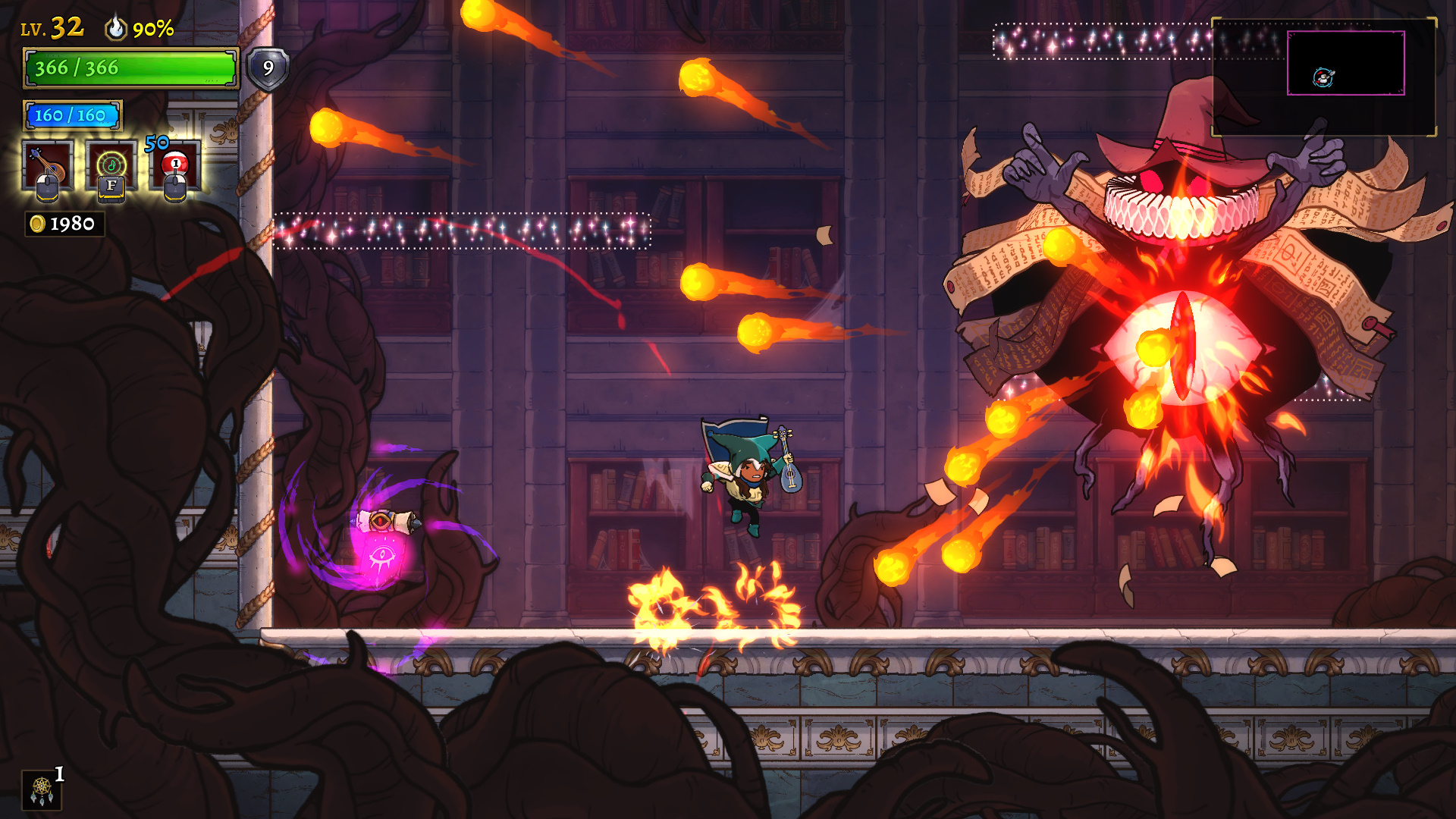 The gameplay loop in Rogue Legacy 2 is largely unchanged; you pick a class and new heir (one of three characters), and you begin your journey to collect gold and see how far into the world you can go. Crafted stages and areas with randomized order give the game a procedurally generated feel that always keeps things fresh with a wide variety of battles and platforming no matter if you turn left, right, up, or down towards the next screen. Those are the basics, but the game goes much deeper than that.

For starters, the aforementioned heirs become more and more diverse and in my experience, increasingly more fun to play. Each class has its own skill, along with a randomized spell that can range anywhere from a shockwave to a fireball, a poison spore, or a magic 8-ball that bounces around the screen. On top of that, there is a random assortment of traits that could be as simple as your heir being really small or large, and others that will either give you a boost or create a more difficult new run.

And this is just a fraction of the setup for each run in Rogue Legacy 2. The castle and hub-world are massive this time around, with a bunch of characters and unlockable skills you will slowly accumulate the more you play. It can seem daunting at first, not knowing where to put your gold or where to focus your time, but after a few hours I began to tailor some of my earnings to my typical playstyle and things felt manageable. 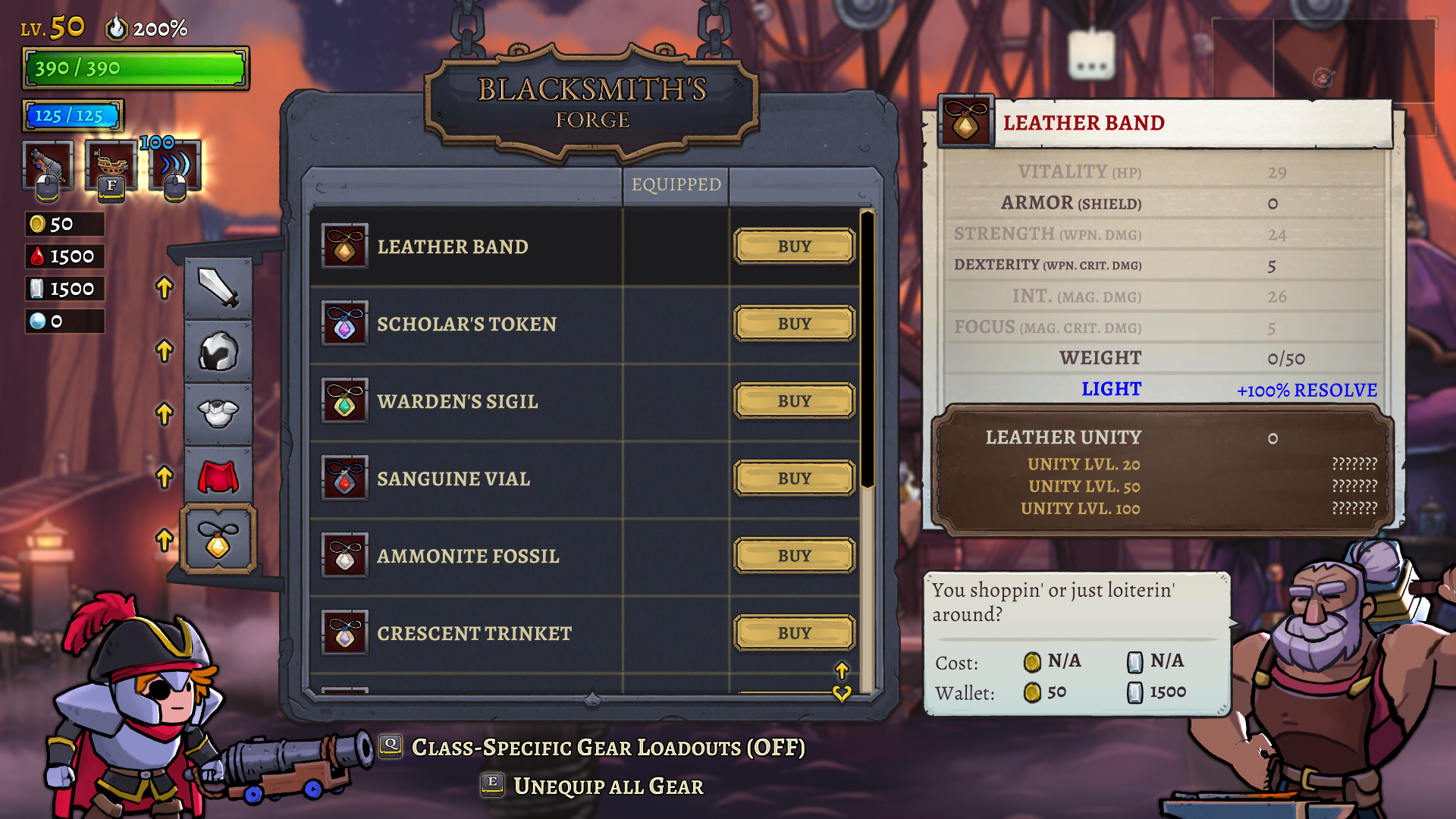 Once you dive into the gameplay itself, it’s time to put your investment and skills to the test. Rogue Legacy 2 is a very tight game; it feels like the two years of early access and beta testing through the Epic Games store really paid off. I have sunk over two dozen hours into the game already and I have never felt like I was cheated or like the game was unfair. The difficulty progression matches perfectly with the progression at your home base and your growing skill level. This is an impressive feat as you every-so-often also unlock skills like double jumps and dashes that require more twitch-like reflexes. They’re not only fun to use, but essential in later stages.

If you played the first game, you may recognize some of the enemies. But now, everything feels and looks smoother. From the traps firing arrows at you, to the biggest boss imaginable, it all still feels approachable. When I failed a run, it was never the game pushing back at me, it was just a learning experience, and that’s what you want from a rogue-like dungeon crawling game. Your death isn’t a failure, it’s an opportunity. What also feels great is that each class has its own feel, pros and cons, and never feels like the wrong choice. For example, I initially didn’t see how the Gunslinger or Bard were at all effective, but after a couple of short runs with each, I found what made them just as special as the Barbarian or Valkyrie. 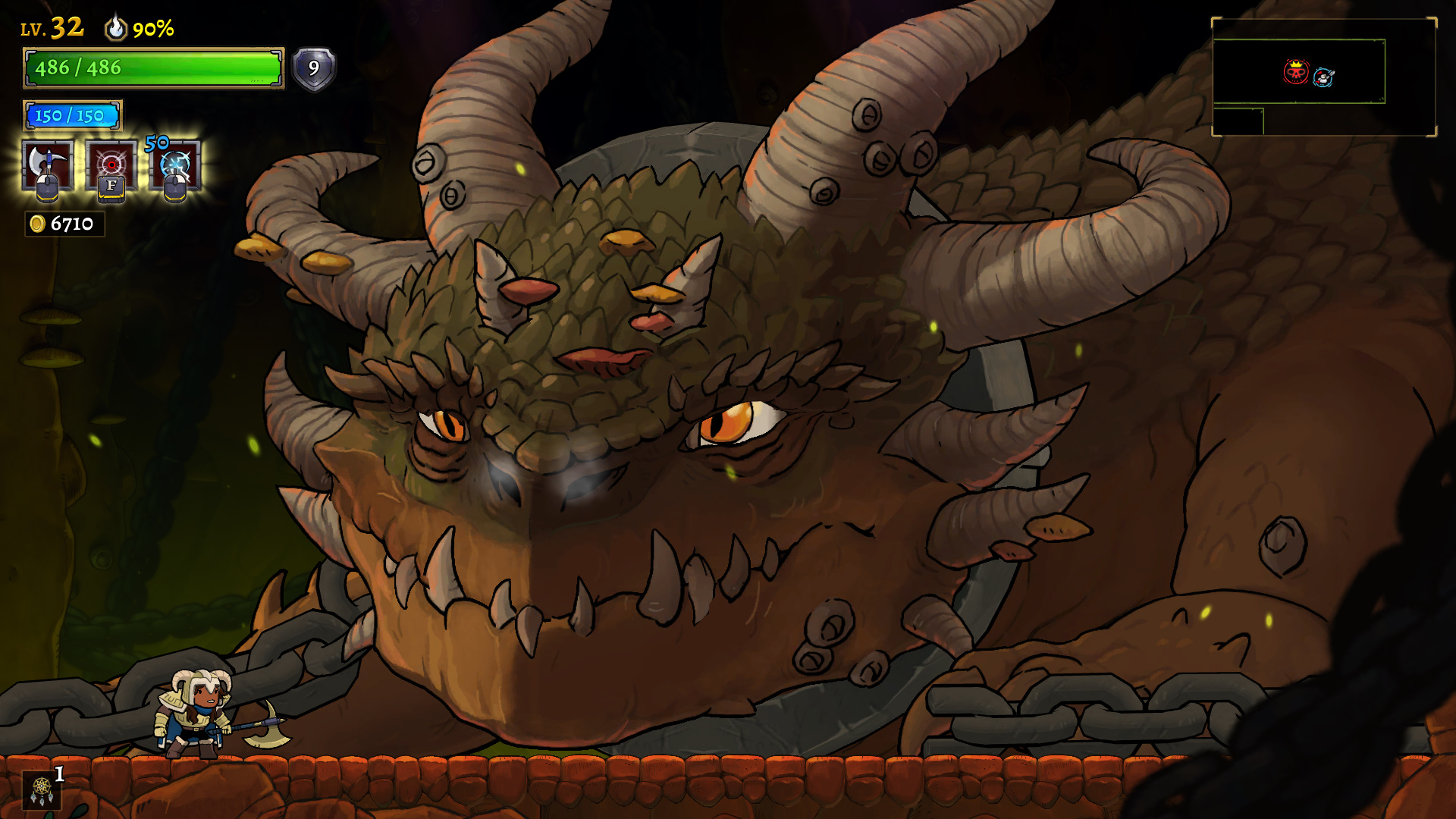 Rogue Legacy 2 may have some of the best gameplay loops available today, but it also looks and sounds amazing. One look at the game you can see the love that was put into this title. Cellar Door Games has outdone itself with a cartoony look that looks like you’re playing a children’s TV show. Every character whether it be the Blacksmith or the smallest enemies in a snow-covered forest is drawn and brought to life with eye-catching visuals outlined with thick black lines commonly seen in colouring books.

It doesn’t just help to see what and who you’re fighting in Rogue Legacy 2, audio cues are also important. Without even thinking about it, I instinctively knew that sound that dozens of enemies made before they were ready to attack. This not only helped me become a better player, but it’s also a clear sign of great sound design. On top of that, I’ve been humming and bopping my head to the background music for days now. It does its job in every area of the game, creating an atmosphere that’s enjoyable even if the current run was cut short by a floor trap you happened to miss while dashing towards a chest of loot. 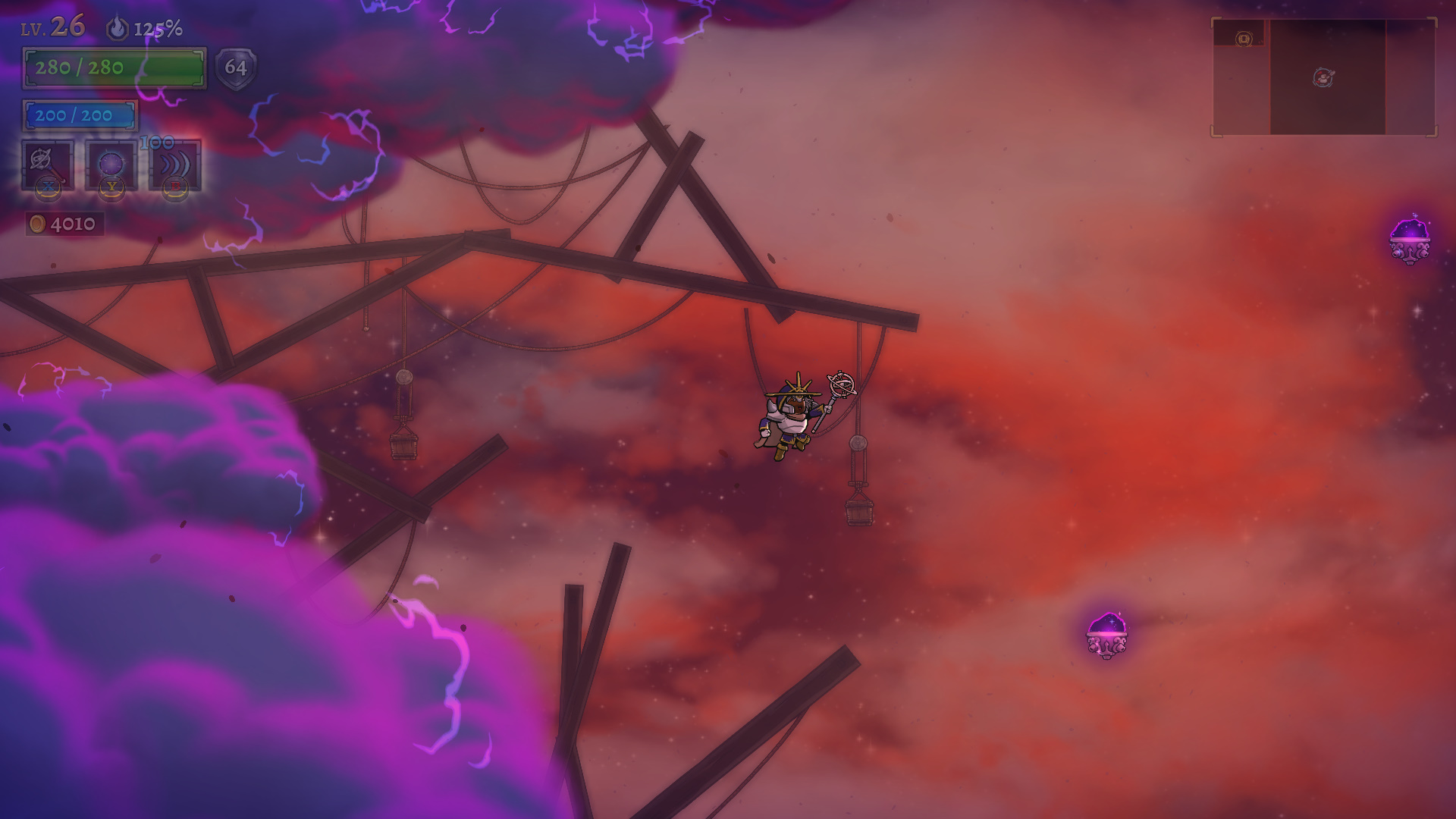 Simply put, Rogue Legacy 2 is an amazing game. Sure, the difficulty and sometimes repetitive dungeon crawl early on in the game may not be for everyone; but I assure you it’s well worth the investment. The game is a near-perfect example of the difficulty, progression, and skill working hand-in-hand to provide a rewarding experience each time you start a new run.

If you’ve played the first, Rogue Legacy 2 is a no-brainer. If you haven’t, it still is. Cellar Door Games has once again created a game that I’ll be thinking about for years to come.