I’ll be honest: Riders Republic is one of my biggest surprises this year!

Over a decade ago, I was playing games like Tony Hawk’s Pro Skater, Mat Hoffman’s Pro BMX, Dave Mirra Freestyle BMX, Pilotwings, Shaun White Snowboarding, 1080° Snowboarding and other similar games. Why am I telling you about these old games? Because they marked my childhood and the experience was so powerful that even today, I am in love with these games and the nostalgia is still there!

Riders Republic is a blast

If you don’t understand why I’m telling you about these games, then let me explain it to you by telling you about Ubisoft’s newest game: Riders Republic. Not because it manages to transport me back to when I was young and carefree, but rather because it rekindles the nostalgic feel without reminding us that “those were the good old days”. 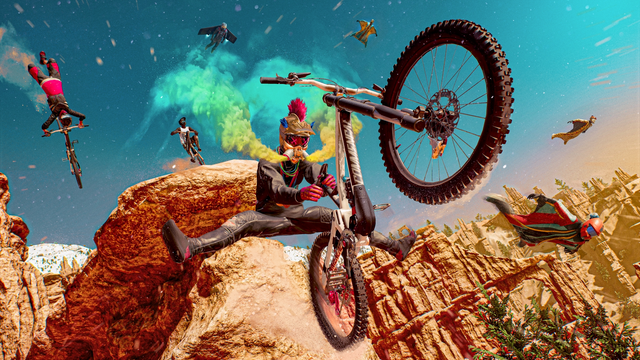 Imagine the feeling of riding a bike or hitting an incredible snow-capped peak on skis or on a snowboard, or even hovering a few feet above the ground and more. This is what awaits you in Riders Republic and its extreme sports arcade game which, I think, is a great success. Infallibly blending the adrenaline of high-speed descents with the full control you can have over your character and gear, you’ll have a blast doing a 720 Can-Can followed by a Suicide No Handler and a Superman after racing down a hill at 130KM/h that will take you up a 90-degree ramp. With the ability to play over the shoulder view in the third or just first person, this is definitely the kind of game I would see in VR on an Oculus Quest 2 or on PSVR! 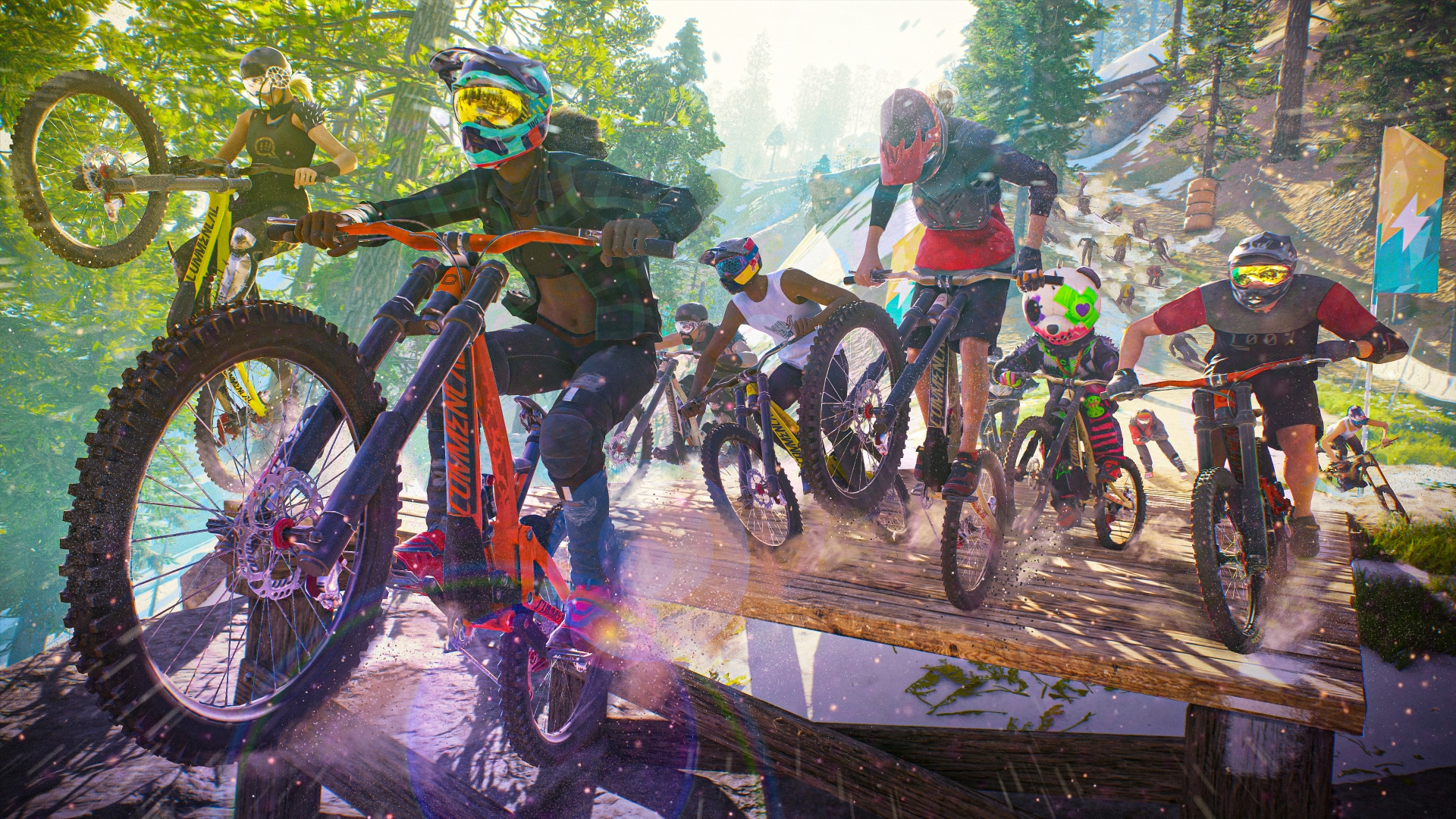 Honestly, from the first few minutes that I took control of Riders Republic, I almost intuitively forgot that the game offers something else in its gameplay, including reward levels, collectibles or stuff to find here and there. All that mattered to me was to equip myself with the new racing gear that was offered to me and return as quickly as possible to races and tricks to get the highest score or to achieve all-star goals.

Have its surprising view of the American national parks of Sequoia, Yosemite, Bryce and Half-Dome all combined in one and only place, you will be entitled to a breathtaking visual on superb craggy backdrops, snow-capped peaks as well as rivers and lakes as far as the eye can see. 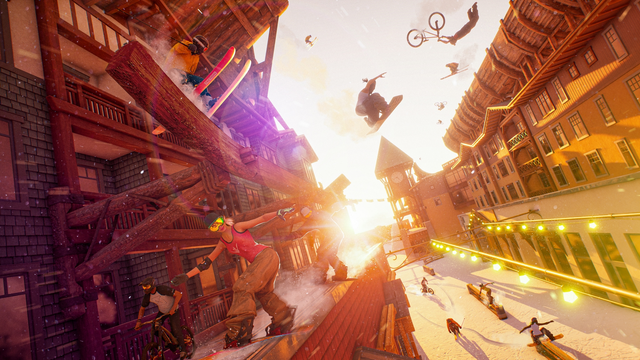 At first, I thought it was exciting because it was so new, so beautiful. But after more than thirty hours of play, I can confirm that the feeling of pleasure and adrenaline is still present and completely intact. You are going to have to face all kinds of situations, ranging from simple races where you will have to make a very tight turn and whose skidding will come to deafening you as the wheel will rub hard against the ground, then chaining you down a downhill slope filled with trees and natural debris like rocks or stumps, to then catapult you over wooden bridges that will let you fall a few meters before relaunching you in a frenzied descent.

Really, this is the kind of game that once you’ve pulled off a race or event and finished first on the first try, you could very easily shout a big “YES! I’m the best! In your face!” in your living room! 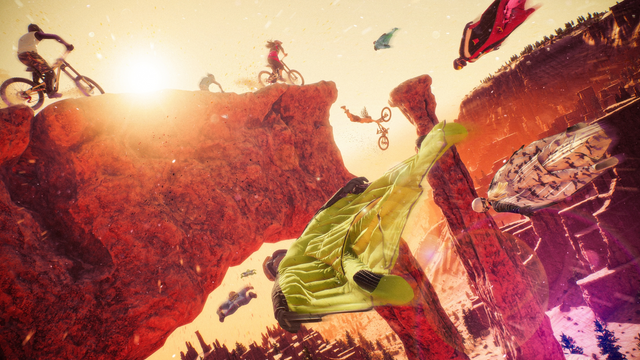 Yes, I talk a lot about downhill biking, but know that it’s just that these impressed me enormously because, after all, Riders Republic is:

Visually, the game is superb and rich in colour, detail and offers something vast. In terms of the soundtrack, the music is just as superb as the sound effects too! Besides, I offer you a quick little hint: set the volume of the music to zero, deactivate the HUD from the “Accessibility” section, place the camera in the first-person view, place your headset on your ears and get started on a track! You will be surprised to hear everything that is going on around you, including your character’s panting, rocks, cracking branches and more. 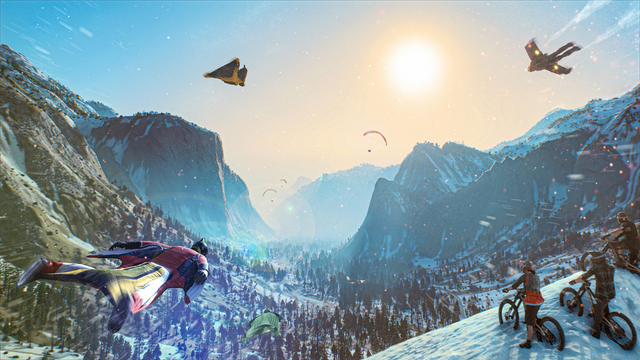 And the level of controls? Well, the controls are sensitive and you will need to react quickly to stay afloat. You have the option of using various controls and assistances to help you but the tutorial will be clear with you on one point: if you want to do great tricks for better score and have better control: your best will be to go for the “Tricks” controls without any additional assistance. 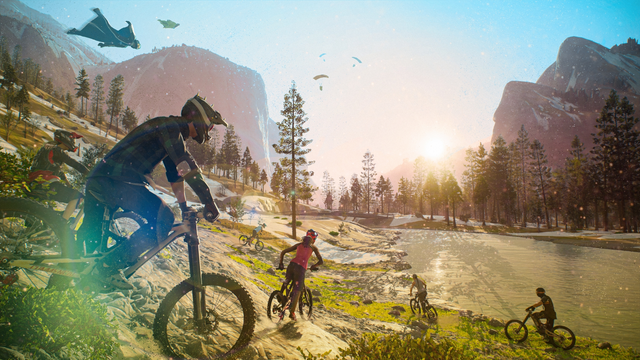 I was scared of Riders Republic because Ubisoft’s previous extreme sports game, Steep, had clearly turned me off. Although the game has an identity conflict as it tries to force itself to be funny, to have a dialogue to talk about events as you progress in your career, and an attempt to make the game deeper than it should really be. In addition, some online modes are not great because, despite a very large number of active players, which you can see on the map and in real-time, it can happen that you find yourself alone at events.

Riders Republic offers you dozens of hours of content with a progression system that will try to win you over but, without realizing it, just the basics of the game and its playable elements will conquer you without any real effort. Riders Republic is like comfort food, is intense and sometimes brings its share of frustration, especially in the tricks that do not necessarily fit as we would like despite great controls or when we touch a camera and the sequential shot prevents us from seeing if we are going to blow each other’s face or not… but, definitely, this game is a real surprise for me this year and I L-O-V-E I-T!