It’s been some time since we’ve had a first-party single-player game on Sony’s console and quite frankly, it couldn’t have arrived at a better time. There are huge expectations here and I know a lot of people are watching to see whether or not Returnal is going to be a breakout hit or a dud for PlayStation. I’m convinced that Housemarque has a winner on its hands but one that may alienate some players due to the difficulty. But it isn’t something I’d recommend skipping on thanks to the excellent gameplay loop enhanced by the power of the PlayStation 5.

Returnal’s Blueprint was Years in the Making

It would remiss of me not to say but Housemarque’s output over the last several years has led to Returnal. The Finnish-based developer has been around for ages but it wasn’t until Resogun that they hit their stride. Over the years, they released Alienation, Nex Machina and Matterfall. Each one of these games the studio developed paved the way for Returnal, you can feel it in the game’s DNA.

Returnal is something the studio has never attempted before, a triple-A third-person that is marketed as the first true PlayStation 5 you need to own. Just by playing the game, I sense inspiration from other series like Hades, Metroid, Dead Cells, and Control. If you like the roguelike genre, then this is certainly right up your alley.

Atropos was the eldest of the three fates in Greek Mythology. In books, death was her specialty. How humans died, using the abhorred shear to cut the thread of life for each human. In essence, that is exactly what the planet represents. Each playthrough as Selene ends differently but the planet decides how you will die, it is up to you to make most of your time before the shears cut the thread of life. 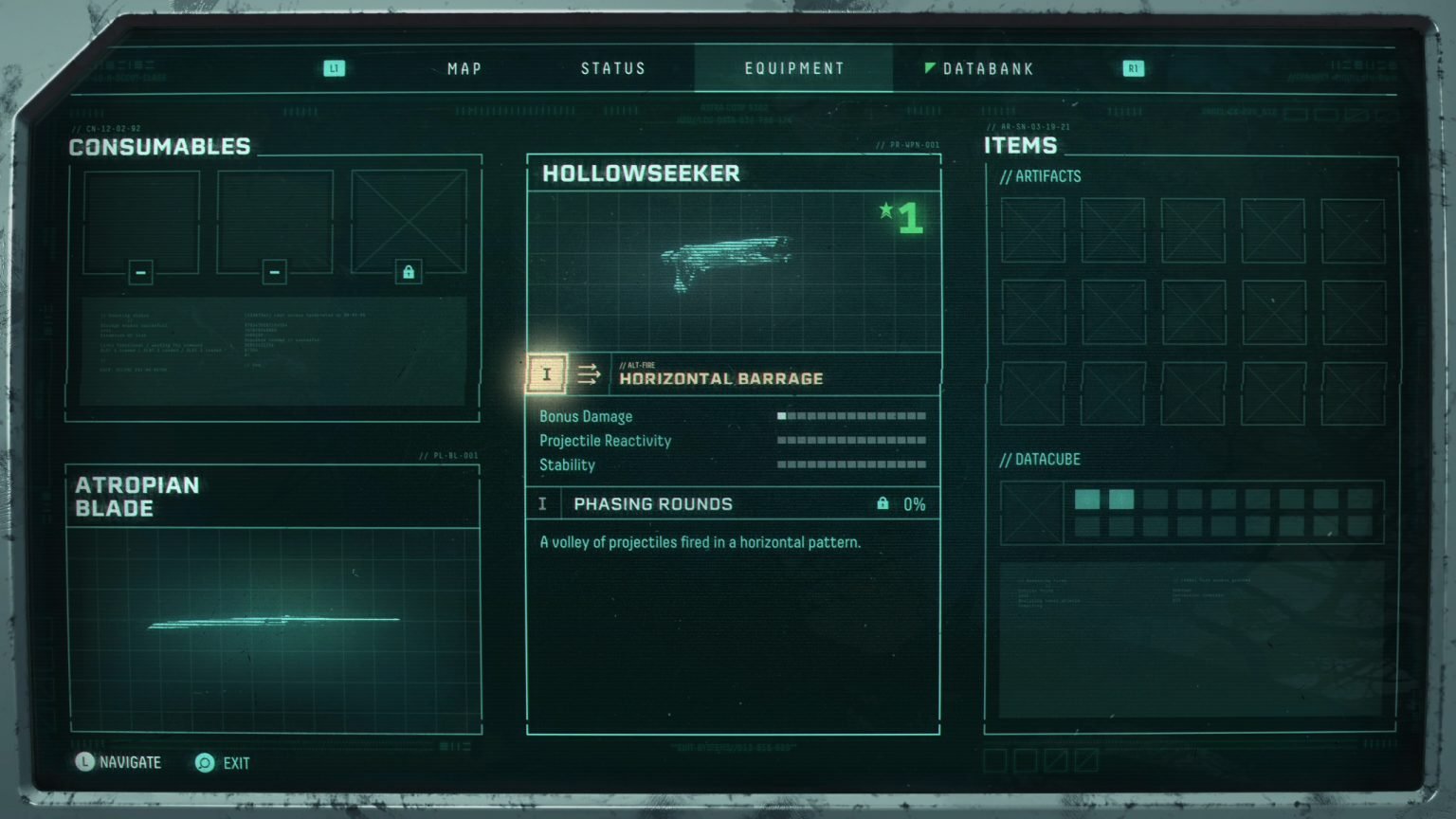 Playing as Selene, the game begins as your ship crash lands on Atropos, a creepy, desolate planet that sends shivers down my spine. You’re alone and isolated from other humans so you’ll need to survive in harsh climates that will push you to your limits. With your spaceship Helios in pieces and Selene without her pistol, the only option is to get out and explore your surroundings.

As I move through the unknown in front of me, this sense of uneasiness will not let up. It’s clear the studio took inspiration from the Alien films and at best, I can describe Returnal as the perfect companion piece to Ridley Scott’s franchise. Exploring Atropos feels like something out of Prometheus and the statues and buildings draw inspiration from H.R. Giger, it’s hard not to see the similarities but it’s also easy to be creeped out by them. 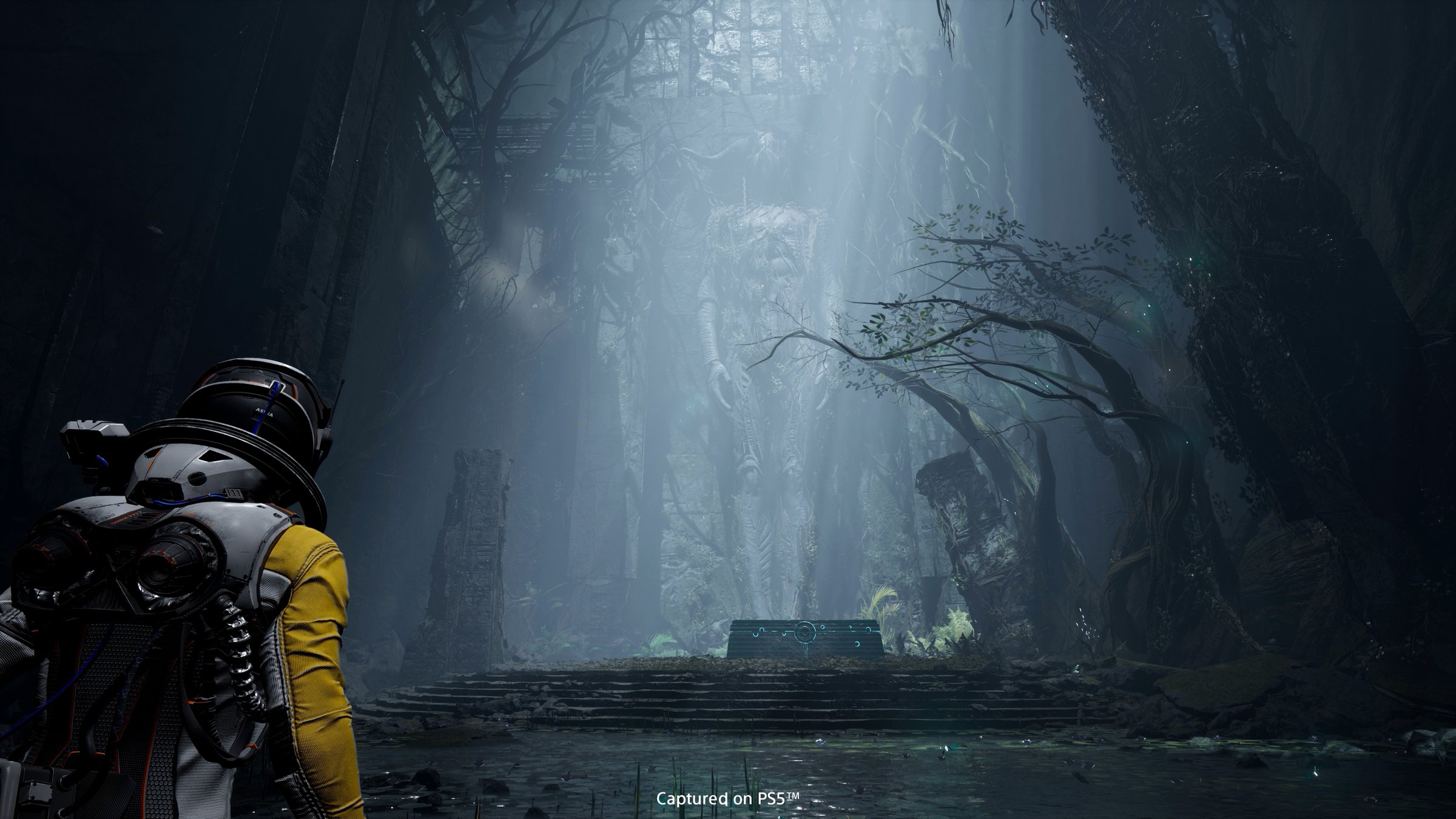 Death Is the Road to Awe

This is a game with death as a theme, and because of the roguelike elements, each death comes with changes to the planet that force you to change your strategy each time you restart the time loop. The one good thing about restarting the cycle is you’re presented with different weapons and combinations to approach a situation each time you start over. I haven’t done more than a handful of loops so far but they feel varied enough to keep me invested.

Enemies in the short amount of time I’ve spent on Atropos feel varied and otherworldly in appearance. Many of these bizarre beasts that spew bullet-hell style attacks are often brightly coloured and powerful. Keep your wits about you as enemies are ferocious and will overpower you if you let up at any time, but with each death, you learn something about them. Aliens fire bullet hell spirals at you that need to be dashed around or through, keeping you guessing on what’s coming your way and it’s often exciting figuring out how to eliminate a barrage of colourful bullets speeding your direction. Combat is tight and smartly eases you into the fray. You begin with a pistol but gain access to better weapons like a shotgun and carbine rifle. You’ll gain proficiency by killing enemies and levelling up your weapons. There are 10 base weapons and more than 90 Weapon Traits that have 3 levels each and 10 alt-fires. You’re only able to carry one weapon in addition to your melee, and a lot of fun is experimenting with weapon builds. Ammo is never a concern as weapons recharge rather than reload; pulling from Gears is the active reload mechanic which is such a brilliant way to keep the momentum going when up against several enemies. However, the downside is if you miss that grace period when reloading your weapon, it will jam.

Movement is crucial to survival because threats come from any direction. That said, hip fire is good for reacting to a situation while Focus Aim is better when you have room to breathe a bit. Some enemies have obvious weak spots, so being able to focus on those is crucial to moving forward. Melee is good for when you’re overwhelmed or dispatch an enemy shield, closing the gap is something you’ll need to do to survive on Atropos. 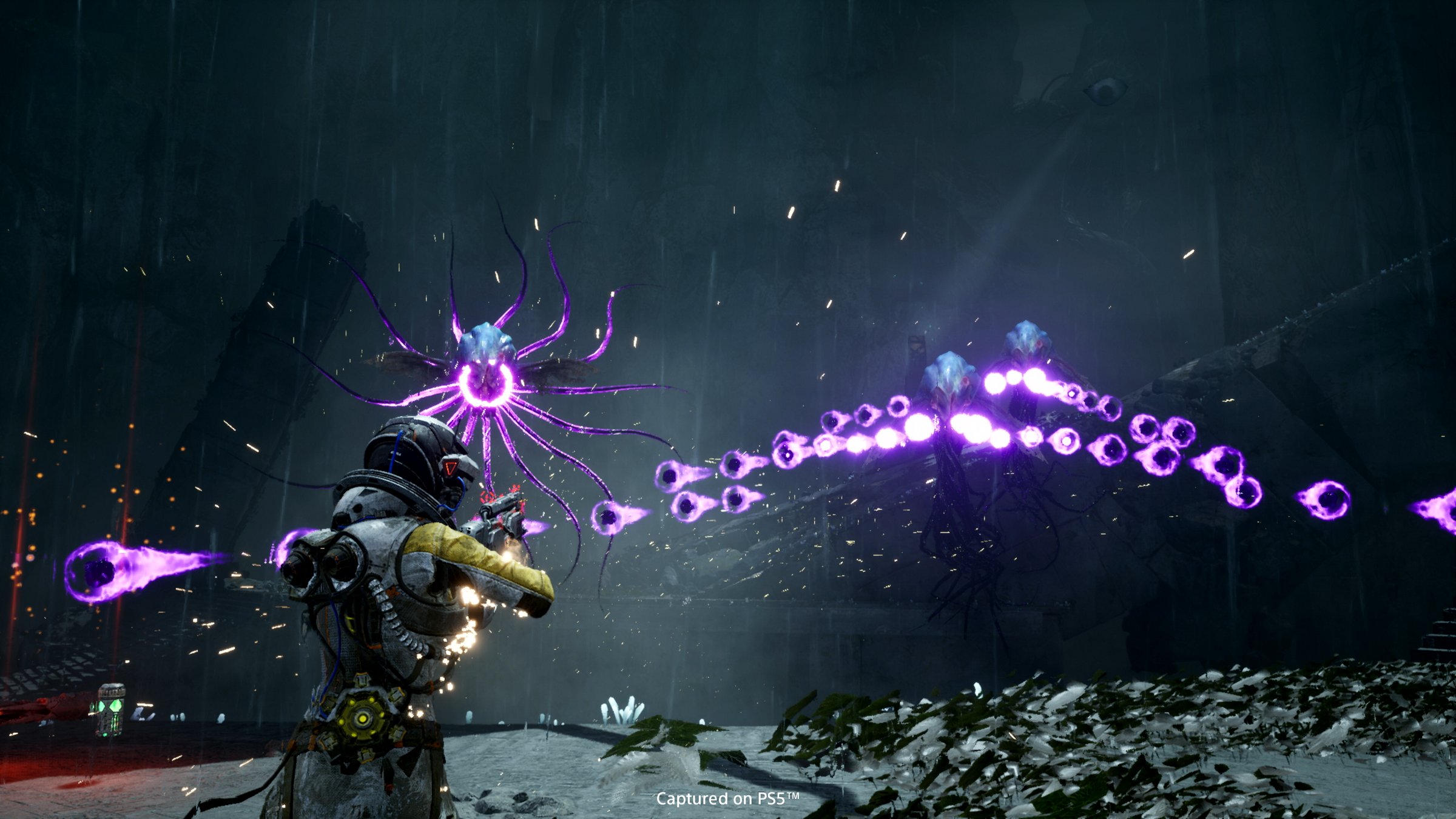 Something I enjoyed was Adrenaline, a mechanic that stacks up to five levels, with each tier unlocking an enhancement. Starting at Level 0, for every three enemies you kill, you increase your level, leading to increased weapon damage, marking enemies, the amount of damage your Atropian blade and so on. Activating the streak isn’t hard but keeping it is where the difficulty lies, taking damage resets the streak.

Weapons, artifacts, and resources are lost when you die. You return to the Helios crash site each time you die and the only thing that continues forward each playthrough are your weapon mods and Databank scans. Returnal requires a lot of scanning and it’s a great way to learn more about the planet and the fauna on Atropos. Scanning new weapons, items and clues left behind from a native civilization builds the narrative, helping piece what’s happened on Atropos. This mechanic helps understand the world better and expands the map and I found this to be reminiscent of Metroid, where you’ll return to earlier areas with the right alien technology to get to those hard-to-reach places.

Parasites are found all over Atropos and affect your suit differently. Some may be beneficial; others even prevent death. Each parasite has unique buffs and debuffs but there’s always a positive effect paired with a negative effect.  The Oily Sagetooth parasite increases proficiency rate by 20%, Malignant Silphium repairs moderate damage to health integrity but it is ineffective Malignancy. You can cleanse these with Ether, a collectible resource but the risk/reward is up to you to decide whether it is worth expending it. Malfunctions are various ailments you’ll need to overcome on Atropos. Each run randomizes the conditions you’ll face and you’ll encounter ailments like Max Integrity Reduced with the condition to remove it asking you to collect an artifact. Other ailments include damaging Selene when she unlocks a door with a key and to remove this condition, you’re required to collect 100 Obolites. A lot of what Returnal comes down to is the luck of the draw, without the proper pieces to get you into the next area, it’s much harder to succeed compared to a run with all the right upgrades.

Furthermore, as you move between each biome, there will be Xeno-Archives. The Xeno-Archives offer glimpses of the Atropos’ history as featured as holograms across the map. Each hologram pieces together the backstory of Returnal with Xenoglyphs remnants of the native language carved on walls, monuments. With each one you discover; you begin to understand the language and learn what happened to the planet. 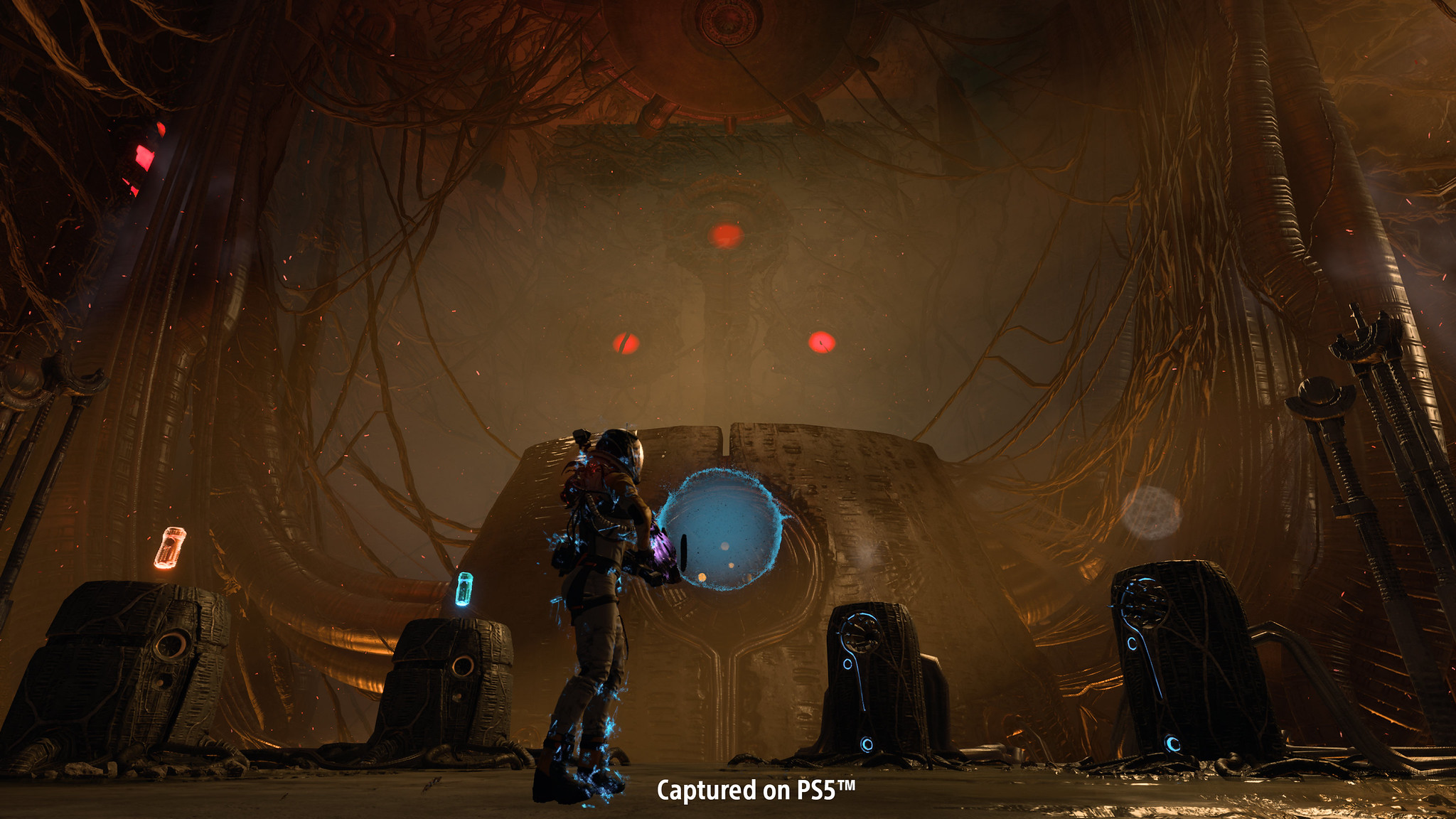 Speaking of piecing together the story, much of this is done by collecting audio logs from previous incarnations of Selene. The first few are haunting as you find them because of Selene’s reaction to hearing herself speak and not remembering having said anything on the recording display the perilous nature of Atropos. It’s also where death as mechanic comes in – as you die and come back for another run, you find audio logs that flesh out much of the backstory and mixed in with weird flashbacks of Selene’s past, things get uncanny. By using this backseat method of storytelling,

Housemarque worked with Sony to nail the Tempest 3D audio and DualSense implementation. From how the subtle rain hits Selene’s suit and resonates with the controller, to the way the controller vibrates when you discover a new item, or when a parasite leeches onto your back; each function adds a level of immersion and something I’ve been keen on more games adding to their offering. This is the first true exclusive that fully uses the PlayStation 5’s features. The PlayStation 5’s 3D audio helps when threats lurk around you, with directional audio guiding you to the next enemy. 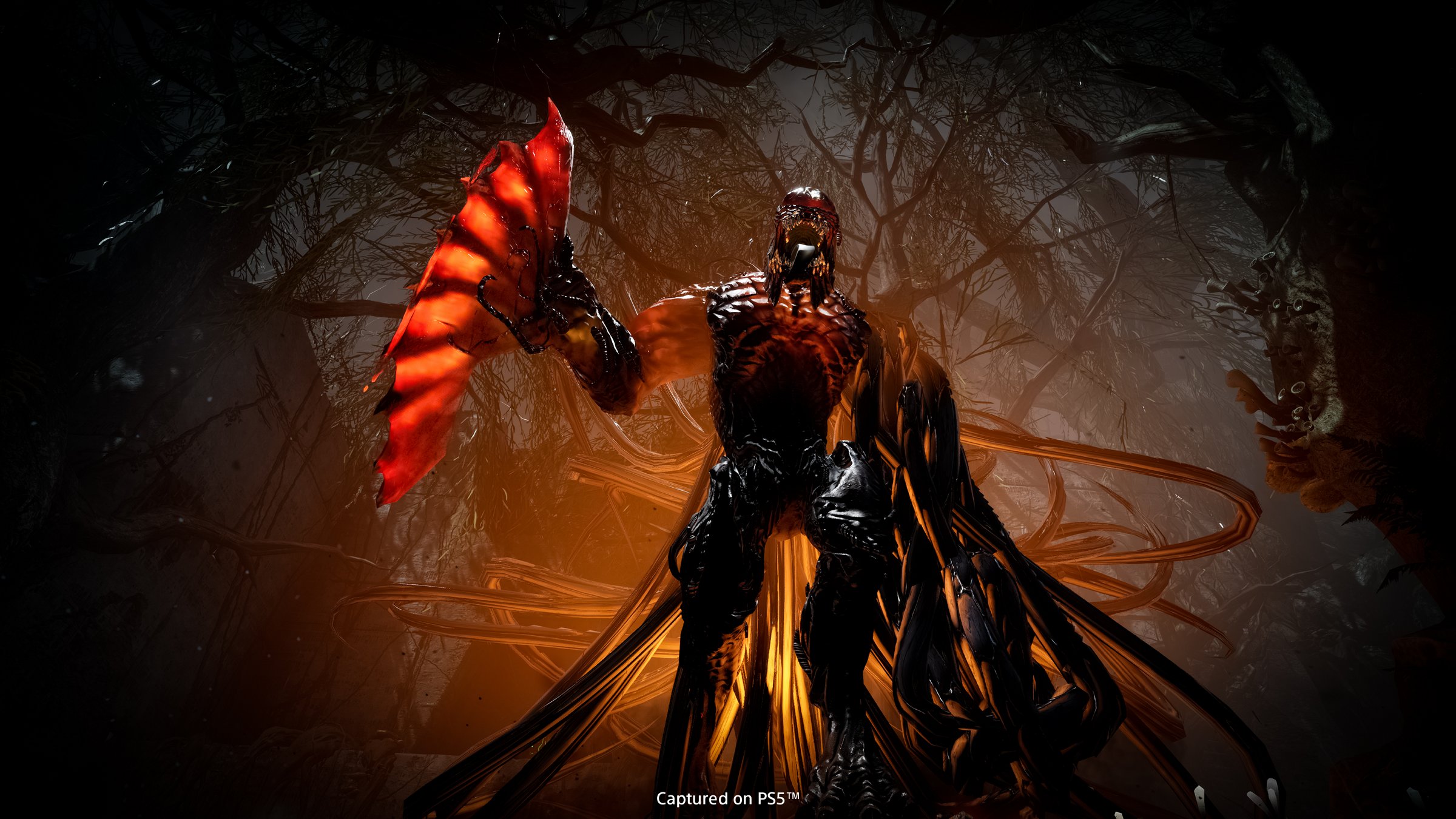 Most games have a designated button for a weapon’s alt mode but Returnal smartly uses the Adaptive Triggers to activate it. By pressing the L2 button down halfway, your weapons tense up and triggers the alt mod of your equipped weapon, the second you go further than halfway on the L2 button, your weapons begin blasting out a secondary fire. Alt-fire weapons all have their respective cooldown periods you’ll need to keep an eye on.

And being the first true exclusive means that Returnal is absolutely stunning. The leap from last-gen to what I’ve played is astounding and bolstered by the lighting-quick SSD powering the console, this is easily one of the most impressive titles on Sony’s new console that fully utilizes the system’s potential. Areas are highly detailed and when you’re in darkened area and enemies appear, their mesmerizing colours really showcase the power of the PS5. 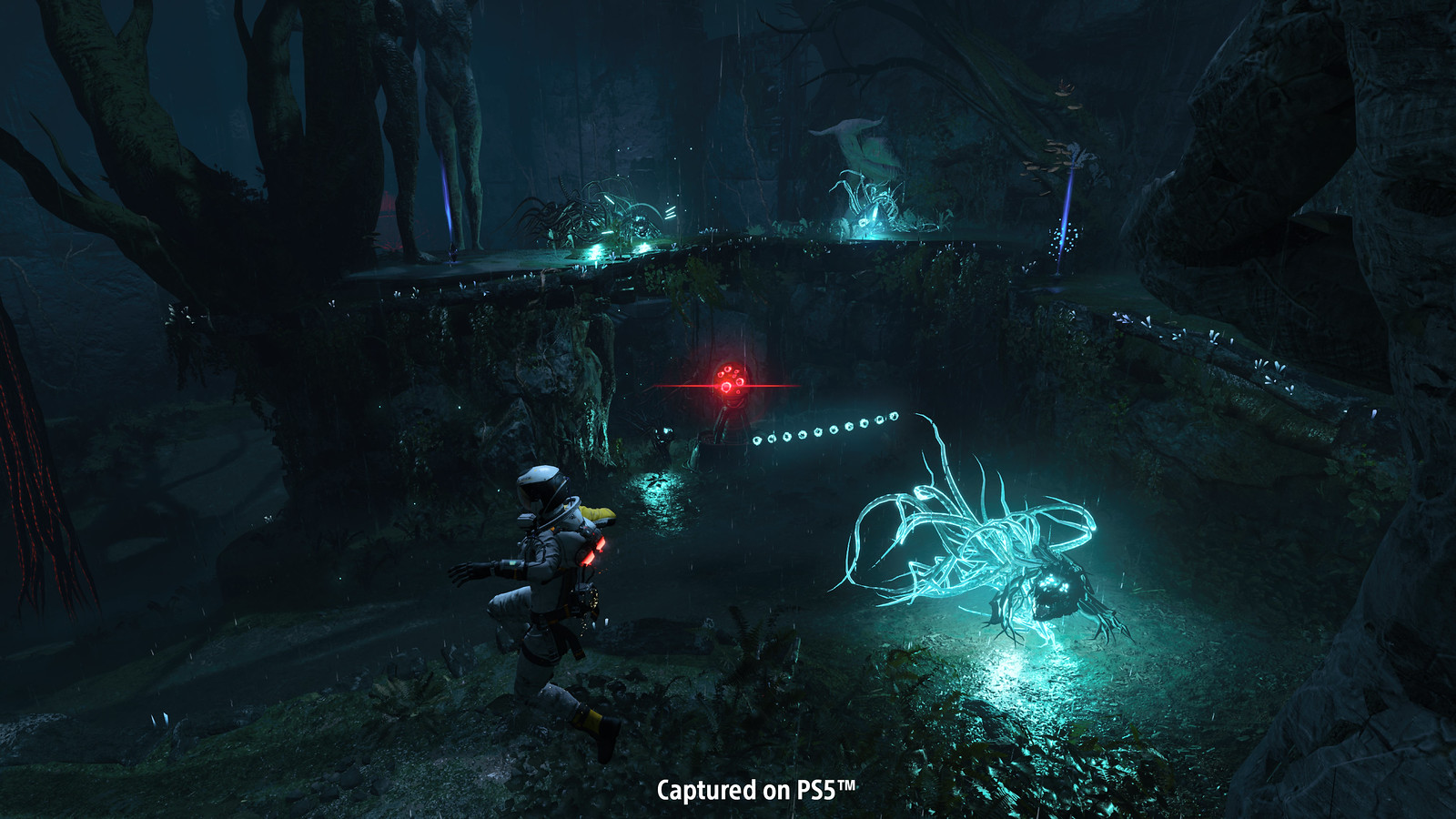 There are very few things that brought the experience down while I played Returnal. I wish the developers took notice of how Dead Cells allows you to save between areas or returning to the Helios. Maybe save scumming was something the developers worried about with Daily Challenges being offered, but I’d happily trade being taken off the leaderboard to be able to save. As it stands, the only way to save is to put your console in sleep mode and if you want to play another game, you’ll need to quit without saving.

However, the way Returnal is that when you clear a biome but die in the next one, you still do return to the Helios, but the layout is retooled so that getting to the next area is less of a nuisance. And while I never really thought the first three biomes were that challenging, from the fourth on, the challenge increases. When you reach the fourth biome, the game will then allow you to continue from that point instead of having to work through all three previous biomes.

Returnal is our first look at a truly next-generation video game and Housemarque delivers a thrilling experience. Returnal offers a satisfying loop strengthened by a sense of discovery that few games offer but the lack of being able to save and variable level of difficulty may prove a tough selling point to anyone who is on the fence.