I would like to start off by saying that I am normally really nervous when it comes to remakes, especially when the original title is a classic! So when I heard that Ratchet and Clank for the PlayStation 4 was sort of a remake, I was worried; I loved the original Rachet and Clank, as well as some of the other titles in the series. Luckily, I worried for nothing, and here’s why!

Ratchet and Clank is based on the upcoming Racket and Clank CG-animated movie (due to be released in theatres 2016), which is based on the original PlayStation 2 game! I know, sounds confusing, right? But it really isn’t, once you start playing. This new game is based on some of the key features and elements from the original game, but also includes more than an hours worth of cinematics, new weapons, areas, bosses, and new features, including card collecting! Much like the original story line from the PS2 version, we meet our heroes Ratchet and Clank; Ratchet, the last known Lombax in existence who wants nothing more to be a Galactic Hero, and team up with his idol Captain Quark, and Clank, a “defective robot” on the run. Together, they join forces to help save the Solana Galaxy from the evil Chairman Drek! There are some alterations to the story, and new additions here and there, but it worked really well with the flow, especially since this is a PS4 title, and not an exact port of the PS2 version. And the fact it goes hand in hand with the upcoming film, also adds to the game, and really does set it apart from other HD remakes; in fact, I wouldn’t even call it a straight remake, and that is definitely not a bad thing! The cinematics were really entertaining too. It was a simple storyline that made for a great adventure, and I was more than happy to be a part of it… not to mention, it was really difficult putting the controller down…

One of the first things I would like to point out is how GORGEOUS this game is! Seriously… absolutely stunning, and especially for a Ratchet and Clank game. Considering the locations and memorable characters within this game, it was so great to see them in they way they were meant to thrive in. Everything from the bright colours, to something so simple like Ratchet’s fur, it was simply stunning! The weapon system was also something to admire. While I was so glad that they brought back classics like Mr. Zurkon and the Groovatron, I was also really happy to try out some of the newer weapons, including the Pixelizer, a gun that when fired, turns enemies into little 8-bit distorted shapes! It was also so rewarding being able to upgrade the weapons, and actually feel like the bolts and Raritanium I collected were going to good use. It was also so much fun just whacking everything with my OmniWrench, and watching everything around me explode into bolts; definitely brought back that childhood joy to the fullest! Now, this new card collecting feature that I mentioned earlier, was easily one of the coolest editions to this title! If you killed certain enemies, you had a chance of obtaining card packs. With these cards, you can make sets of three, which would give you permanent buffs and upgrades for specific weapons. It was also really exciting getting duplicates, because if you had enough per set, you could trade them for more cards. It was a small addition, but it was so well-fitting for this game.

I’m having a really hard time trying to find something wrong with this game, honestly. It would have been fun to have a co-op mode included, but at the same time, its a Ratchet and Clank game, and they only ever had one co-op game in the series, and it wasn’t one of their well received ones (Ratchet and Clank: All 4 One). If that’s considered a bad thing, then I guess they really hit the mark on this title!

Ratchet and Clank is an awesome re-imagining of the original story, and brings back the nostalgia in bright, brilliant high definition; the way it should be! You can grab your copy on April 12th for $49.99, only for the PlayStation 4! 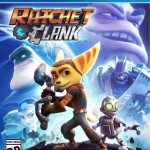