If you told me that Persona would branch off into a rhythm game years ago I would’ve snarled and gone back to playing Persona 4. Here we are, 2015 and I’m reviewing Persona 4: Dancing All Night for the PlayStation Vita. And guess what? It works and works really well. Looking back the super catchy soundtracks and head-bobbing riffs make for a perfect rhythm game. Set shortly after the ending of Persona 4 epilogue and Persona 4 Arena: Ultimax, Dancing All Night continues the trend with a coherent and likable story in a universe teeming with personality.

The Investigation Team has been invited to be backup dancers for Rise at a concert while she plans a revival of her career. Unsurprisingly, things go awry and people begin to vanish into a world called the “Midnight Stage.” Here is where the bulk of the story takes place, battling shadows and monsters through the power of dance. The story mode is set at easy mode so that when you play the story takes precedence. I didn’t mind this approach because someone like me who isn’t totally in sync with the rhythm. All cut scenes are presented in a visual novel style like predecessor Persona 4 Arena: Ultimax and showcases the beautiful artwork. Through the eyes of three main characters, the story unfolds as yet another mystery. A gripe I had was just how much reading I had to power through at times to get to the meaty and intense dance battles.

P4: Dancing All Night also comes with a Free Dance mode which is exactly what it sounds like. This is where you would go to choose your song and dance. This mode allows for songs to unlock as well as costumes and various accessories too. There is an in-game shop that features costumes, accessories and items to use. An issue I had and I’m sure many others will encounter at some point during their playthrough is the colour of the arrows on the screen. Persona 4’s main colour is yellow and there is a TON of yellow P4: Dancing All Night, this will disorient you during a battle and cause you to miss a mark because the arrows blend in with so many other things. When you’re at a 100+ combo and suddenly lose sight of an arrow that causes your combo to reset definitely did not sit well with me. The gameplay doesn’t let you know you’ve missed a beat either – something that would greatly help by either throwing the song off rhythm by throwing an audio cue that there was a mistake made. Instead unabated the song continues to play like nothing has happened.

The music is stellar and not a simple rehash of old songs from Persona 4. While there’re a lot of familiar tracks, there’s an equal amount of well-done remixes and even longer versions of original soundtrack titles. There’s around 30 tracks to master and unlock with DLC available that adds to the count, however, this doesn’t feel like the entire Persona 4 soundtrack has been used.

The story is good enough to fill any need a gamer might have to see more of this infectiously likable cast but does nothing to progress them further and weighs down any chance of seeing something new from them. The beginning while a massive drag to get through trails into a steady and much better-paced story that is Persona gold.

Persona 4: Dancing All Night spins a well-established franchise into another successful spinoff that succeeds in what it set out to do – dance. The lengthy story and amount of extra content deliver a welcome entry into any gamer’s collection and are reason enough to pick up either PlayStation Vita or the PS TV to enjoy this title. Rhythm games be damned – this one is a keeper with a wonderful soundtrack, larger than life cast, and a world oozing with style, Persona 4: Dancing All Night throws one hell of disco party. 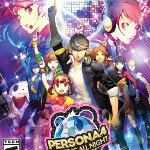