On its surface — in this case, the surface of Mars — Per Aspera is a solid resource-gathering/city-building sim that uses voice and story to make you feel as though an otherwise lonely Mars feel very much less so. A fully voice-acted story will help you go through the motions, while stellar visual effects playout around your decisions and make for an enjoyable 30-hour simulation experience.

A bit of a rocky landing

Per Aspera stumbles a bit in the beginning. There’s not really any tutorial, which seems like a major misstep for a resource-gathering/city-building sim with its own unique resource system and progression tree. Instead, the game begins by throwing a bunch of quick commands at you in the hopes that you’ll begin to follow its rhythm. I found myself cognitively struggling with the relative emptiness of Per Aspera‘s early game, where there was little in the way of interaction with any of the game’s fantastic character or reflection from player-controlled A.I. entity AMI.

As you begin to establish your Mars operation, new members of the mission will land upon Mars and help you to explore, terraform and improve your operation. It’s as these new characters begin to arrive that Per Aspera reaches its stride.

Per Aspera features a full-voiced storyline where AMI functions as humanities’ latest attempt to sustain life on the big red planet. Along the way, AMI will exchange thoughts with members of the mission about what it means to be human and what exactly it means to be AMI? AMI will take ideas from these interactions and ruminate on them as you complete tasks. Players are given a choice to make AMI into a caring, nurturing entity looking out for the mission’s crew. Or adversely, a vengeful and removed virtual intelligence that longs for a human existence.

There’s honestly so much that’s going on in the game at most times that keeping up with AMI’s adventure can be quite the challenge. And while the scripting is quite simplistic aside from some extremely meta ideas about what makes humanity, it does a great job of moving you into the game’s different stages. You’ll begin in a sort of infancy by having a one-on-one with Dr. Foster, your creator. When you’ve grown a little, and it’s time for humans to arrive, you’ll meet an enthusiastic scientist that will endow AMI with a youthful vibrance and excitement. Phil LaMarr captures a visceral warring spirit as a military commander who introduces AMI to the concept of war. And while that storyline works particularly well, the actual combat mechanic is a fairly underwhelming tower defence mini-game. The long and the short of it is that the story does what it was meant to do here to move things along and keep you from feeling alone.

A Martian spiderweb of sorts

Per Aspera is already unique in the fact that its developer, Tlön Industries used actual surface maps of Mars when constructing the game board, and there’s lots of real-world Martian history and education up for grabs while you play. But the most exciting part of Per Aspera‘s physical element is seeing how the somewhat cartoonish Mars reacts to AMI’s efficient and spiderweb-like expansion across its surface.  There is a certain joy in gaining the science to melt ice caps and build lakes in between lush valleys that have become sustainable thanks to well-researched farming practices. On the flip side, there’s a dread to realizing that your cobalt mines that have been active since AMI’s arrival are drilling craters into the planet’s surface. 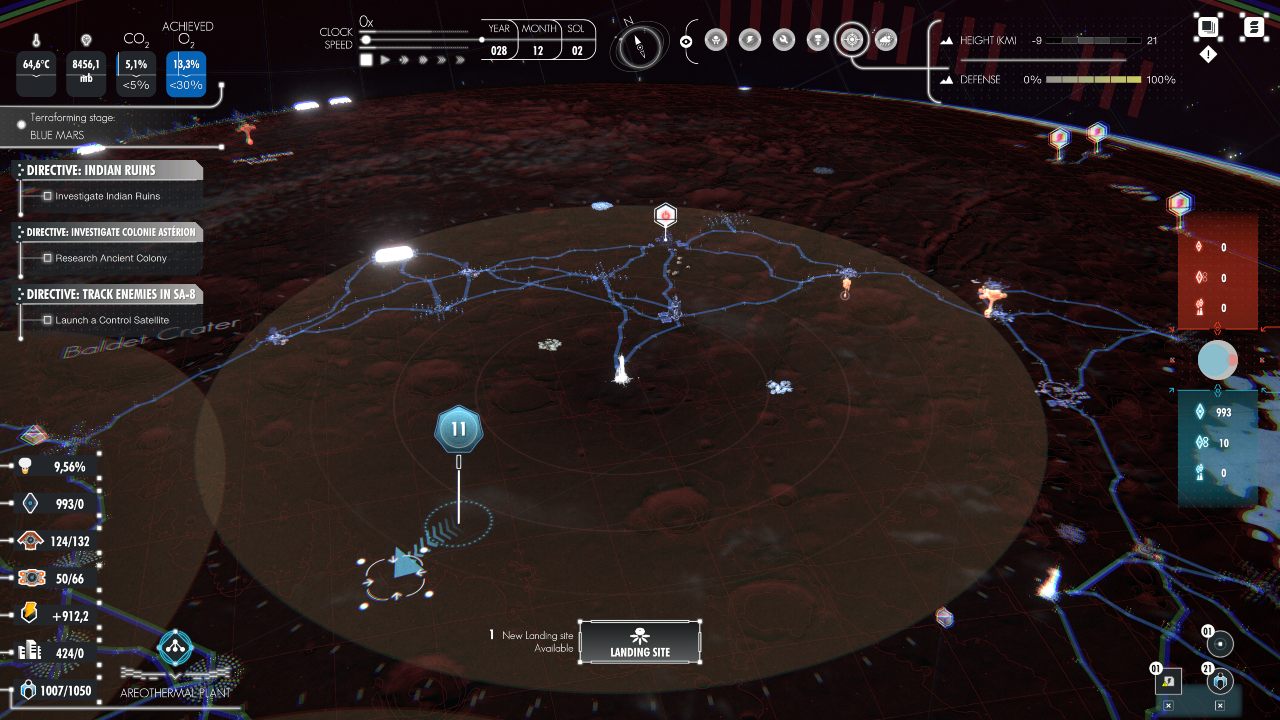 How you tackle the expanse of Mars will determine how far you go in a game that is not afraid to make you start over from scratch. Physical resources have set locations where they can be harvested and all resources need to have a power network and general support infrastructure near them. So as you get into the later game, planning your support networks and power outputs can really begin to slow things down.

I may be really dumb, but as I began to approach the 20-hour mark in my game, I began having to spend more of my time decommissioning old and unusable infrastructure instead of building new ones. I even had one previous instance where I had to quit a run after about seven hours because I had run out of ways to get cobalt. I had no way of reaching the closest source across another crater from my main hub of activity. 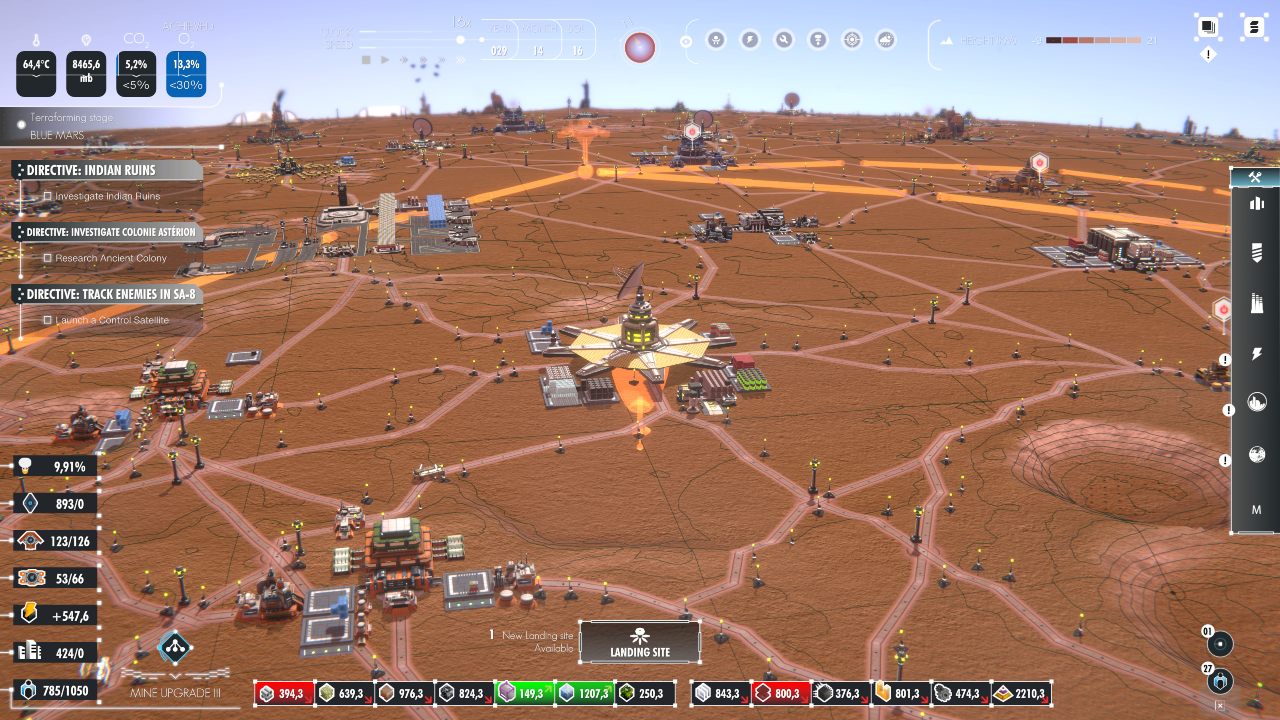 It’s my own personal belief that Per Aspera‘s late-game really slows the experience down. The game gets to a spot where it really begins to test how you use its skill tree and your strategies of collection employment. This is a game that isn’t afraid to tell you that you’ve failed. Luckily, there’s also a robust sandbox mode that allows you to study for the game’s test in a much more forgiving environment!

Per Aspera is far from a completely out-of-this-world experience. Its story is well-acted, but it can at times be incredibly basic and hard to follow in the midst of keeping your focus on all the other things going on in the forefront. But I’m glad it’s there because I wouldn’t want to feel completely alone on this simulated Mars! While both the initial and late-game phases can feel like the drag. There’s a total sweet spot to Per Aspera where you get to bask in the life that you bring into an otherwise arid landscape. Seeing your spiderweb of activity covering Mars is enough to keep you in the game for the 30-40 hours it will take you to complete.