First announced during the Xbox & Bethesda Showcase 2022, Pentiment was shown to gamers as a smaller-scale narrative-driven adventure set in the 16th century. The story follows a Bavarian painter, Andreas Maler, who gets wrapped up in investigating a series of murders.

I wasn’t sure what to expect when Pentiment was revealed in June, but it had an eye-catching aesthetic from one of my favourite developers. It was also easy to miss because the showcase featured so many interesting games. Thankfully, everything we’ve been shown so far has been enough to keep the spotlight on this project, ready to toss a coin to your local bard. Developed by a team of only 13 people with Josh Sawyer at the helm, Pentiment proves bigger isn’t always better when it comes to scope.

To Bavaria, With Love

Taking place in the Renaissance period of the 16th century, in the town of Tassing in Bavaria, the entire premise of Pentiment is all-out narrative who-dun-it, navigating from town to town to chat with townspeople and completed minigames-like quests every now and then, like a point-and-click minigame of hanging portraits on an old widow’s wall which will ask you to break a crucifix on the wall because she is enraged to have lost her husband. Will you break the crucifix as she asks, or will you decline? This decision will be yours to make and yours alone.

To make this an intimate experience, Pentiment features a high level of detail with each character in the village boasting an original backstory. Andrea Maler works in the scriptorium of Kiersau Abbey, surrounded by monks, Maler continues to work on his own project.

Pentiment Is A Project Made With Love

Pentiment takes about twenty hours and in a twist, never outright reveals the murderer. It is up to the player to accumulate all the clues and follow all the leads to make a final Fortunately, Andreas’ diary gives us a short summary of each character and how they fall into the bigger picture.

If you can get through the opening hour, you will find a unique murder mystery. Although this is not Obsidian’s normal output, Pentiment showcases the studio’s DNA. The narrative is complex with many twists and turns, and you can quickly get lost in everything that is going on in parallel with the main story. There are several conspiracies around the murder and characters who act suspiciously. Moreover, this is what can prolong the story a lot and, overall, is excellent.

You soon notice that some of Pentiment’s dialogue choices can have an important impact. I have in mind the character of Martin, who is a bit of a lunatic and with whom I had an initial heated conversation. He wanted nothing to do with me afterward. So when he runs away from what seems to be the scene of the crime, he ignores us completely. With a different conversation, I could have intercepted him and better understood his suspicious actions. The game also highlights when you make a dialogue choice that the script will remember. My conversation with Martin is an example of this. 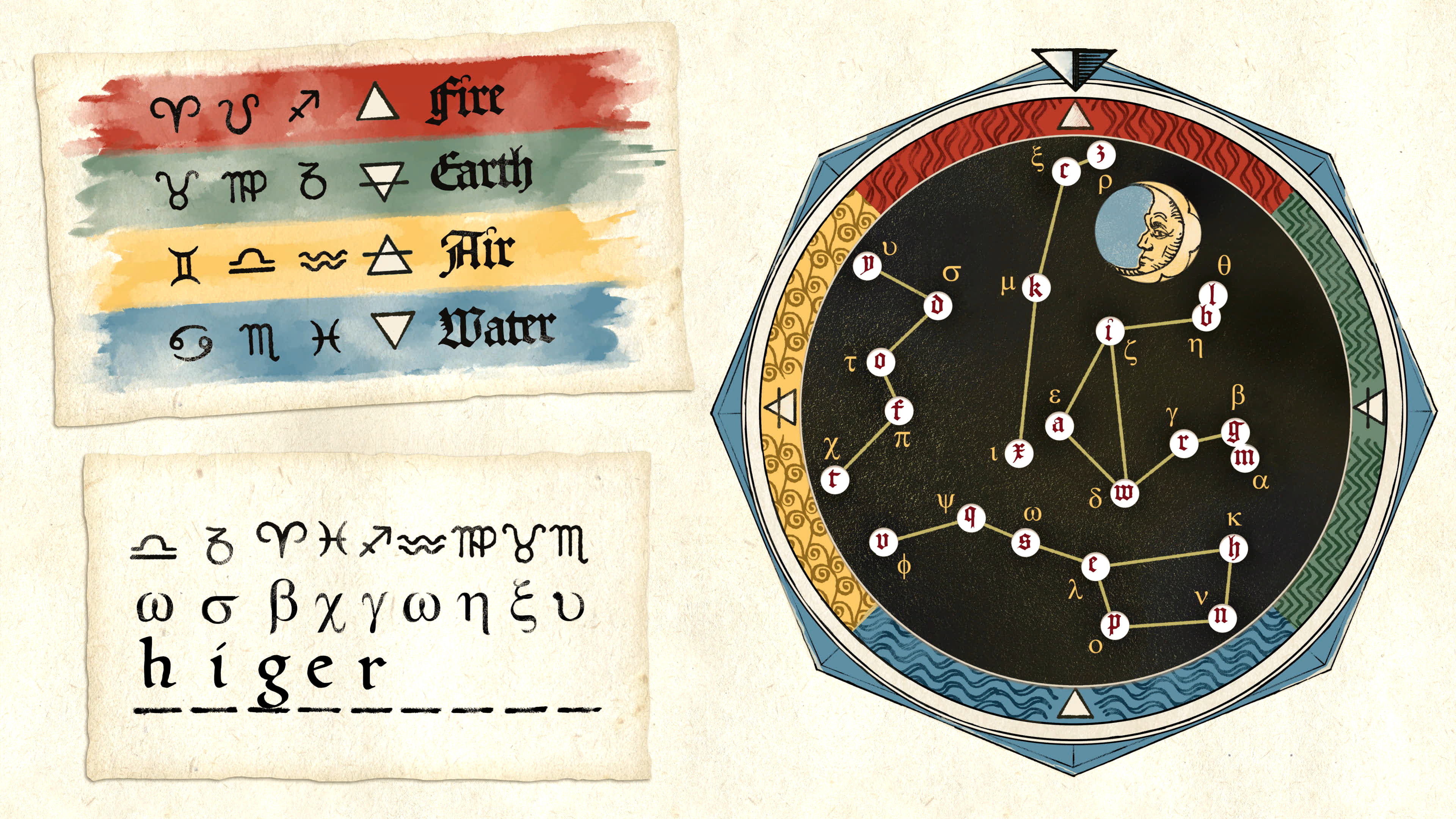 Otherwise, the other element of the game involves some rather simple puzzles. It can be as easy as replacing frames in a grumpy old woman’s house or breaking branches for her. There’s nothing really difficult and it’s clear that the developers wanted to encourage exploration. The village is quite large and there are a few secret corners you can explore to further the narrative. For me, it was very rewarding and satisfying for the player.

Who-Dun-It? I guess you’ll need to find the clues

Pentiment is based on Pentimento, which translates to “An underlying image in a painting, especially one that has become visible when the top layer of paint has turned transparent with age, providing evidence of revision by the artist.” This tidbit plays directly into Pentiment’s aesthetic as largely everything looks as if it was pulled directly from manuscripts.

It’s a unique look that you would get by visiting old churches in Europe and it’s impressive that the developers were able to convey this. Obsidian also opted for period-style calligraphy to further immerse players in this universe. It can be a bit difficult to read, especially since there are several styles of writing, and some are less legible. I wasn’t sure if I would like it at first, but it quickly becomes a non-issue.

Pentiment is unlike anything you’ll play throughout the rest of the year and well into the next. Some may fall off in the opening hours and understandably, this is a slow-burn experience that requires patience. However, all that patience paid off in spades as you learn that your decisions have consequences, and each choice is going to be costly in the grand scheme of things. You’ll also learn that this village, these people, and their lives are beautifully realized by the team at Obsidian making this decades-long murder mystery one of the most beautiful and engaging experiences you’ll have.

Recommended
Pentiment is unlike anything you’ll play throughout the rest of the year and well into the next.
Liked
Includes one of the best narratives in 2022
One of the best looking games this year, bringing manuscripts to life
The attention to detail, the historically accurate portrayals and incredible characters
Didn't Like
The first hour is won't be for everyone
Heavily text-based, doesn't translate well for everyone