As I continue my foray into the world of drones, I had the opportunity to try out another from Parrot’s arsenal. This time I took to the skies with the Parrot SWING. Unlike the Parrot Mambo, the SWING is quite large and utilizes two very different fly modes. It’s a plane and a quad-copter. It’s the only plane that has vertical take-off/landing and the only one that is capable of autopilot. Not only that, but the Parrot Swing is able to reach speeds of up to 18.6 mph.

What’s in the Box?

The Parrot Drone comes with a lot more than the Mambo did (understandably as it does cost more). Aside from the drone, the SWING kit includes a USB cable, the FlyPad, a smartphone mount that attaches to the FlyPad, 4 replacement propellers and a quickstart guide. The box was considerably larger than the Mambo’s. Everything was packed beautifully. The big box contained 2 smaller boxes; one holding the SWING drone and one containing the FlyPad. I’m a sucker for opening boxes. The Parrot SWING has a completely different look than the Mambo. The SWING is mainly composed of 4 foam wings forming the shape of an X. The first thing I thought of when I saw the drone was an X-Wing fighter from Star Wars (with a little customization I’m sure that can be made possible). The wings are made of black foam. Two propellers are white, and two are black, much like the Mambo. Another feature that the SWING shares with the Mambo are the adorable little LED eyes on the front. As similar as the two drones are, the SWING does not have the capability to utilize attachments like the Mambo. But that’s ok, because the SWING is a lot of fun to just fly around as you can reach some pretty amazing speeds. As you press the bumpers on the FlyPad, the SWING will lunge either front or back (depending on which bumper you press) and go from quadcopter to plane at a lightning speed. Due to the sheer velocity of this drone, flying it inside isn’t even an option.

I was blown away at how durable this drone is. Being about 85% foam paired with how genuinely reckless I am I thought I would have destroyed it on day one, but incredibly it’s still in one piece with hardly a ding or dent. None of the propellers have fallen off either.

The connection time between the Drone and the FlyPad (or phone app) was considerably faster than the Mambo (and the Mambo connected pretty fast). The drone maintains a solid connection throughout flight so there is absolutely no issue there.

The SWING drone has a built in camera (as a matter of fact so does the Mambo, but it wasn’t really anything special). The camera is located on the bottom of the drone (while in quad-mode), or at the back (while in plane mode). Although the camera isn’t that great, it is very useful for taking pictures at great heights. You’re also able to film in 60fps, which is awesome when you’re zipping around and should look even cooler when you crash and tumble to the ground. To be completely honest, there’s not much I didn’t like about this drone. The only complaint I really have is one that the SWING shares with its distant cousin the Mambo – battery life. As with my previous escapade with a drone, I found the battery life to be rather poor with it draining incredibly fast. Now, this may sound awful but it’s really no issue because there is an option to purchase additional batteries. So simply charge a few of those and you can have a real fun time flying the SWING. Out of the two Parrot drones I tried out (Mambo and SWING), the SWING is by far my favorite, and not just because it looks like an X-Wing. It’s a lot more fun to fly, the battery is a bit better than the Mambo, it comes with the FlyPad, and it’s the most durable (to my surprise). The Parrot SWING currently costs about $160 and is worth every penny in my opinion, especially since it comes with the FlyPad which is about a $60 value and can work with any Parrot drone. The Parrot SWING would make an absolutely perfect gift for that tech nut in your life. 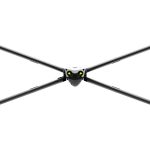