I recently got my hands on the Mambo Drone, one of the newest drones to join Parrot’s line of affordable mini-drones and it was my first exposure to the world of drones and how they work. The Parrot MAMBO Mini-Drone comes equipped with two attachable devices; a canon and a grabber. Take flight and turn the sky into your own endless playground.

What’s In The Box?

As I opened the box I was greeted immediately by the beautiful sight of the Mambo Drone in all it’s black and white beauty. Everything else was laid out plainly so that I could see everything this kit had to offer. The packaging was very clean and ergonomic. The kit included the drone, the canon attachment, the grabber attachment, a pack of bb pellets, the instruction booklet, and a micro-usb cable. The inside of the box looked great. It didn’t look like everything was just crammed in, everything had its own place. The MAMBO drone looks great. It’s white and black with 4 propellers (2 black, 2 white) and is smaller than a standard video game case. Each propeller is protected by a guard to ensure the safety of the drone and humans alike. The top of the drone is adorned with a 2×3 LEGO-like dock for the attachments. The front features 2 LED lights that, when lit up, look kind of like 2 adorable eyes.

One of the really cool features that this drone has is that it can be equipped with 2 different add-ons; a canon (yes CANON) and a grabber!

The grabber’s close and open movements are very fluid and at a good speed. It’s able to carry a good range of things of a variety of sizes and weights consistently and they don’t get stuck anywhere when you let go.

The canon and grabber attachments are very easy to attach and detach and I had no issues with this part of the drone. The drone uses a LEGO-like mounting system for the attachments with 4 out of the 6 studs having special connectors that need to be connected to the drone. Installation is literally as simple as snap it on and you’re ready to go.

The MAMBO drone is capable of doing a nice handful of tricks that would impress anyone. With a couple easy button presses you can perform backflips, front flips, and flip side to side at high speeds. Once I got the drone outside I could finally take the training wheels off and see what this thing was really capable of. It’s extremely fast and can turn immediately on a dime and come to a complete stop. Very impressive.

The Mambo doesn’t feel like the strongest drone but I’d be lying if I said it wasn’t durable. I ran the drone into countless obstacles (walls, doors, trees, cars, people [whoops]) and it never and still doesn’t show any sign of wear or damage.

Luckily I had access to the Parrot Flypad to use with the Mambo. The alternative would’ve been to use the app on my phone, which isn’t half bad either, but for controlling purposes I wholeheartedly endorse using the Flypad. The app does have its advantages though. On the app you can keep track of flytime, the drones battery life, and even activate a feature so that you can throw the drone and it boots up in midair. The drone connects via bluetooth which I thought would be an issue (I’m bluetooth illiterate), but the Mambo connected to my phone or Flypad almost immediately and held a steady connection throughout the entire flight. The drone cannot hover still enough to pick anything up, and even if it could the propellers are so strong they would blow anything the drone would be able to pick up away.

The canon’s firing speed is very slow. In the advertisement video for the drone it is shown popping balloons with the canon, however this is not possible. The canon does not shoot at a strong enough velocity to be able to knock over or pop anything really, and again as with the grabber, the drone can not stay steady enough to be able to properly aim at anything.

The battery life is very poor. On a full charge the drone will last about 8 minutes tops, but many times would not last longer than 5-6.

The drone could have been packed better. By the time I got the drone everything was loose and rattling around in the box. Thankfully after inspecting the drone I concluded that there was no damage, but I could have easily been not so lucky. The Mambo drone was incredibly fun and intuitive to fly and as a newcomer to the hobby I was able to pick up on the mechanics right away. My biggest issue with the Mambo would have to be the poor battery life but for the price it’s really not all that bad. Once you get attuned to them the attachments are really fun and can be used for a whole range of things. If you’re looking to pick up a Mambo Mini-Drone for yourself or someone else you’re going to be paying about $140 and it’s totally worth it. and it would make a great Christmas present. 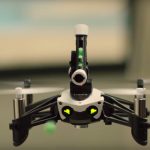