The gods are watching, a new wizard is approaching, and you’re at the centre of all of it in Olli Olli World. The long-awaited third entry into the OlliOlli series brings a wild story, totally tubular tricks, and intricate skate parks and environments to shred.

The Wizarding World of Skateboarding

The world of skateboarding needs a new look, some new blood, and a huge set of trick combos to help reach Gnarvana. Olli World carries a goofy and entertaining story that essentially sets you up to be the raddest and baddest skateboard prodigy there is. Chiffon is retiring so now is the perfect time as her best buds are along for the ride to help you become the best of the best. 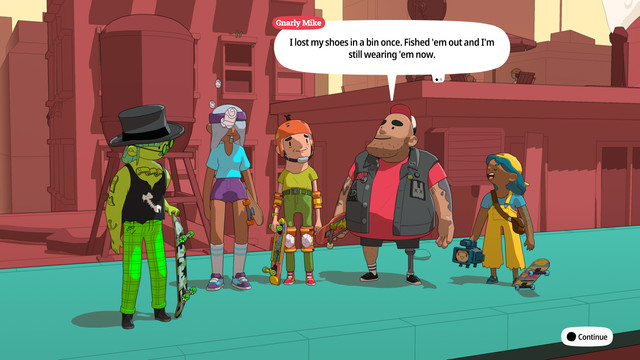 Along the way, you’ll be meeting more characters like Dad, Suze, and of course the gods that will help you raise your gnarly game to the ultimate level. Each of these personalities allows the game to take you to wild locales that never get old and keep you on your toes as you skate your way through OlliOlli World.

Olli Olli World is a fast-paced 2.5D extreme sports game with some of the most unique and eye-popping stages you’ll ever see. Skating from left to right (and sometimes right to left), you’ll traverse your way across huge gaps, half pipes, massive pipes to grind, and even billboards held up my massive bumble bees; all in order to make it to the end and survive the level.

While your main goal is to reach the finish line, there are high scores and a number of challenging tasks in each and every stage you play. Challenging is also one way to describe OlliOlli World. It’s tough, very tough. But not without easing you into it. The game does do a great job of laying the groundwork for what it will take to reach Gnarvana and become the new Skate Wizard. Along your journey, your new friends will show you how to do a flip, grab, grind, wall ride, and more. Each set of stages is in its own hub-world where you’ll be challenged with ways to incorporate these new techniques. Pulling off these moves can combos can be punishing, and sometimes frustrating, but it’s never because Roll7 and Olli Olli World are unfair, it’s because sometimes it takes a lot of practice to get it just right; just like using a real skateboard. And similar to games like Celeste, when you fail your run, you immediately go back to the start or recent checkpoint, letting you hop right back on your board without hassle. OlliOlli World looks and sounds awesome. Despite the difficulty, the game isn’t reaching for realism, giving it the opportunity to present an insanely whimsical and vibrant canvass for you to shred with your board. All of the characters have noodle-like arms and legs, with wild outfits. You can join their whacky party right off the bat, customizing everything from your board’s wheels, all your clothing, and of course your board, tracks, and wheels. Heck, if you want to you can dress up as a giant bee or alien.

Each stage is a wild, fast-paced ride that never feels stale. Combine the multiple biomes (desert, forest, etc.) with the groovy music, and you have yourself a great feeling and sounding game from start to finish. 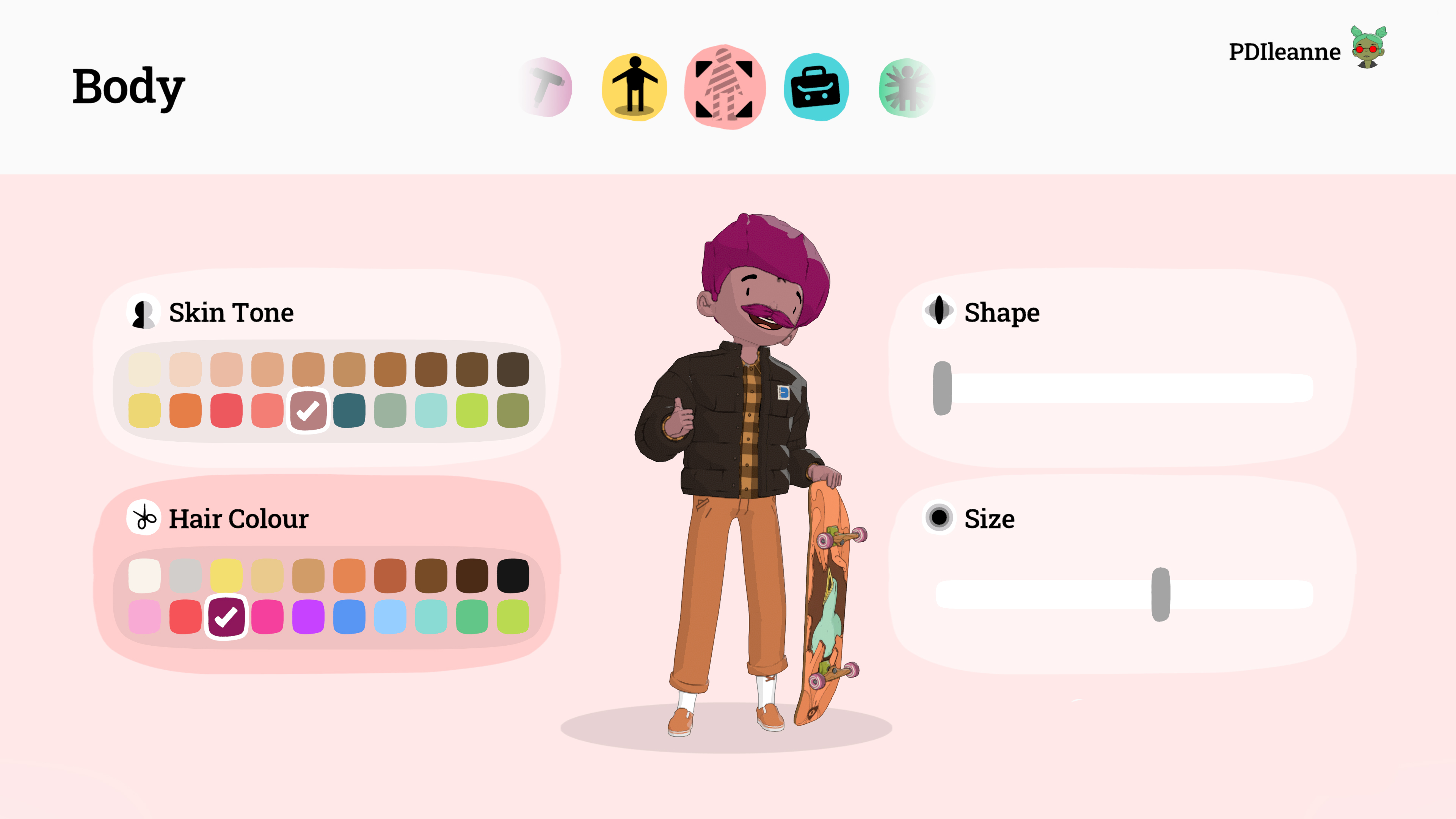 As mentioned above, Olli Olli World can sometimes be really difficult. There were times that I spent 20 minutes just getting through a third of a level; one that would take about 4 minutes if I didn’t fall or smash as the game calls it. I never felt disheartened enough to give up and part of that reason is the wide variety of tricks you have at your disposal with the joysticks and a couple of buttons.

Momentum is king in completing many levels, but a quick flick of the left joystick, a nicely timed ‘A’ button press, and you’re skater is up and running on the next set of fantastical environments. 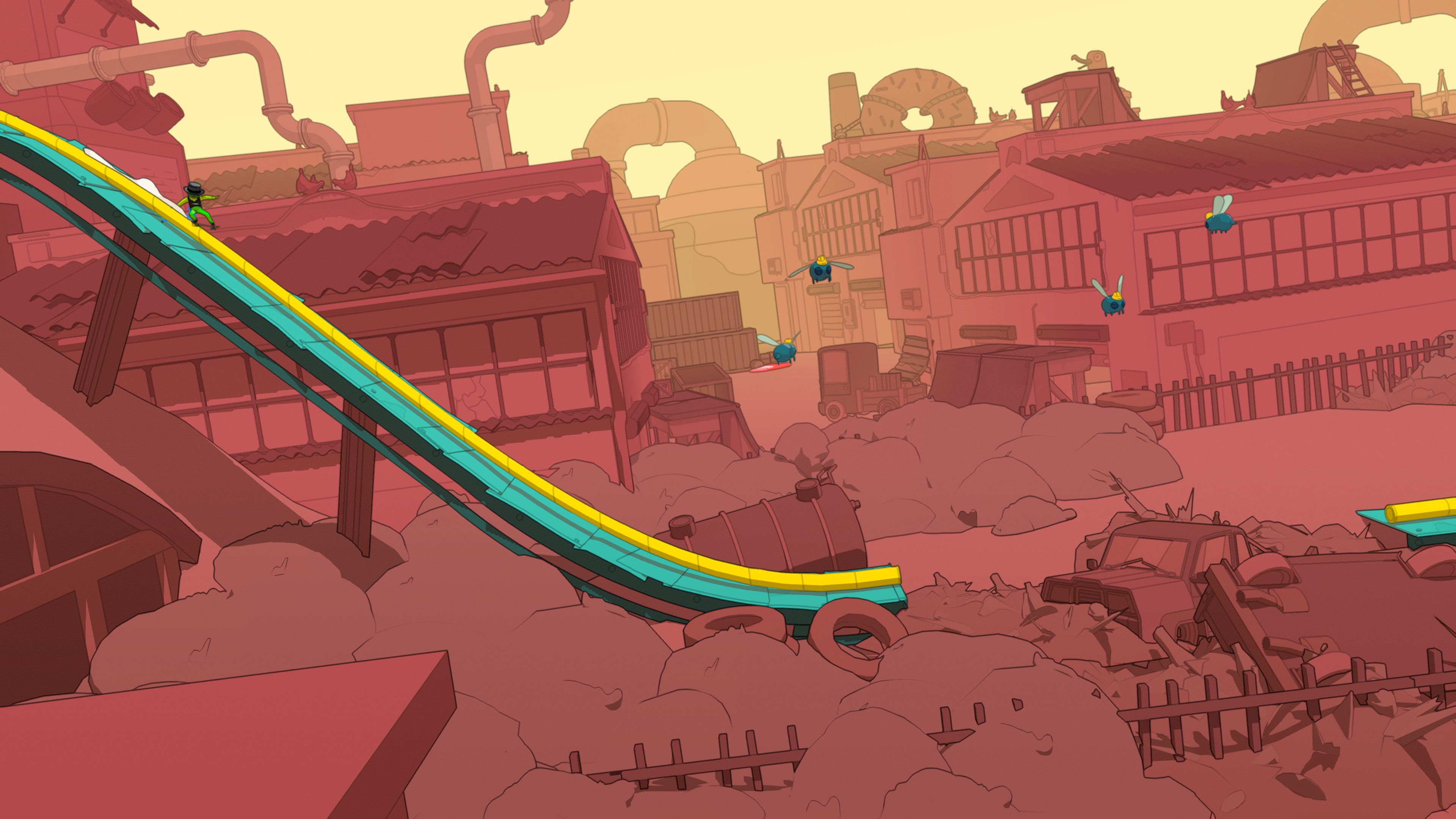 All of this is not only achieved in the single-player experience, but you can reach Ganrvana and take your mad skillz online. I dabbled very briefly in this part of the game but I think it’s fair to say my abilities aren’t as “rad” as I thought they were.

If you’re up for a challenge, Olli Olli World will definitely provide that. Thankfully the difficulty seems fair and the world that Roll7 has built is so much fun that you can’t help but smile each time you encounter a new character or say “wow” when you see what the next stage has in store for you.

Even though I found myself crashing and burning multiple times (and I mean MULTIPLE times), it never felt like I was being cheated or that I couldn’t accomplish what I needed to in order to progress. The settings and feel of the game had me coming back for more despite the scrapes and bruises accumulated along the way.