From the moment I received an email about Olija, the newest game from Skeleton Crew Games, out of Kyoto, Japan, I knew it was something I wanted to play. Partly because it reminds me of Another World, a game that stood out to me as a child, and also because I needed my palette cleansed after spending over 150 hours lost in Assassin’s Creed Valhalla. During Devolver Digital’s Devolver Direct stream this past July, Olija was part of the show and it was something I had completely forgotten about until just last week. So how does it fare, what’s it about, and is it worth your time?

Playing as Faraday, a man shipwrecked and trapped in the mysterious country of Terraphage, you’re armed with a magical and legendary harpoon. Your crew is missing, you’re alone in unknown territory and it’s pretty obvious you don’t belong there. Terraphage feels large oppressive and that feeling of unwantedness sticks with you the entirety of the game. It’s a testament to the excellent world-building developer Thomas Olsson incorporates here and it’s as much a character as Faraday.

Faraday isn’t a legendary hero when you begin and that’s what I like about him. He starts off weak and can only use his fists before unlocking more ways to defend himself against the inhabitants of Terraphage. Not long into the Olija and you’ll find a sword that is a better weapon than your fists, and it can help with obstacles in your way, but later you unlock the Harpoon, and suddenly you feel that much more powerful. Being a mystical weapon, the Harpoon serves a much higher purpose than a simple sword. You can throw it at enemies, recall it on a whim even. You can use it for melee combat and spear enemies or use it for ranged attacks. And this is before I mention acquiring a crossbow that’s exemplary at accessing places normally out of reach.

And while the gameplay is a blast, the one thing that I found to be troublesome is how enemies react to Faraday. In most cases, I was able to annihilate any enemy before they even knew what happened. That isn’t to say the combat is mindless, it just isn’t as challenging as I’d hoped. I’ll chalk it up to the harpoon being magical but in reality, there’s dissension when it comes to the AI in Olija. That said, it is immensely satisfying to skewer anything that gets in your way.

My Harpoon is too big

Boss battles offer some clever encounters that use combine using your weapons with problem-solving to complete them. In some instances, when dealing with bosses you’ll have to hit flashing weak points while dodging attacks. You’ll come across Oaktide, the hub area within Olija and here you can slowly rebuild the broken-down port’s buildings. Faraday can also purchase various hats that are used to alter how combat works. Some might him faster in battle and another makes him more powerful. Throughout Terraphage you’ll gather the necessary materials you create various hats and each one does feel like it makes a difference. I enjoyed trying to balance being stylish and finding the perfect perk. 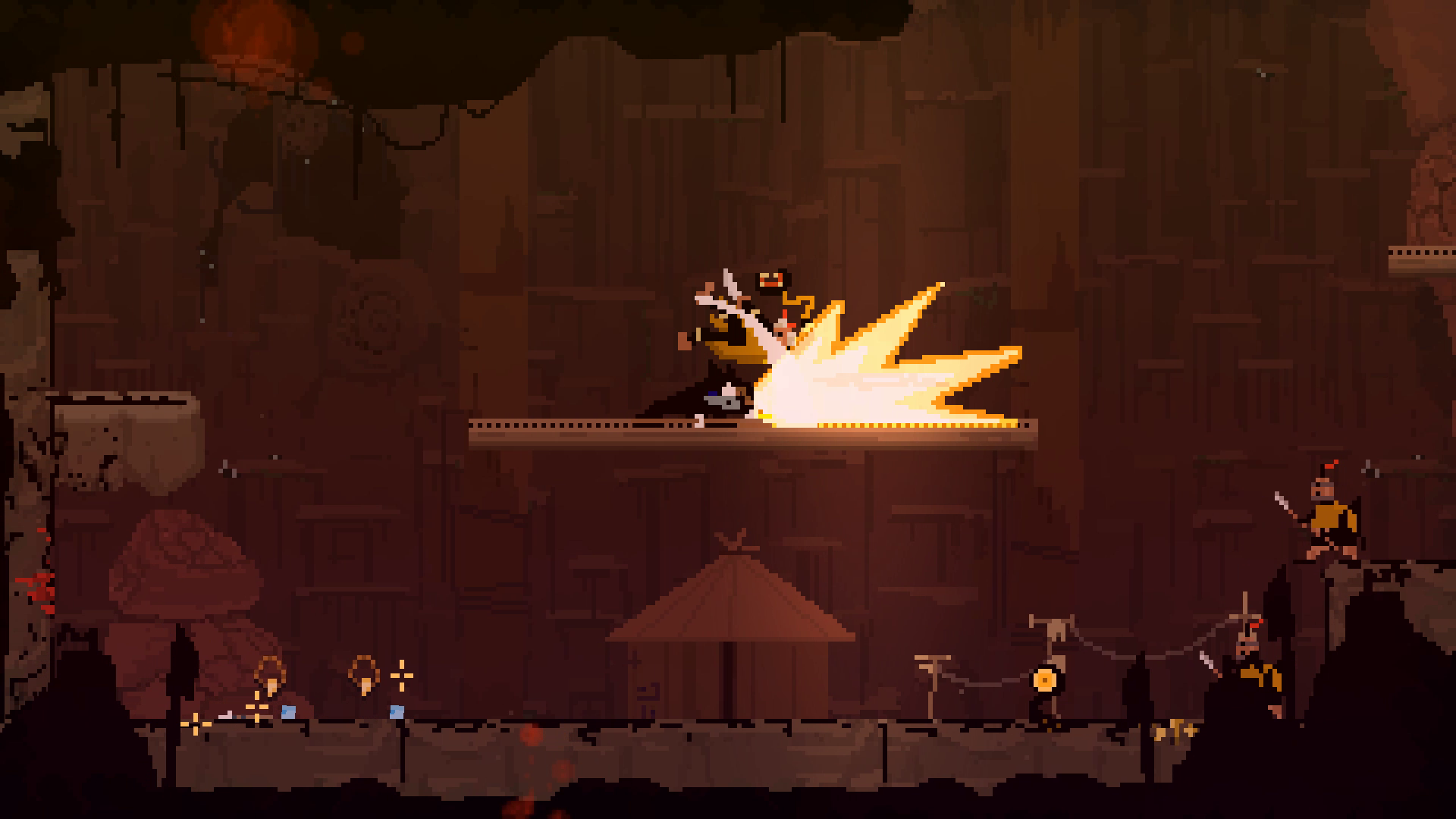 Olija is short but it is an impactful game. It’s got some minor technical issues but the gameplay is intense, the story is impeccable and the puzzles are challenging. The atmosphere of Terraphage is as important to the game as Faraday himself and it’s thanks to the magical harpoon that Faraday wields that the gameplay is so much fun. I’d love to revisit this game but it is so short and lacking in replayability – the upside is that the time you spend with Olija won’t soon be forgotten.