In my daily life, a lot of things come to mind when I see the word, ‘NUTS‘. The first thing that reminds me has to be the famous Nuts scene from the season 1 finale of 2006’s Jericho.

That’s the past though, the nutty 2021 addition to those many reminders has to be the recently released NUTS. The game was developed together by Joon Van Hove (Design & Development), Pol Clarissou (Art), Almut Schwacke (Sound), Charlene Putney (Writing) & Torfi Ásgeirsson (Level Design).

NUTS is a first-person surveillance mystery game that puts you into the shoes of the game’s unnamed silent protagonist – who I fondly call Plays with Squirrels – who is a researcher hired by Viago University. Your first job is to research the habitat of squirrels of Melmoth Forest.

When the game drops you into the forest it introduces you to the game’s caravan, a living space that the player will spend a lot of time in. It features a retro editing station that can play, pause and fast forward, through footage on some thick CRT TVs. 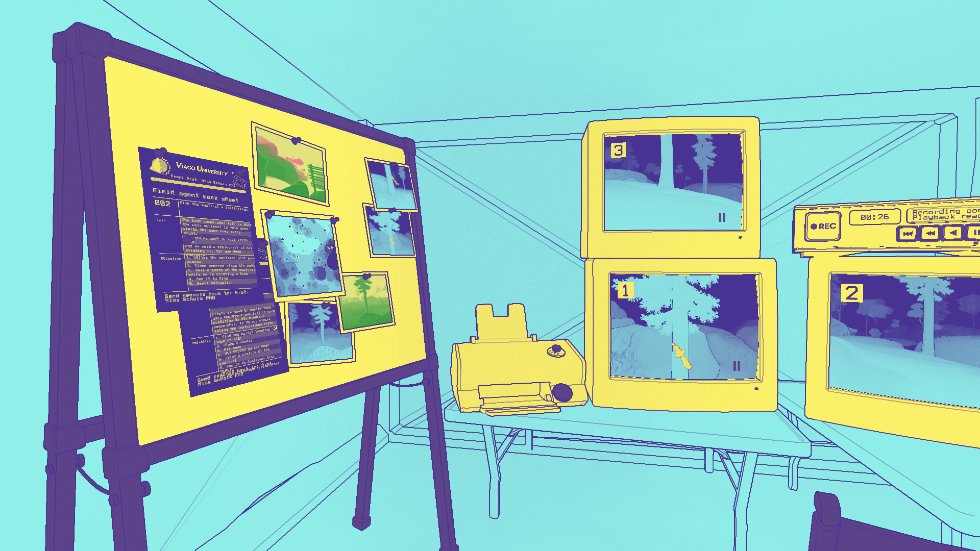 You’re also introduced to the game’s two supporting characters, first is Simon who you only interact with through notes he leaves for you, his job is to drive you from location to location in the game’s six chapters with his handy ATV.

When the caravan is set up and the generator is all gassed up, you can contact your supervisor at the university’s research institute, Dr. Nina Scholz. By sending a fax to her, she quickly calls you through the caravan’s phone to formally introduce herself to the player and detail exactly what you’re doing.

Nina is the anchor of NUTS‘ narrative and drives the story forward through her commentary. She reveals that the squirrels you are researching are an endangered species of squirrels and Melmoth Forest, its habitat, is protected. A corrupt corporation doesn’t like that and wants to tear it down and make something for its benefit. I honestly did not expect there to be a whole background narrative happening like that. I thought I was expecting a fun-loving squirrel game but things got nutty the farther I played. Back to Nina, she details your job which is to set up a tripod camera – provided by Simon – to record the adorable squirrels. The camera feed goes directly to the CRT TV in the caravan, the more you go through the game the more additional equipment you’ll get; the max is three cameras and CR TVs by the end of the game.

At the start of each chapter, Nina goes over your squirrel recording task for the next little while and sends the GPS location of your mission starting point.

NUTS‘ gameplay loop is setting up the camera from the starting point in the daytime and analyzing the footage back in your caravan at night; which is when the squirrel comes out. After you get a better idea of the squirrel’s never-changing path, you go to bed and rearrange the camera for the next day. 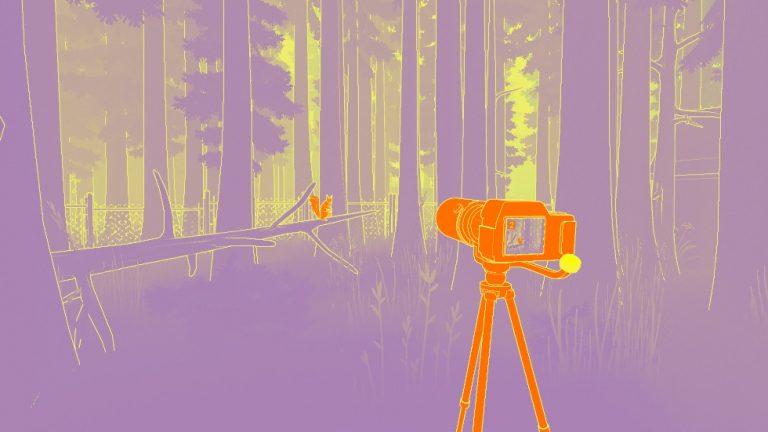 Depending on how long the squirrel’s path is, it usually takes a couple of weeks to get to the end of the clip, which is usually its nuts stash. Each day you get maybe one to five seconds of footage to analyze and from there, you plan for the next day. When you have more cameras in later chapters it becomes easier to figure out the squirrel’s path with the multiple angles you’re analyzing.

If I have a critique of NUTS, to be honest, it feels less like a game and more like a job with not a lot of stress to it. That being said I got some enjoyment out of it and here’s why. I took a lot of photography and videography classes so I got a bit of satisfaction out of getting the perfect shots in this almost videographer simulator. There were times when I got an idea of where the squirrel was heading that I tried to predict its direction; I ended up being wrong and wasted a day sadly.

While I like the gameplay loop, I can see how it would be boring to others but I think NUTS‘ intriguing story and Nina’s characterization through the voice actor’s stellar performance are enough to look past that. On the plus side, it’s not that long of a game, if someone was committed to playing NUT, they could beat it in about 4 hours; it’s not that long of a game.

Visually the game looks unique with its three colour approach to the game’s environment. Each chapter always switches up the colours, so every chapter is never the same. I appreciate that approach because the game gives off an aesthetically pleasing look to it that I’m always impressed by whenever I’m walking through the forest.

On the technical side, NUTS could have been implemented much better. I’m strictly talking about the Switch port here, but I had some issues with the game like slightly freezing for a couple of seconds in later chapters. It wasn’t in my face about it but I took notice of the game’s record scratching like sounds that led to the game freezing. Also, NUTS has slight frame rate issues, it feels like a much slower game when compared to its PC release.

Overall, NUTS is a good first-person narrative-driven game with a story that has intriguing elements to it. On the basic level, there is no way to get around it but it’s a game about squirrels, on a deeper level it has so much more going on. Melmoth Forest has a bigger mystery going on the inside and in the background that I believe is worth diving it.

Its unique visuals and story will hook you, but if you’re not into the videographer gameplay then it might push you away. If it doesn’t then you’ll get a lot of enjoyment out of Nina’s character depth and development through the game. If you’re worried about time commitment then no worries, if you commit to the game you can beat it in an afternoon, which is a plus in my book. I think NUTS is worth your time.

NUTS is currently available on PC and Switch.