The Nintendo Switch OLED model is readying to launch this week and while the refresh is nice given it has a new screen, new colour, and assorted bells and whistles; this upgrade isn’t for everyone in the market. As far back as I can remember, Nintendo’s always invigorated their consoles with a mid-life upgrade and while it isn’t always exactly what the consumer is asking for, it’s usually enough for pre-orders to immediately sell out.

It comes as no surprise either, given the Switch has hit a whopping 89 million lifetime sales as of March 2021, bringing it close to the Wii’s 101 million units sold, and the DS’s 154 million unis, Nintendo’s second and first best-selling consoles of all time. Nintendo’s quality is hard to match and the sales prove that many of the first-party titles are console sellers, this year’s model is a perfect showcase for Metroid Dread.

The Nintendo Switch OLED model’s screen is the star

Take for example this latest iteration of the Nintendo Switch, I own both the OG model and the Switch Lite model. I use them frequently and aside from normal wear and tear, I take care of them. I could use these for another five years if I wanted to. However, as soon as Nintendo announced the OLED model, I went and pre-ordered it, not even second-guessing whether or not it. Even if the upgrade costs me an additional $50 over the standard model, I had to have it. I’ve done this every generation with Nintendo from the Game Boy to the 3DS, double, even sometimes triple dipping. I hit pre-order minutes after the announcement aired, knowing the OLED model is a marginal update.

When compared to my launch model that’s seen half the world, delivered thousands of hours of gaming, and still holds up well is remarkable but putting it next to the newest model gives me all the confirmation I need to upgrade. It sure makes spending $449 a bit easier in my head but I can say that this isn’t the upgrade some of you are looking for and for those who are on the fence, the OLED model would be the time to switch it up. 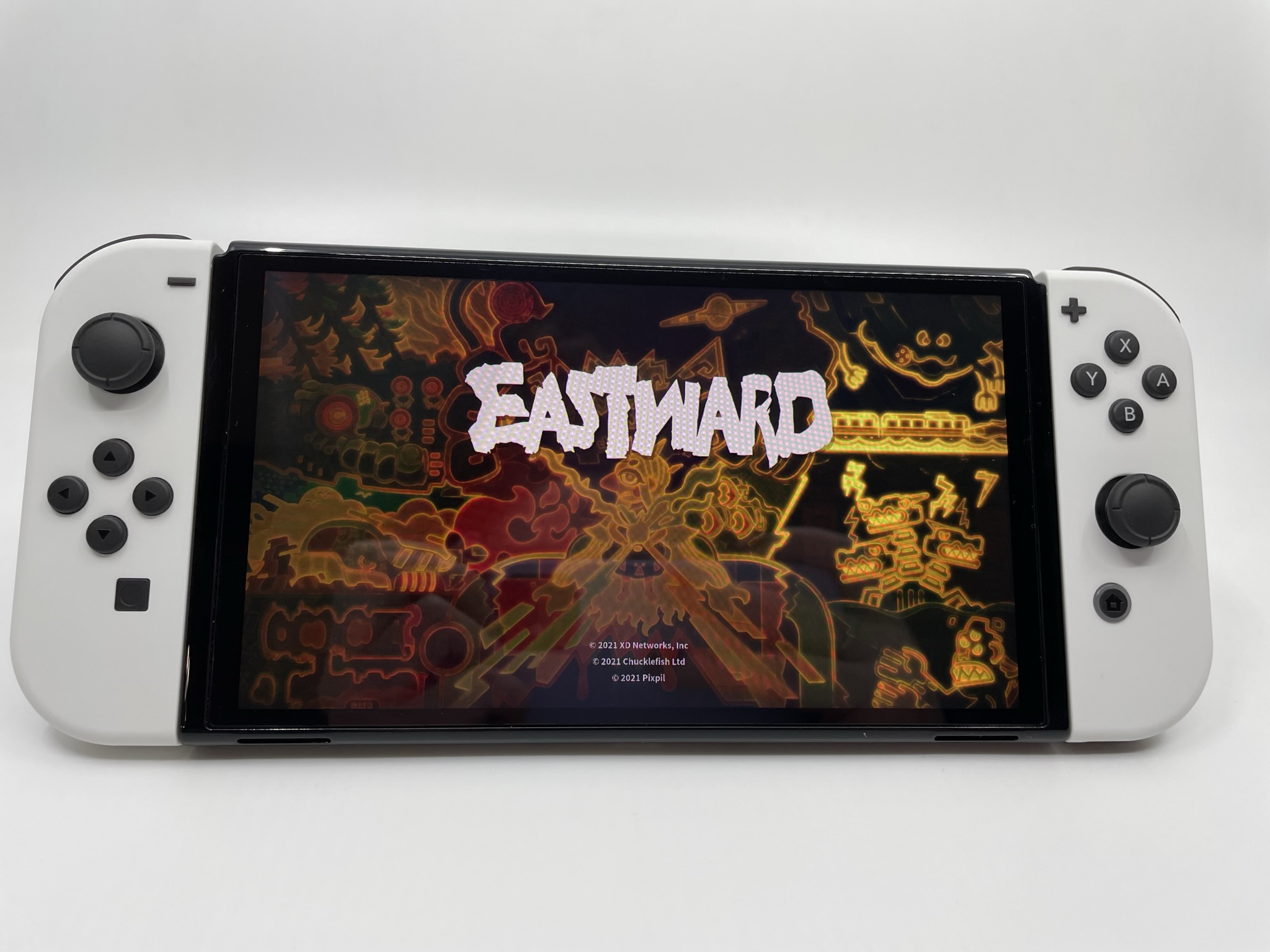 Undoubtedly, the biggest change is the new 7-inch OLED screen up from the previous 6.2-inch LCD found on the original console. Spending a week with the latest model makes it hard to go back to an LCD screen. Swapping back and forth between each model and tinkering with the settings on the original Switch improves things but then you turn the OLED model on and it’s a clear and cut improvement. Even at the brightest setting on the LCD compared to the crisp, beautiful OLED, my launch model stands no chance. 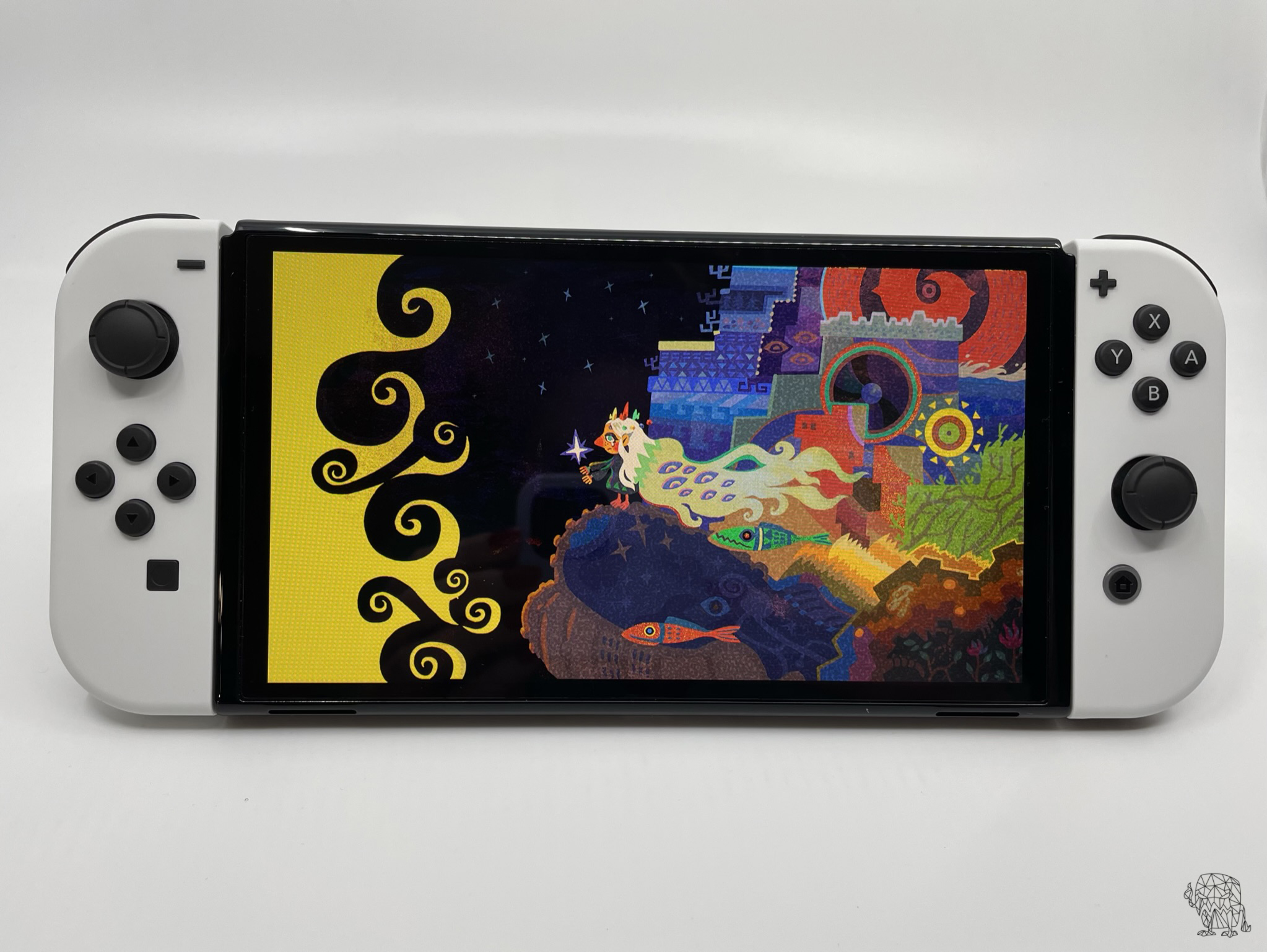 One thing OLEDs do better blacks look deeper, whites brighter, and colours more vibrant and the dozen or so games I’ve tested look infinitely better. Any video that shows both models next to each other does the screen no justice and it is one of those things you need to see in person to appreciate the change. OLED displays make each pixel its backlight by passing electricity through it. Whereas an LCD screen needs an external power supply to brighten the screen. However, while the screen is a big improvement, the Nintendo Switch OLED model still renders at 720p and 1080p when docked.

However, playing handheld reinvigorates the Switch. It wasn’t until I had Metroid Dread downloaded onto my Switch OLED that I came to appreciate the updated screen. The trimmed bezels make a huge difference in real estate, giving you more of a screen with a vibrant, stunning picture. Everything in Dread pops, the menus and maps are wonderfully implemented, each pathway and secret is enhanced by the screen. Launch title The Legend of Zelda: Breath of the Wild is another showcase of how impressive the OLED screen is, seeing the opening hour being brought to life by the OLED screen and the LCD screen isn’t as able to convey the sense of wonder a colourful, brightly lit screen does.

The Joy-Cons are nothing new, you’ve used these for almost five years now. I wish Nintendo iterated a bit more here and it’s a shame the company didn’t’. Instead, you get the backwards compatibility to link your favourite pair of controllers to the shiny new OLED model. With the shift to OLED, the Switch is a bit heavier weighing 420g with Joy-Cons attached. I’ve never had any issues with how the console felt in my hands and this is a non-issue here, too. 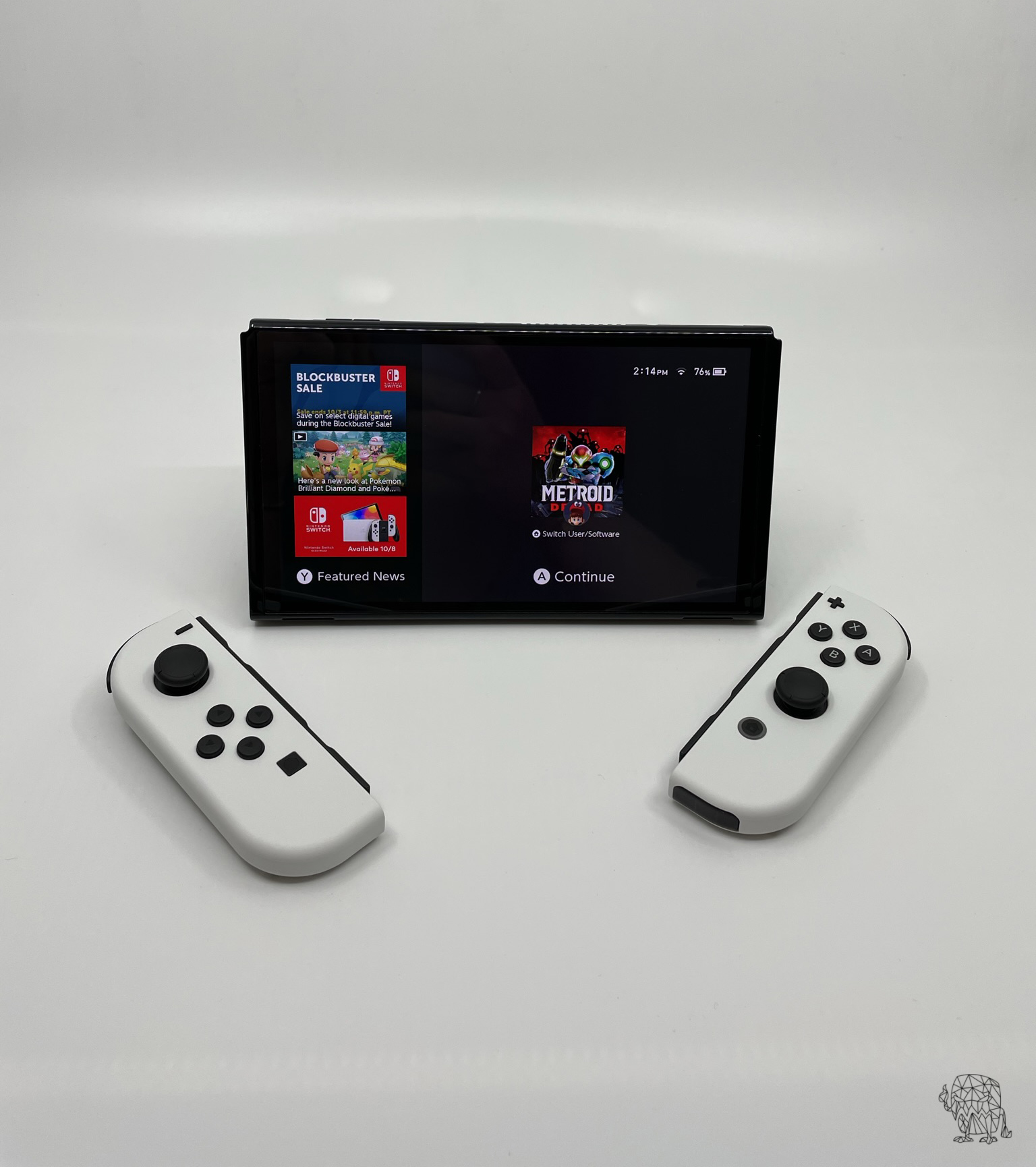 Another key improvement over both previous models of the Switch is the new kickstand. Instead of the flimsy, plastic kickstand, the original Switch includes, the new kickstand takes inspiration from tablet covers by running the entire width of the back, with the option to adjust it to a varying degree of angles. Playing on a tabletop I’m no longer worried about seeing my device tumble to the floor. Instead, the sturdiness of the new kickstand ensures I no longer need to use my tablet stand with my Switch. Nintendo’s also improved the venting by swapping out the plastic for what I can assume to be some type of metal. The MicroSD slot is now on the back of the Switch, covered by the kickstand like before but it feels a bit more open to exposure. 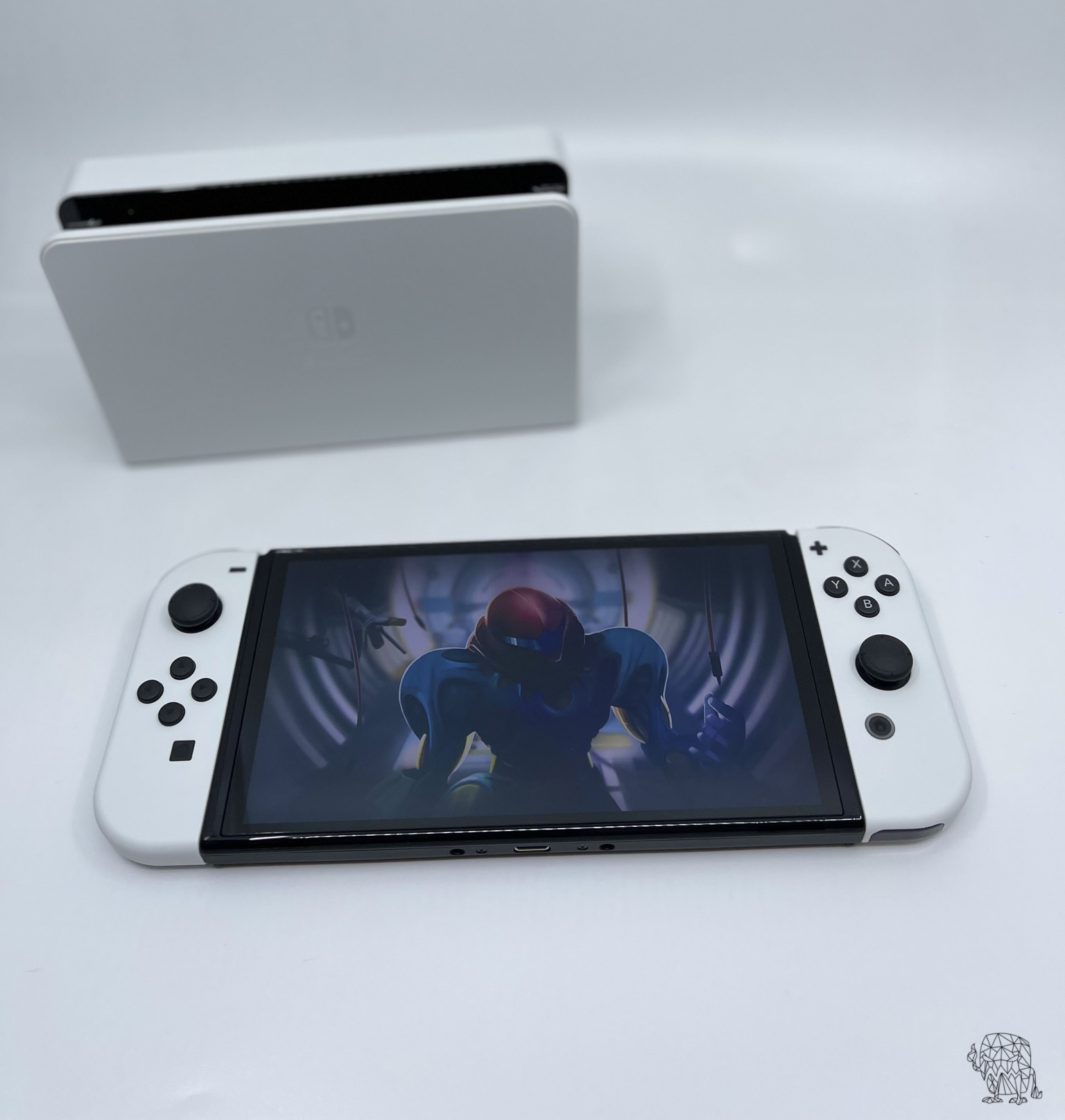 If you were hoping for a bigger battery, I have some bad news for you — Nintendo has included a 4310mAh internal battery, the same found in Switch refresh from 2019. There’s also no change to the left D-Pad, which is something I’ve been vying for from day one. I’ve been using my Switch Lite and Nintendo’s decision to stick to a traditional D-Pad was the right choice. It feels like an oversight and sure, I could use the Pro Controller but it’s hard to go back to the D-Pad on the regular Switch after using the Switch Lite for so long and for so often.

Nintendo also doubled the internal storage of the Switch OLED over the standard Switch, launching with 64GB of storage. The dock’s changed too, getting a redesign that comes with a built-in LAN port that looks to minimize lag over Wi-Fi. Nintendo’s also improved the speakers on the OLED and for it to fully appreciate it, you need to play at nearly full volume. It is noticeable but in a noisy room, I’m not sure I could tell the difference. I appreciate the refinement of the audio at this point in the console’s lifespan. I prefer using headphones so the recent firmware update adding support for Bluetooth headphones is more than enough and I’ve exclusively moved to use my AirPod Pros whenever I’m playing in handheld mode.

And speaking of the LAN port, multiplayer games on the Switch should be a bit better. If you’re plagued with Wi-Fi issues where spotty connections are consistent, the direct link to a router should alleviate concerns about online play. I’ve connected the Switch dock to my router to re-download my library but it’s hard to tell exactly how fast things are downloading on the console. I left the console to download my library overnight and was about 70 percent complete by noon the next day. It is clear multiplayer was the focus of including a LAN port. 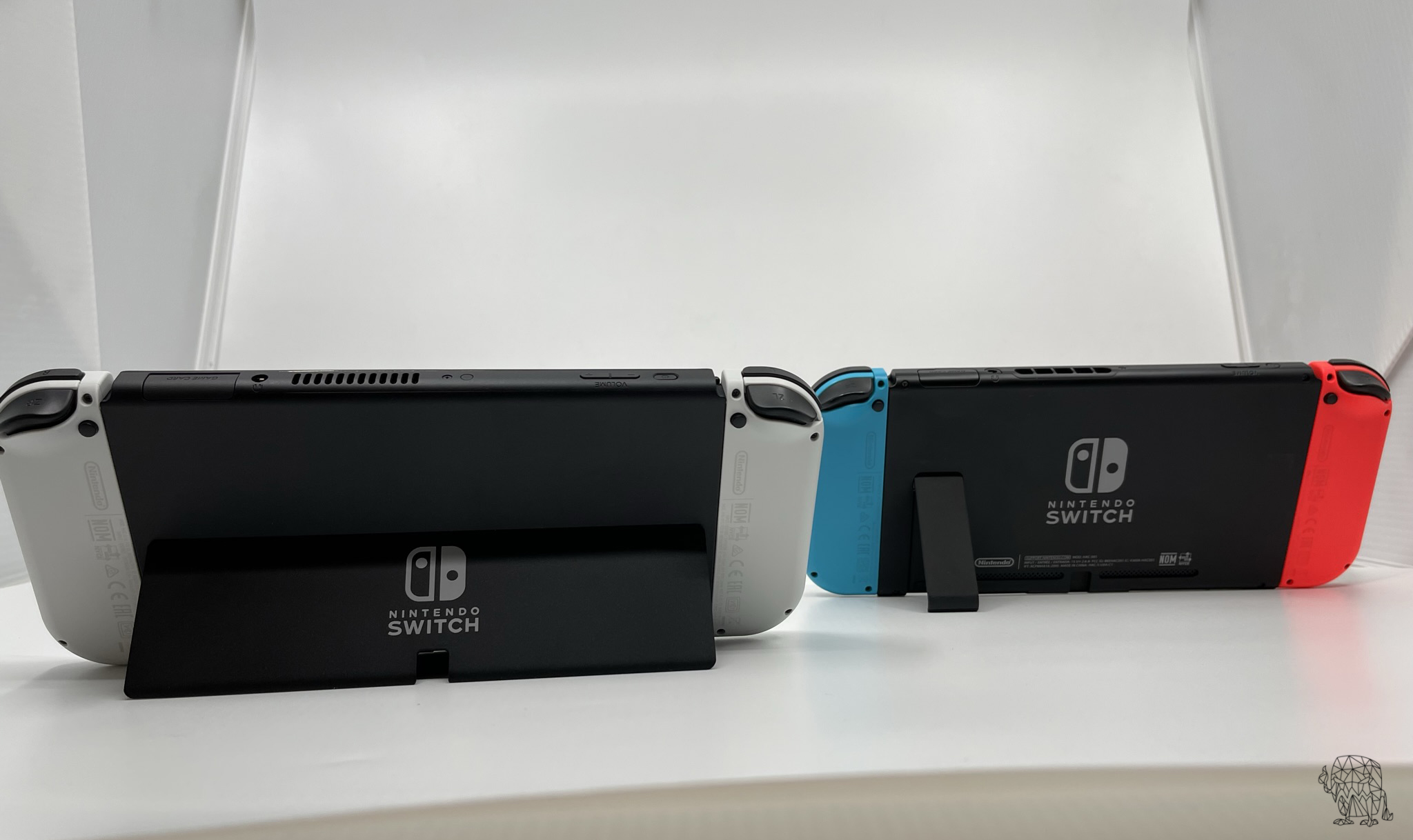 Are the improvements enough to drop $450 on a new console? If you’re an everyday Switch user and play in tabletop mode frequently then yes, I think it’s a good update to the Switch but not exactly the one everyone wants. For anyone on the fence about upgrading their Switch to the OLED Model, you might find yourself playing out of docked mode more than usual but I wouldn’t suggest spending the money and trading in your existing hardware for some of these improvements. I do think the new dock is worth checking out though as it has a LAN port that’ll make playing games online better, especially now that Super Smash Bros. Ultimate has concluded development.

On the topic of whether the upgrade to an OLED screen justifies the price tag, it comes down to what you’re looking to do with the Switch. If you plan on keeping the hybrid console docked, then the standard console is more than enough. If you plan to play the majority on the go as a handheld device, then yes, I recommend the OLED model. Whatever you decide though, the Switch is a must-own thanks to its first-party titles alone, but third-party support has been impressive from day one.

[A pre-launch final retail unit was provided by Nintendo for this review].