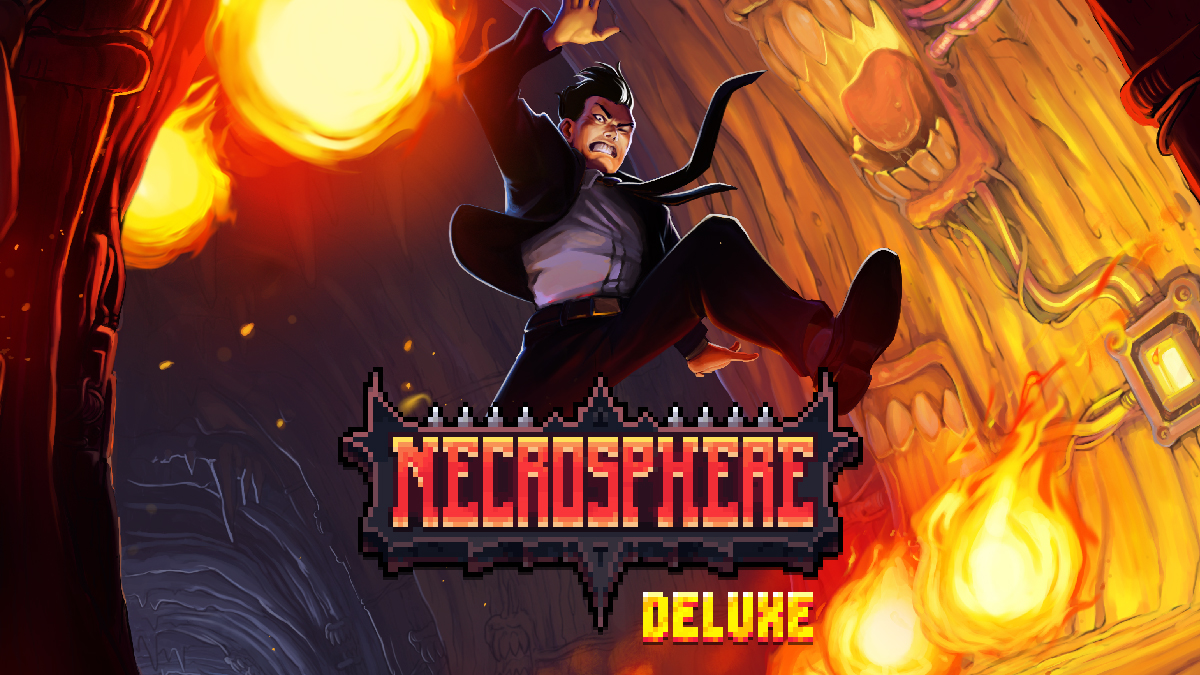 You play as Terry Cooper, an agent who gets killed during a shoot out and is then sent to the Necrosphere, the land after death. The search then begins for a portal that can return the dead to the realm of the living, but it is said that it can take an eternity to uncover the exit as the area is filled with decoy portals that will transport you back to the beginning. It is because of this that your two agent associates leave information scattered throughout the world on how to overcome the many perilous experiences before achieving a successful return.

It will be made apparent early on that Necrosphere is not for everyone. The difficulty spikes and frustration that areas will cause may lead to the enjoyment factor being removed completely for certain players. There is no tutorial to start off the adventure, but you will quickly uncover that movement occurs with a two-button system where you are able to move either left, or right. As time progresses you will uncover new skills that will also add deeper gameplay elements while continuing to rely on the two-button system. Players will encounter various environments that offer up their own challenges and obstacles to traverse in order to continue the journey. This adventure requires a lot of patience and impeccable timing to navigate through certain puzzles as many miss-steps will lead to instant death. My death count most likely was in the hundreds as certain areas are beyond frustrating. However, that is part of the experience and fun. It is also easy to get lost as you explore areas looking for alternative routes, which may cause you to make a wrong turn and then have to repeat an area that you just spent several minutes stressing over.

The skills that you will acquire are a dash that will propel you forward, granting the ability to overcome short gaps, gauntlets that give you the strength to break through boulders with your dash, and a jetpack that will aid in exploring elevated environments. Each area offers up a unique colour palette and musical score that will surely impress. I would temporarily pause my exploration from time to time to enjoy the varied soundtrack that each environment presented before becoming a victim of spikes, fires, and even evil agents that would follow your every move. Thankfully, checkpoints are positioned throughout to help minimize the need to replay entire areas. Exploration within Necrosphere offers a chaotic, rewarding, and fast-paced platforming experience, giving you minimal time to react within certain puzzles. You will need to utilize all skills at your disposal to uncover the sequence on how to overcome each individual puzzle. Slow progression through each puzzle will occur as you gain more information during each trial with the hope of eventual completion. The two-button system creates an overly-difficult experience, but that is what the developer’s intention was from the very beginning. Moments will also occur where you did not think puzzles could become more difficult, but then fireballs will be attracted to your movement and follow you until completing certain areas.

You will uncover several portals that, once entered, will return you to the very beginning of the Necrosphere, forcing you to explore and uncover new routes with newly acquired skills at your disposal. You will traverse the same environment several times before reaching the correct portal that returns you to the land of the living. Once mastered, you will be able to start the experience over and enter the challenge of speedrunning through Necropshere, or seeing whether you can complete the challenge of not dying a single time. Good luck. Necrosphere is a game that I struggled to decide on whether or not I love it, or hate it. Developer Cat Nigiri created a platforming experience that is defined through a two-button movement system that elevates the difficulty level, which also enhances the overall reward and satisfaction upon completion. Necrosphere comes recommended as it will get you sharing your experience with friends, for better or worse, but casual gamers may want to look elsewhere for an easier and less stressful platforming experience.