Moonscars combines both Metroidvania and Soulslike concepts and whether you like it or not, we’ll likely be seeing these ideas well into the future. In the case of Moonscars, it’s a bleak, sometimes frustrating, and often challenging title developed by Black Mermaid and published by Humble Games.

In the debut title from Black Mermaid, Moonscars follows the story of Grey Irma, a knight who battles through clay monsters, unstable versions of human life, in search of the Sculptor, the creator God. The Sculptor is the leader of Irma’s army and, alas, he also happens to be the source of the clay abominations you’ll hunt. The whole thing is admittedly a bit confusing, and vague, but the premise is compelling enough to hold your interest.

Moonscars pits you against the Sculptor

Moonscars won’t leave you long to understand its intensity as within seconds of taking control of Grey Irma, you’ll be thrown into a very intense and bloody battle. The first opponents are some kind of wobbly soldiers who have only one thing in mind: to eliminate you. Thanks to Irma’s limited health, almost every enemy in the game can be deadly. To top it all off, it’s not just the enemies that will be dangerous, but your surroundings as well. You could fall into spikes and be impaled outright but, fortunately, you may also be able to push an attacker to impale themselves as well, killing them instantly. Fortunately, Irma has her own set of tools and abilities, all regenerated by her Ichor gauge which can also be used to cast spells or even heal herself. You’ll even be able to juggle between different types of weapons, each with special techniques in combat. 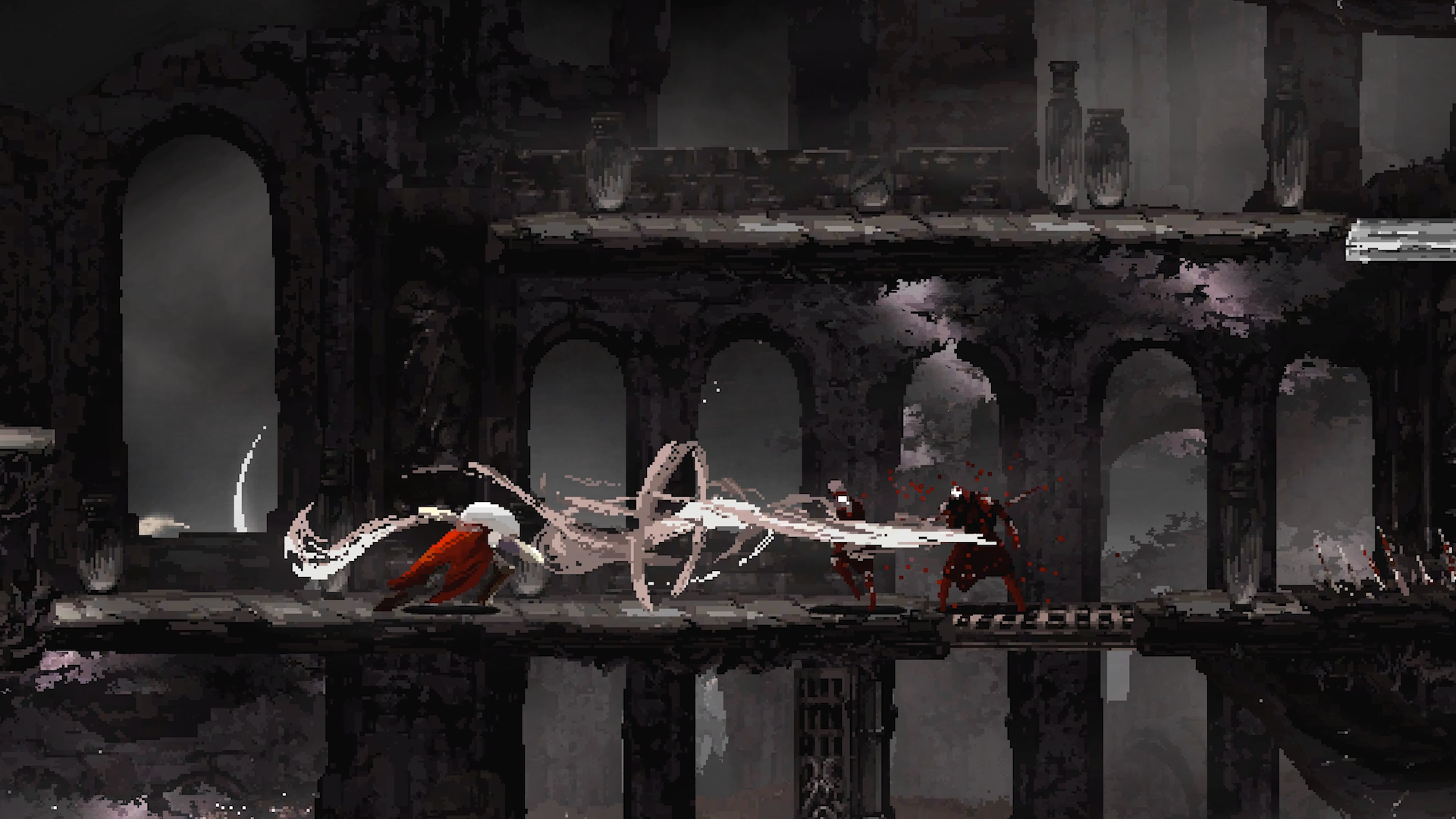 Although Moonscars‘ combat is brutal, you’ll approach each fight in a relatively well-balanced manner. Each enemy is scripted enough that you’ll be able to learn patterns with each attack presided by a glow that will allow you to block or dodge if you are very careful and synchronized. They can charge at you like bulls or even jump at you, the coloured glow will indicate whether you can counter or dodge them. This feeds into a fantastic parry system reminiscent of Dark Souls, which clearly indicates a red glow when an enemy is preparing an incoming strike.

However, even though Moonscars clearly indicates when to parry, you have no room for error. Be too fast or too slow and you will eat up damage. A successful parry can trigger a powerful counterattack and vice versa. All of the game’s combat mechanics add fluid and intense feel to each encounter, no matter how often you use them, a last-second dodge, a bloody evisceration, a bold riposte or even a throw into the traps never ceases to keep you on your toes. 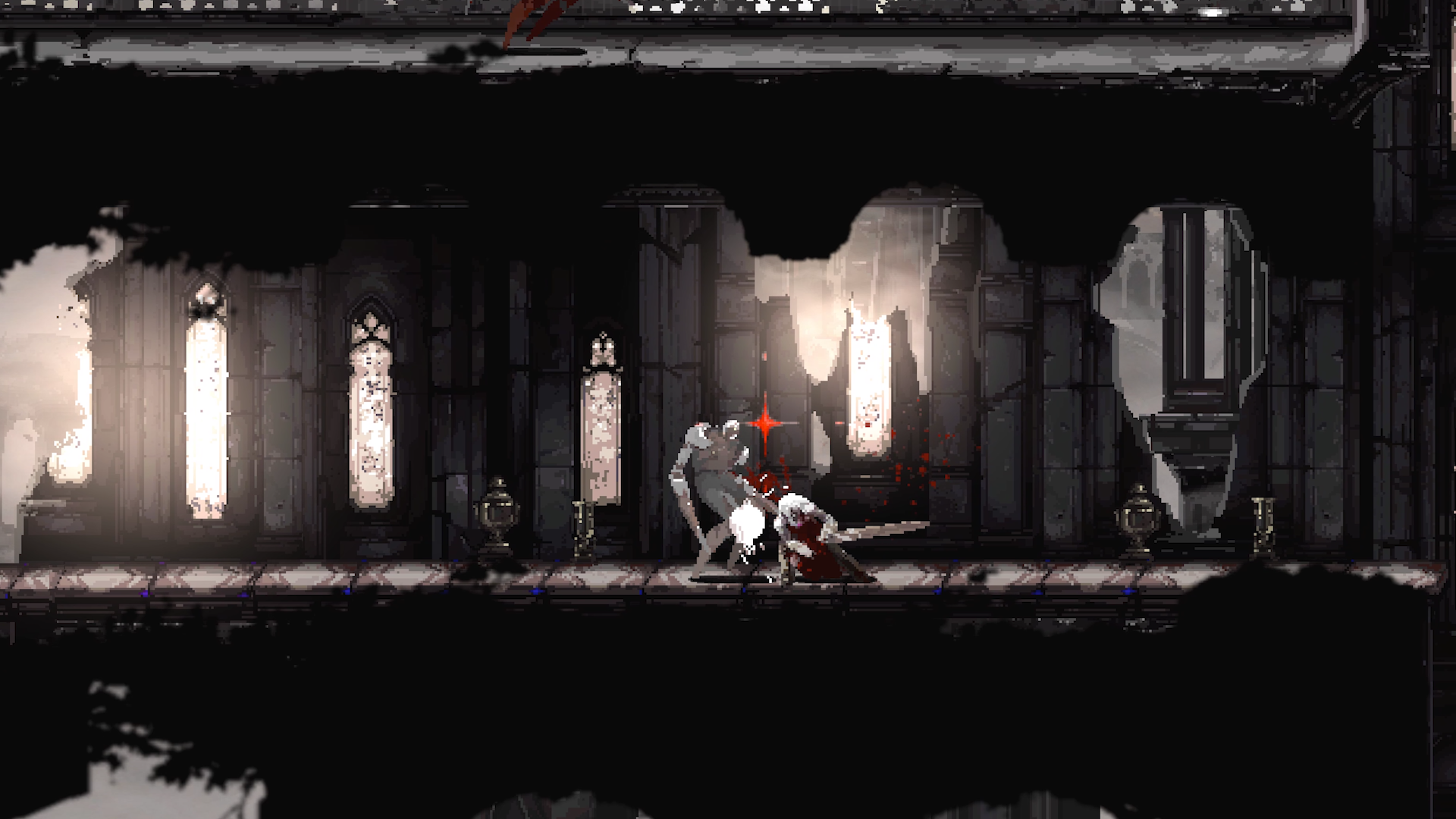 Like most Soulslike titles, death means returning to your last save point and losing your currency, the Bone Powder. The only way to get it all back is to return to your death point and collect the loot before you die a second time. Moonscars takes it a step further and is one of the few games to wonder if previous Souls games could have been more difficult. The reason for this is that you have mirrors that you can activate to save your progress, buy items with your Bone Powder, and unlock upgrades. This is all well and good, but it means that the moment you leave the mirror, you will be forced to fight a soulless copy of yourself, dying, and with everything you had when you entered the mirror – your weapon, spells and learned techniques. I think we all agree that once you’ve made it through an intense zone, you don’t necessarily want to have to fight yourself to survive. 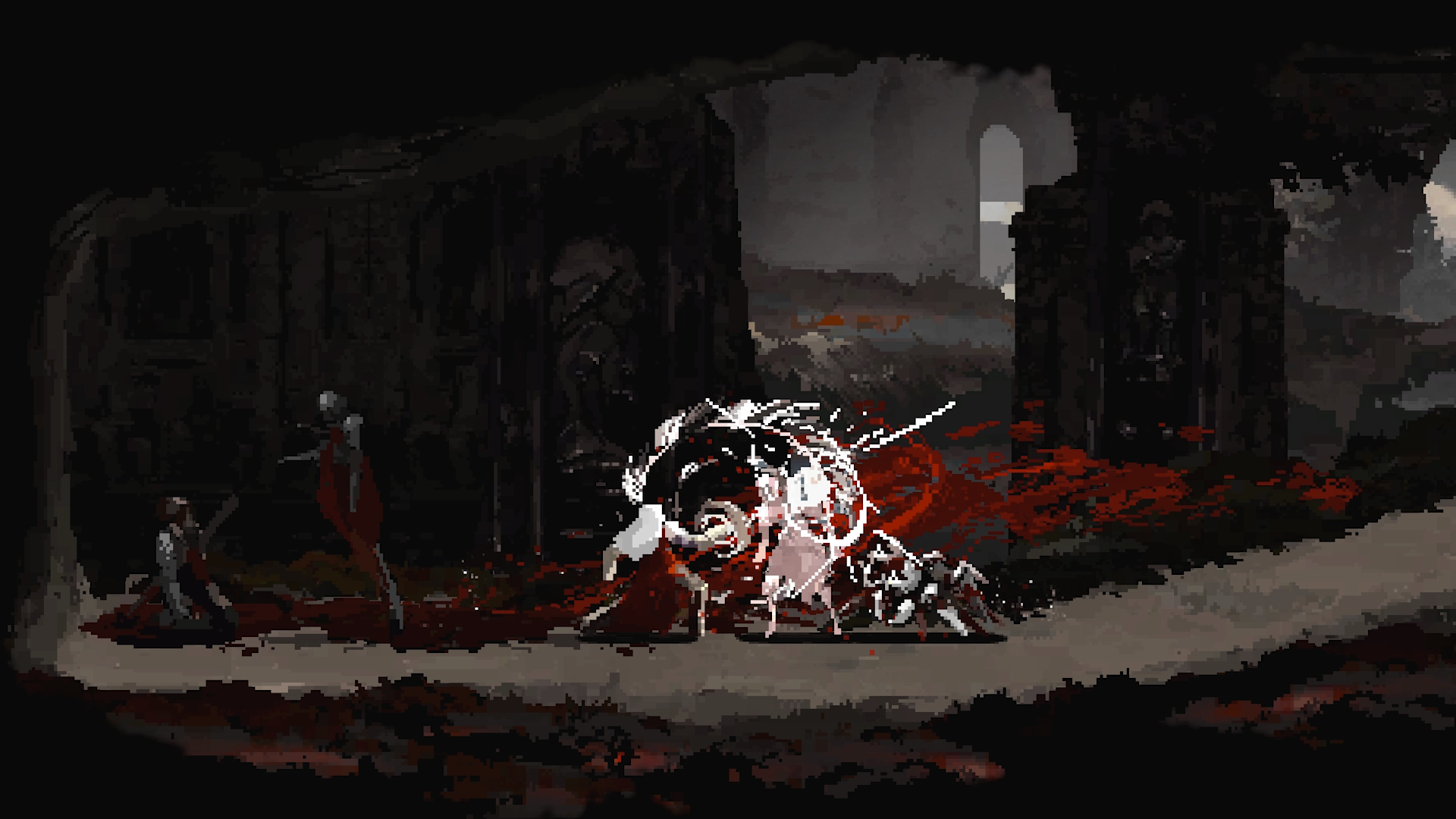 Furthermore, if you die too often you’ll be afflicted with the Moonhunger, which will make the game’s enemies more difficult. To counteract this malus, you will have to make an offering to the Moon Goddess. At least, during this segment, you will get more Bone Powder from your enemies! 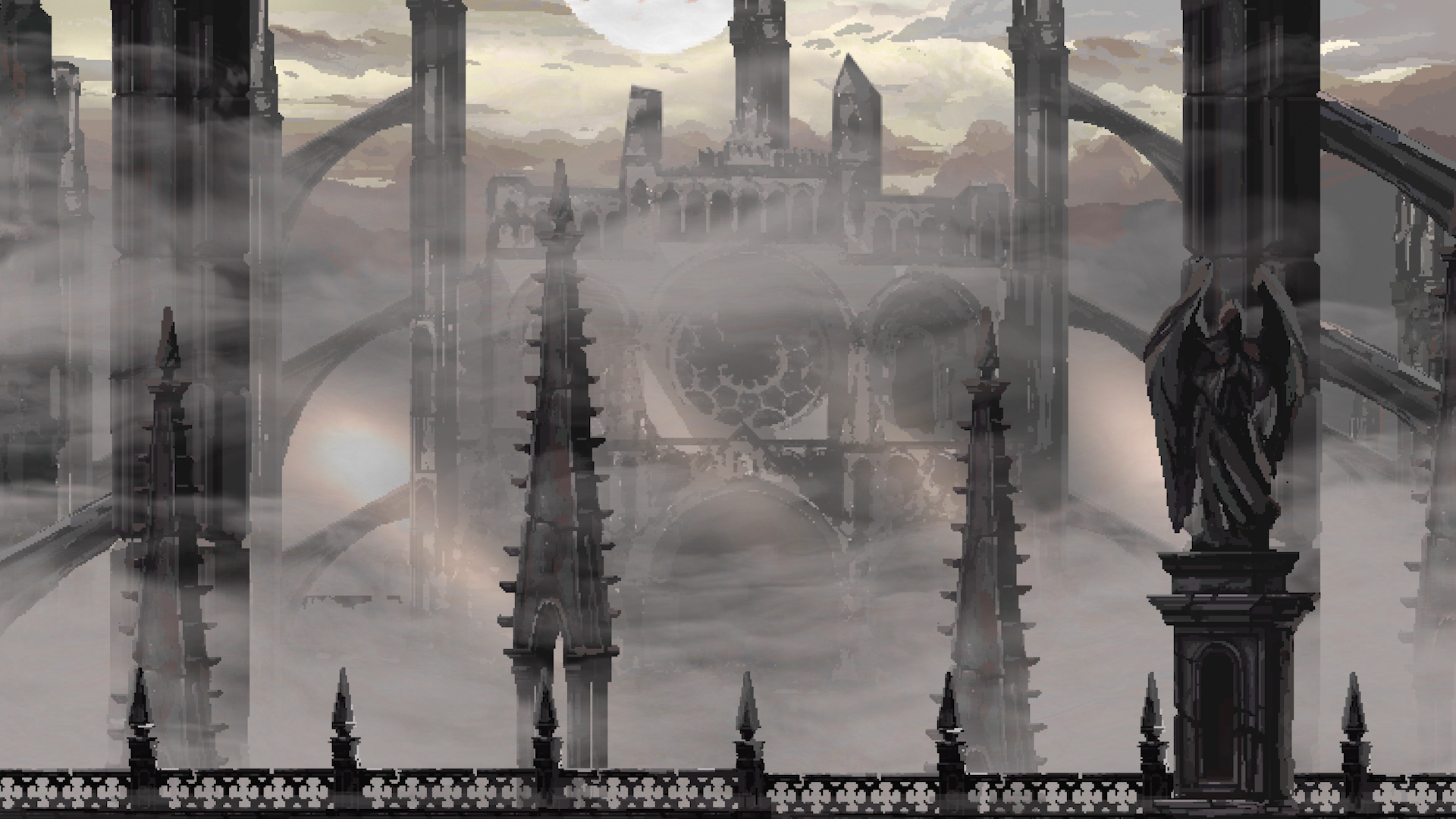 Moonscars’ art style resembles a gloomy oil painting and gives everything a washed-out gothic glow, whether in the castle or outside with its parallax effect. Even in the midst of battle, every animation is fluid and sublime, whether it’s an attack or a spell. As for the soundtrack, the audio effects and background music remind us constantly that we are in a macabre and gothic universe in a very nice way and match very well with the visuals proposed. 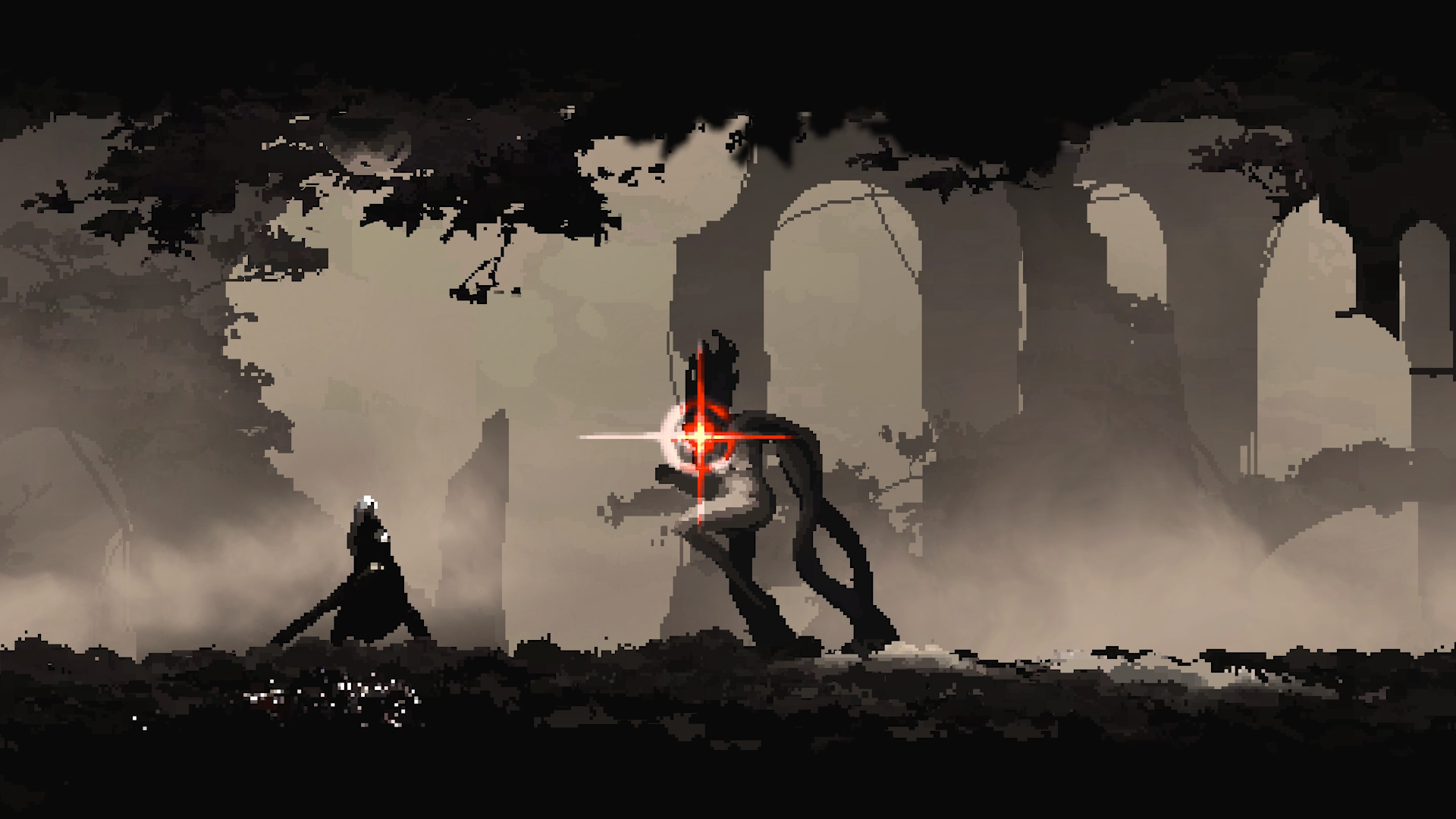 Moonscars has some great systems in motion but the unwieldy balancing issues make this an often frustrating experience. It isn’t all bad as there are some high points and while it is worth experiencing, be prepared to be frustrated and be prepared to die many times. Ultimately, Moonscars tries to do too much making it feel often overburdened with ideas.