A lot of the buzz surrounding Monark, the first game from FuRyu, was because the new studio was filled with former Atlus developers who worked on Shin Megami Tensei. That initial hype and subsequent anticipation are what I’m sure a lot of people were excited to play. Coming off Shin Megami Tensei V late last year, I was ready to dive in this month to see how Monark held up but I had some reservations.

I wouldn’t be surprised if you thought this was another Persona game since it often tries to emulate the same highs but usually offers the lows. Most Japanese RPGs introduce us to teenage characters embarking on some sort of otherworldly mission where the stakes are high and the end of the world is at hand. In this case, Monark offers that wrapped in a horror-lined basket that won’t work for some players given the identity crisis the game seems to have.

Set within the Shin Mikado Academy in Japan, you play as an amnesic student with a very little exposition on what is happening. Surrounded by a barrier that drives those who encounter the deadly mist insane, you head to the Otherworld, a dimension where daemons roam freely and where the Monarks reign supreme. Using the Seven Deadly Sins to correspond to each Monark, a strong daemon who has forged a pact with an equally strong human to wreak havoc. With the help of Vanitas, the eighth Monark will help you stop the devious Pactbearers out to destroy everything.

A lot of the supporting cast is nothing more than familiar tropes the genre can’t seem to break away from. You’re left exploring the academy to search out the Pactbearers — with the seven targets inhabiting an area of the grounds and you’ll need to make your way to them. A lot of this tends to lead to puzzles while clearing the deadly mist from the school but be warned there is a madness meter where you’ll need to complete tasks before time runs out. 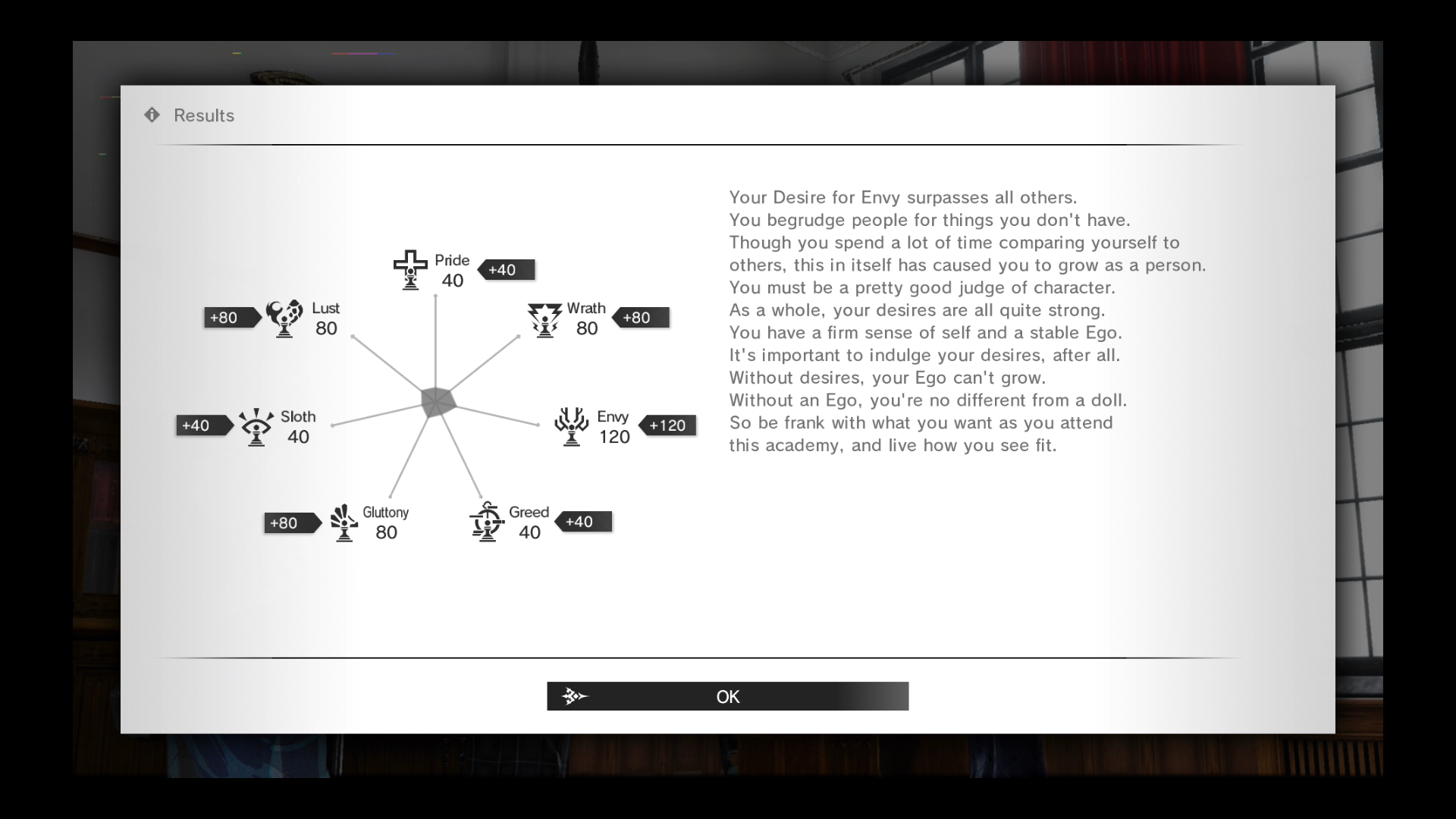 To make things even worse, many of the hallways and with very little incentive to go out of the way to explore your surrounding — for risk of ending up going mad and waking up in the nurse’s room. I wasn’t a fan of exploring because of how little there is to see or do and it’s a shame the developers didn’t spend time to address these issues.

Speaking of issues, the character models themselves are serviceable and little more than that. I don’t understand where the disconnect happened when the developers were putting these pieces together but everything about them falls flat. It’s a weird and disjointed mess seeing some of the more important Monarks sport detail but the environment that houses them feels like nothing more than a placeholder for a wing of Shin Mikado Academy. 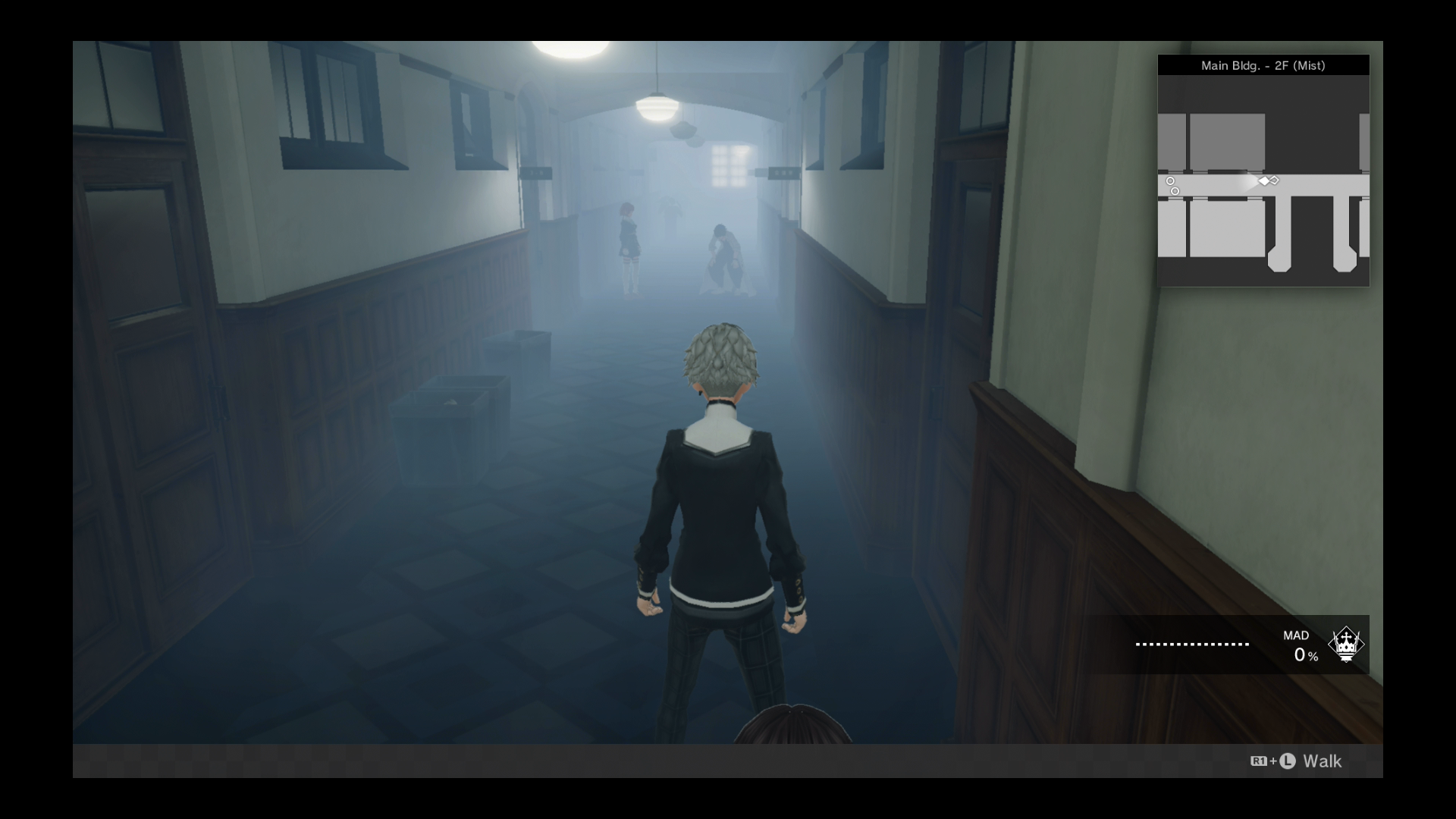 Battles in Monark are turn-based and feel about as familiar as any Atlus game does. I enjoyed the game’s sometimes unforgiving difficulty level but it’s clear this isn’t going to be for everyone. Enemies tend to overwhelm and like older Persona games, if your main character dies in battle, the game ends. Both enemies and allies are free to move around the battlefield to attack each other. To round out your party Fiends, skeletal-looking monsters with customizable abilities and equipment with both Arts and Authorities to choose from. 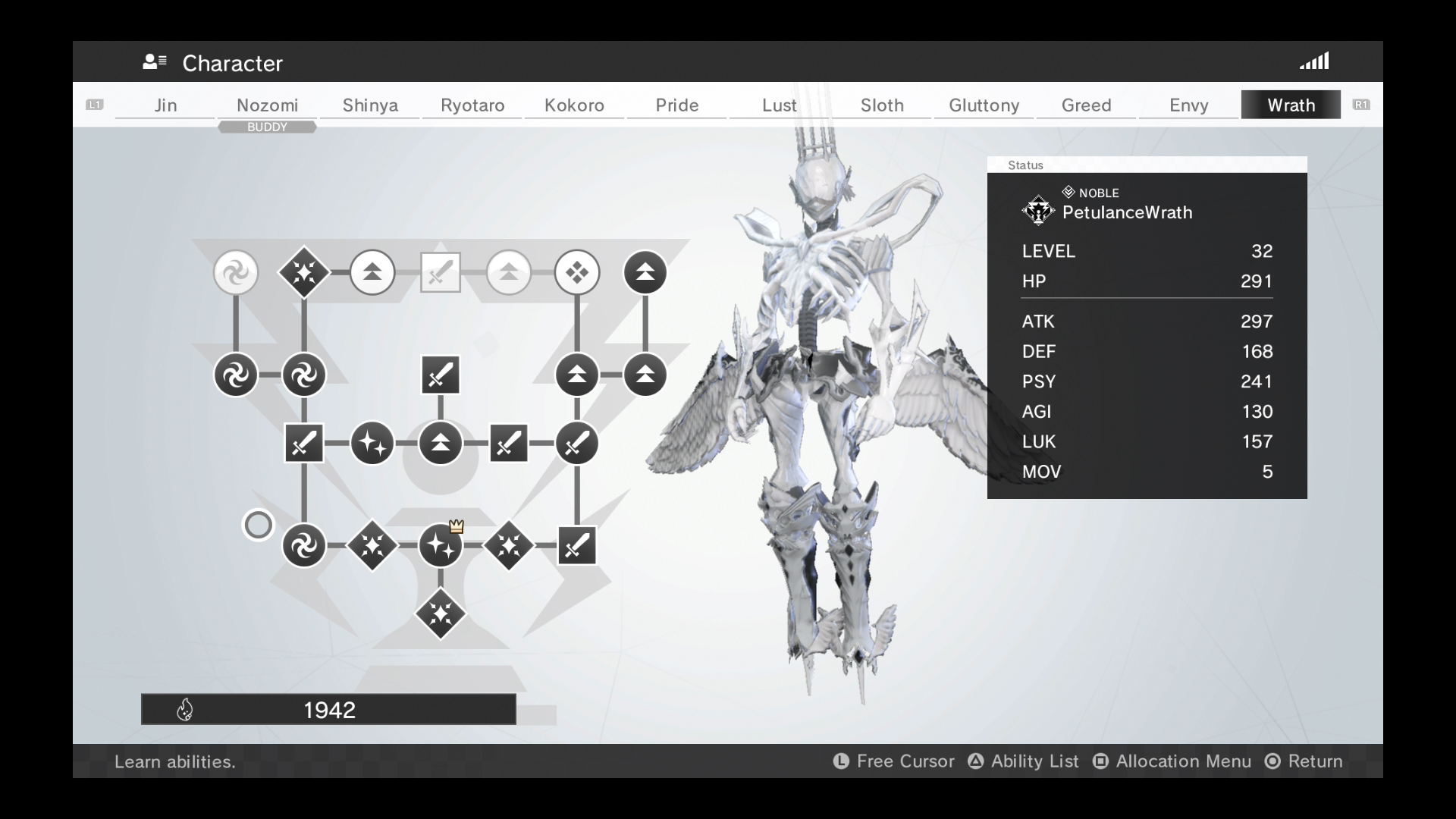 What I liked about Monark’s battle system is how the Madness gauge goes up when you use an Authority attack and when it fills, your Fiend ally gains a stat boost at the expense of losing control. Similarly, the Awakened gauge ties to your human allies and while you can move them about the field, the gauge incrementally goes up when attacked. In short, these add a fun strategic layer to the game that I believe often makes battles far more involved. 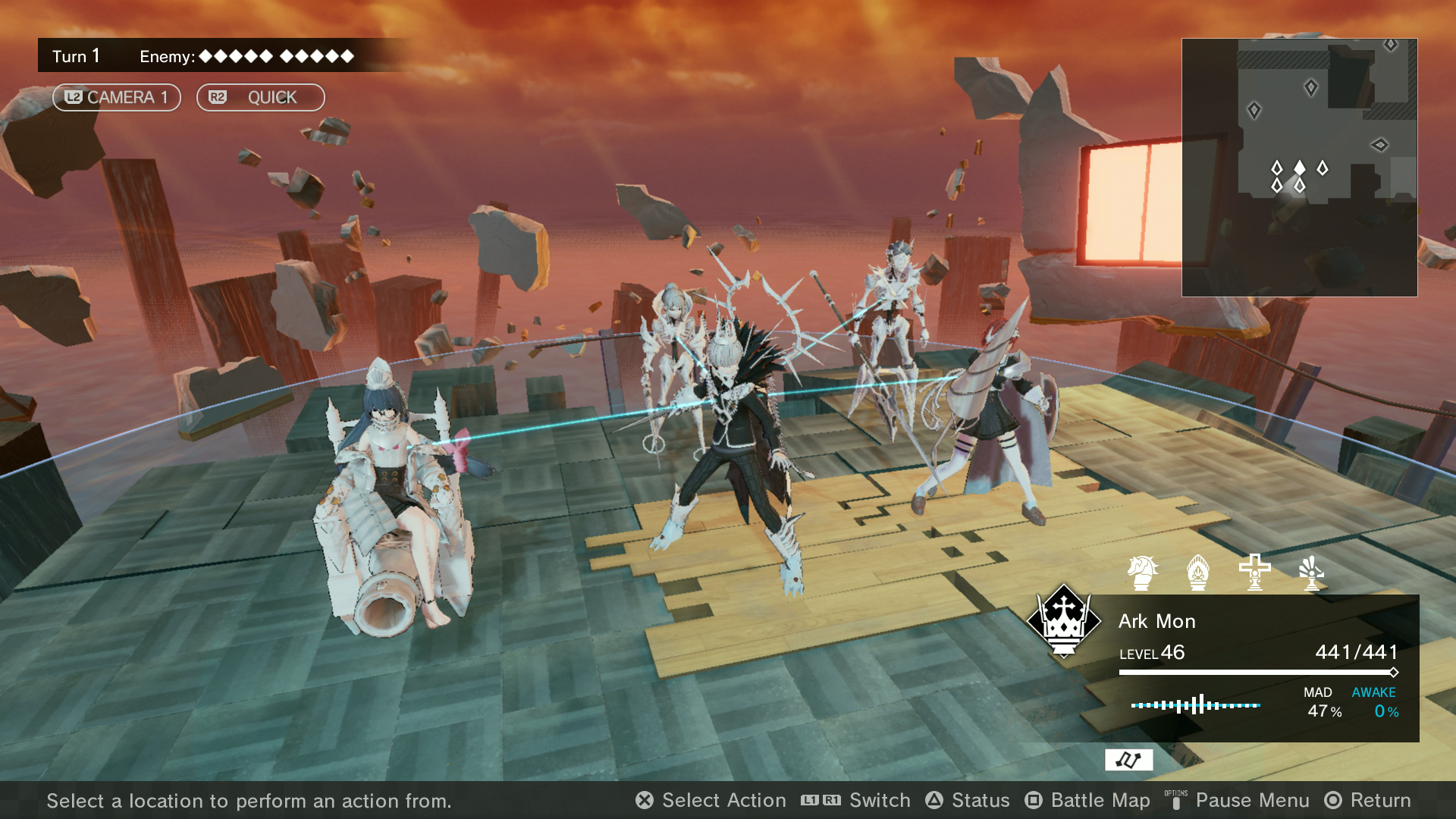 After completing battles, you gain Spirit instead of experience as many RPGs normally dole out. Spirit serves as a premium currency used to not only purchase items but also make your party stronger and is awarded on how well you perform in battle. This system is equally intriguing and frustrating as it offers something different from the norm but at the expense of enjoyment.

With spirit, you upgrade nodes that also boost your level alongside your stats, which is fine but this system tends to deviate in such a way that the game stalls progress. I don’t mind having to grind out a few levels to move forward but not as much as Monark forces you to because of how tediously the system is designed. 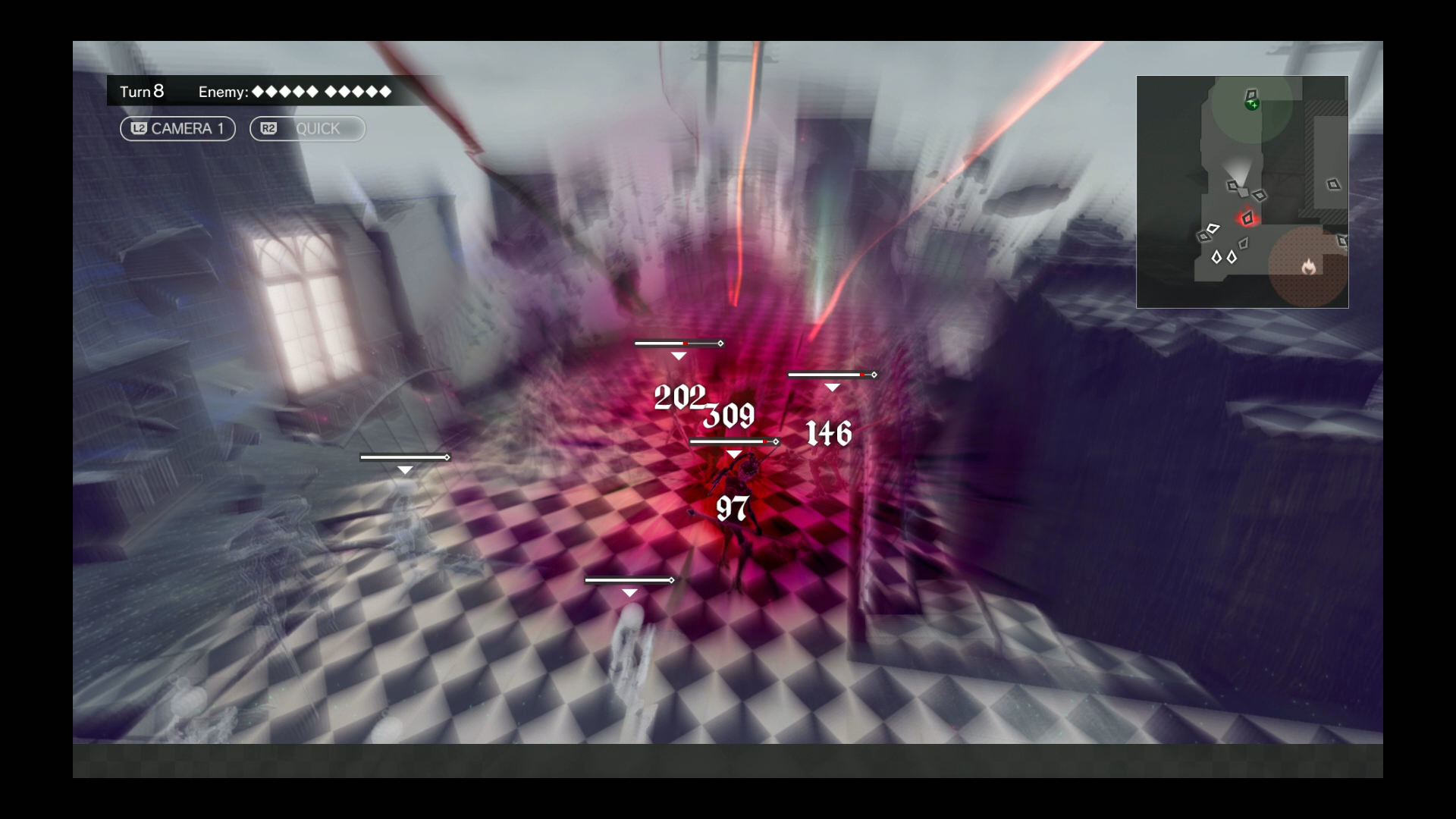 I had some exciting moments with Monark but if there’s ever going to be a sequel, the developers need to revisit all the issues the game currently has. Under all the grime are some great ideas but the execution leaves a lot to be desired.

Monark tends to stumble before catching itself. As a JRPG, it’s exactly what you would expect from the genre and while Monark doesn’t do anything particularly well, it isn’t bad at anything either. There are moments where the story shines but to even get to those segments you’ll have to work your way through a lot of needless grinding that doesn’t respect players. Imitation is the sincerest form of flattery but not this time.