Take Me Out To The Ball Game

It doesn’t feel like it’s been a year since we reviewed MLB The Show 15, but, here we are with the next game in the best baseball series available. This is the second entry that has been released on PlayStation 4 and somehow this game has gotten even better looking from a year ago. Sony San Diego has once again brought us a solid and important game. This year, the team has once again made improvements to both lighting and shading, creating a much more realized version of every player and stadium. I want other developers to take notice and bring on the competition as I am yet again blown away by what is done here. The amount of new content Sony San Diego added this year is ridiculous. There’s over 400 new animations, new batting styles, team specific celebrations, and each mode available in the game received some touch-ups to make them even better.

The pitching in The Show 16 is some of the best I’ve had the pleasure of experimenting with, and coming off last year’s entry feels great. Pitching here is intuitive and fun, you get cold and hot zones that show you where the batter has better chance to hit the ball or miss, and the shoulder buttons let you choose the pitch type. This year the AI is some of the best I’ve seen in any sports title, assisting me on plays, creating choice times to steal, preventing any bases to be stolen.

Road to the Show is easily my favourite mode and it returns once again allowing you to start at the bottom, create your desired player and build upon them in every way you want. You’ll be playing a ton of games in succession. This year it’s a bit different as you’re encouraged to keep playing and even allowing you to upgrade your created character in a menu without having to exit to a new screen. It’s much more streamlined this year and is a heck of a lot of fun. Diamond Dynasty returns once again, Sony San Diego’s version of Ultimate Team found in Electronic Art’s Madden, NHL, and FIFA series. This is the second place I spent a lot of time, hoping to unlock all-star players and get more stubs to put together the perfect team. Its fun and addicting if you let it be. Inside Edge, which analyzes player attributes in real games reflects onto your game with each game and is reflected in their attributes making them better or worse depending on how they did that day if they played. Legends return as well, with dozens of new flashback cards to find and earn. Battle Royale puts players against players in an online elimination mode where you have three innings to win. You are required to entre using stubs, but if you lose you are at least guaranteed a card deck. As you win you are the greater the reward will be with more card decks to obtain. If you lose too many games instead, though, you’ll be removed and lose your entrance fee.

Online play is the weakest aspect of MLB The Show 16, over eight games I spent playing online I noticed input lag when pitching or batting causing mild frustration. This is a persistent issue as of this review.

Like last year too is the stale and cardboard commentary, Steve Lyons and Eric Karros are the epitome of page readers and provide no real excitement or involvement other than a paycheque it seems, once again I am forced to mute the in-game sounds and flip my Spotify on to make my time better spent. This is my major gripe, and hopefully one that will get a much-needed overhaul next year.

Saves carry over here and allow you to use your saves in both franchise mode and Road to the Show.

MLB The Show 16 is a worthy addition to the series, improving on many things that Sony San Diego did right last year. Whether you’re a baseball fan or someone who is only mildly interested in the sport, there’s an overwhelming amount of content here to provide endless hours of fun in many modes, mini-games and more. 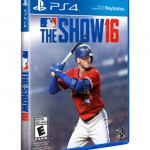