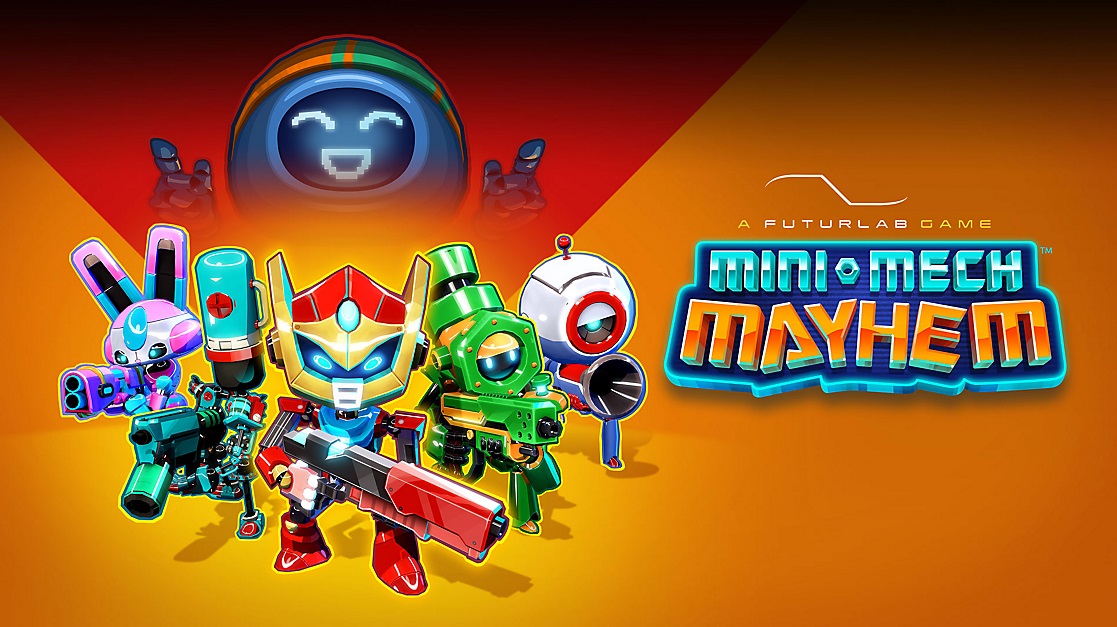 As virtual reality games continue to be released for various headsets, developer FuturLab wanted to create a unique experience that could only be found on PlayStation VR. There are numerous single-player adventures that resemble a tech-demo presentation as various developers want to create something new and unique, but they offer less in replayability as you will most likely only dive within the world they have created to show to friends as they come over. However, Mini-Mech Mayhem stands apart from the crowd as it offers a unique turn-based experience that will require strategy as you compete against AI, or combatants from around the world.

Mini-Mech Mayhem welcomes you to its colourful world by first letting you customize your own character before joining the battlefield. You creativity will be welcomed as there are numerous options available to bring your creation to life. I must admit I spent a little too much time perfecting my character, which was worth it as you will later see them moving along the game board, pushing and firing at enemies to gain a victory point. There were moments where text appeared on-screen that was very small and difficult to read, so it would have been nice to remove them from text bubbles and have the size larger, even though the words were of little importance. Your first engagement on the grid-based battlefield will seem overwhelming, but the implementation of an in-depth tutorial systems helps alleviate stress and make you a more competitive opponent. The tutorials are divided by across basic, intermediate, and advanced missions that give you the rundown of every aspect within Mini-Mech Mayhem. The basic tutorials will introduce you to the action phase as each turn gives players the ability to move or shoot in a specific direction. You are also not able to shoot or move three times, so a strategic mix is required gain a victory point. Three victory points are required to gain the upper hand. These can be achieved by standing on a specific square at the end of the round, or by eliminating an opponent. However, this is easier said than done.

Here is where the strategy comes into play. As mentioned, you will have to complete three actions each round, but you will not know the order of each action until the round begins and your actions are mixed in with your three opponents. You could be aiming at an enemy directly beside you, but they may have a turn before you and move away, or push you into a trap that grants them a point and forces you to respawn. Choosing to fire your weapon will present you with eight different directions and you can pin-point which body part you would like to aim at. Each will have their own specific effect such as firing at the legs will impact enemy movement. I have mentioned the strategic element to Mini-Mech Mayhem, but it can be argued that it is more luck than anything else. Consider for a moment, playing chess against three opponents and never knowing who would move next. It would be rather difficult to strategize your actions and the same can be said about your experience with Mini-Mech Mayhem.

You have three gameplay options within Mini-Mech Mayhem: tutorials, offline matches against AI, and searching for your kryptonite in the online realm. It is highly recommended to spend a few hours with the tutorials and offline matches first before venturing online, or you will simply watch your minion be the center of attention as you become the third loser. The three game modes offer a unique and enjoyable experience, but I am not sure replayability will keep players interested for more than twenty hours. The game’s pacing is on the slower side as each round takes an extended time to complete the actions of every player. I also wish you were able to remove the body of your own avatar as it can restrict your view of the game board. Utilizing the control consoles is also a bit tedious at first and will require some time to get the hang of. Players can use either a Dualshock4 controller, or PS Move controllers to navigate the consoles and input your desired actions. It would have been nice to simply pick up and move your minion as you do in chess, reducing the need to rely on the large consoles on the side of the game board.

Mini-Mech Mayhem offers a charming presentation, unique experience, and a great price. It is worth a look to all PlayStation VR users who want to embark on a new adventure. We can continue to argue whether it is strategic insight, or luck, that will grant you victory, but what we confirm is that it is definitely fun. Lead your mini-mech to victory today!