I surely didn’t expect Microsoft to reveal the Surface Earbuds in October 2019, but they did. For the past few years, the biggest trend in audio is shifting from headphones to wireless buds. Microsoft is also a company that does things differently from the norm, this is something we’ve seen in their laptops. It’s also now a trend transitioning to the Surface Headphones and Surface Earbuds. 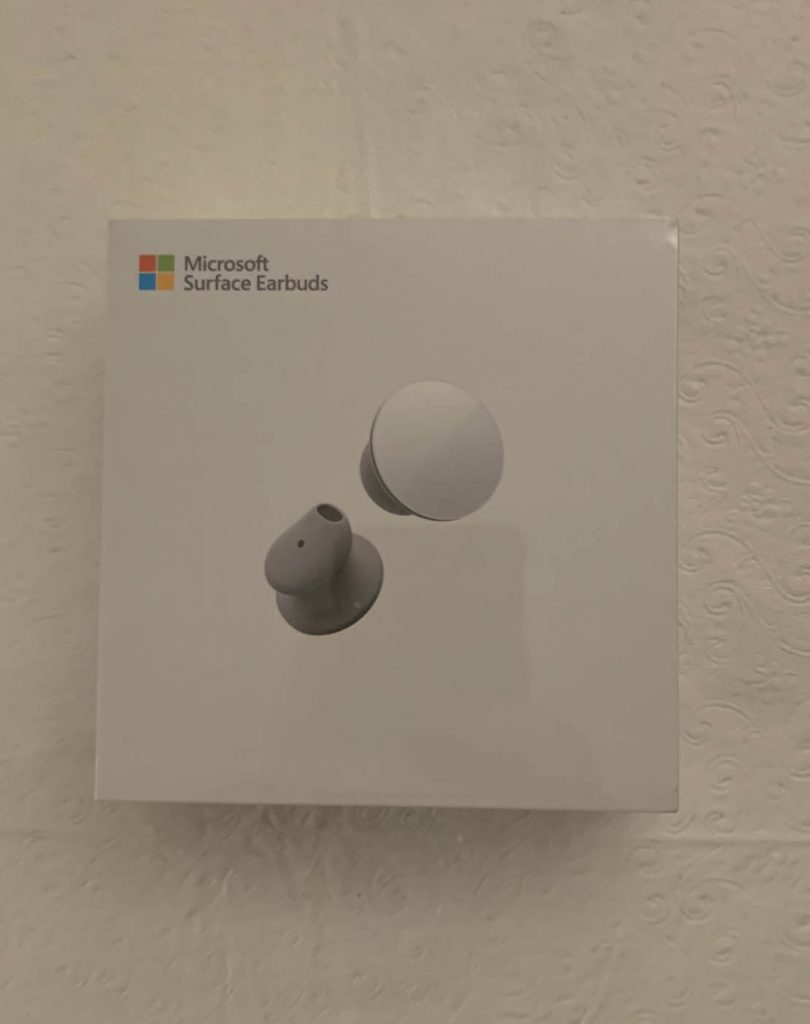 Many companies are now selling their own iteration of truly wireless earbuds and while most look the same, Microsoft has decided to do something different, making their Surface Earbuds huge. They look like spacers you’d use for your ears.

I wasn’t sold on the Surface Earbud design from the start. For one, they are huge! As this is Microsoft’s first foray into the wireless earbud market, I can live with that. The design aesthetic is part of the charm, and the larger surface is there for the touch controls built into each side. I know if you see the Surface Earbuds in the wild, you’d doubletake but let me be clear: they aren’t as big as the images make them look. 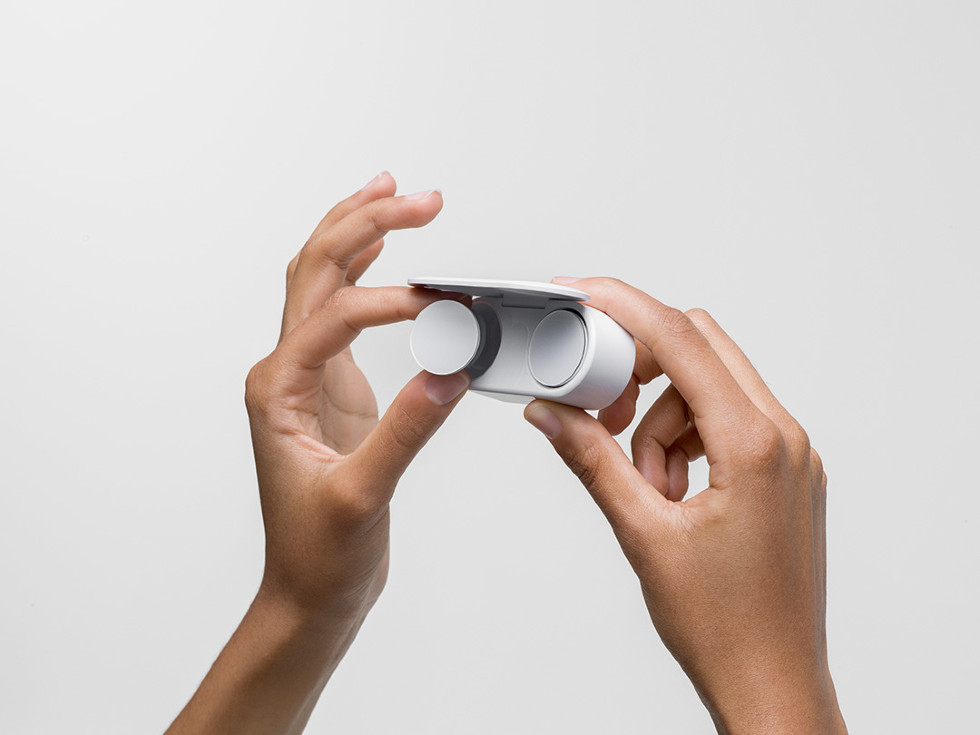 Even in my hands, they feel good, it’s just the outer part of the earbud that stands out. Other than that, Microsoft has delivered a product that does what it intends to do – play music, take calls, and dictate commands on PC. I thought the Surface Earbuds were made of glass, but they are actually made of polycarbonate plastic. They weigh 7.2 grams per Earbud and overall with the case weight 54 grams overall. It’s a lightweight accessory and in my jacket pocket are barely noticeable.

For me, fit is extremely important and that’s why when I learned I was reviewing the Surface Earbuds, I was worried they wouldn’t fit well. I’m glad to say I was wrong. I don’t have huge ears, not by any means, but as I mentioned, the outside of Surface Earbuds made me believe otherwise. When I opened the box for the first time and unpacked the Surface Earbuds, I found the included tips for different ear sizes. These range from small to large and can be mixed and matched to fit your ear. I stuck with the medium and found those to be comfortable, but the large fit just as well. 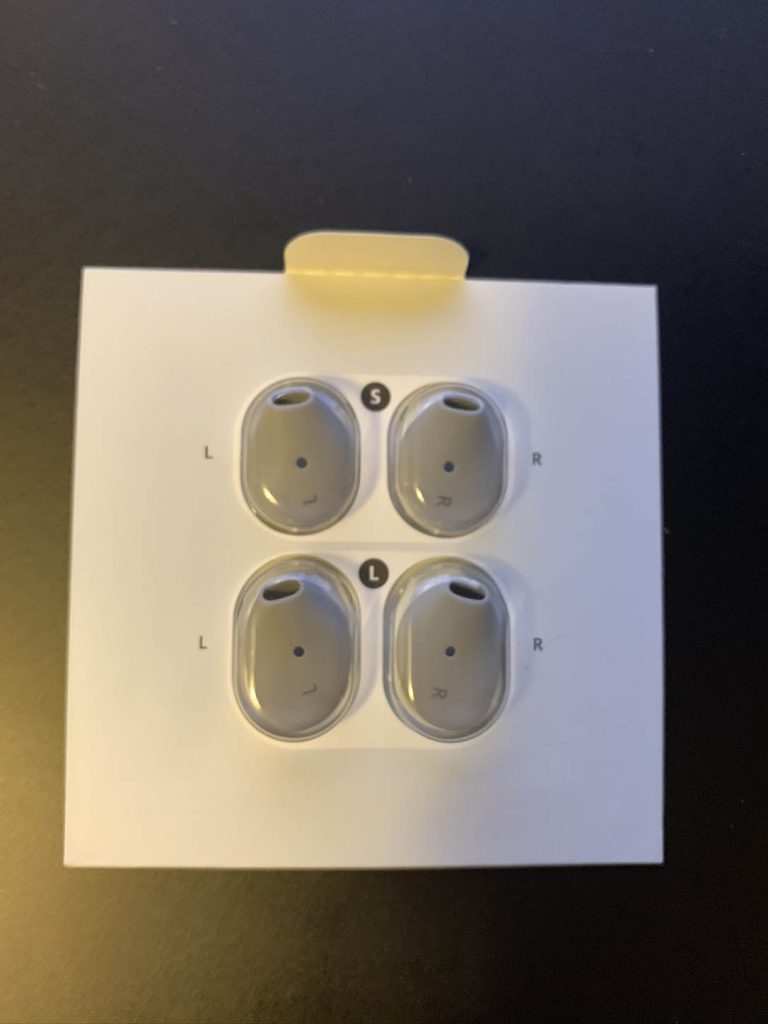 For the first few days, I had to remember to twist the Surface Earbuds into my ear. To start, you point the tip slightly downward, and then gently twist until it feels comfortable and snug in your ear. If you don’t do this, they are prone to falling out of your ear; which happened to me in public and while on the couch on my tablet.

The case resembles a pill, it’s a decent design but it feels uninspired judging by what others are doing. It’s got no lights on the outside to indicate what your charge level is, so to gauge how much juice is left you have to open the top up to check the level. Oh, and to pair the Surface Earbuds, the button is tucked away on the bottom, which to me, makes no sense and counterintuitive. This is the biggest case out of all the major companies, whether that is good or bad is up to preference; I prefer a leaner case personally. 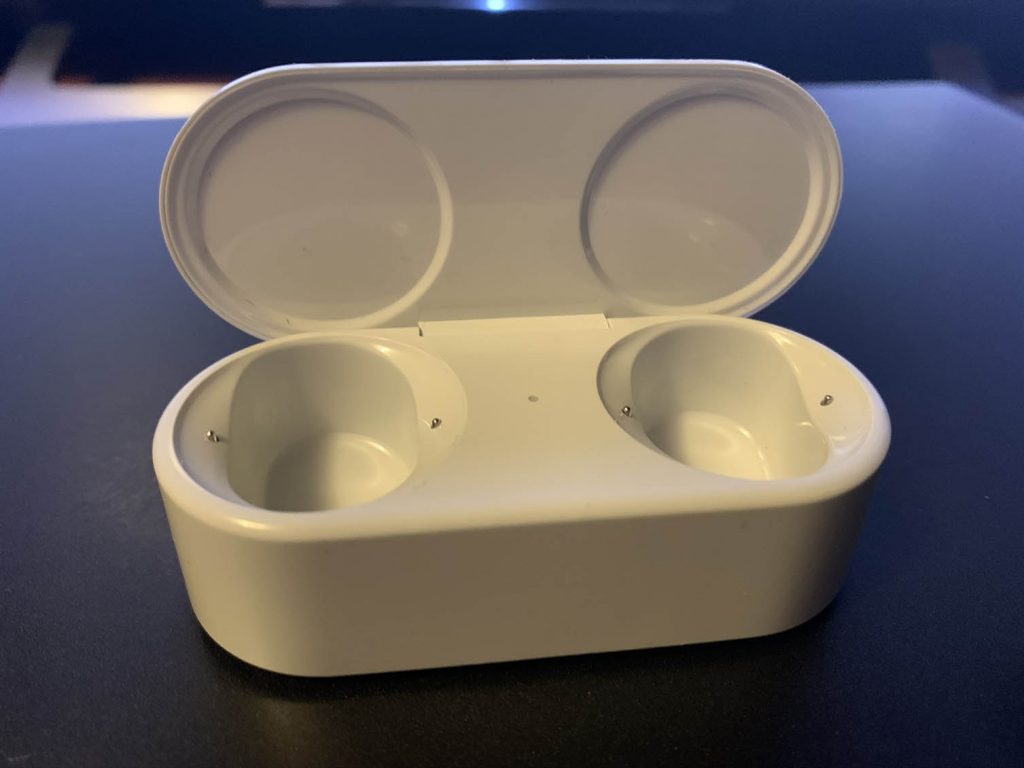 To charge the Surface Earbuds, you place them in the case. When the case needs to be charged, the LED turns red and the included USB-C charger will take over from there. When they are fully charged, the case offers an additional 16 hours of battery life, complimenting that 6-8 hours the Surface Earbuds offer. In total, the case takes an hour to charge, and you can confirm battery levels by downloading the Surface Audio app on your iOS or Android device. On PC, it’s available under Devices for those who sync them to a laptop or desktop. Conspicuously missing is the option to wirelessly charge the Surface Earbuds, it feels like an oversight from Microsoft. 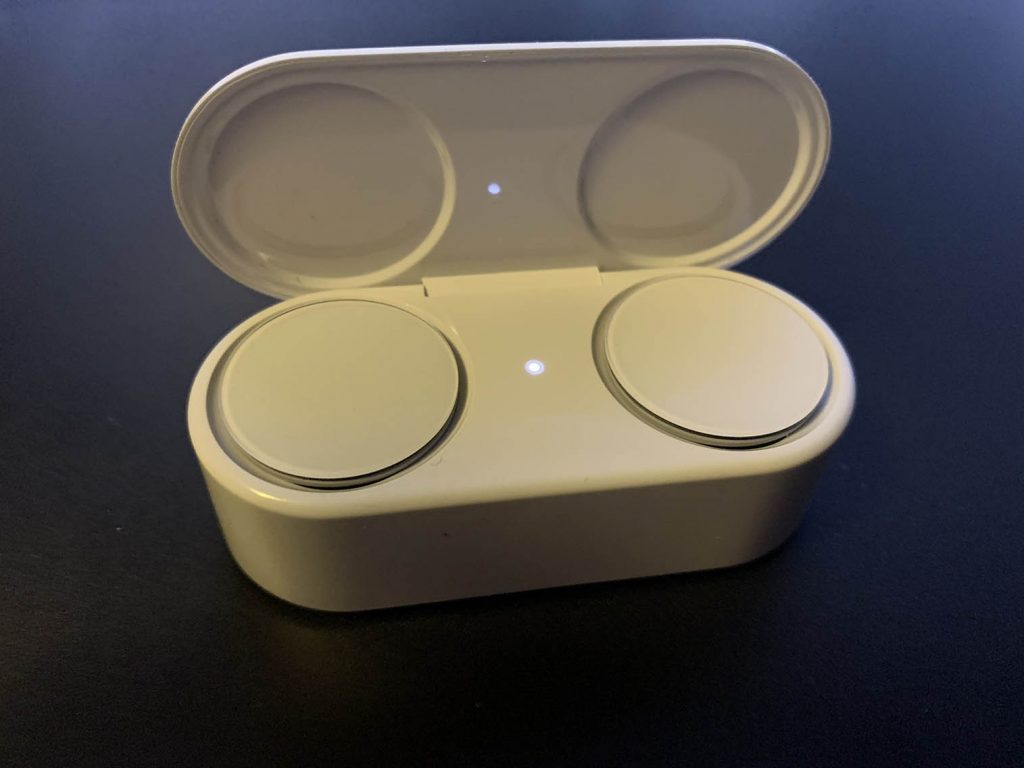 I am a fan of the touch gestures the Surface Earbuds offer but they don’t always work. A double-tap on either the left or right plays and pauses your music or ends your call. On the right, a touch and hold gesture will activate Siri or equivalent. The left ear manages music playback, so swiping forward plays the next song and swiping backward goes to the previous song. Lastly, the right ear controls volume with a swipe up raising volume and swipe down the lowering volume.

The Surface Audio app is barren of features but its also clean and easy to navigate. There are very few things you can adjust aside from a handful of premade equalizer settings. Unfortunately, other than being able to gauge how much battery is left for each Earbud, I barely used the application on my phone. I hope we see improvements in the future but it’s only out of necessity that I ever use the app to see if any updates are available.

Overall, I came away liking the sound. Microsoft usually delivers excellent sound in its products and the Surface Earbuds are no exception. Audio sounds crisp and clear, there’s no doubt about that. Again, this is where preference comes in and someone else might prefer the AirPods or Galaxy Buds instead, but I have no qualms about the sound these produce.

Using the Surface Audio app, users have access to a five-band equalizer, allowing you to adjust the sound to your liking. If you like to play around with the lows, mids, and highs, it offers that, but it feels limited in features. Inside the Surface Audio app is also a handful of tutorials for owners to learn the ins and outs of their earbuds. There’s also an initial firmware update that lasted roughly an hour before I could even use them so be wary of that. There’s also no way to tell how much battery is left for the case, which could be a useful update to the app in the future.

I answered a few phone calls and used the Surface Earbuds for a meeting, and they delivered a good experience. I can’t stress enough how important quality is when on a phone call and I was worried audio might be compressed or muffled. There are two integrated microphones to help deliver a palpable sound: one for voice and one for dictation. Microsoft offers the ability to dictate through Office, which might be useful during a PowerPoint presentation.

Microsoft’s first attempt at truly wireless earbuds are good. They have clear audio for calls, music sounds crisp and clear, but if you require a bit more bass then you might not like these. They are also comfortable and can be worn for extended periods of time, but the lack of noise cancellation is a bummer. I dig the design after using them, but they aren’t for everyone and feel like a niche product. Ultimately, these are overpriced for what they offer but the long battery life, touch gestures, and solid sound on top of the comfortability they offer stand out. At the end of the day, it all comes down to preference and Microsoft packs a lot of positives into the Surface Earbuds.

The Surface Earbuds are available now in Canada for $259.99.

Read more at MobileSyrup.com: Surface Earbuds Review: Comfort over everything

[A pair of Surface Earbuds were provided by Microsoft for review purposes.]