Microsoft Flight Simulator is a title that takes off the ground with incredible levels of technical achievement to achieve.

What Microsoft and Asobo Studio of France have created is a real-time flight simulator. One that takes nearly 40 years of aviation and software development know-how, as well as current technology like Bing maps and Microsoft Azure, to create something that is only going to keep on flying throughout the years.

Perhaps the highest cost of admission to Microsoft Flight Simulator is its hard drive requirements. The Standard Edition of the game will take up about 135GB, with the Deluxe Edition sitting around 150GB and the premium in the 200GB range. Microsoft Flight Simulator is one of those games you want to boot from an external drive if you’re worried about preserving space on your unit.

However, it’s quite amazing how little even 200GBs is when you consider that Microsoft and Asobo have over two petabytes of data accessible through the cloud for the game to perform in-the-moment, should you choose that as being how you want to play.

It’s seemingly brand-new territory for Microsoft to have so much available at all times. So they enlisted the help of Blackshark.ai to create an artificial intelligence tool that utilizes data from Bing Maps and Azure to create photorealistic renderings of much of the world.

Now, this is not to say that Microsoft Flight Simulator’s technology gets it right all of the time. Much like Google Maps, the game is hindered by the age and relevancy of the data it pulls. I noticed one Twitter friend point out that a flyover of Rogers Place in Edmonton shows up as a pre-construction pit instead of the gloriously Darth Vader-like arena that it currently is.

Processing in denser areas also suffers from draw distancing and the game’s ability to render environments. Flying around cities like Toronto is acceptably beautiful at a distance and an altitude. The game’s vast draw distance captures skylines and topographies in a way that I can think of nothing to compare it to. As I took to flying over different parts of the city, I noticed that buildings with increasing density began to smudge or become sharply contoured — but I was also flying at a hight that would be panic-inducing if achieved in real life. I noticed this sluggish rendering being a problem in blockier European cities. Doing a flyover of Dublin and Edinburgh revealed areas where block housing and buildings suffered from an increased amount of smudging.

If you look out your window on the right, you’ll see precisely how powerful your graphics card is

Microsoft Flight Simulator’s vision of the world is going to be best realized on the Nvidia 30 lineup of graphics cards. As it stands, the sim pushes current high-end graphics cards to their max. I am playing with an Nvidia RTX 2060 that I purchased in May of last year, and I can just hit “high” settings played at 2K resolution at a constant 30fps  regardless of the terrain I’m flying over.

I know that I could likely rev my flights up to 60fps if I sacrificed “high’ settings in exchange for “medium” — but I’m taking to the skies for realism over performance, so this is a sacrifice that I’m willing to make. 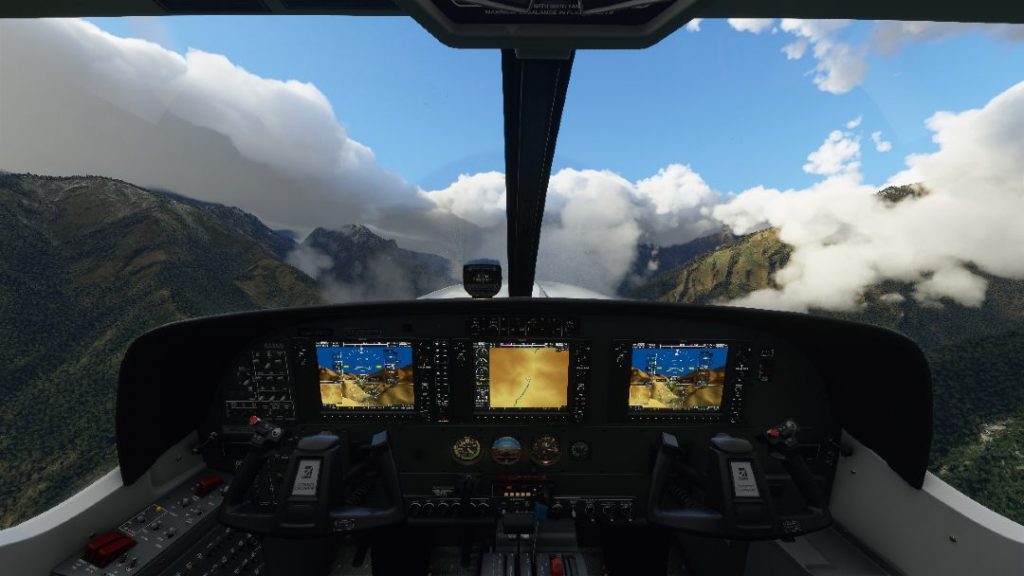 I’ve found that once you get to cruising altitude, you’re going to get an astonishing view at whatever settings you’ve got locked in. The higher you go, the more shape, light and life you’ll notice.

Microsoft and Asobo intend for this to be an experience that is enjoyed in 4K. The problem is that current 4K PC technology is rare and expensive as it’s locked away behind the “ultra” category of the market. Most players are likely playing on setting below what’s intended, and even those with 4K rigs have reported problems with dropping framerates and renderings. But to Microsoft and Asobo’s credit, this is the perfect time to get ahead of the fact that PC technology will soon be able to take advantage of 8K gaming.

However, if you are a person able to drop $160 Canadian on the premium edition of this game, I guess that you see this as an investment — or you just can’t stand missing content! Am I safe to assume that this is a game that sicking around with you for a while — space constraints and all? Technology is on the cusp of improving, and so too is Microsoft and Asobo’s vision for the future.

Microsoft and Asobo have included physics, weather and lighting systems that are so cutting-edge that they operate independently. Atmospheres will appear brighter as you get closer to sources of light pollution like cities, sporting and concert venues or academic or cultural landmarks. Lighting makes for some amazing night flying. I had one flight where I was leaving Seattle on my way to Las Vegas. Flying out of the city, I was able to use car lights and street lamps to keep my bearings. But as soon as I got into the mountainous countryside,  I found myself needing to trust my dashboard tools as there were no longer any lights to guide me.

The physics system will fight you at times. While I wasn’t able to check it out for myself, I’ve heard tales of how hard it was to deal with adverse weather patterns as a result of Hurricane Laura. Microsoft Flight Simulator’s real-time weather, as well as increased physics, now means that how you fly can change in an instant. Those familiar with previous series entries are likely to find that things like rolls and turbulence are far more unique and less procedurally generated, thus requiring greater finesse and attention to your tools now. 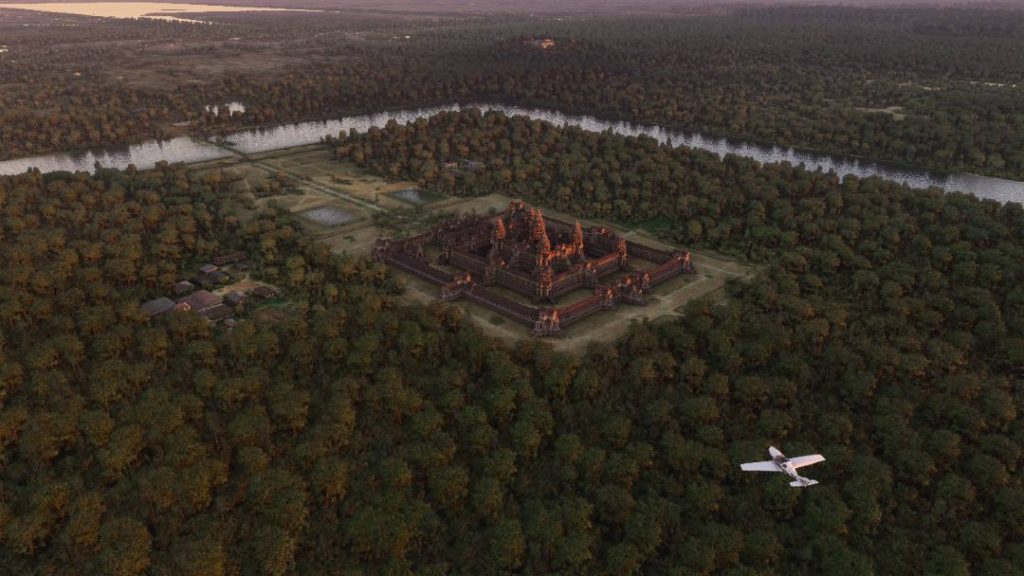 Microsoft Flight Simulator’s greatest strengths rest in its engines. Several members of the Asobo got their pilot licence during the production of this title, and it shows. I’m not the first to say this, but you can download a pdf manual for a real-world plane you’re at the controls of and if you manage to get past the technical speak, the manual is likely to help you in-game.

There’s no doubt that cutting-edge technology and engines will keep this simulator soaring for years to come.

The pilot state of mind

There’s honestly been so much on my mind these past few weeks and months just in terms of life, so I’ve been enjoying just shutting my brain down and taking to the sky. And Microsoft Flight Simulator makes sure that you’re able to do it with full control over even the most minor of details while not forcing anything upon you.  There’s a series of optional flight classes that will guide you on the finer elements of flying.

In my case, I found that I needed to complete them two or three times to start to get a feel for flight as it’s been a while since I took to a Flight Simulator title, and it can be tough to feel human guidance and connection to the AI instructor. After that, the game offers you a series of curated flights and challenges that will help you faster progress through the in-game levelling system, but you are free to do as you please.

The teacher lets you know that the goal of all this is to get you into the pilot state of mind — where controlling your wings and taking things in is second nature. 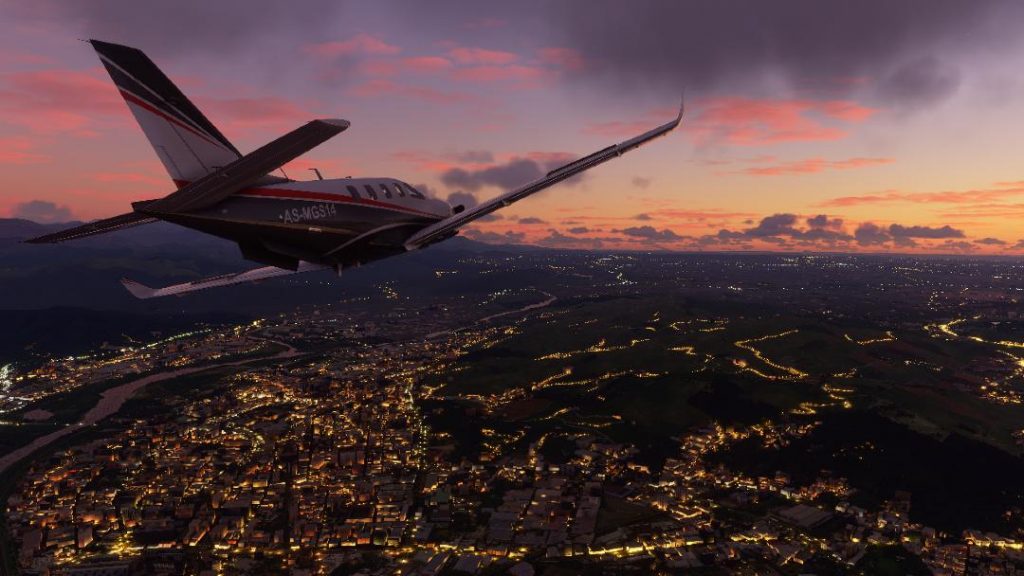 Despite the environmental impact and the pressures on our ears, humans were meant to fly. To experience aviation is one of life’s greatest joys. And Microsoft Flight Simulator understands that so well that it makes sure you feel free every step of the way.

And the way that they’ve simulated the act of flight and the control you have over it is going to keep you coming back because it’s all on you.

Flights have to have a starting destination, but once you are in the air, you’re forced to follow no rules but your own — and the ones that keep you airborne! You’ll be able to see landmarks and landing zones marked as they spread around the globe. You are also free to set your flight times and weather conditions with 1:1 online conditions through Microsoft Azure or tweaked exactly the way you wish.

I found that one of my favourite features is the autopilot control system. There’s a heads-up menu in-flight that allows you to pass off flying and communications duties with the computer. I found myself enjoying handing the controls over to the autopilot on several voyages so I could just marvel at the sights out my window. I mentioned that it’s been a tough few months, and just having that ability to worry about little more than fuel level has been incredibly helpful in not only relaxing me but also in learning the ropes better and refining my flight skills. 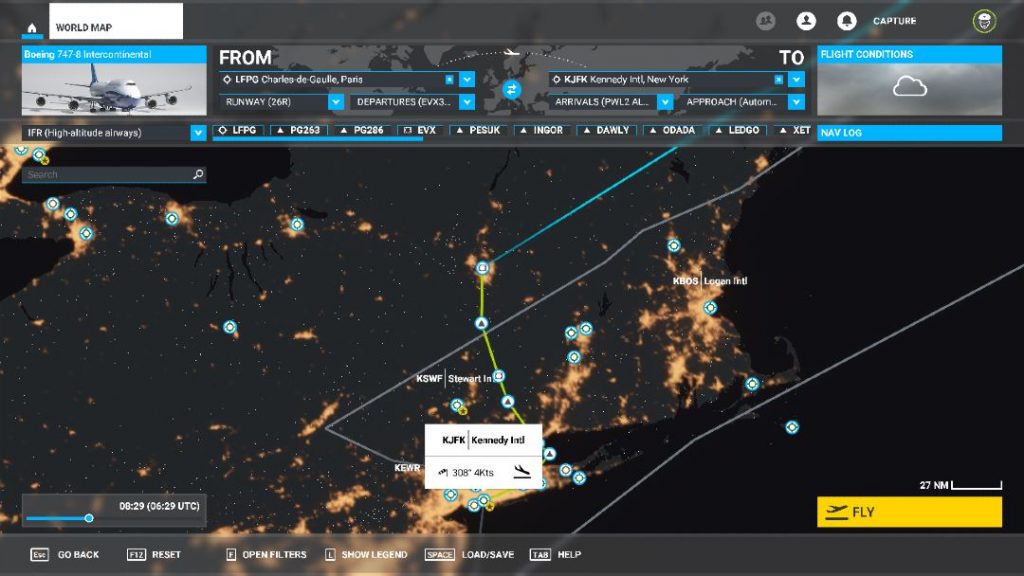 Microsoft Flight Simulator really isn’t a game, but it really is the most ambitious thing in gaming. The only things I can hold against it are how it makes my high-end rig perform low at best. And that it made me feel a little too dumb and unsupported to get off the ground. However, everything from the cloud servers and engines at play in this title makes for an aeronautical environment that is only going to continue to grow and get better.

What else is there to say aside from it’s all up from here?