I’ve been blinding by my desire to get my hands on Metroid Prime 4 that I forgot how great classic Metroid games can be. Sure, Metroid: Samus Returns may have been a great remake, but it didn’t cover anything new, essentially being a remake of Metroid II. Now, nearly two decades later and we’re getting a follow-up to Metroid Fusion with Metroid Dread, the conclusion of the Metroid story arc. Samus Aran is a special character and while it is far past due, it’s nice to see Nintendo giving her the stage she deserves once again.

MercurySteam returns to co-develop Metroid Dread with Nintendo. The studio that once worked on Castlevania: Lords of Shadow for Konami before being recruited to work on Metroid: Samus Returns once again helm developmental duties.

Metroid Dread is the conclusion to a decades-long saga

Canonically, Metroid Dread takes place not long after the Game Boy Advance title Metroid Fusion. Samus Aran returns after eradicating the last Metroid and learns of the survival of the X parasite, something we all assumed vanished in the last game. Upon learning that of its existence on the planet ZDR, our heroine is dispatched to investigate and uncover the truth. Furthering the cause for concern on ZDR, the E.M.M.I. robots have stopped relaying research and have stopped all communications, leading us into the opening moments of this auspicious follow-up. 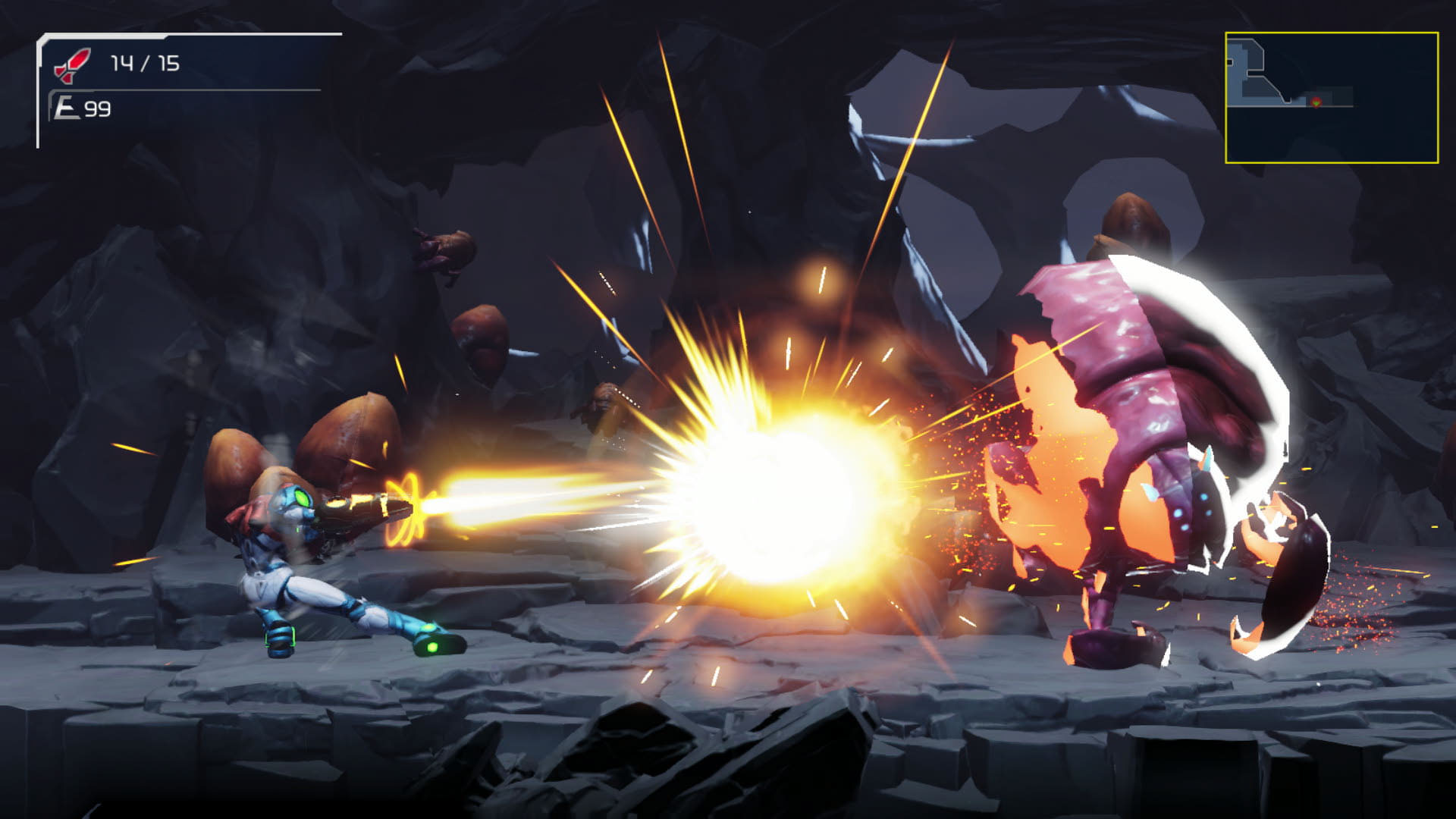 Things go about as well as you’d expect for Samus as she arrives on ZDR and by which, I mean not great at all. Samus’ abilities are quickly ousted from your arsenal, leaving you worse for wear and without the tools to survive on a hostile planet. You’ll have to work towards recovering your skills like the Charge Beam, the Spider-Magnet, and others thanks to an encounter with the mysterious Chozo warrior you meet at the start of Metroid Dread. 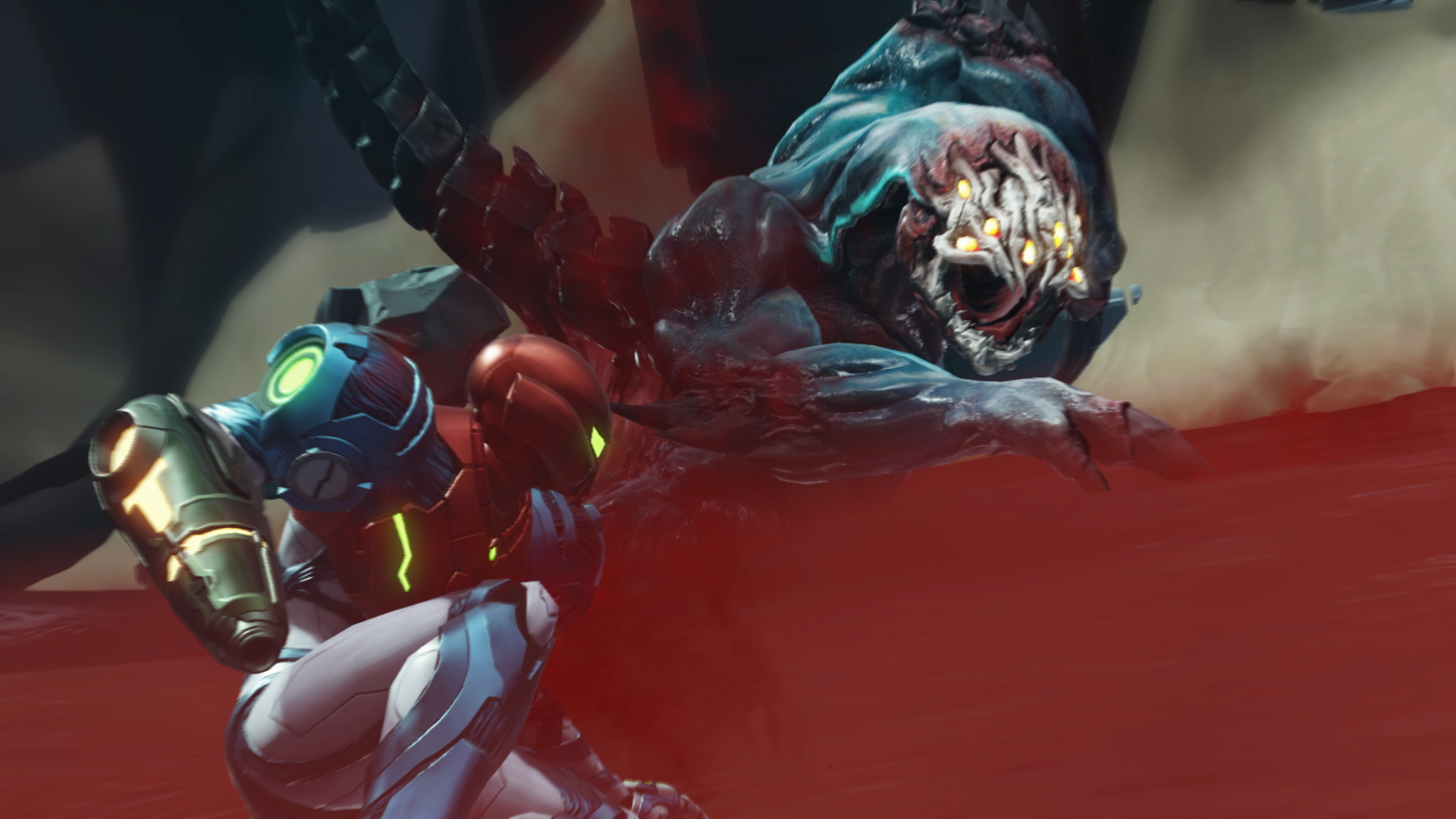 Samus has her work cut out for her and one look at the map shows how daunting a task it will be to explore yet another unknown planet. There’s much to uncover, nooks and crannies to explore and enemies to tackle. The Chozo warrior made quick work of Samus, and we join her not long she awakes somewhere far below the planet’s surface. In most Metroid games, you land on the surface and work your down toward the lowest levels of the planet. This isn’t the care with Dread, Samus is lightheaded but soon discovers she’s got her work cut out for her as she’s advised she needs to return to her ship pronto or risk an inevitable death at the hands of the E.M.M.I or worse. 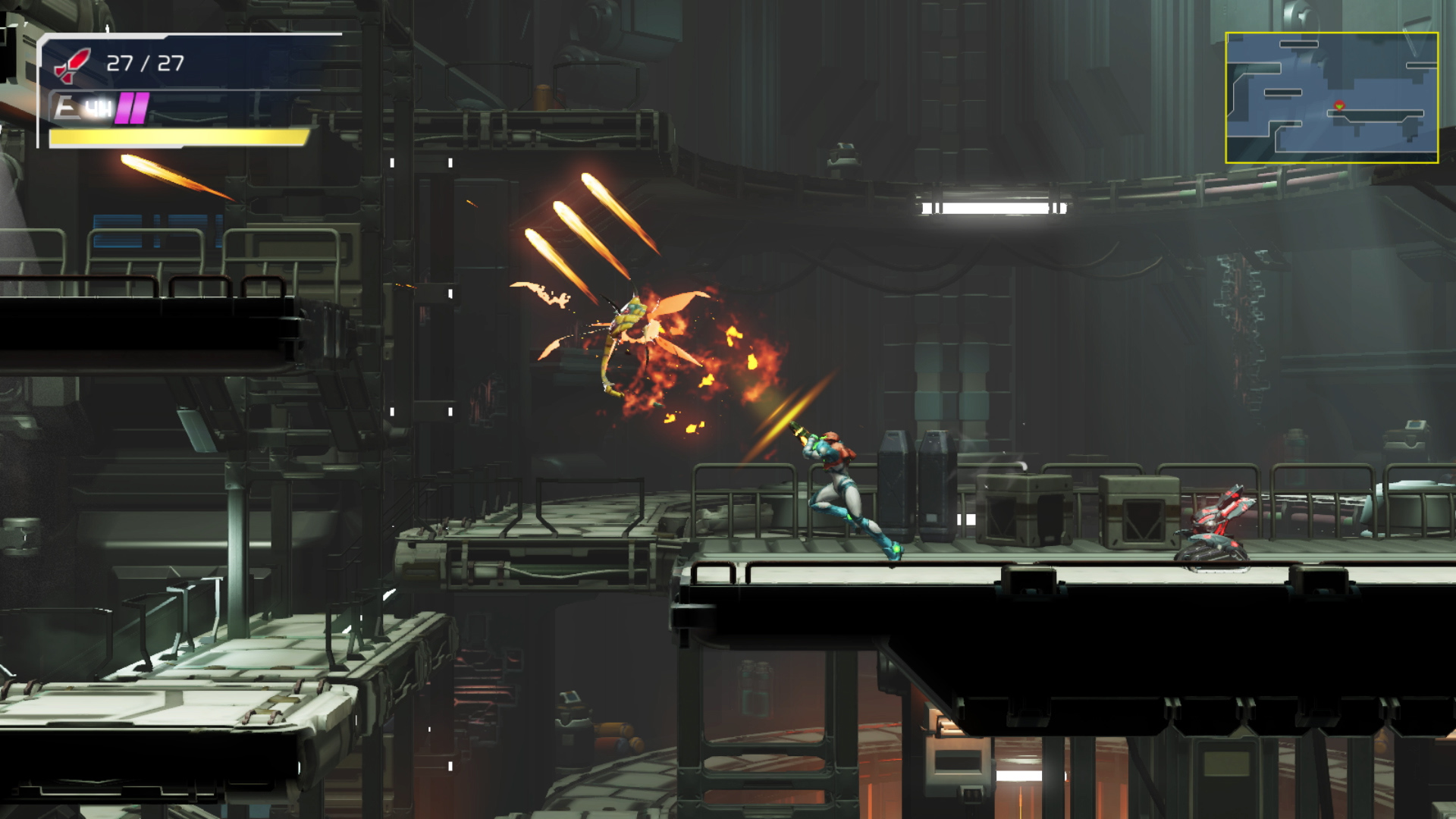 Combat is a big step up from Metroid: Samus Returns. MercurySteam has been given a bigger canvas to work with this time and it feels better on the Switch, you must commit to your actions or face the fallout of your decisions. Pitting Samus against a range of enemies is usually a challenge with some willingly charging at you to inflict damage. Most of the mechanics and weapons are throwbacks to the series past, such as the charge beam and spider ball, I’m also glad to see that the return of the free aim mechanic, that lets you shoot precisely in any given direction with the left joystick and the counter-melee attack which needs to be timed and sends the enemy back and exposed when executed correctly. 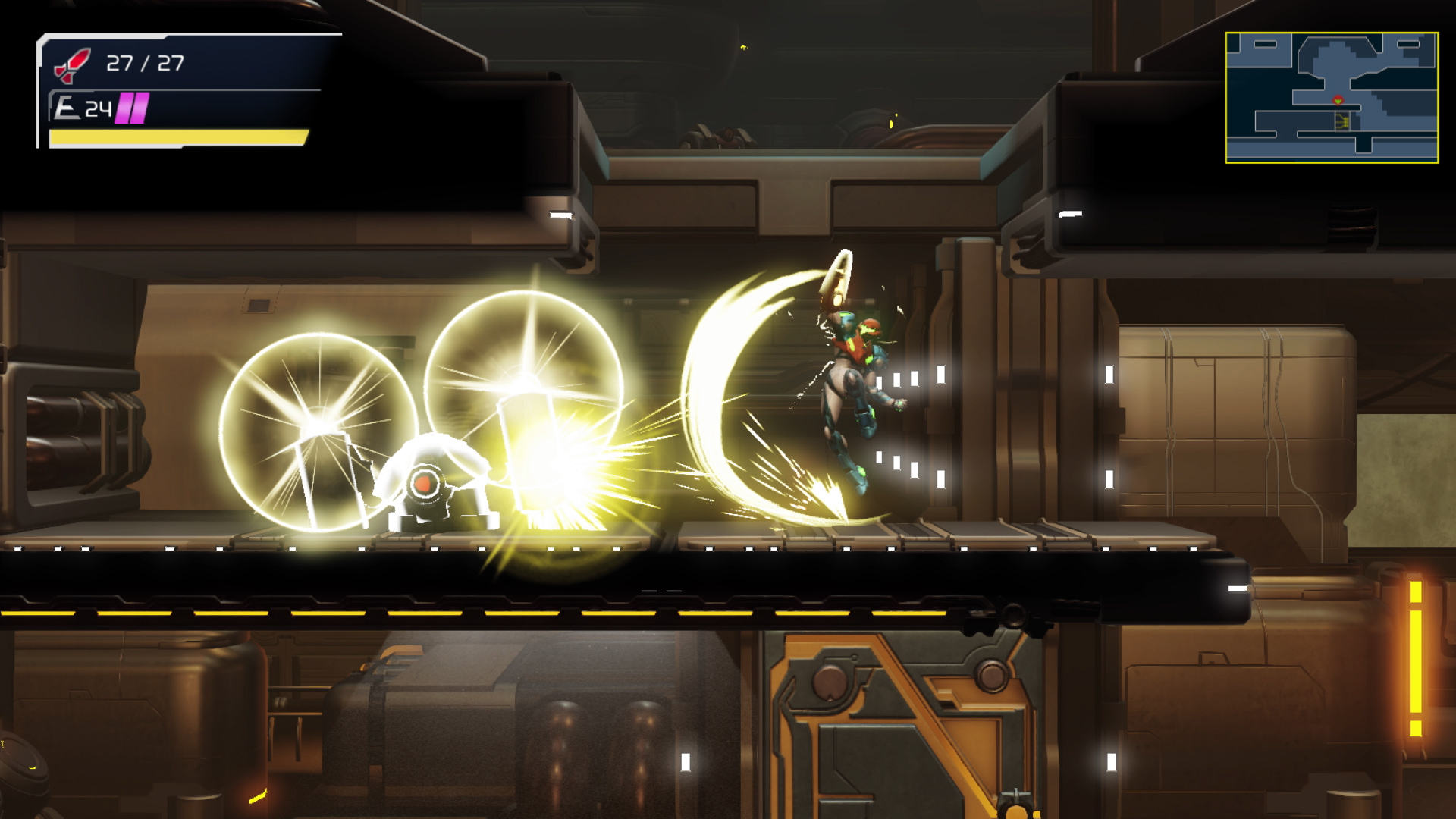 New items like the Phantom Cloak are a great juxtaposition to Samus’ budding arsenal, especially when facing off against the inherent danger of crossing paths with the E.M.M.I.  In other scenarios, certain doors lock you, so you’ll need to bypass this by cloaking and moving forward. When trying to move throughout the vast and expansive complex, I’d find the screen started turning yellow, indicating the robot sensed a disturbance. Without too many options, you either press forward or wait it out to see how big of territory each robot has marked out. Within these areas, you have very little time to think of what route will keep you alive, and may sometimes lead you astray, leading to a death or two. Pairing these robots with what I think is some smartly implemented AI that will cut you off when trying to duck out of sight or into the next room. 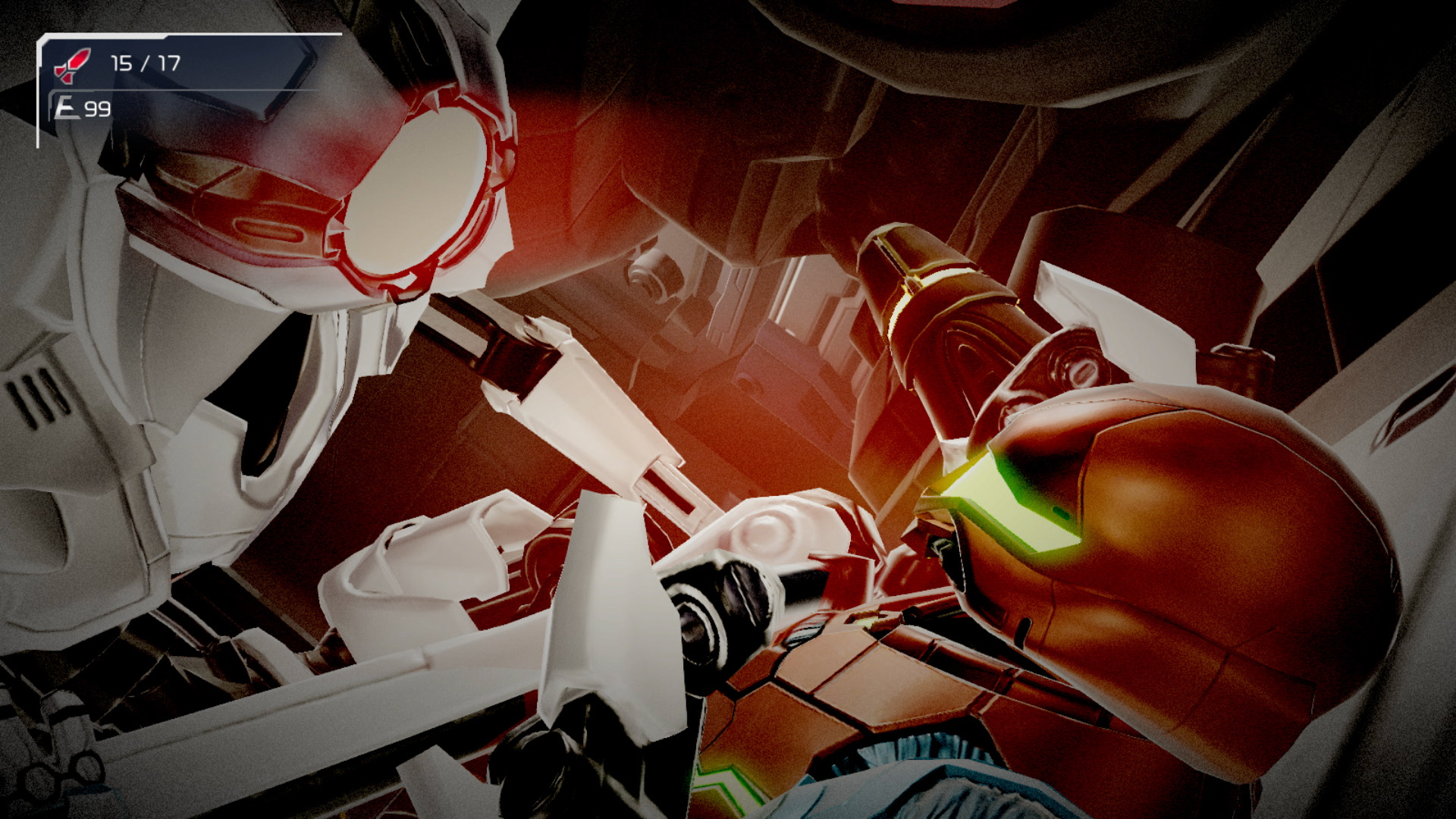 Samus is agile and handles herself well, being nimble can only go so far here though. Furthermore, abilities like the Flash Shift make traversal even more engaging by allowing Samus to instantaneously close the distance and being able to quickly traverse areas. With the inclusion of Aeion Abilities, these active skills are crucial if you want to get to the planet’s surface and will go a long way against enemies and bosses. 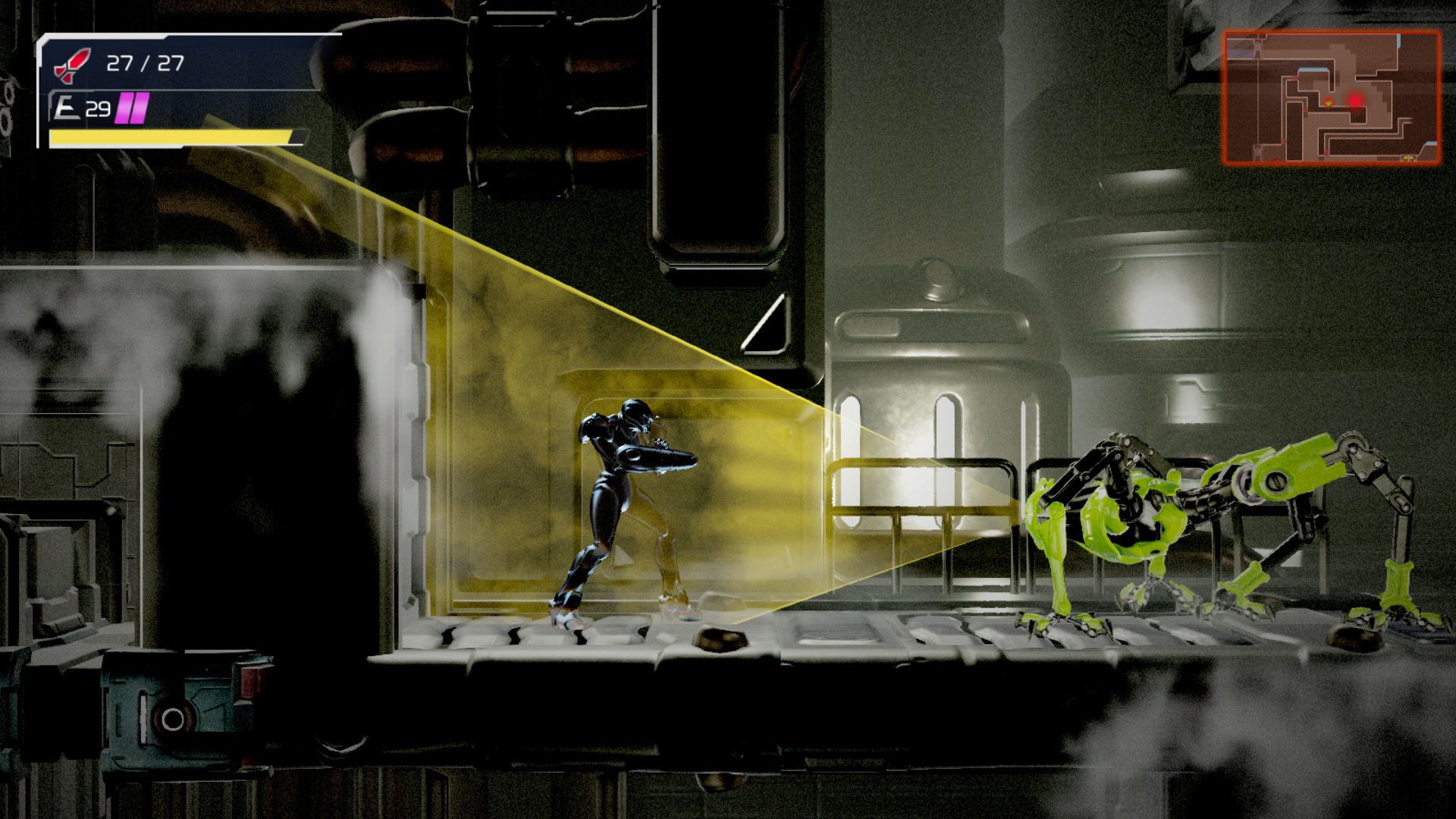 The new addition of having E.M.M.I bots hunting you when you make a peep is reminiscent of Mr. X from Resident Evil 2, the nigh-indestructible opponent that hunts you throughout the game. In Dread, jumping or shooting at the wrong time will lead to being spotted, often turning the tide and Samus having to turn heel and run. If E.M.M.I catch you, is considered a game over so the best course of action is to run and hide. In most cases, you can use the cloaking ability to survive but it’s not available from the start. Thankfully, they only patrol a fixed section of the map so you don’t always have to be on edge. 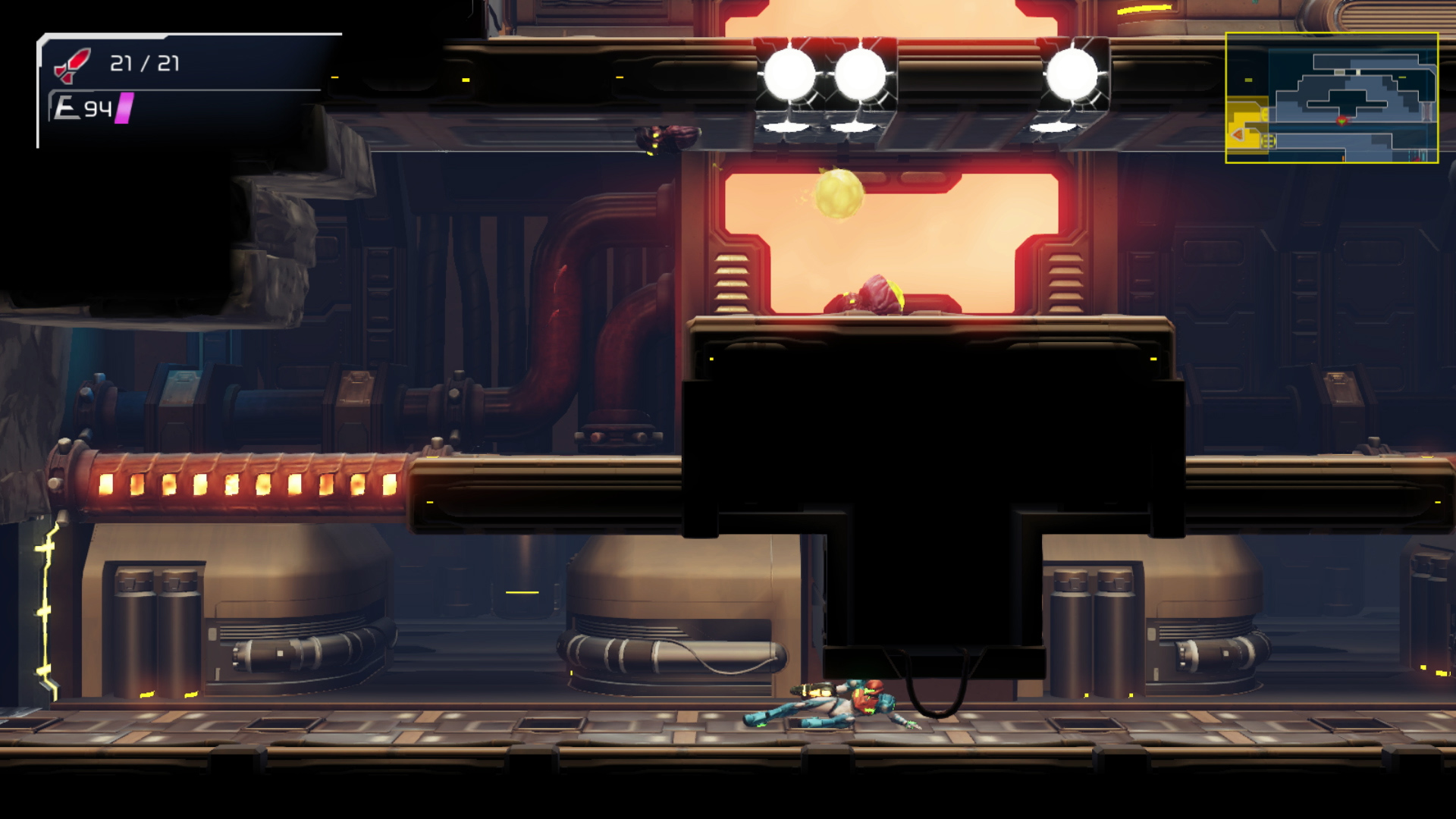 Within the first hour or so, you’re told that essentially you have zero chance of surviving an encounter with these formidable opponents. Each E.M.M.I patrol a section on ZDR and each robot is sensitive to sound and movement. To get through a section when going up against these unstoppable machines, your choices are usually to either run or to hide from them. It isn’t until much later you unlock weapons capable of standing against the research robots.

Samus has some new tricks this time, however, and she’s gained agility and even a new slide maneuver that helps her in tight spaces. Throughout the game, the E.M.M.I will chase you and you have split-second decisions to make to survive. The slide is so smartly implemented into her existing move set that it comes across feeling natural like it’s always been there. However, the tradeoff is you don’t unlock the iconic morph ball power-up until later and it is frustrating given how early into Dread vents and pathways made specifically for said power-up being dangled in front of you. 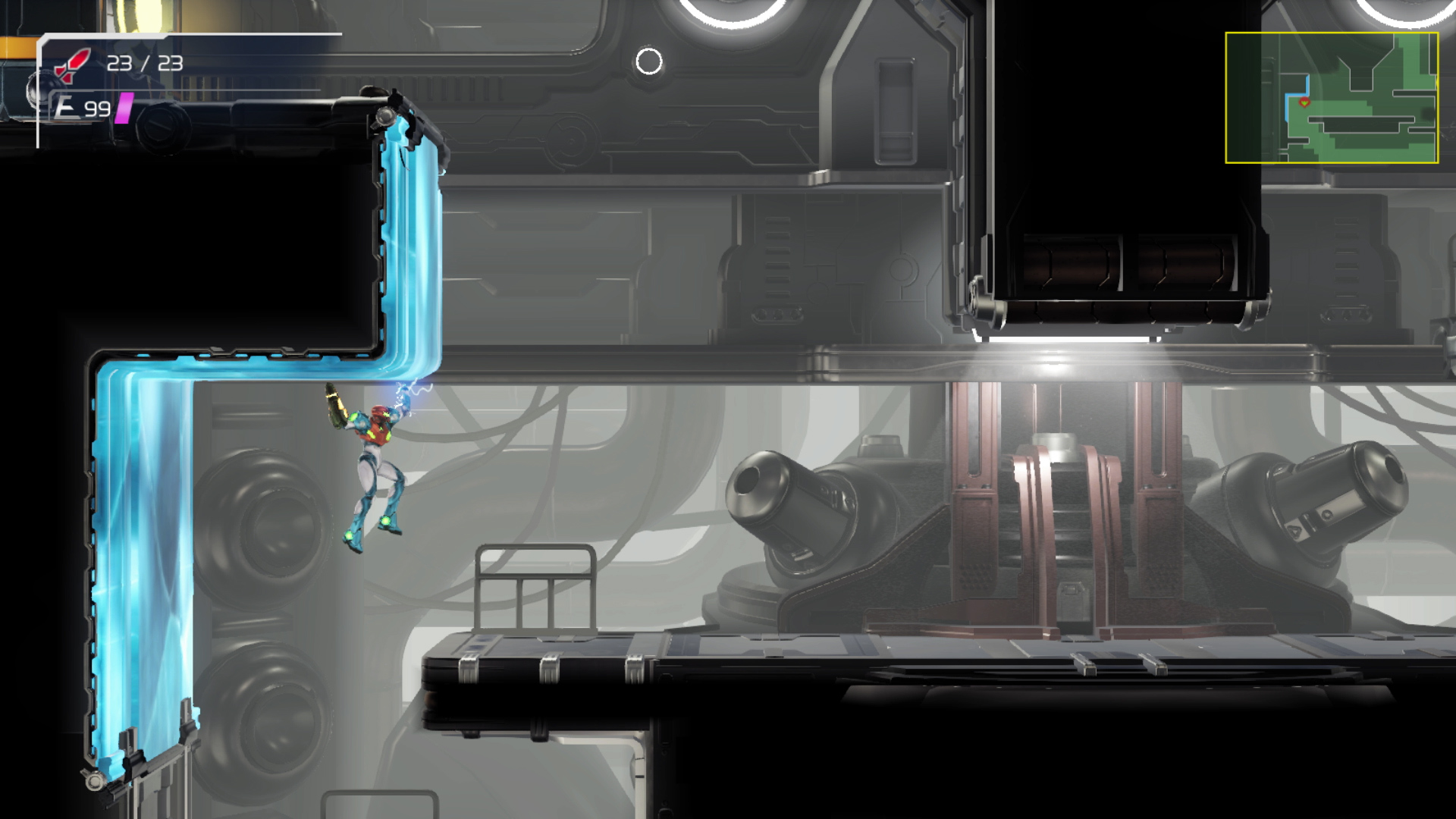 Exploration has always been a critical component of the series and the tradition continues as you make your way to the surface and out of the bowels of ZDR. Granted the opening hours are far different than closing hours given you have few tools to navigate through tunnels and buildings, but Metroid Dread doles out your arsenal and a mix of new weapons at a steady pace, but it’s still a bit of a nuisance knowing there are secrets in a room but you lack the right tool to get to it. 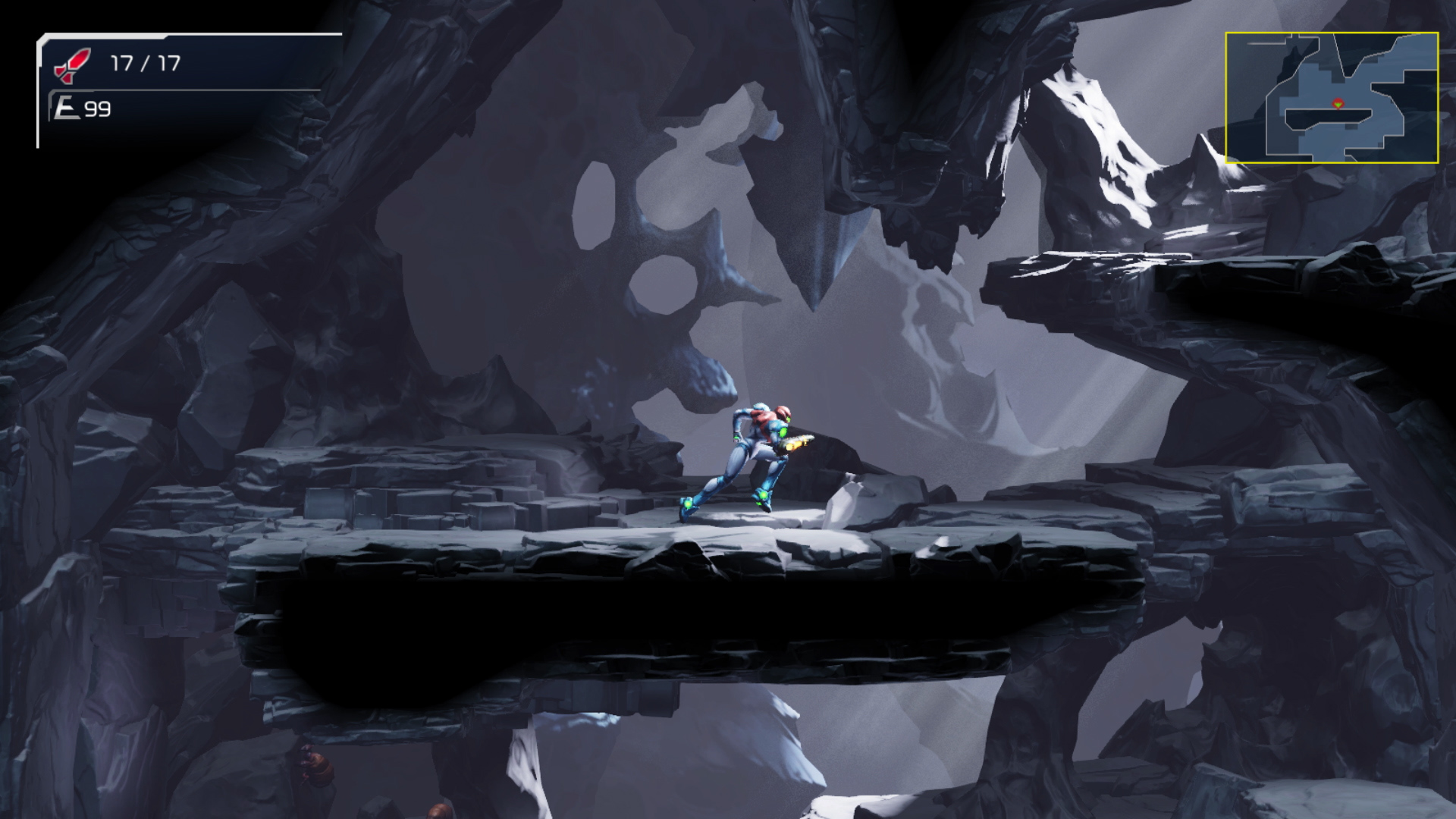 If it hasn’t already been said, Metroid Dread was made for the new OLED model Switch. I can’t stress enough how beautiful the game is, especially not on the new screen. The colours are vibrant and have this wonderful pop to them, the blacks are superb, and you get this sense of darkness when in a pitch-black room with only Samus illuminating the area. After spending a week with the OLED model, I find it hard to go back to the standard Switch for any video game. Metroid Dread is such a showstopper for the hardware and it is hard to translate how adequate the OLED screen is without being able to show you. 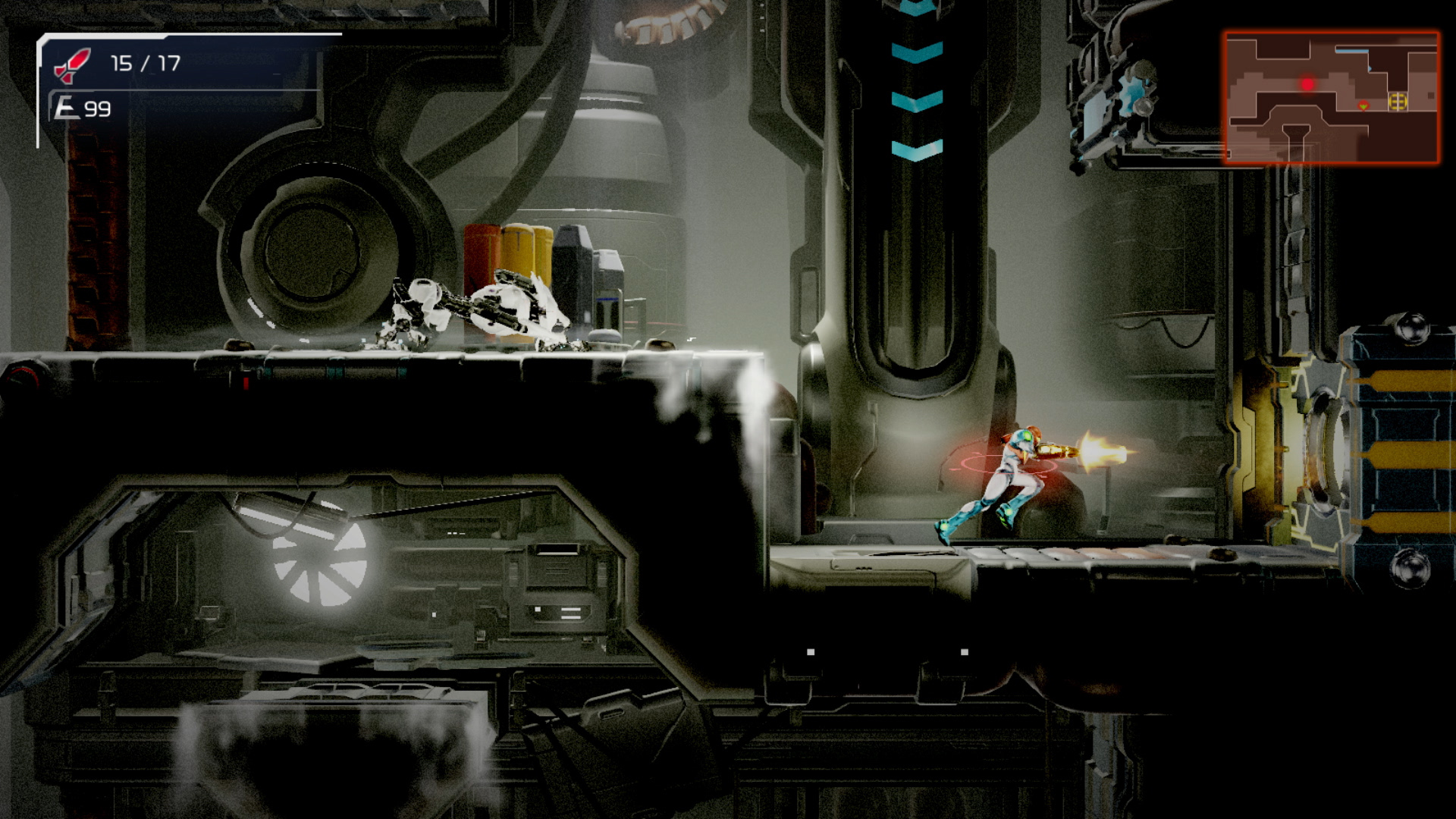 Metroid Dread is hauntingly beautiful and dreadfully terrifying, giving us one of the best experiences on the Nintendo Switch. Bolstered by the gorgeous new OLED model, planet ZDR is a dreary place that will make your skin crawl at times. Fans of the older games, particularly Super Metroid will resonate with Dread. It only took two decades but the conclusion of the Metroid saga is satisfying, delivering one of the best experiences yet. There’s a reason we’ve classified an entire genre of games as Metroidvania – the queen cannot be toppled, and Metroid Dread is a shining example of how the original is always better.