In my household, Mario Strikers has been a staple since its inception on GameCube. One reason is that it is easily the best Mario sports series out of the bunch thanks to the thrills of soccer. I’ve been watching soccer since I was a kid, I played in a junior league, and am an adamant fan of Real Madrid, Juventus, and Toronto FC. Then Mario Strikers Charged launched on the Wii and I spent more time with my friends playing night after night. Then Nintendo decided to shelve the series for nearly two decades. Thankfully, the series returns with Next Level Games at the helm.

Mario Strikers: Battle League was announced earlier this year and much to my surprise would launch just in time to kick off the summer season. It’s been a long time for fans of the Strikers spin-off and I’m eager to see reactions when the game launches. So, how does Mario Strikers: Battle League compare to previous entries? Well, pretty close in a lot of regards. While the roster hasn’t been bumped up, the game has new mechanics that’ll fit right at home with the familiar gameplay Strikers offers.

The returning roster consists of 10 characters with plenty of fan favourites to choose from. If you’re thinking the roster being on a smaller side is an issue — this has been something the series has always had and in the grand scheme of things doesn’t impede the gameplay. Each character comes with their own Hyper Strikes — powerful moves teeming with your selected character’s personality. Each character also has their own unique stats directly feeding into said character’s performance like Luigi calling on a tornado, Waluigi being his shady self and smelling roses, and Wario using his behind to send the ball flying, Bowser igniting the ball and drilling it towards the goalie. 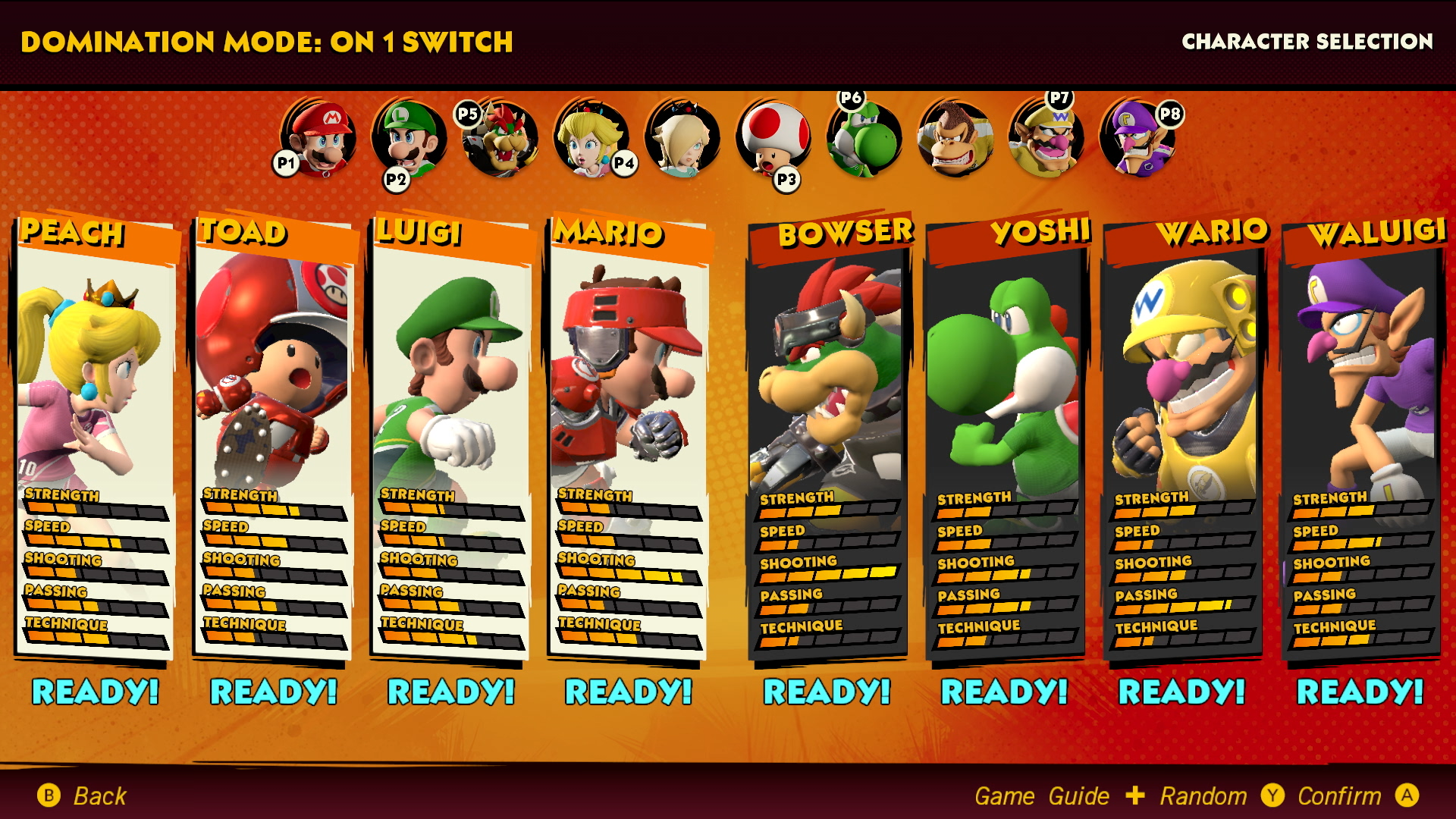 One of the biggest and best things Nintendo’s roster of characters offer is the larger-than-life personalities. Mario, Luigi, Bowser, Peach, Toad, and their counterparts and humour engaging and do their best to bring out smiles. More than once I’d catch myself grinning at the insanity unfolding on the pitch and for good reason — these lovable characters can easily fit into any scenario and the familiarity I have with them make exploring new experiences easier to acclimate to.

If you decide to choose a character that might be lacking strength, then any physical moves may not have the necessary power to complete the action. If you’re Toad wants to tackle, then it’ll work but due to a lack of strength, it won’t actually knock the ball loose. Mario as an example is a finely balanced player so you can expect him to be able to complete the basics without too much stress.

In previous iterations of Mario Strikers, you would select your main star and give them Shy Guys and Koopas as teammates. That isn’t the case any longer as now you can select four characters from the available roster to play alongside you in addition to your goalie. 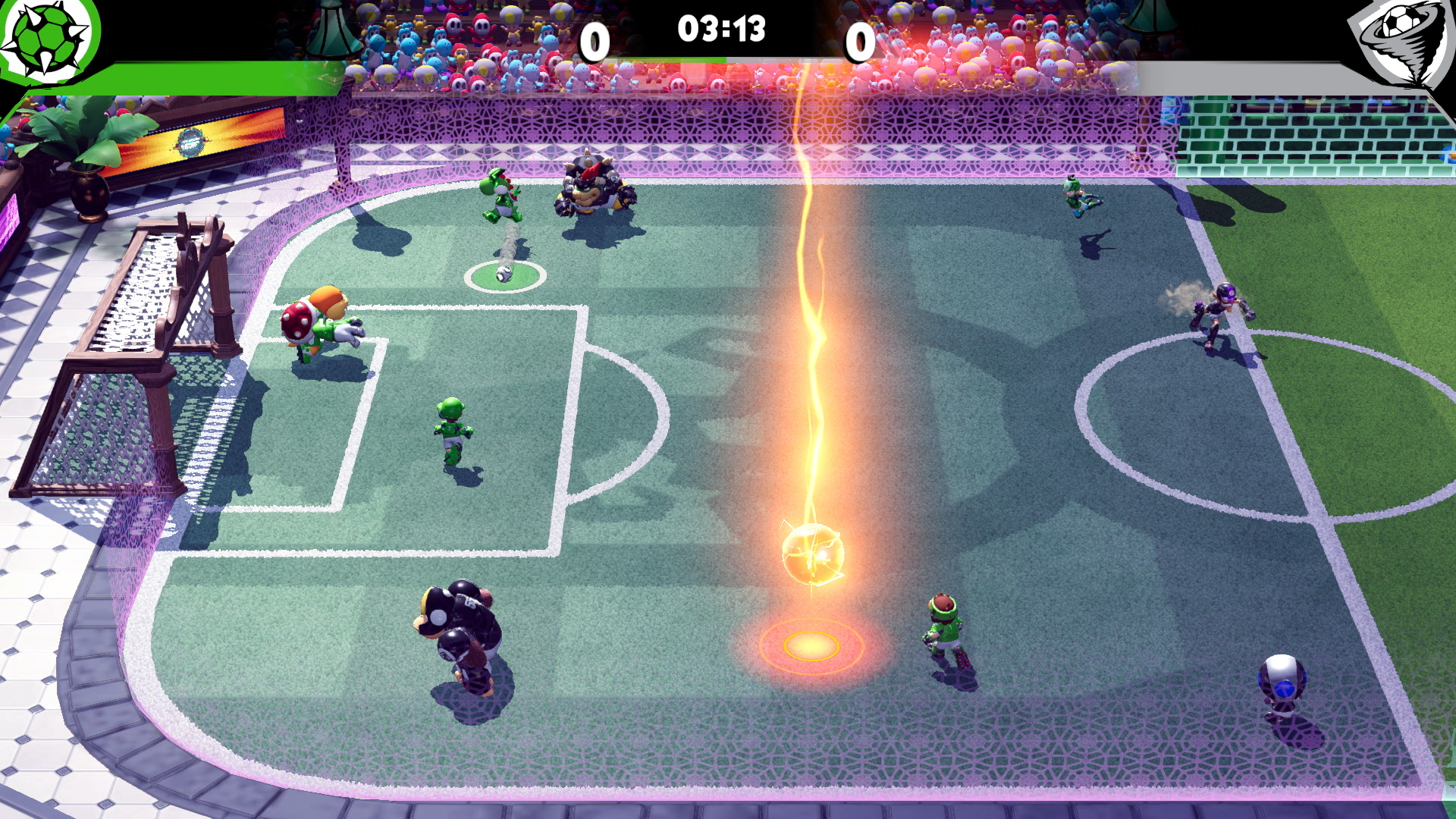 Just like in soccer and in many FIFA titles, there’s the lob pass, the through the pass, and the ground pass available to make your way across the pitch. What makes Mario Strikers: Battle League different is the battle implementation Nintendo has added to diversify the gameplay. Now there are new moves to use in a match including

While many of the soccer elements are familiar to fans of the sport, Mario Strikers: Battle League mixes in competitive battle elements including power-ups and Hyper Strikes. Power-ups are generally doled out at an acceptable pace, generally landing on the pitch for the team down a point or two to help even the odds. Then you have Strike Orbs appearing sporadically for first dibs. 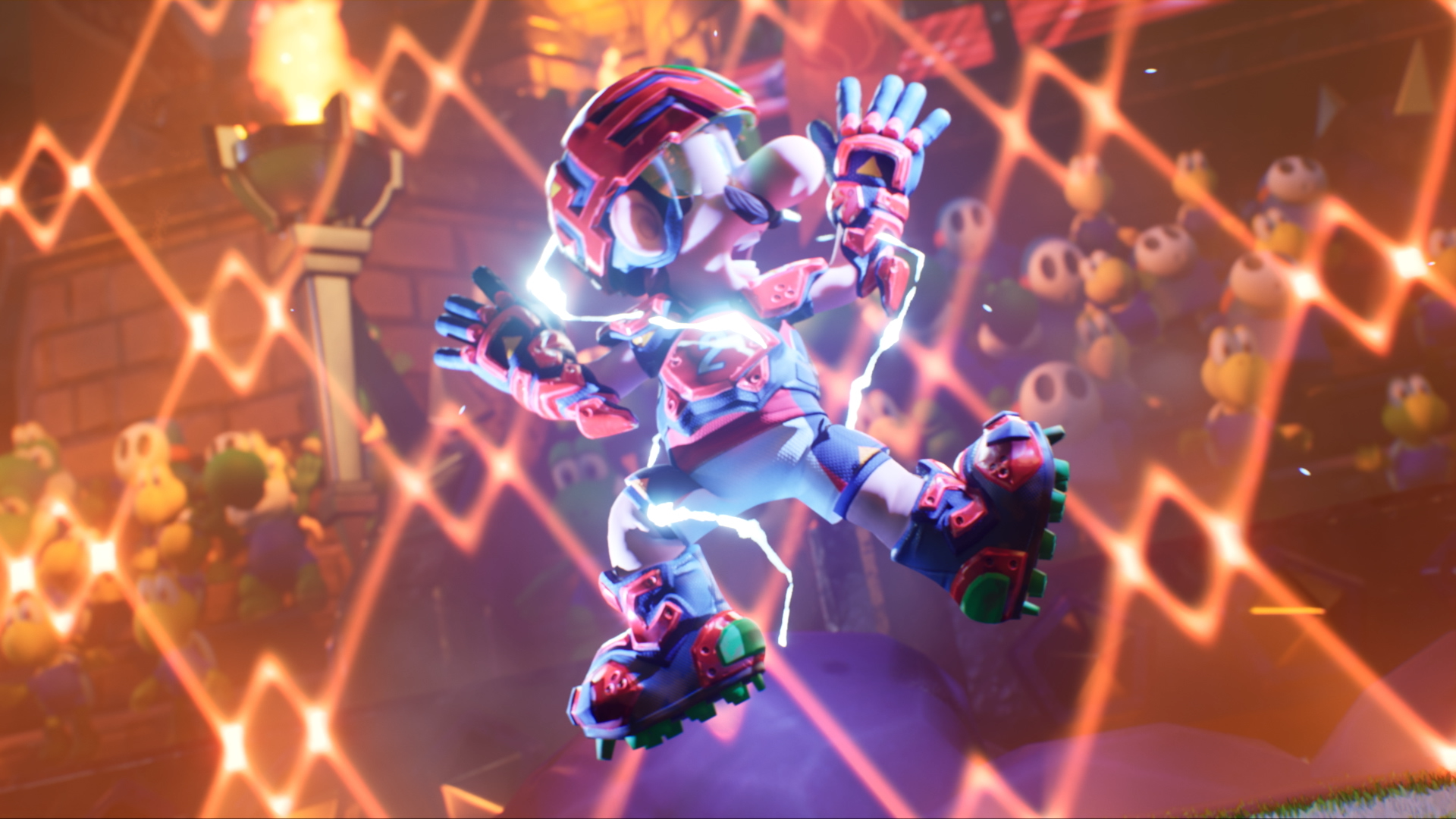 If you successfully pick up the Strike Orb, you have generally 15-20 seconds to grab the ball and make your way to the other side of the pitch to initiate the Hyper Strike. If you succeed by tapping the button within the blue sections of the Hyper Meter, you’ll instantly score two points for your team. If you miss and tap outside of the blue meter then it lessens to a 50 percent chance with the option to grab the ball from a dazed goalie for one point. 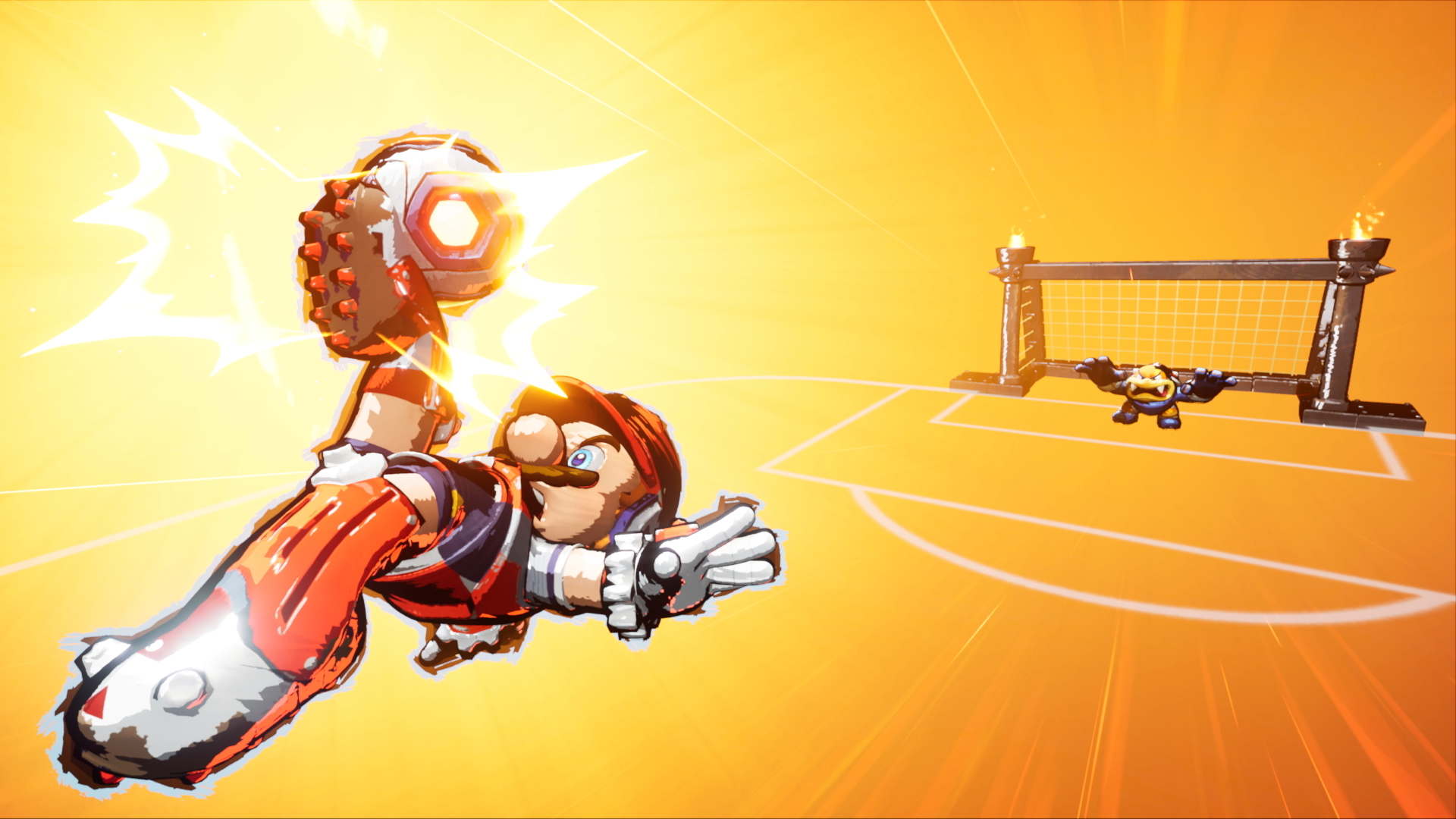 There are several modes you’ll want to check out but one I found myself returning to is the Cup battles. These include challenges and are often a ton of fun to compete in a series of tournaments where you’ll need against several gear types to win. If you’d like to jump in and simply play, Quick Battles are your best bet for a pickup and play session. These are available for up to eight players and can be played online or locally. I found this to be pretty basic but understandably so — Quick Battle is meant to play a few matches without the stress of progression. You pick your character and their colours; pick the side you want to be on and head into a match. 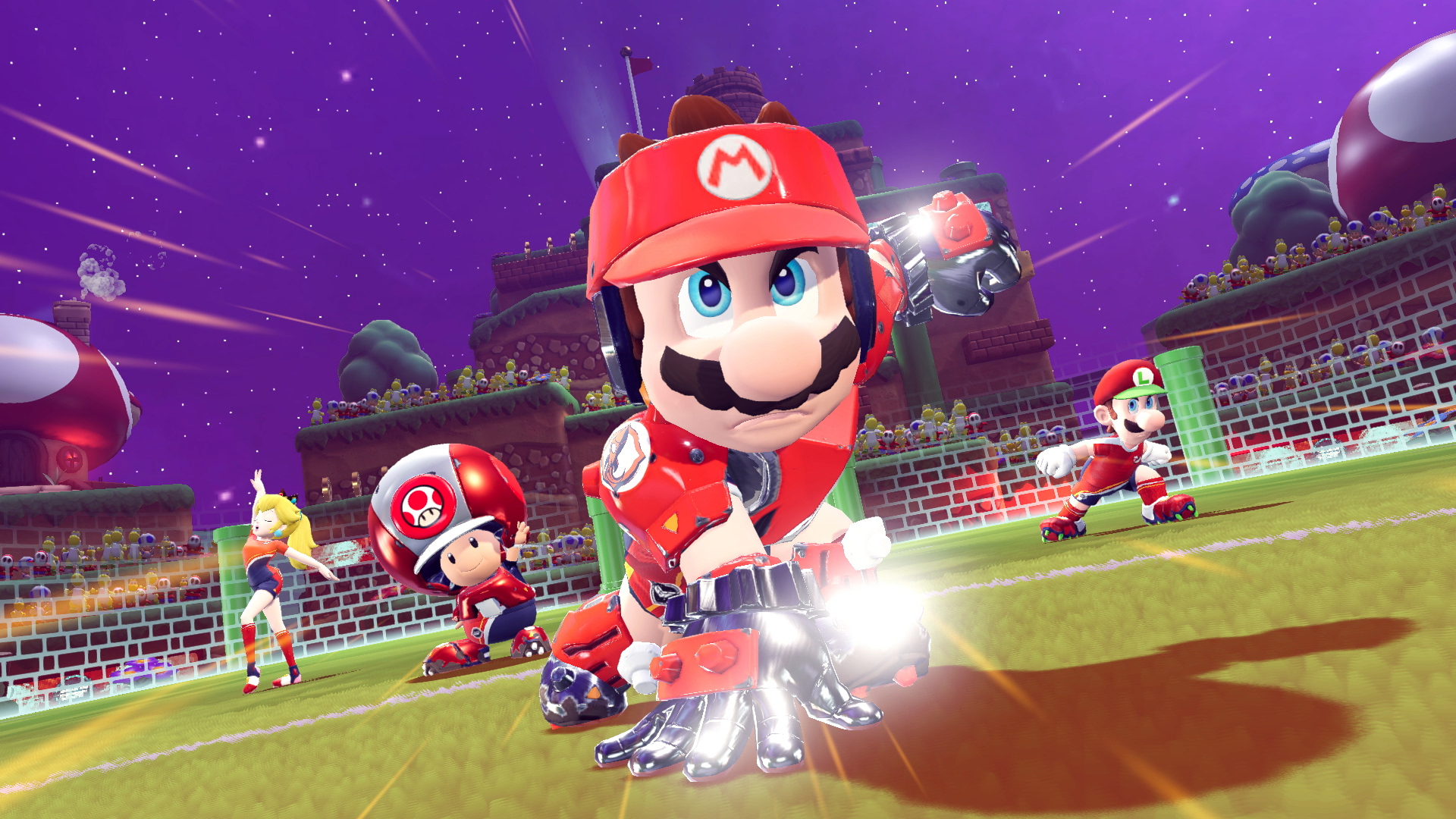 Cup Battles generally offer the best return ratio on coins with each cup offering 400 or more coins per bracket win. You play a round of four matches with the winner moving on to the next match against the winner of the other matches in each cup bracket.

Impressively, the opponent AI is solid at normal difficulty and took me down a few pegs during my few run of the gauntlet of cups. Dialling the difficulty back to easy to get a sense of the controls and mechanics is highly suggested before turning the difficulty up to normal or hard.

I learned to appreciate the opponents a lot more by following this method and genuinely feel a lot more confident with my abilities following a gradual increase. In total, there are six cups to be completed (with each Cup bracket offering 400 coins per win the first time) and each one focusing on a certain category — like the Turbo Cup pitting you against opponents that use Turbo Gear, or the Muscle Cup pitting you against opponents that use Muscle Gear. Generally, the further down the list you go, the better equipped you’ll want to be so be sure to pick the right Gear. 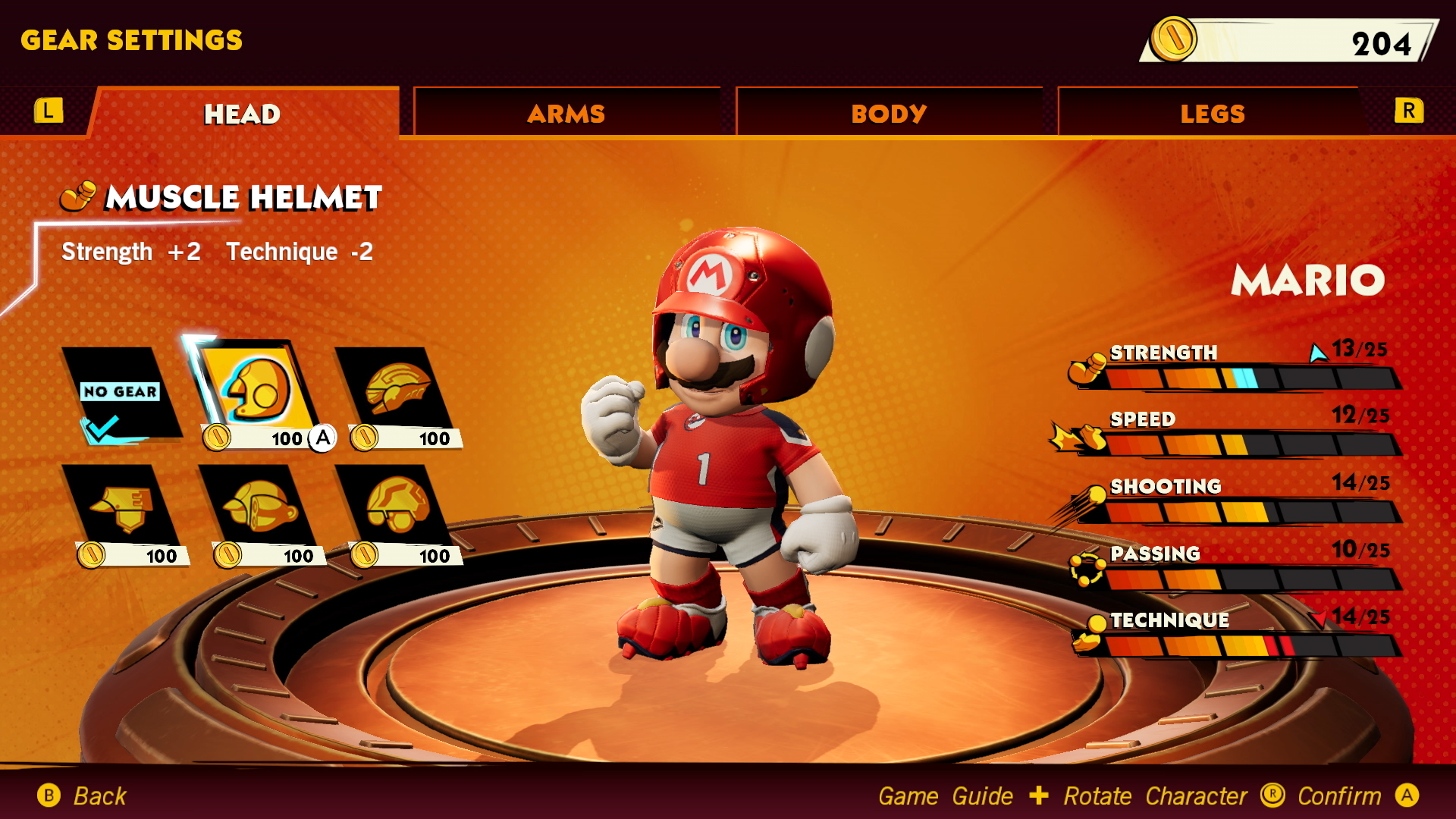 One of the biggest modes you’ll encounter is Strikers Club. This is an online-only mode and one where you can join online clubs to play with other people from across the world. Each club can house 20 players and up to four players from a club can head into a match online in hopes of winning gold coins and gear. Depending on your club’s performance, you’ll either move to the next season based on the number of points your club earns. These club points are a way of knowing how well your club has done and if you don’t have enough to move into a new season then your team is demoted. In total there are seven leagues you and your club can play in and work your way up to the top.

Mario Strikers: Battle League has tons of customization options. There are several categories you can make your own including your team jersey’s pattern and colour. After every game, you are awarded coins. These coins are used to purchase new gear, allowing you to customize your character’s appearance in five categories: muscle, turbo, trick, chain, and cannon sets. 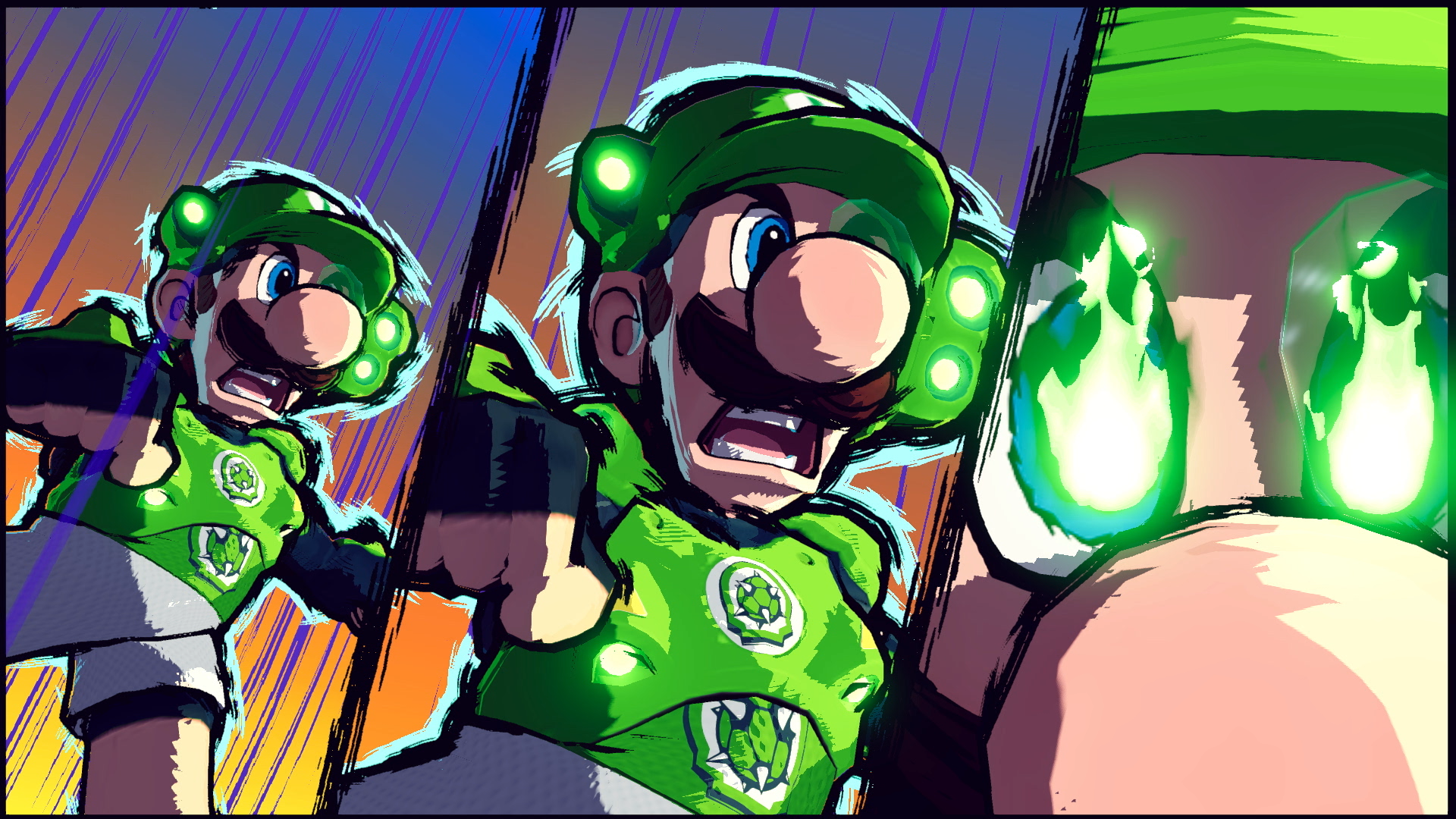 The good thing is you’re stuck having to wear one set at a time and the option to freely mix and match gear is there to maximize your character’s potential. Gear is not tied to any one mode and can be used across each mode without worry.

Without online being available during the review period, I was relegated to trying out the First Kick demo and seeing how it handles during the stress test period. I was able to find an ally rather quickly and alongside them, we worked together in a 2v2 match to victory. 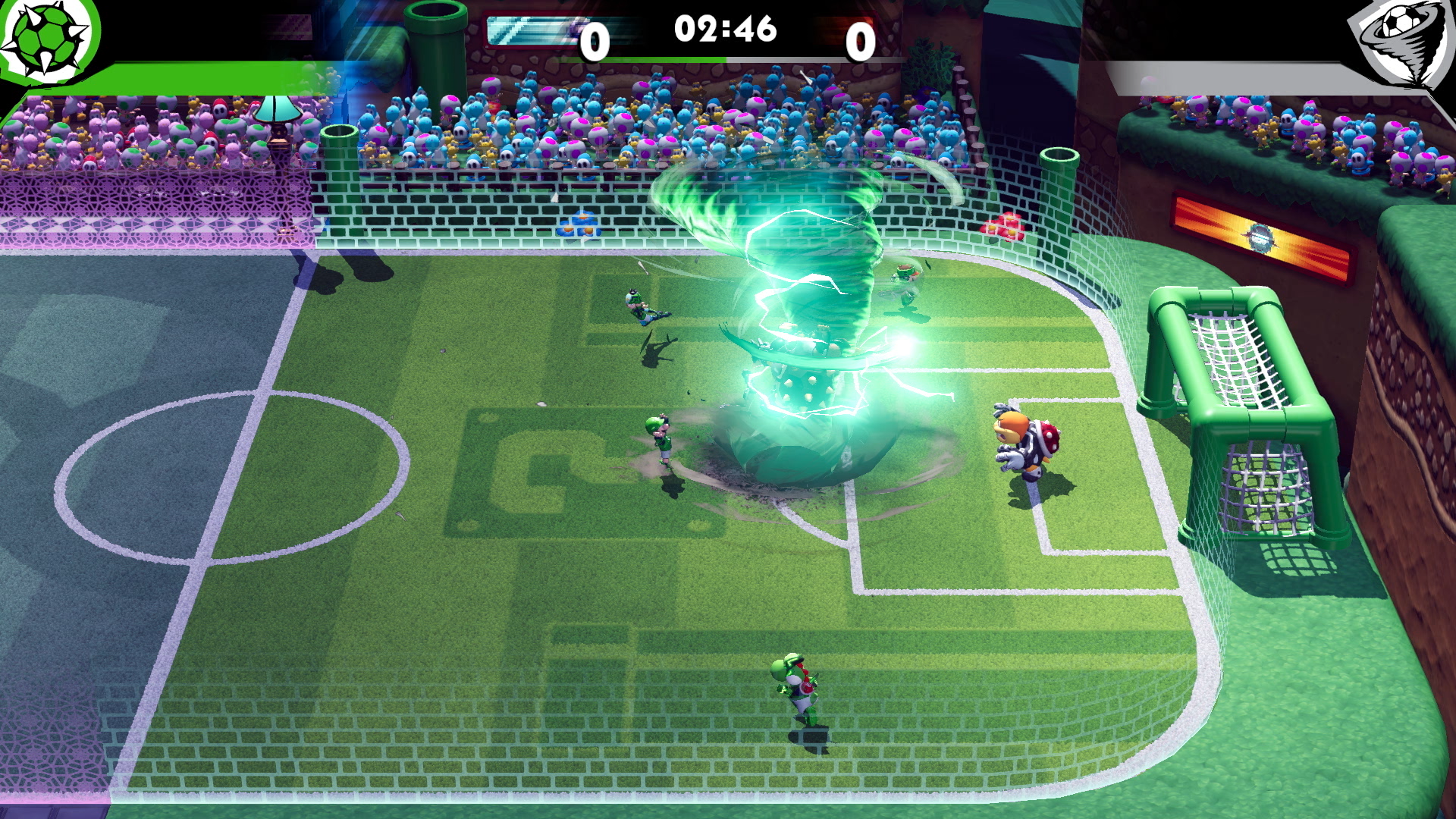 Matchmaking works surprisingly well during the First Kick demo sessions. If you are matched with a teammate, you’ll both control the team. If your teammate ends up being disconnected, the match will continue with you captaining the entire team against the two other players.

I’ll revisit the online modes once the full game goes live but my general impressions of the dozen matches I played during the weekend sessions were without issue.

Mario Strikers: Battle League has the makings of a great game and I’ve enjoyed every moment of playing it so far. With that in mind, it does feel a bit bare-bones and the post-launch support will be critical to the success of Battle League. It’s still a lot of fun to play alone, with a friend, and even with a stranger but the lack of any story content is noticeable.