Mario + Rabbids: Sparks of Hope signs the return of the wacky team-up from Nintendo and Ubisoft.

What could be better than combining two totally different universes in a game where anything can happen? This is the feat that Ubisoft has once again accomplished with the XCOM-Like real-time strategy game: Mario + Rabbids: Sparks of Hope. After a critically acclaimed debut game, studios in Milan and Paris bring back Mario, Luigi, Princess Peach, the Rabbids gang, and several new fighters in an all-new adventure.

The game is a sequel to Mario + Rabbids: Kingdom Battle, a cross between Nintendo’s Super Mario universe and Ubisoft’s Rabbids. Cursa has spread darkness across the universe and seeks the energy of Sparks, creatures generated by the fusion of Lumas and Rabbids, throwing the galaxy into turmoil.

Mario and his companions will therefore have to travel to many worlds in order to restore peace in the galaxy, save the Sparks and destroy the darkness, Cursa, and his henchmen.

Sparks of Hope is very reminiscent of the gameplay of its predecessor, Kingdom Battle. The level designs on the other hand are much less linear than in the first game and I love that! You have various worlds that you can navigate in order to collect items, chests, special parts, and, of course, Sparks. All with multiple creatures to fight here and there that will take you into “combat” mode on a third-party map in contact and where you can choose your level of difficulty.

Players must choose from nine characters who will enter the fray, with each character having their own type of weapon, special abilities, and skill management. For example, Mario can pound the ground to smash enemies while in mid-air, while Luigi can double-jump to cover a greater distance. In addition, new characters have been added to the team compared to the first opus, we are talking here about Edge, Rabbid Rosalina as well as Bowser. Another novelty to consider: Mario can be replaced in combat, which allows you to form teams of your choice, whether with or without our plumber dressed in red and blue. 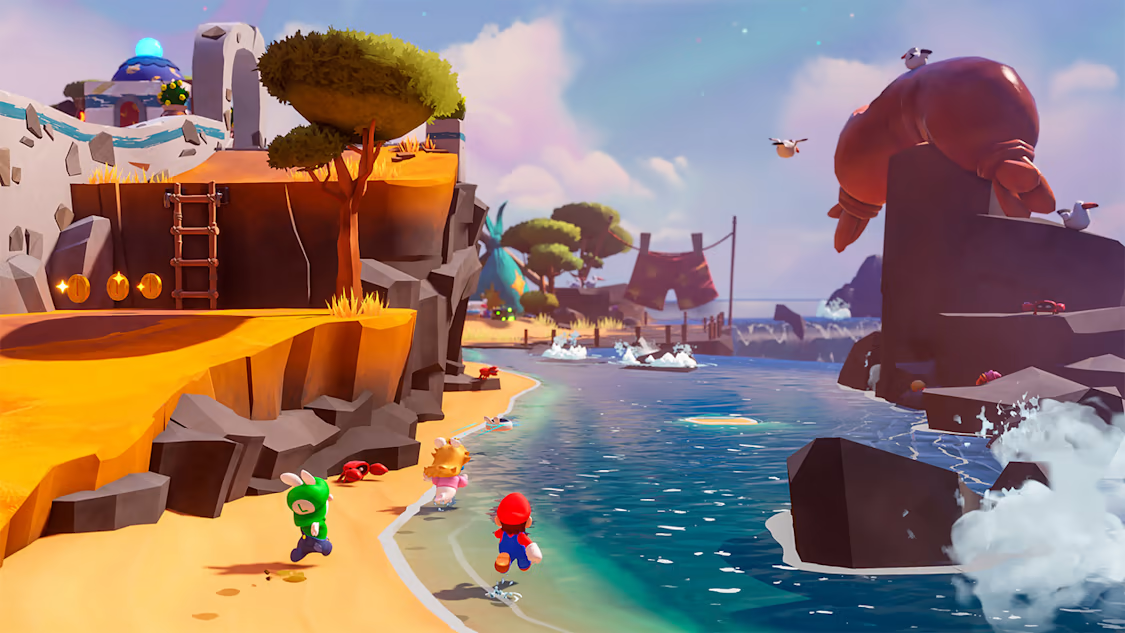 Where there is also a “touch of new” at the level of the addition of Sparks in combat, thus modifying the strategies to be adopted to try to defeat your opponents. Each Spark has unique abilities like being able to add elements to your attacks, be it fire, water, electricity, acid, or otherwise. In addition, some Sparks have abilities to boost your statistics including your strike power, special strike or even your ability to reduce physical or elemental damage received.

Your faithful Beep-O, the robot that follows you, can help you before each combat phase by telling you where the enemies are and what their weaknesses and resistances are.

Not to mention that tactical turn-based combat uses a new system that disregards the grid-based layout of the first game. In fact, I’d tend to compare Sparks of Hope‘s combat system a bit more to games like Divinity: Original Sin.

As long as you have not performed an attack action with your weapon, you will be able to move as you see fit within the area that is allowed to you. You can alternate with each member of your team until you are happy with your moves, techniques used, and attacks. Once each possible action has been completed, it will be your opponent’s turn. 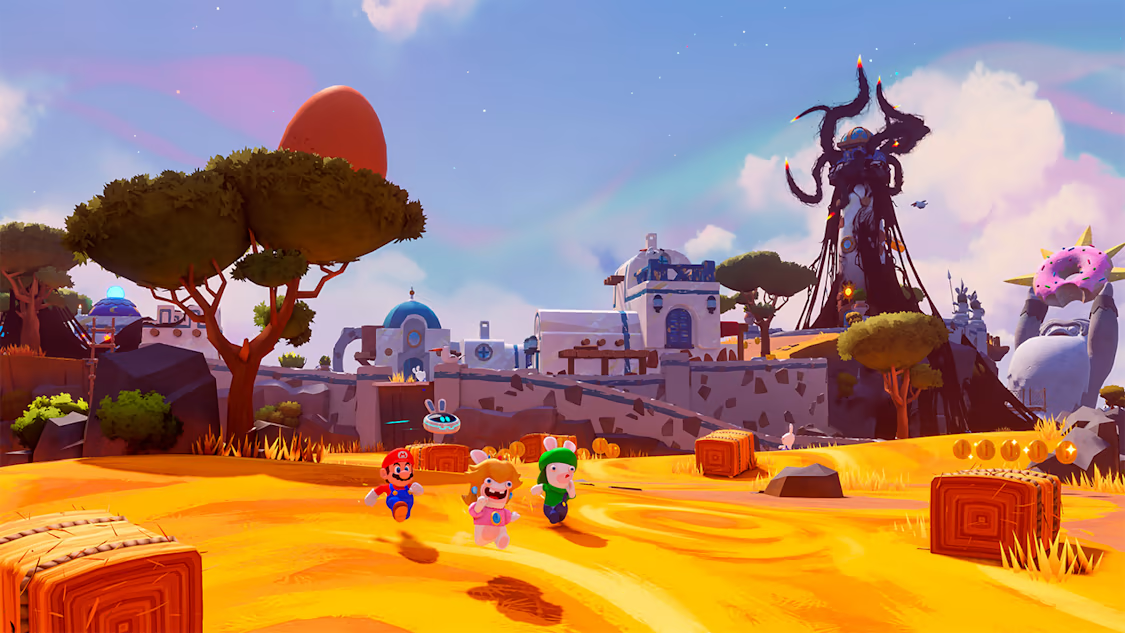 During your movements, you will have the possibility of charging your enemies. Some will fall to the ground, such as the Bob-omb or the Goomba with a pan on their head, and you will be able to take them in your hands to throw them. The Bob-ombs will explode and damage the scenery and opposing or allied characters in the area, allowing you to inflict additional damage before using your personal weapons. Bob-ombs will explode seconds after being knocked down. Make sure you have enough time in front of you to throw them before they explode in your face. This, therefore, adds a real-time component to the style of the game.

Thanks to the multiple Sparks that you will collect, as well as the characters of your team, you will also be able to understand how to use each character as well as each Spark according to the enemies to face, allowing better control of the action zone and even making superb combinations such as attracting enemies to oneself with the Spark named Glitter and use the Spark Reflector so that enemy attacks are reflected and they are the ones who take the damage. 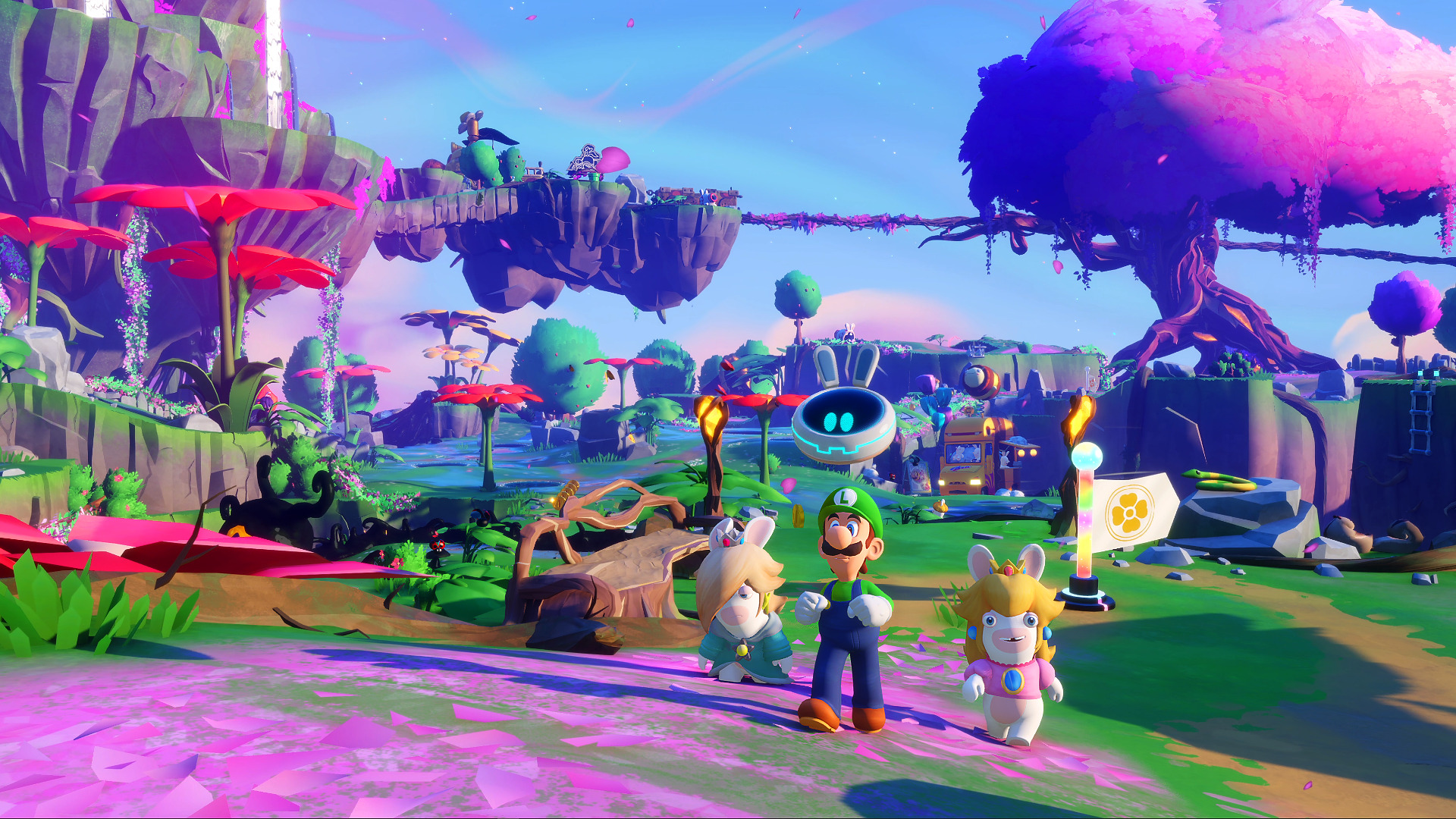 Any hero can use any Spark, giving players the freedom to freely mix and match these to make every fight feel unique.

As mentioned earlier, each hero has a weapon as well as a unique skill suited to their style of play. On the weapons side, Rabbid Mario fights melee with powerful gloves, Mario uses two guns, Peach attacks with an umbrella reminiscent of a blunderbuss in height, which can more easily hit enemies hidden behind small walls, and Bowser can launch explosive projectiles.

Skill-wise, Peach has a shield that absorbs all damage done by two strikes for one turn, Rabbid Mario counterattacks, Mario attacks anyone who moves in front of him, and Rabbid Rosalina puts all opponents to sleep. 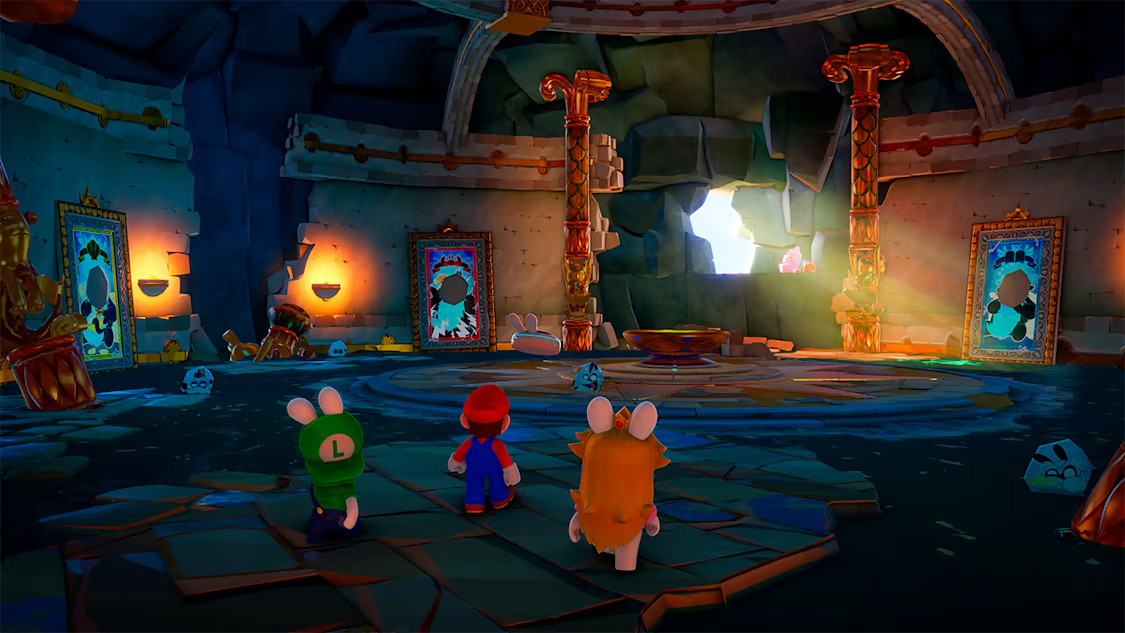 Using consumable items is also available, taking an action point from the character as well. Each character has, moreover, two action points which exclude movements, jumps and charges.

You can almost always choose your favorite team but, at times, the game will impose a specific team on you. That said, unlike the very first title, you have so much leeway in your choice of teammates and Sparks that you’ll have fun trying out as many combinations as possible.

Sparks of Hope, with this wide latitude, is a little more reminiscent of a JRPG than its predecessor. Explorable levels, the ability to backtrack to discover new things with abilities you didn’t have to begin with, random encounters, and Sparks working much like Djinn in Golden Sun makes it all that much more awesome. 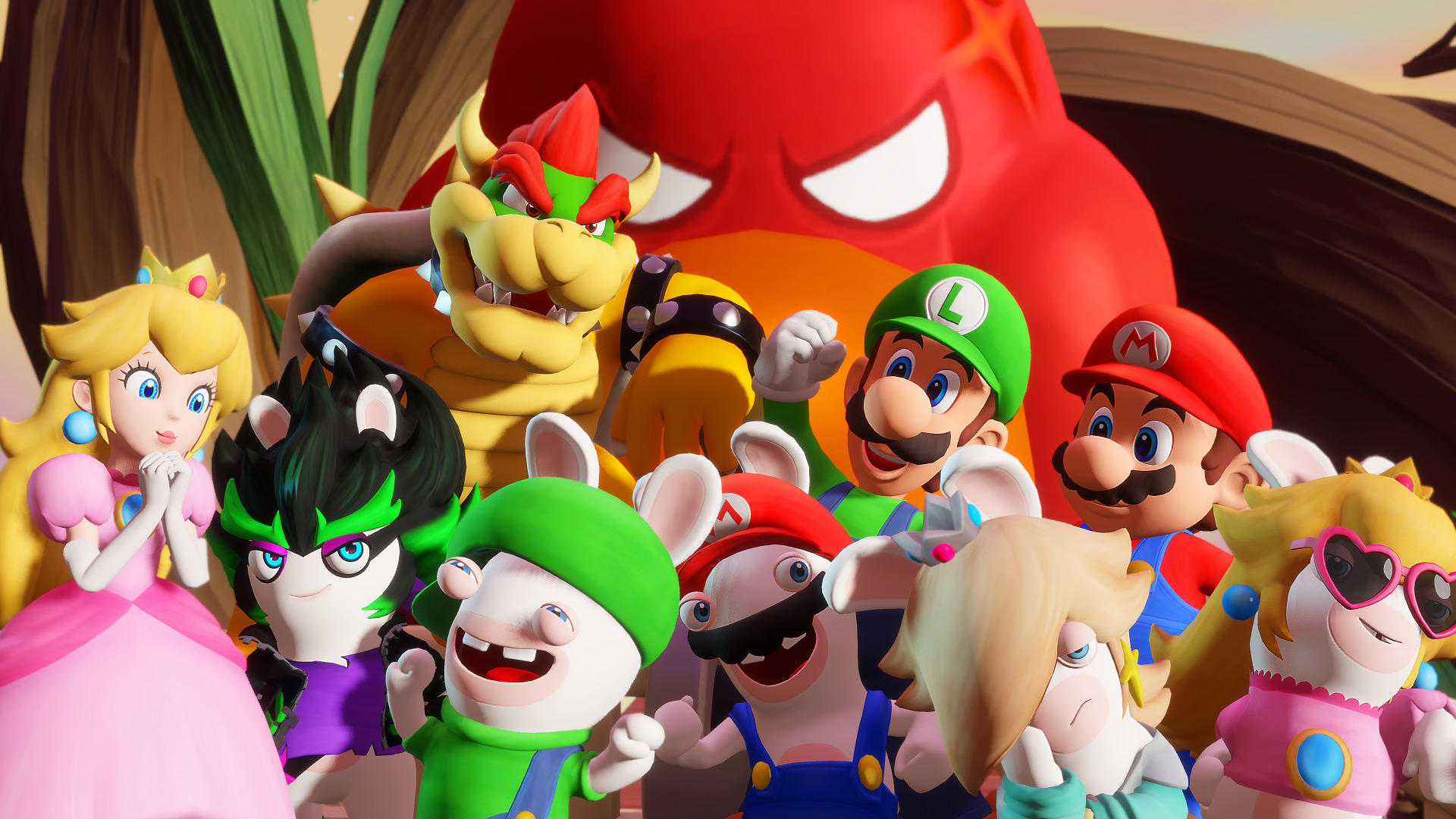 In fact, the only negative part I can find in the gameplay of the game is that the weapons you own cannot be upgraded. You can buy skins, sure, but you can’t buy a new weapon that deals more damage or enlarges the hit zone or whatever. The only upgrades you can get are by completing your skill tree of each hero as well as leveling up your Sparks.

The worlds are fun to explore, the possible combat combinations are great, and the battles are faster. The additional quests are very repetitive, however. It’s mostly about defeating X types of Y enemies in the area to please one of the locals.

A Colourful Journey Through The Mushroom Kingdom

Visually, Sparks of Hope caught my attention because it now has in-combat animations. Unfortunately, these animations are fantastic and only last a few seconds but each character only has one animation that plays whenever a special technique is used. At first, I thought it was visually stunning, but eventually, became a bit of a nuisance as I trekked along. Fortunately, Sparks of Hope allows you to override the animation to quickly return to combat at the press of a button. 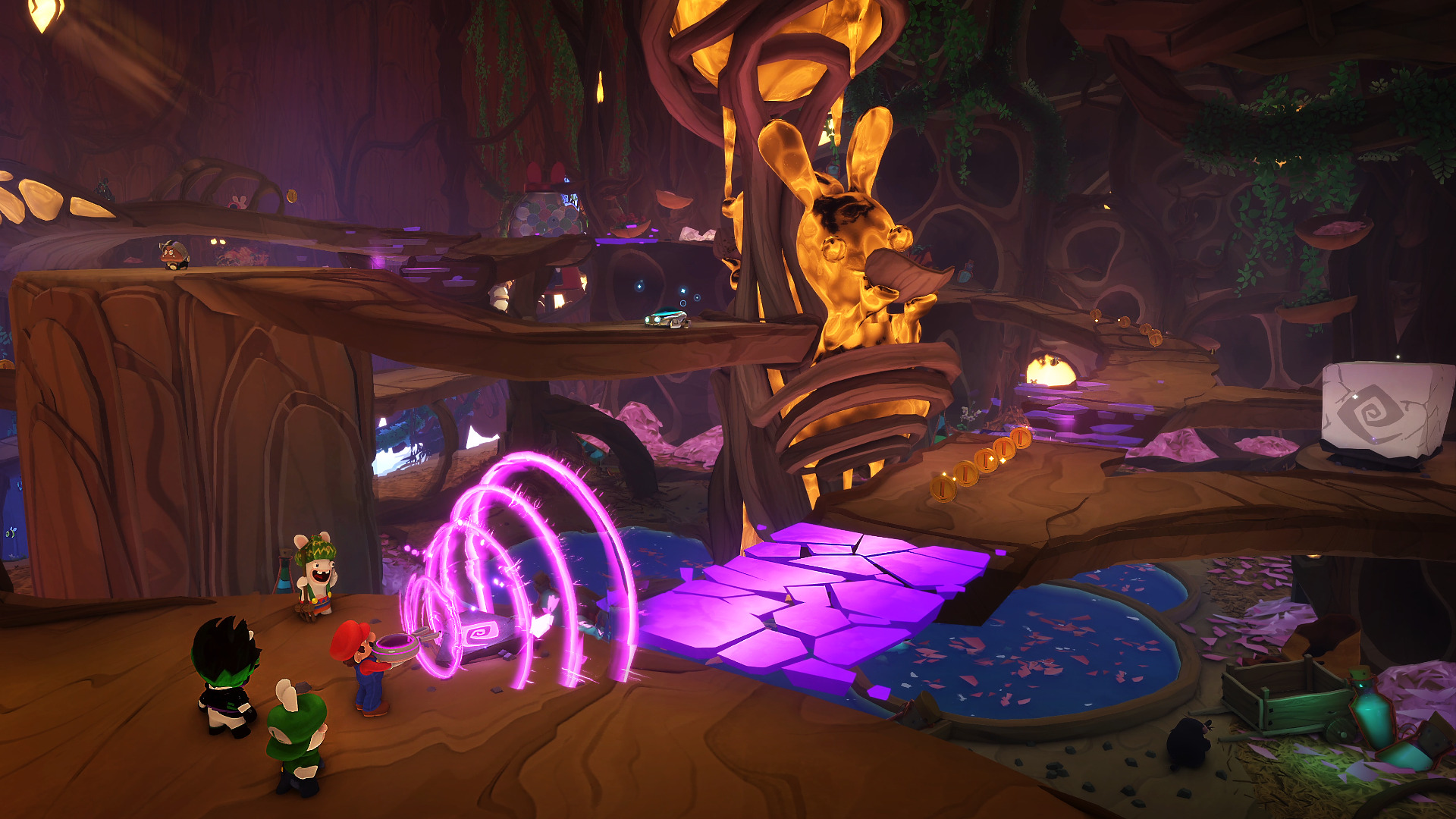 Otherwise, what more can I say than the superb colorful zones as well as the sublime characters that we can meet, some resembling strange creatures looking like Rabbids without actually being one? The creatures, from the worlds of Super Mario and Rabbids, and specific to this game, are superbly made and blend into these areas with ease.

Ubisoft decided to opt for a game with voices and a certain narration of the characters, including NPCs. I think it’s all really great because we have the opportunity to hear everyone’s comments, even from the Is side, avoiding having only the pesky “Bwaaah!” that we know of them. 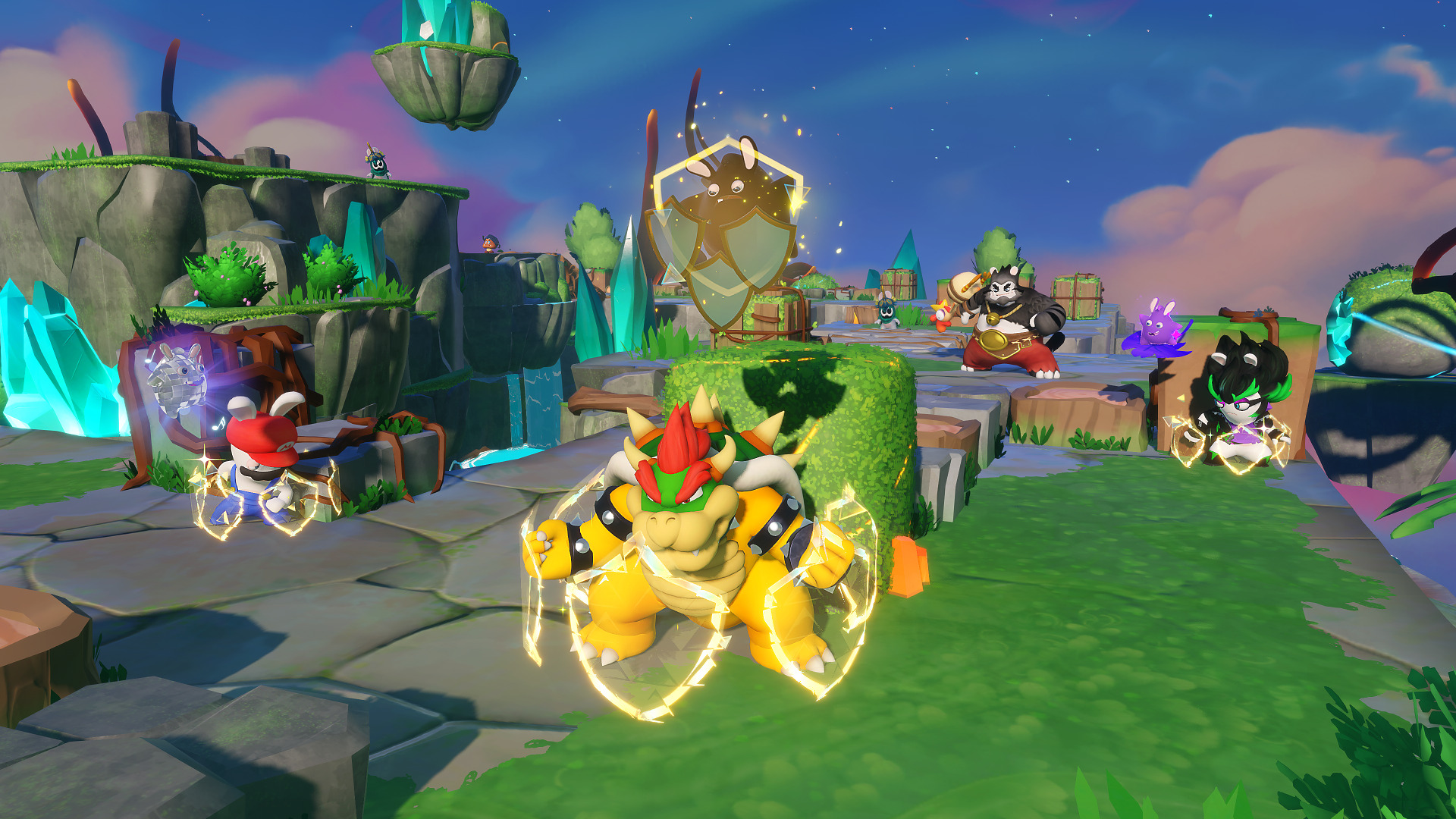 Mario + Rabbids: Sparks of Hope is an excellent game that took the franchise to an even better level than its predecessor. Not ignoring the elements that it brought, Ubisoft instead decided to improve what people liked to make it even more fun to play. Honestly, I didn’t think it would have been possible to do better than the first one and I mostly expected this one to be a simple sequel without much improvement but thankfully Mario + Rabbids: Sparks of Hope plays like a full-fledged sequel.

Honestly, if you’ve never been introduced to turn-based strategy games and would like to learn, then you probably won’t be disappointed with this game that will easily guide you from the start. Its freedom of movement in the different areas and the absence of linearity make it an excellent 3D Mario while the plethora of options that stand before you in terms of managing your teams and your Sparks makes it an excellent RPG that will take around 30 hours to complete and a little over 40 hours if you do all the additional quests.