In Ontario, we’ve only had a few short weeks of golf courses being available to the public. It feels like forever since we’ve been able to leave our homes and enjoy the sunshine. It’s been so long that the last time I was outside was when Mario Golf: Toadstool Tour launched on GameCube. The latest installment in the Mario Golf series, Super Rush is a fine return to the links. Developer Camelot returns, following 2018’s Mario Tennis Aces and delivers a reenergized entry in the Mario Golf series with Mario Golf: Super Rush.

I’m not an avid golfer and I’ve only ever been on the green a handful of times. Trying to learn golfing terms is impossible unless you actively play to understand them. Nintendo knows that the average person may not know what’s being called, the inclusion of a glossary of terms makes it much easier to under the difference between par, birdie, or bogey. While it doesn’t seem like much to someone adept, I had a similar situation when I was learning the ropes with Mario Tennis Aces.

There are 16 characters to choose from and each character in Mario Golf: Super Rush has both a Special Shot as well as a Special Dash. Both these moves are used to cause chaos against other players, with Special Shots preventing other players from taking their shot. Special Dash allows your character to sprint across the course and interrupting the other players who end up crossing your path. You use these moves to make your opponents lag behind you in Speed Golf and inconvenience them at every turn. 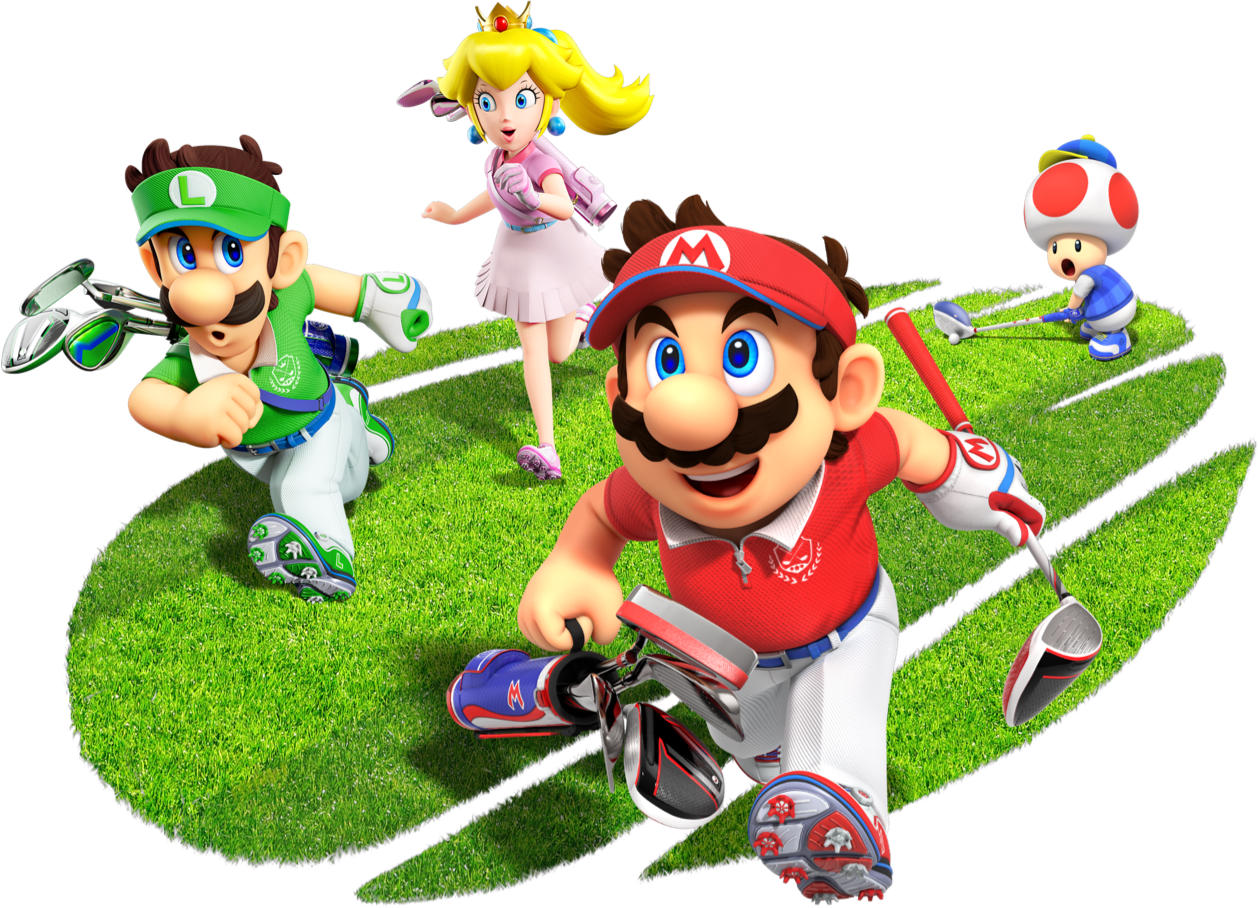 Mario Golf: Super Rush includes a standard control scheme and motion controls for those who prefer simulating the movements happening on screen. Much to my delight, while it wasn’t my preferred method of playing the game, the use of motion controls are smartly implemented. To complete your swing, you have to follow through with the movements you’d have to replicate on the green. These controls add a level of physicality found in Arms and it’ll be fun to test this out with another person in the room. 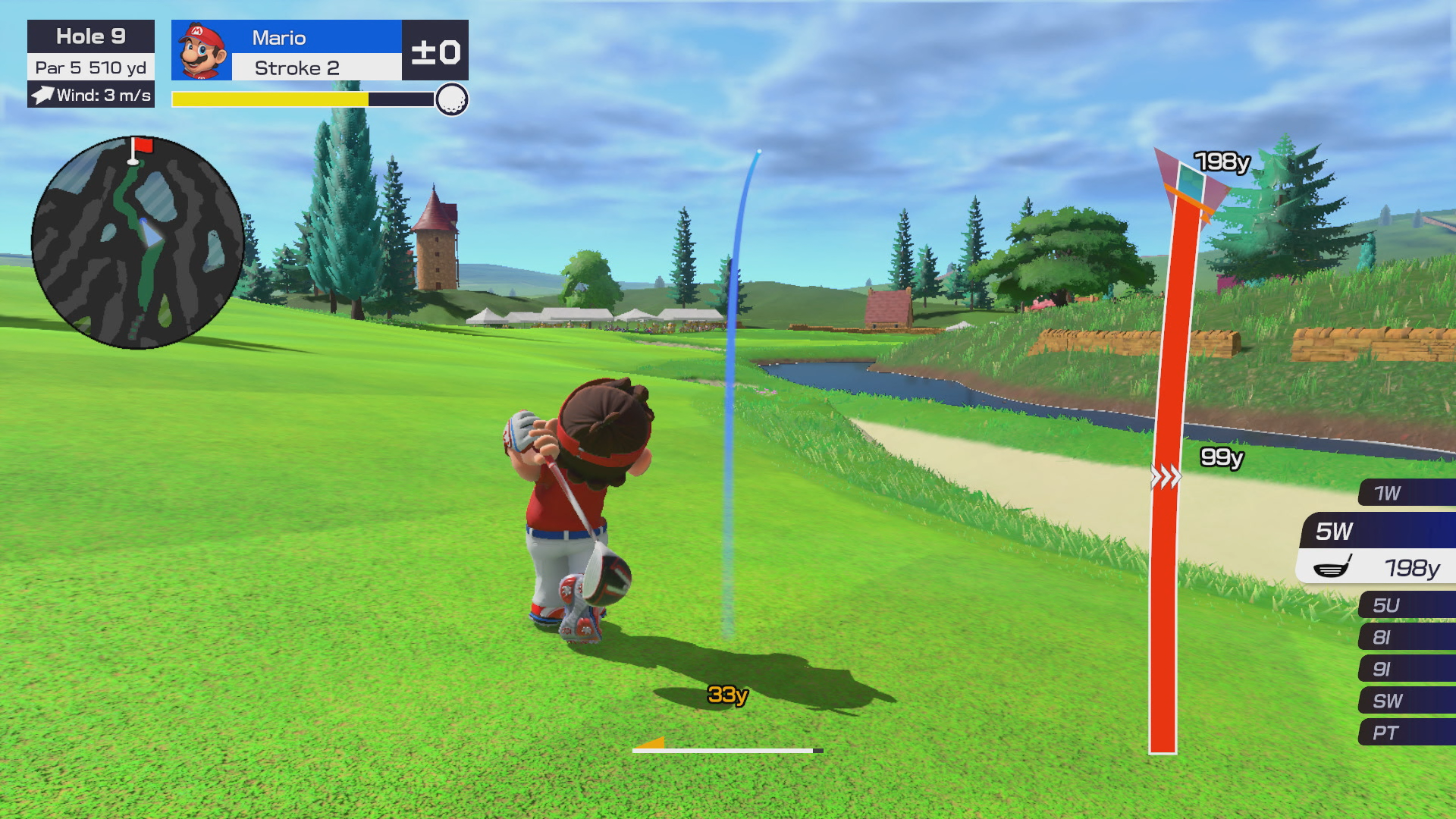 If you prefer something a bit more classic, there’s the basic control scheme, too. You’ll select the shot gauge with the directional buttons then tap the button again to confirm and select power. By moving the left joystick, you can add a curve to your shot by aiming right before your swing. And to top it off, pressing down will add backspin to your shot, effectively decreasing the distance of your ball.

Super Rush has something for everyone, if you’re craving a story mode then Golf Adventure will scratch that itch. Using a customizable character, you begin your career as a golfer in the Mushroom Kingdom. This lite-RPG mode has you visiting coaches from around the kingdom, learning techniques from them and utilizing them. With each level your character earns, your stats increase and improve your ability to play golf with the best in the kingdom. 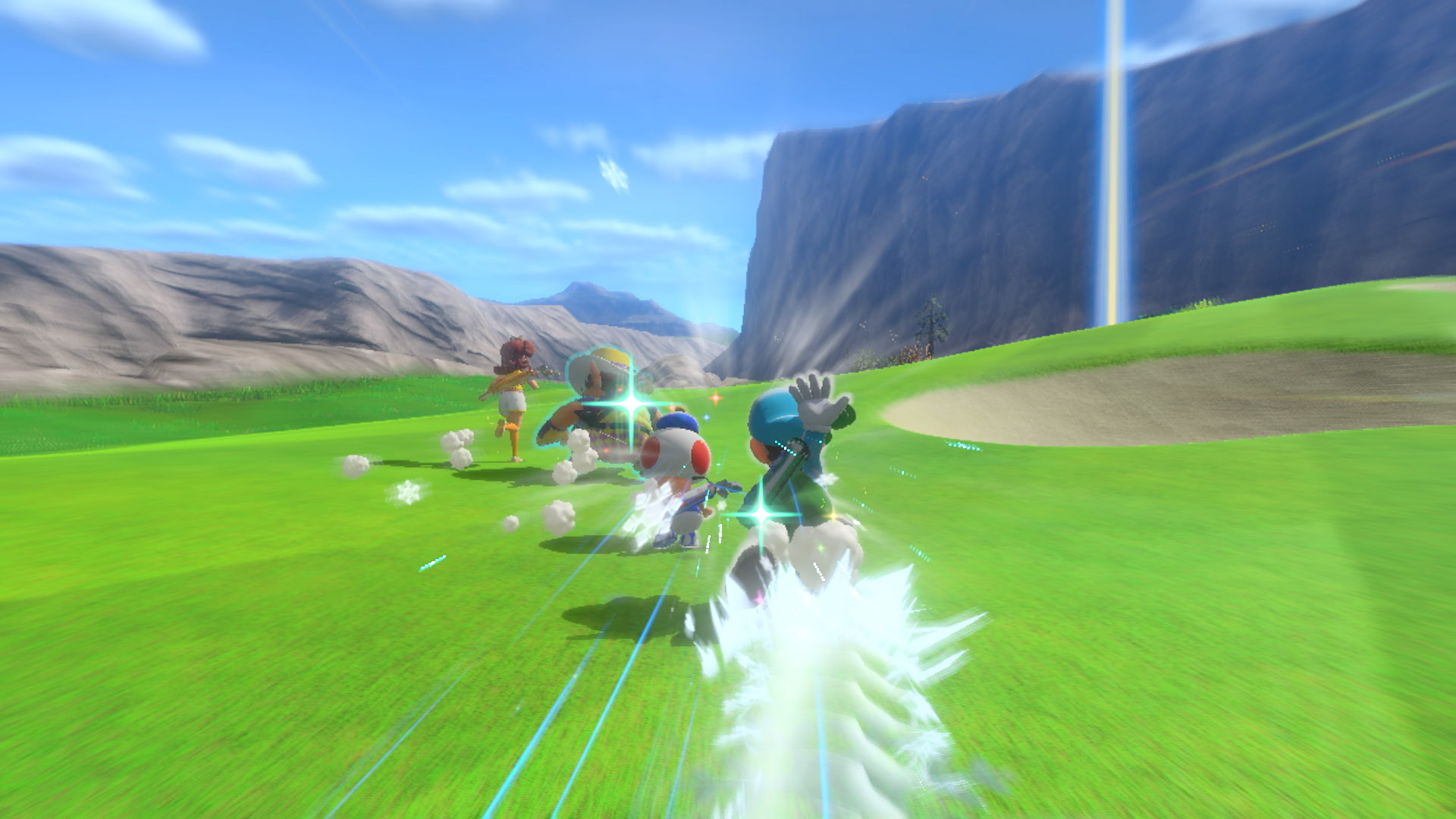 Throughout the story mode, coins are earned and these are used to purchase new outfits and gear. Gear is tied to your stats, so the better the gear you equip on your character, the better stats they’ll have and the better golf you’ll play. 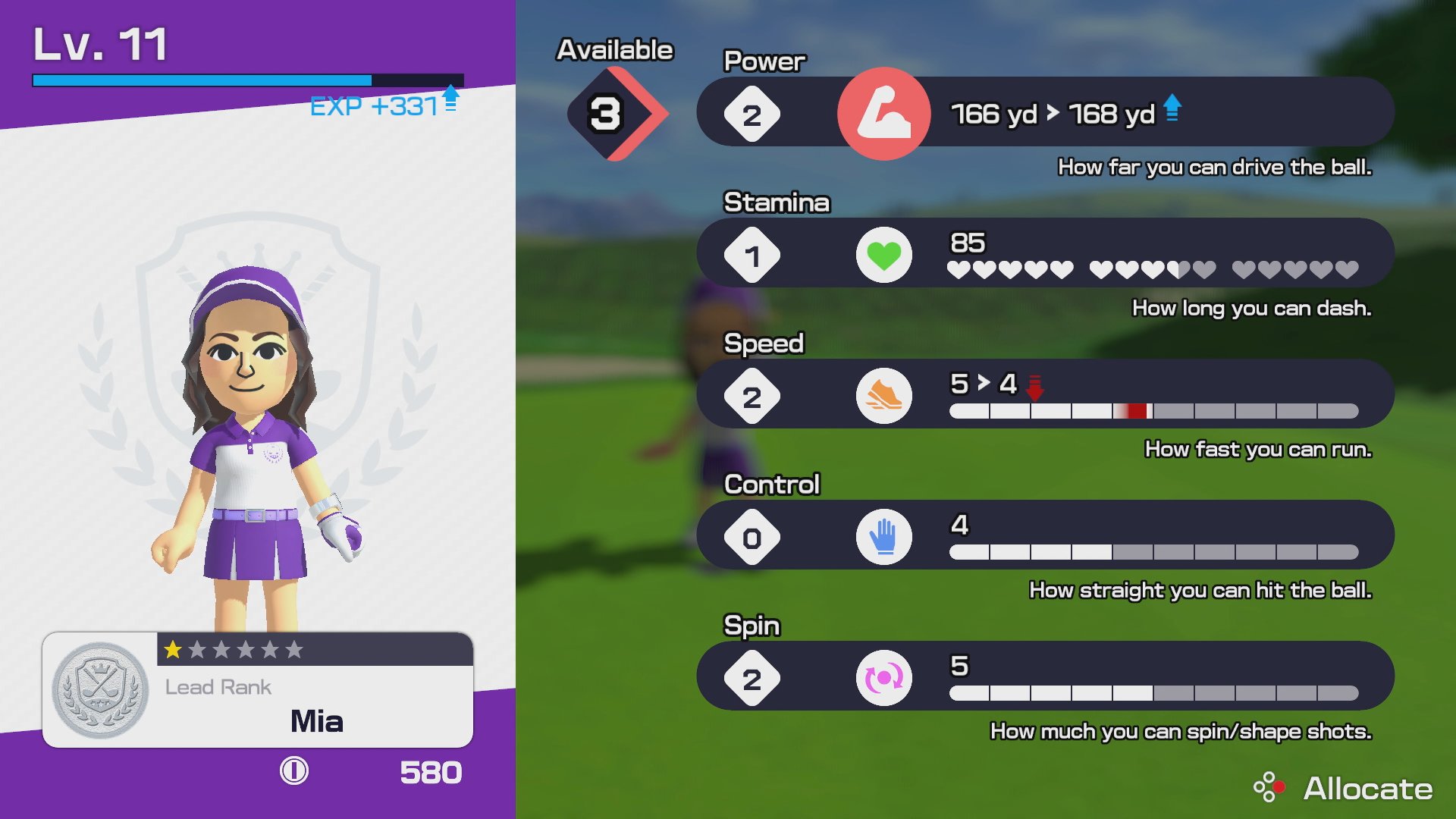 To compare it to Mario Tennis Aces, playing story mode is the best way to acclimate to the game’s core mechanics. While I think that Super Rush is an overall better game, the similarities between modes are reason enough to mention that it is here you’ll learn the ins and outs of the sport and begin your quest to stop Wario and Waluigi.

Give it a little tap. Tap Tap Taparoo!

There’s also standard golf for upward of four players and can be played both locally and online with either 3, 6, 9, or 18 holes available. It’s about as basic as you’d expect from a standard mode and the mode, I spent the least amount of time exploring. 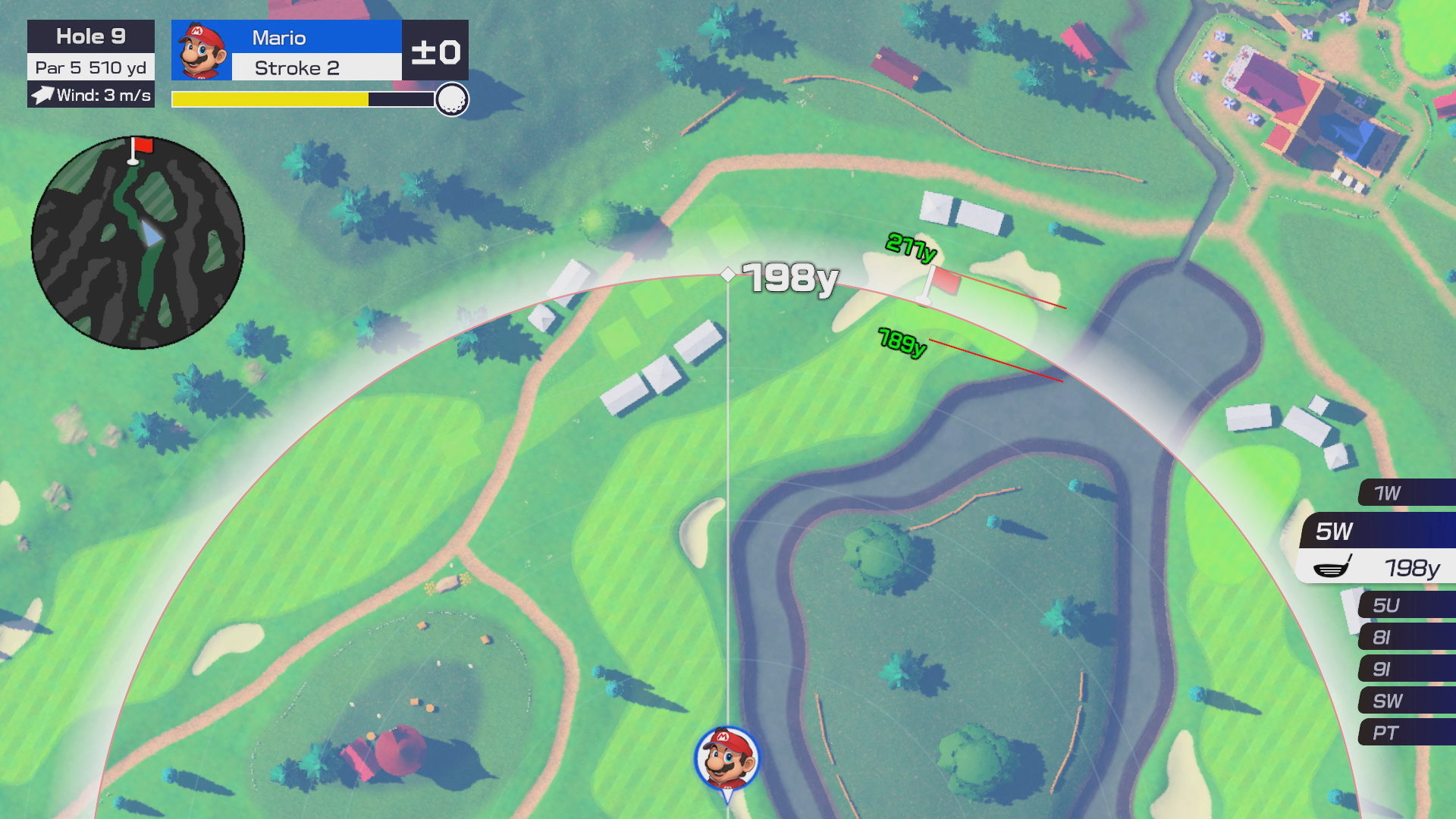 Speed Golf is almost the same as playing standard mode but with every extra stroke adding 30 seconds to your timer, you’ll need to be accurate to win so making sure you are precise is key to winning. You can also use your Special Shot and Special Dash here to mess with your opponents. Watching your opponent topple over and lose coins never gets old and watching the like of Yoshi rollover players with one of his eggs is hilarious. Others like Wario turn his golf bag into a jet and rockets forward, Rosalina summons Lumas to knock opponents down. 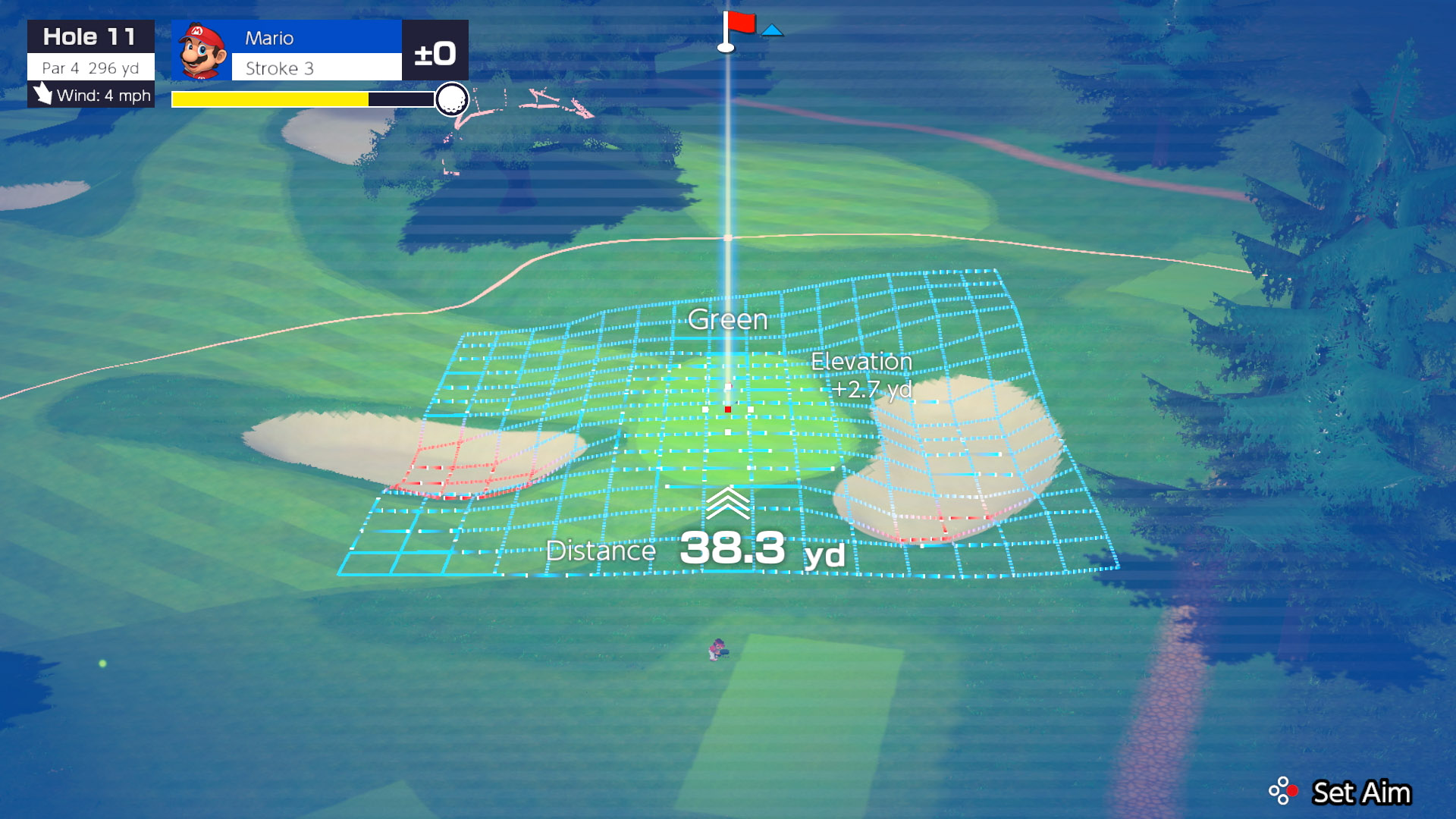 Special Shots return from previous games and each character has their own unique shot to use. Boo will haunt the ball and curve its trajectory, Chargin’ Chuck will blast the ball far from the course, and Luigi will freeze the ground wherever his ball lands. Taking the time to really understand each golfer and who works best for your playstyle is half the fun of golfing in Mario Golf: Super Rush. 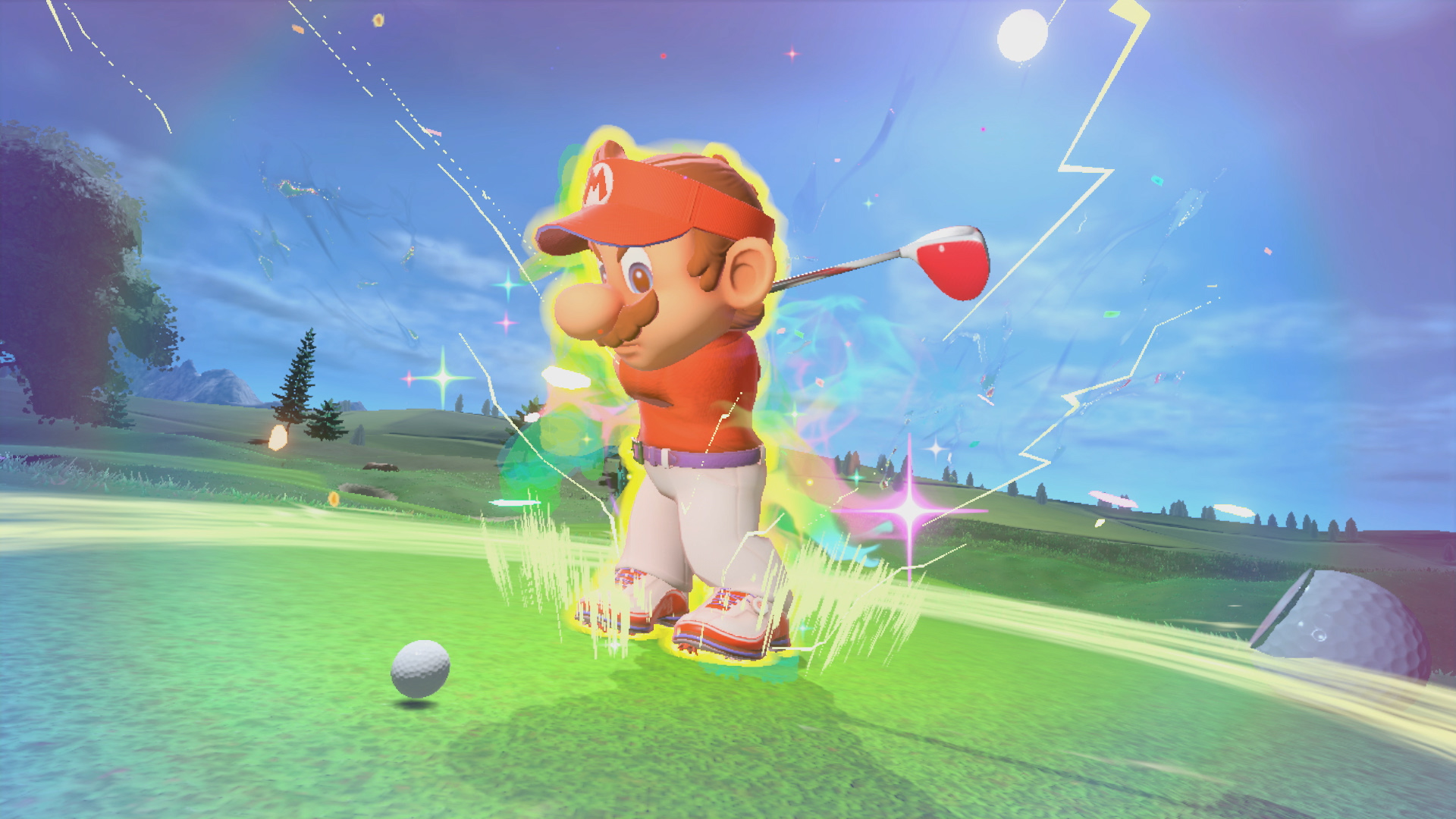 Solo Challenge is exactly what it sounds like and is perfect for one person. The goal here is to complete several tasks before finishing, some might ask you to beat your score of a previous game, and Toad will make the ball grown so he can blast it as far away as possible.

Get in the Hole!

And if you’re looking to make it through Battle Golf, this mode features support for up to four players and the basic objective is to win three holes of golf. What makes this different from Speed Golf is that everyone is playing at the same time, so things will turn chaotic. Once the first player sinks their ball, the hole is closed and no other player can take it. It’s a cool mode to play with a friend but once you add the maximum number of players, things turn upside down and become a mad dash to win. 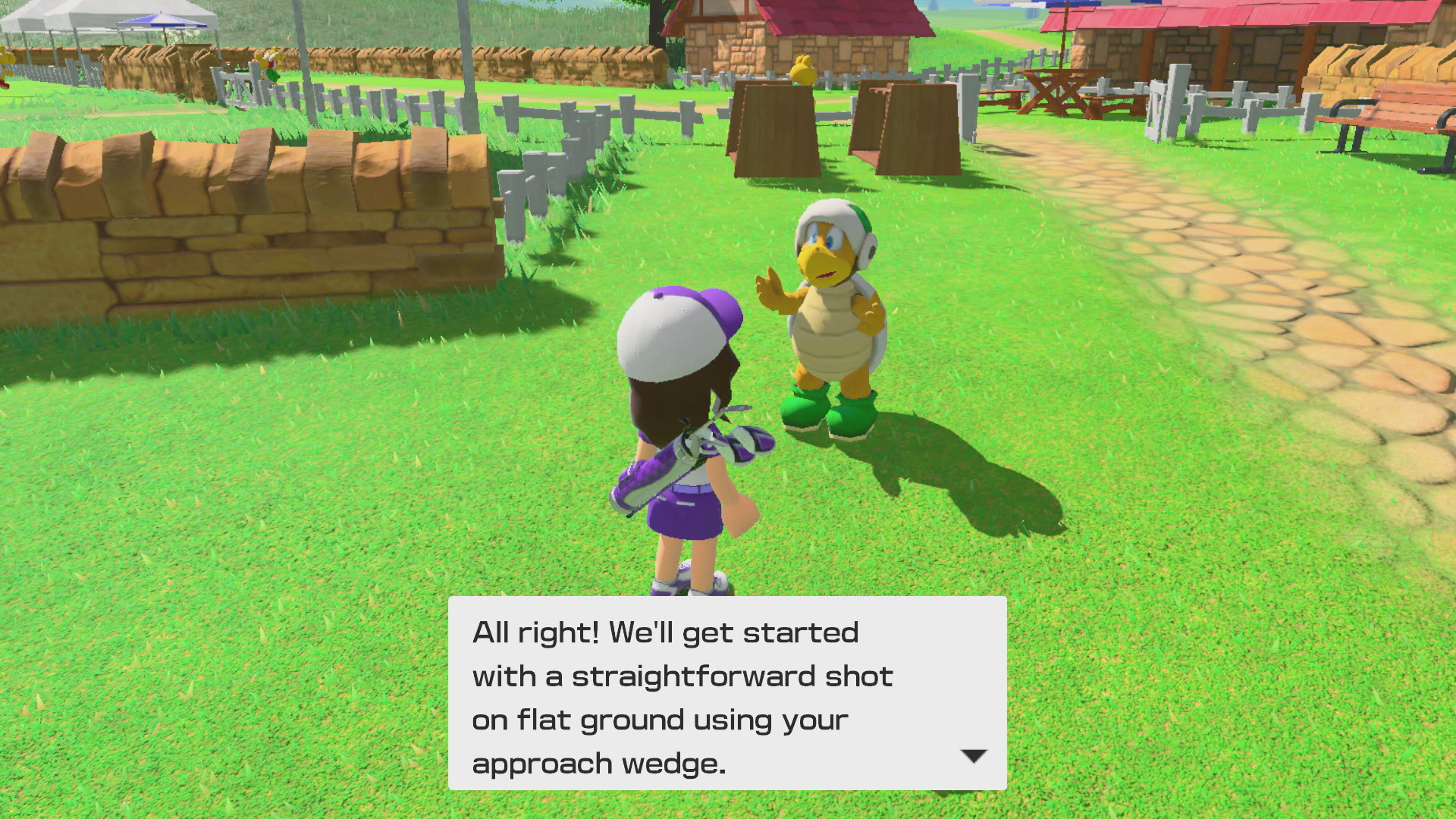 And while I do enjoy playing Mario Golf: Super Rush there is a distinct lack, of course, to play on. Older titles like Wold Tour previously held more courses and while the ones included are fun, the scenery quickly gets old. There’s also a lack of game challenges available outside of Time Attack or Score Attack, so if you’re looking for more, it won’t be here. Same with the online modes, I was a bit shocked when heading online only to discover there is no way to host an online tournament, which I imagine would be fun with four people. Comparably, Super Rush feels like a step back in many regards and the content well doesn’t run too deep.

Mario Golf: Super Rush is the perfect game to kick off the summer. Golf Adventure may not be the most in-depth mode but has its charm and is a great way to learn how to play golf. With over a dozen unique characters from the Mario franchise ready to settle the score, playing golf has never been more fun than it is with Mario Golf: Super Rush. If Camelot decides to develop post-launch content and support the game, it’ll be all the better for it, but the current roster of courses leaves something to be desired.