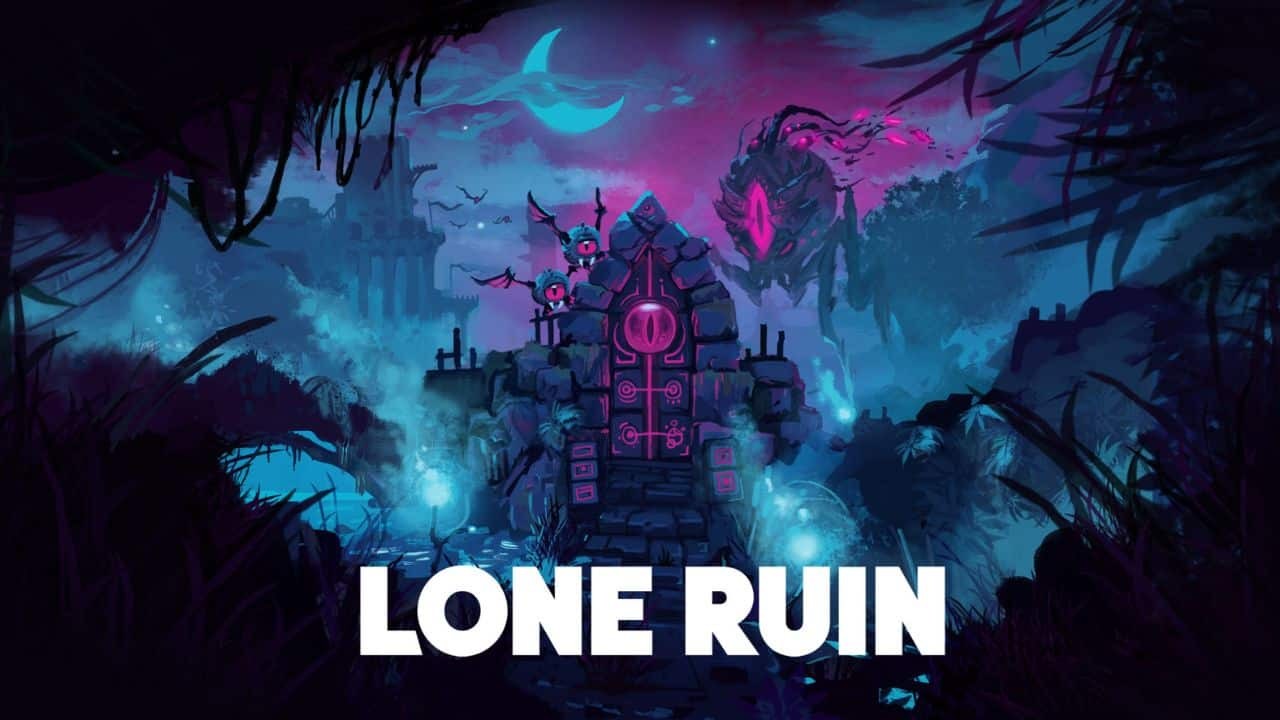 I’ve said this before in other reviews and have thought about it each time I boot up a new game: to differentiate yourself in a now crowded indie game market you really need to do something different. Especially if you’re in a roguelike genre where there are not only a ton of titles, but some heavy hitters like Hades and Rogue Legacy 2 to choose from. Lone Ruin isn’t trying to be either of those, but it is still forging its own path with gameplay that’s fast and dynamic, and a replayability approach that harkens back to the good old days of the arcades and early consoles.

Lone Ruin isn’t chock-full of story, in fact, there is very little to go off of in the game itself. Most of what I gathered about this tall tale came from previews and the title’s description. That may sound lacklustre or maybe even lazy, but Lone Ruin also isn’t here to be a page-turner, and that’s ok.

You’re an explorer who dives deeper and deeper into the depths of a ruined city, acquiring spells and abilities along the way. I was disappointed in the lack of world-building at first, but after a few failed rounds in the ruins, I realized the real reason I’m still eager to play this game is for the battles I’ve already lost and the ones that I know still lie ahead. 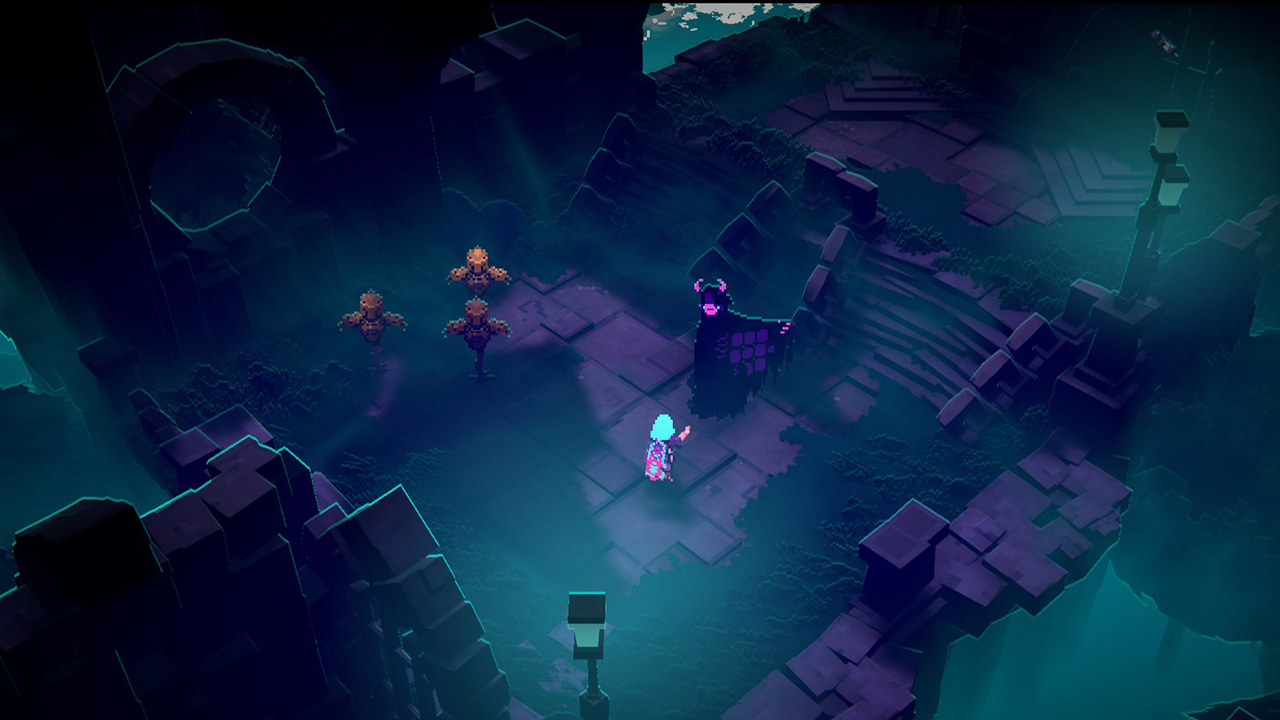 Dashing Through The Spells

Upon entering a run in Lone Ruin, you’re given the option of several spells that will act as your primary active weapon or ability. They range from a shotgun-like blast to a fireball that explodes on impact, a laser that winds up and zips through multiple enemies, or my personal favourite: the boomerang.

Each one of these plays different, a welcome surprise as I thought while reading the descriptions that some of these sounded very similar to each other. What’s even better, is that along the way you’ll be able to upgrade each one several times. So for example on my personal top-tier boomerang; I could make it larger, I can multiply it to have 2 or 3 fly out at once, or can have both of these upgrades if the options present themselves. On top of all that, there’s a really fun and easy-to-use dash you’ll always have at your disposal that can also evolve through upgrades. 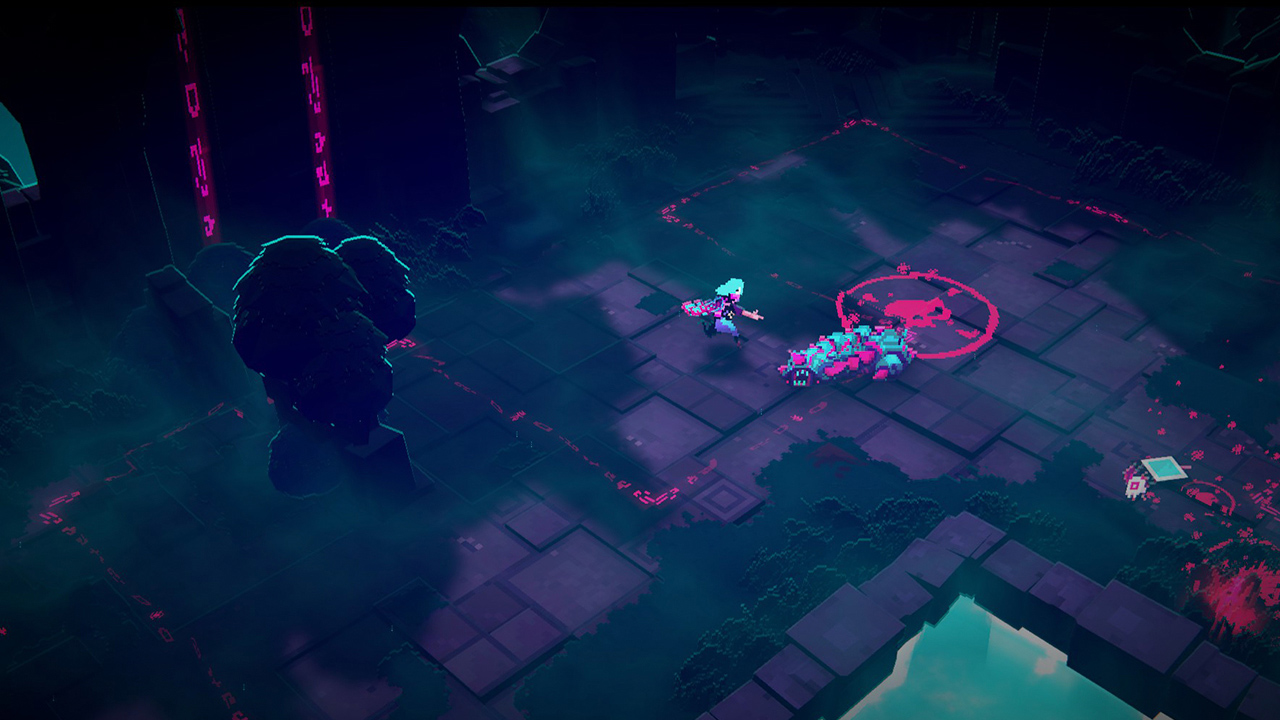 As with many roguelikes, Lone Ruin has some randomization built into it. That comes into play with the spells I mentioned, the wide array of passive additions, and the enemies and their environments. Dozens of enemies will spawn over the course of each run and each of them looks and act uniquely. There could be a large slug-like creature, small bats that shoot projectiles, or even a turret that fires in multiple directions. What I didn’t appreciate until I completed a number of successful runs, is that each one prepares you for the boss stages that pop up every so often. The bosses are big and pack a real punch, but they all use moves and abilities that resemble enemies you’ve just defeated.

I will that Lone Ruin is not for the faint at heart; this game is tough. I found myself struggling to get past the second of three bosses on each run even on the Normal difficulty setting. Bumping down to Easy provides more health and sometimes fewer enemies as far as I can tell, but it’s still a real challenge. My playstyle had been playing with a certain build I found to be the most successful each time, but yours could be totally different. So despite being a very challenging game, it’s still capable of providing variety. 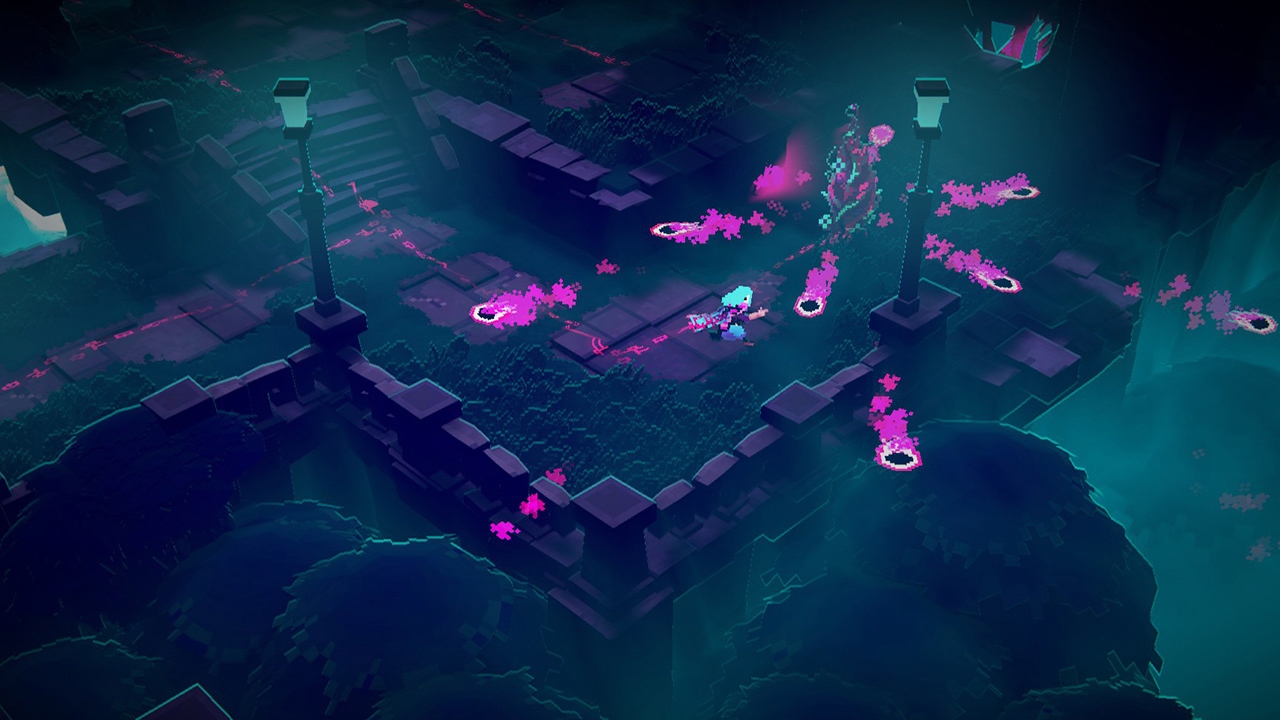 A successful and completed run in Lone Ruin won’t take very long. I estimated about 30 minutes for the Easy and Normal ones I was able to tackle. I was a little disappointed in how short these were, but it also didn’t stop me from playing more. At any time, whether it be after a death or a completed run, you can choose to upload your score to a leaderboard. Having a review copy, I don’t really know where I stand, but you may have more of a drive as more people play this game. 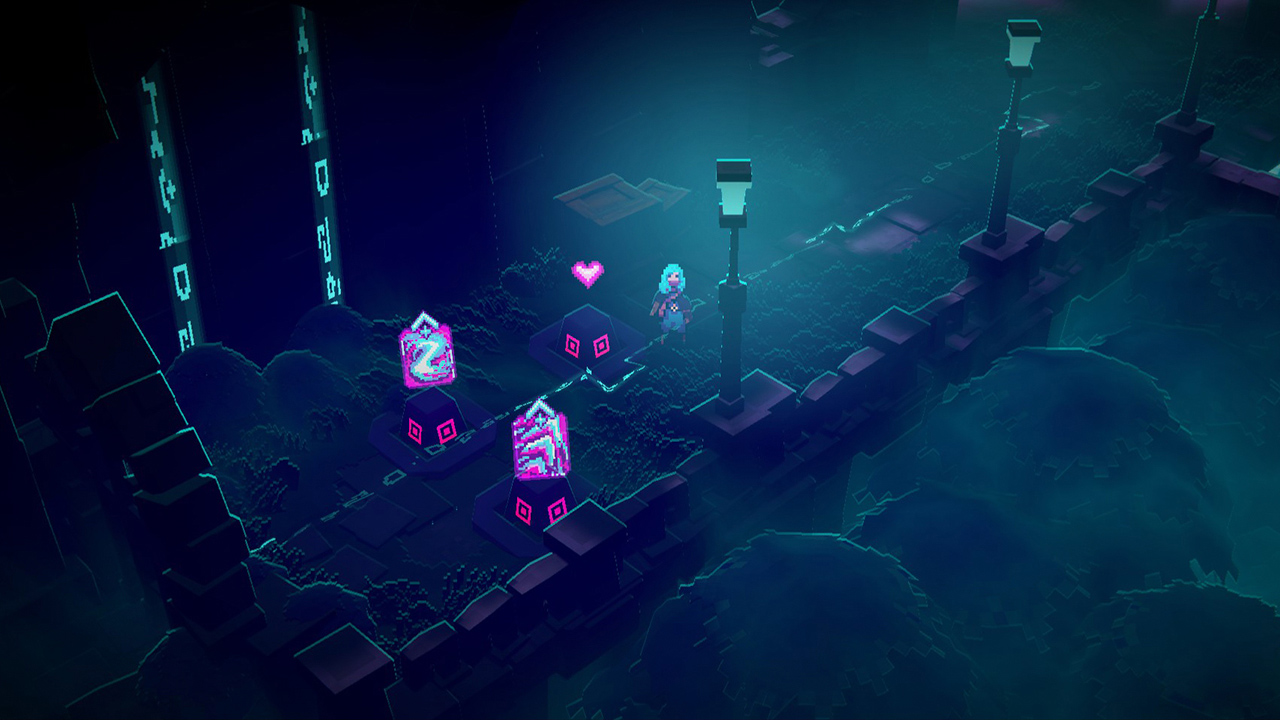 Additionally, there is a Survival mode that also tallies a score and provides more upgrades and evolutions of weapons and abilities you may not have been able to acquire in the main game mode. Survival is where I think Lone Ruin can have real long-term success. Whether it be in its current form or potential additions in the future, it’s the perfect place for leaderboards and a great way to feel like you’re back at the arcades or sitting next to a friend trying to top each other time after time. 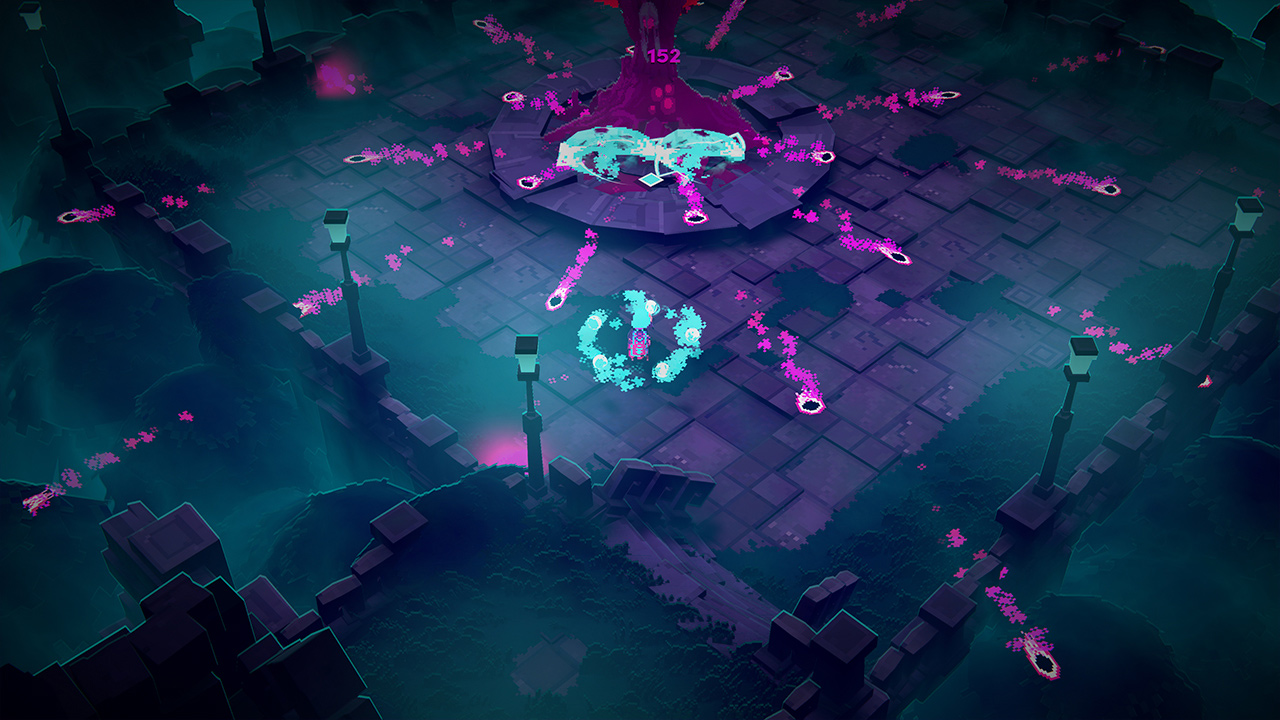 Despite having a short dungeon-crawling mode and a thin story at best, Lone Ruin is still a blast to play. Every spell and every run feels dynamic and sharp. Even when I failed, I never felt cheated and never felt like I couldn’t learn from my mistakes. Lone Ruin may go under the radar, but it’s a really great way to get some roguelike action on the Switch or PC for an affordable price.