Four years ago, Little Nightmares came into existence and was well received. The game spawned a comic book tie-in and even a television series with Anthony and Joe Russo attached. The little horror platformer returns to make your skin crawl this week and it’ll do exactly that.
Little Nightmares used childhood dread to deliver that sense of uneasiness to great success. Tarsier Studios’ follow-up sequel doubles down on the dread and introduces Mono, a new character to the series. What made the first game so good was how the developers used the environment to keep players on edge through tense moments.
The sequel moves on from The Maw, a dilapidated underwater location shifting to The Pale City. Little Nightmares II metropolis is gloomy and full of tall, distorted buildings. At the heart of the game is a transmission originating at the Signal Tower, you’ll have to figure out what’s calling out and it’s not exactly a walk in the park. Little Nightmares II is an improvement in every way

I’m a huge fan of environmental storytelling. With no dialogue to go off, you’re left to piece together what’s happening. The developers tell a story through the various locations in The Pale City. Paired with an eerie sound design that delivers a scary experience. The soundtrack is much braver and I noticed musical cues readying to push Mono into the next section. Like its predecessor, Little Nightmares II is a 3D platformer paired with an assortment of puzzles. Interspersed are often tense stealth sections where the goal is to avoid detection. Most sections have you navigating the environment while remaining undetected. In some cases, you’ll need to hold your breath and swim through ponds and move from cover to cover.
The biggest scares for me were the adults. In Little Nightmares II, there are creepy humans and monsters looking to snuff Mono out. As I played and hit the later sections of the game, I ended up being far more creeped out by the encounters. One in particular that stuck with me was the snake-like teacher, sending shivers down my spine. As they lumber towards me, shooting their guns, flashing their lights, it adds up. The sense of dread I felt playing as Mono and trying to stay alive is what kept me going.
I’m torn on the controls because some levels need precision and in some cases, are hard to line up with precision. Sprinkled through the game are sections where you’ll need to get across gaps or climb to get over a wall. While it seems like Tarsier Studios improved the controls, they don’t feel as good as they could be. 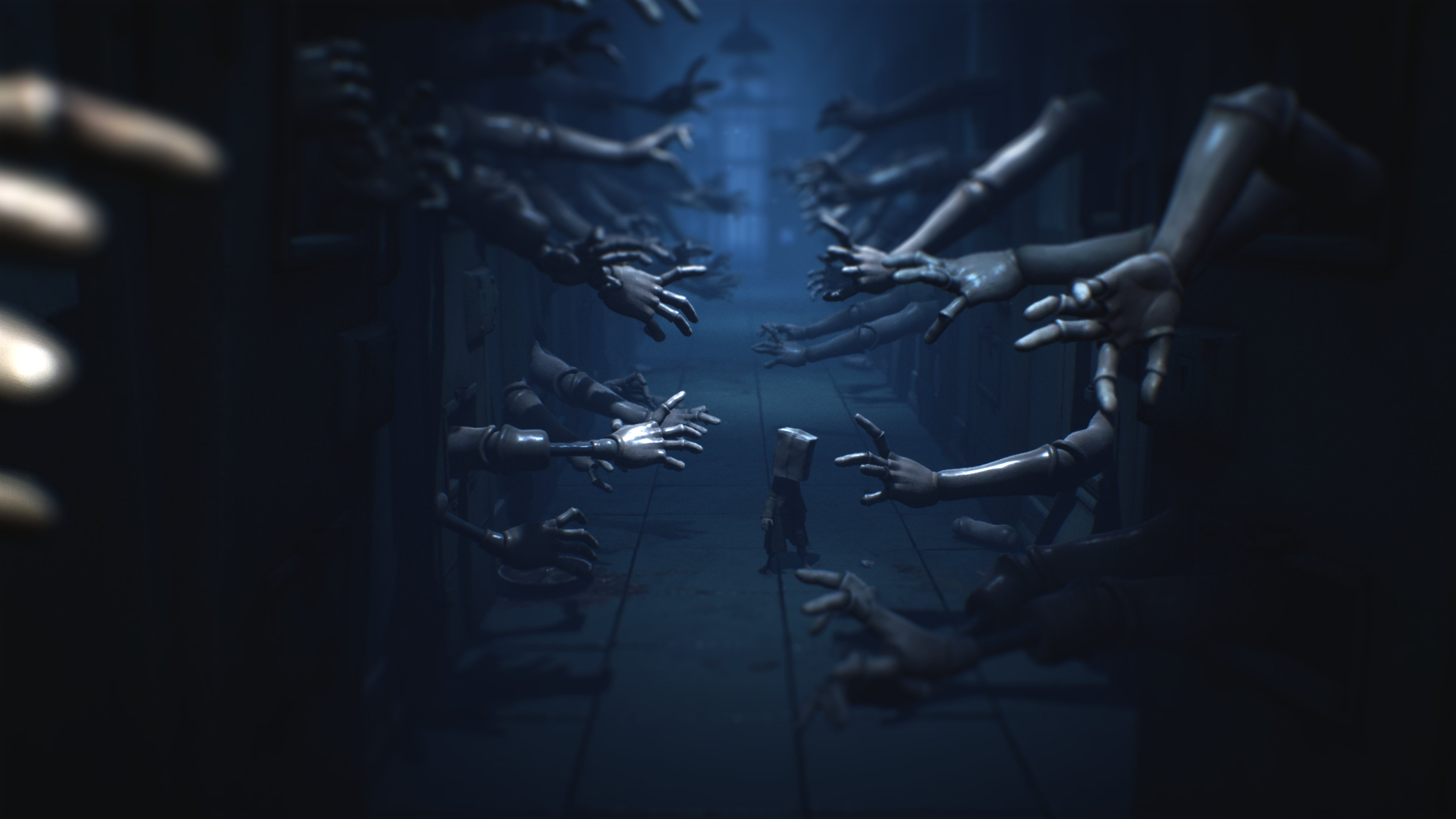 A huge improvement over the first game is the checkpoint system. I sent Mono to his death far more times than I could count and the checkpoint brought me right back. Little Nightmares II knows you’re going to die over and over be it in a trap or other danger and planned for it.

I got your Six

While new protagonist Mono may wear new clothes, he plays the same as Six. Across the campaign, Six feels like a younger sibling that mimics an older sibling. At times, Six is helpful and Mono moves forward thanks to her. Other times, Six is less helpful and causing more harm than good thanks to the AI. I’d find times, where I’m hiding from an adult and Six pushes me into view, killing me. For the most part, Six is helpful as she lends a hand to boost Mono or push an item used to climb an obstacle. And she can be helpful, I imagine programming her was a difficult task but she’s useful in most situations. With that in mind, there is a dedicated button to call Six to assist Mono. It’s rarely necessary though as Six is proactive and she’ll be ready to do what she’s there to do. But the downside is that she removes any of the sleuthing you’ll do to get past a hurdle. But I did keep her close, Mono and Six are a team and I’d hold her hand to stick together instinctively.
The biggest difference between the two characters is Mono’s ability to wield weapons. In most cases, you use these to break through doors or keep enemies away. It’s a basic concept that’s used to push forward more than anything else. Weapons are usually bigger than Mono is and with each swing, the heft of what you’re wielding comes into play. 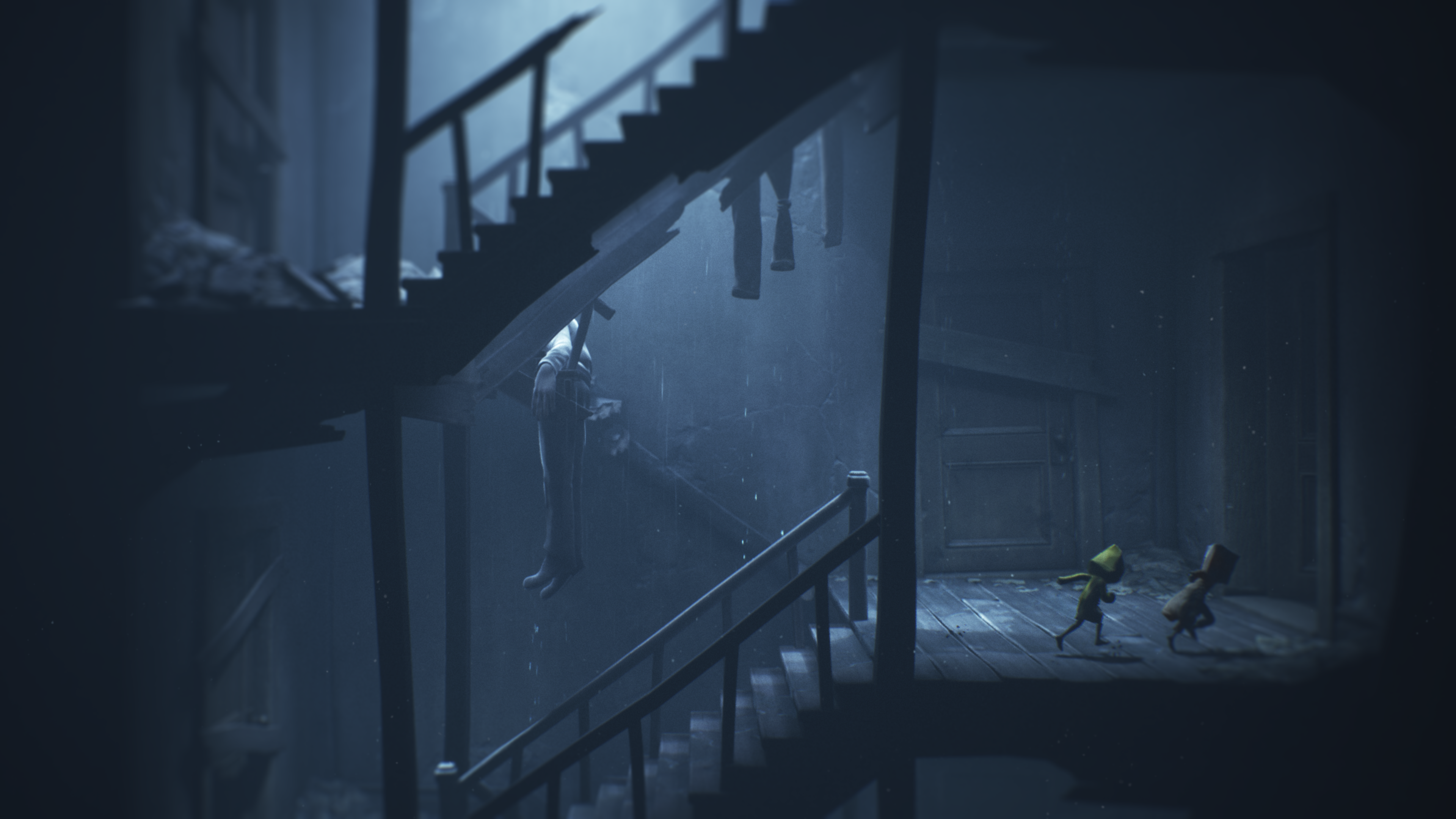 If you’re waiting for a current-gen version of Little Nightmares II, it’s on the way later this year. I reviewed the game on PlayStation 5 via backwards compatibility and enjoyed it. The improved load times and extra horsepower didn’t go unnoticed. This is a dreadful game and it’s also gorgeous thanks to the dark setting and the grotesque adults. Playing through the campaign feels like watching Coraline in a way and it is stunning.

Little Nightmares II improves on the first game and ups the scares. It’s up to you to piece together the events unfolding. The scares are bigger, the world is far more twisted and the gameplay is a nice reprieve from bigger AAA titles. That said, the controls feel a bit clunky and some platforming sections didn’t land for me. Little Nightmares II is roughly 4-6 hours long and doesn’t overstay its welcome. The pacing is good, the music is haunting, and the story is evocative.
[A copy of the game was provided by the publisher for review purposes.]
Reviewed on: PlayStation 4
Related