I don’t think anyone expected both Nintendo and Lego to partner up but it is 2020 and I’ve come to learn to expect anything can happen at this point. After a reveal in March, I knew that I was already sold on it.

I’ve never been a huge Lego savant but this piqued my interest and it offered a great opportunity to branch out and build something exciting at home with family. Lego and Nintendo have effectively created Super Mario Maker in real life and it’s a blast, offering a substantial amount of potential for what may come.

After four years of development, we learned that the partnership became a reality after both parties wanted to work together and do what they do best. For Lego, that meant their bricks, the creativity behind them and for Nintendo, that mean the interactivity and the innovation. A match made in heaven you might say.

It took about a year and a half for the first prototype. From there, it evolved into what we see today, as Lego worked with Nintendo to develop the concept we see today: building fun and interactive levels thanks to the core Lego concept. All you see, all you do is because of the Lego bricks but all levels and ideas come from working with Nintendo. 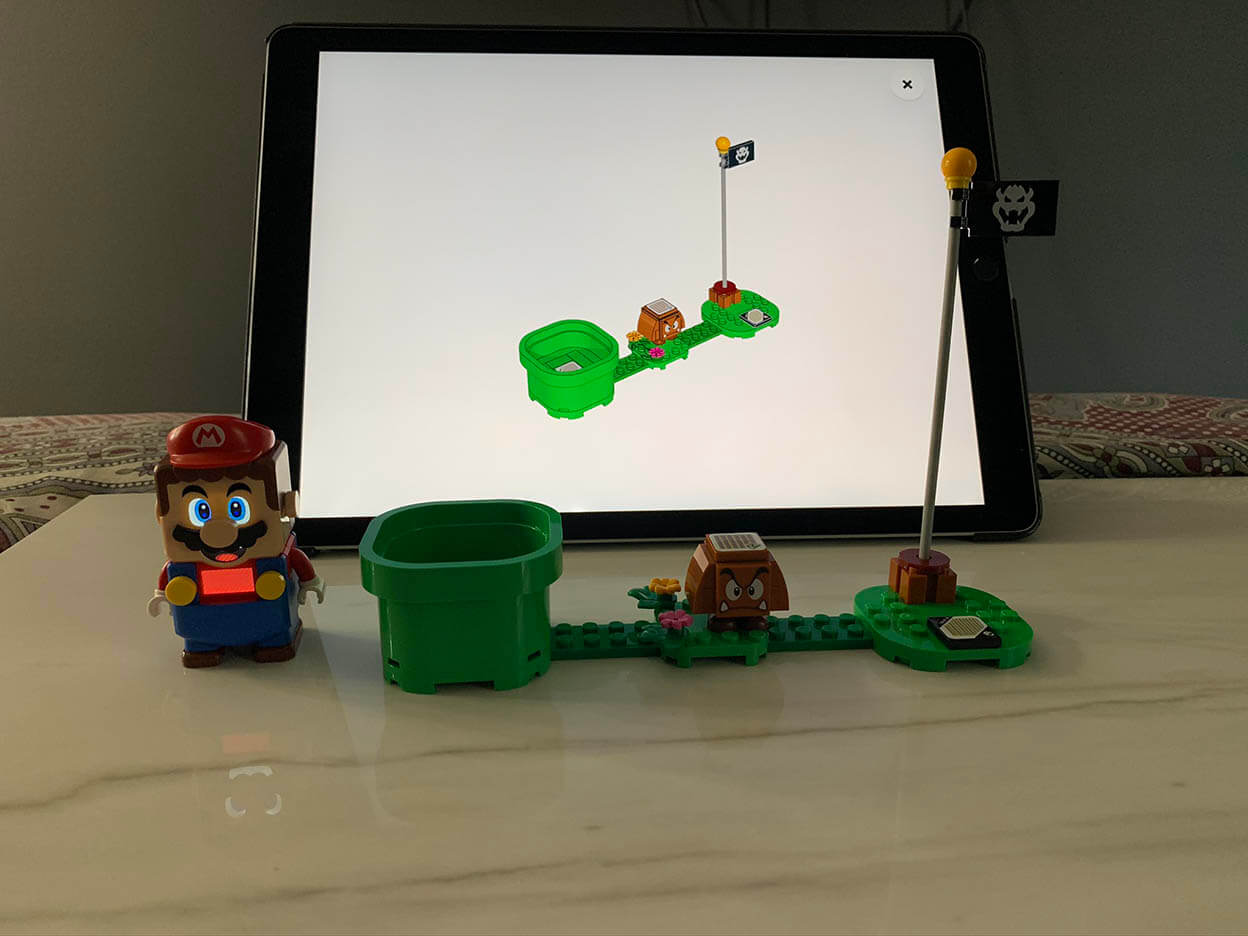 I spent this past weekend excited to start building the Lego Super Mario Starter Course. Sure, by looking at it, this is aimed at children but as a Nintendo savant, how could I not want to at least see what the fuss was about? I spent Sunday afternoon piecing the course together.

After opening the box, locating the Mario figure, popping two AAA batteries in his back and dressing him for World 1-1, I synced Mario to my iPad and Lego Super Mario app which is available on iOS and Android.

I should note that there is no physical guide to help you build the set. Instead, the app does everything and the companion app is fundamental to enjoying the experience. It’s done in such a way that allows the builder to feel a sense of accomplishment at not only assembling each piece but by doing so in a digestible format that anyone can follow. Mario was quick to pick up the required Bluetooth connection and the companion app on my iPad prompted me to update Mario, which took only a few minutes.

After that, things went far smoother than I imagined. I was anticipating spending the afternoon scratching my head, full of assumptions on how to assemble the Starter Kit but things have certainly changed since the last time I had any time with Lego.

Thanks to innovation and simple on-screen instructions that break down each package of Lego parts, we assembled the entire Starter Course within an hour and a half (we spent more time playing with Mario and Bowser Jr. than I’ll openly admit) and were quick to start playing around. 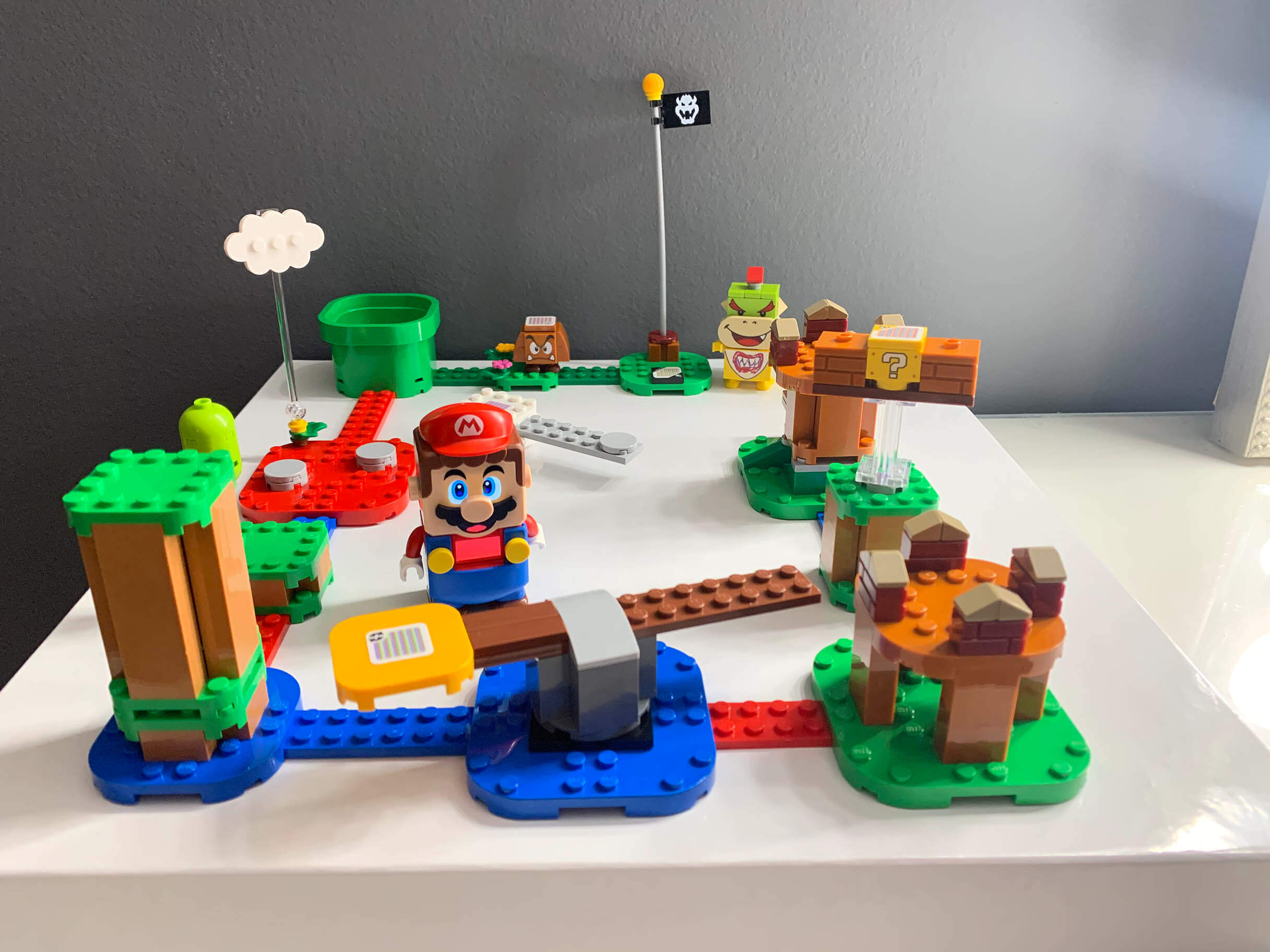 I was curious even before receiving the Starter Course, how Mario worked, how that figure knew what was happening. Nintendo helped develop the optical sensor that is found on the bottom of Mario, and they helped Lego develop that concept. Even Mario’s eyes and mouth are animated and his chest can illuminate a wealth of information including coins, a countdown timer and odds and ends about the starter course.

A cool thing that I’ve seen is that any Lego brick will work when combining with the Lego Super Mario figure. Generic Lego offers colour detection, so if you place Mario on red bricks, he’ll show flames on the screen in his chest. Green bricks are grass and of course, blue blocks are water. If you’re looking at a way to expand what you have without breaking the bank, consider using the Lego pieces you already have in your home.

In its simplicity, the barcodes you’ll find on a Goomba, or Bowser Jr., or even at the end of the level allow for Mario to generate a reaction to what he lands on. Goomba’s offer a few coins, the iconic Question Mark block, and the Warp Pipe, all produce specific and familiar sounds that feel like a real video game. Mario even falls asleep when he’s not being used in the Starter Course and has a handful of familiar phrases the spouts.

Lego Super Mario is made for children but as many of us grew up with the famous Italian plumber might be curious, this is a fun little project for the weekend. It’s easy to assemble, brilliant in execution and a video game come to life. You can add, remove and remix the set pieces however you wish to do so and with so many pieces including Character Packs that include favourites like Paragoomba, Fuzzy, Spiny, Buzzy Beetle, Bullet Bill, Bob-omb, Eep Cheep, Blooper, Urchin or Peepa.

You can also grab expansions like Bower’s Castle, Guarded Fortress, Toad’s Treasure Hunt, and Piranha Plant Power Slide to develop an exciting world for Mario to play in, I’m looking at what to pick up next since the Starter Course is the only the beginning. Of course, I’ll be waiting a while since most expansions are sold out in stores. Your kids will get more out of this than anyone else and by marrying Lego and Super Mario together, new generations of children will find a new friend to trust for years to come.

[A preview sample was provided by the publisher for this review]