Building a galaxy one brick at a time

I’m one of the hundreds of millions of people who grew up with LEGO. In my day not only did we have to snowshoe to school in blizzards, but we also built generic LEGO sets like the Police Station, a Saloon, and the oh-so-cool Pirate Ship. In my teens, Star Wars and other brands began to pop up when Episode 1 and the Special Edition films hit theatres. It was awesome, but also very expensive. Thankfully LEGO Star Wars: The Skywalker Saga allows me and countless others to experience these great stories and toys throughout dozens of hours of gameplay and saves hundreds of dollars while doing it.

A LEGO Galaxy Not So Far Away

The beauty of LEGO Star Wars: The Skywalker Saga is how accessible it is; from the way that it plays to the way it tells the Saga’s stories. I’m a huge Star Wars fan and when I see and hear certain scenes from these nine films, it hits me right in the feels. You can tell the developers are on a shared wavelength with inside jokes, deep-cut references, and even obvious ones; they all feel like quips in Pixar films where kids will enjoy them, but the adults will understand and chuckle at the deeper meaning. 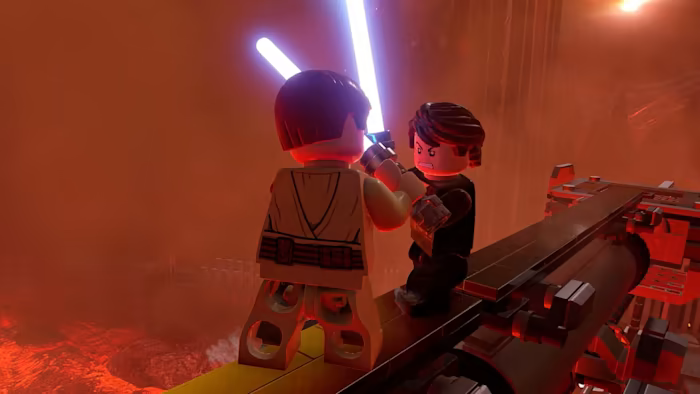 If you are a lifelong fan of Star Wars and you’ve seen all the movies, there’s nothing new to be told here. The game is really about the presentation and how the stories are adapted into LEGO form. TT Games has always done a good job of creating an amusing and family-friendly galaxy far, far away. I fondly recall playing the titles they released based on the original trilogy. Back then, there were no voice actors and the laughs came strictly from physical humour. And while I do miss that, thankfully the voice acting in LEGO Star Wars: The Skywalker Saga is well done. Whether it be Obi-Wan, Finn, Rey, Leia, C3PO, or a random resident on Tatooine, you’re going to see and hear great work. 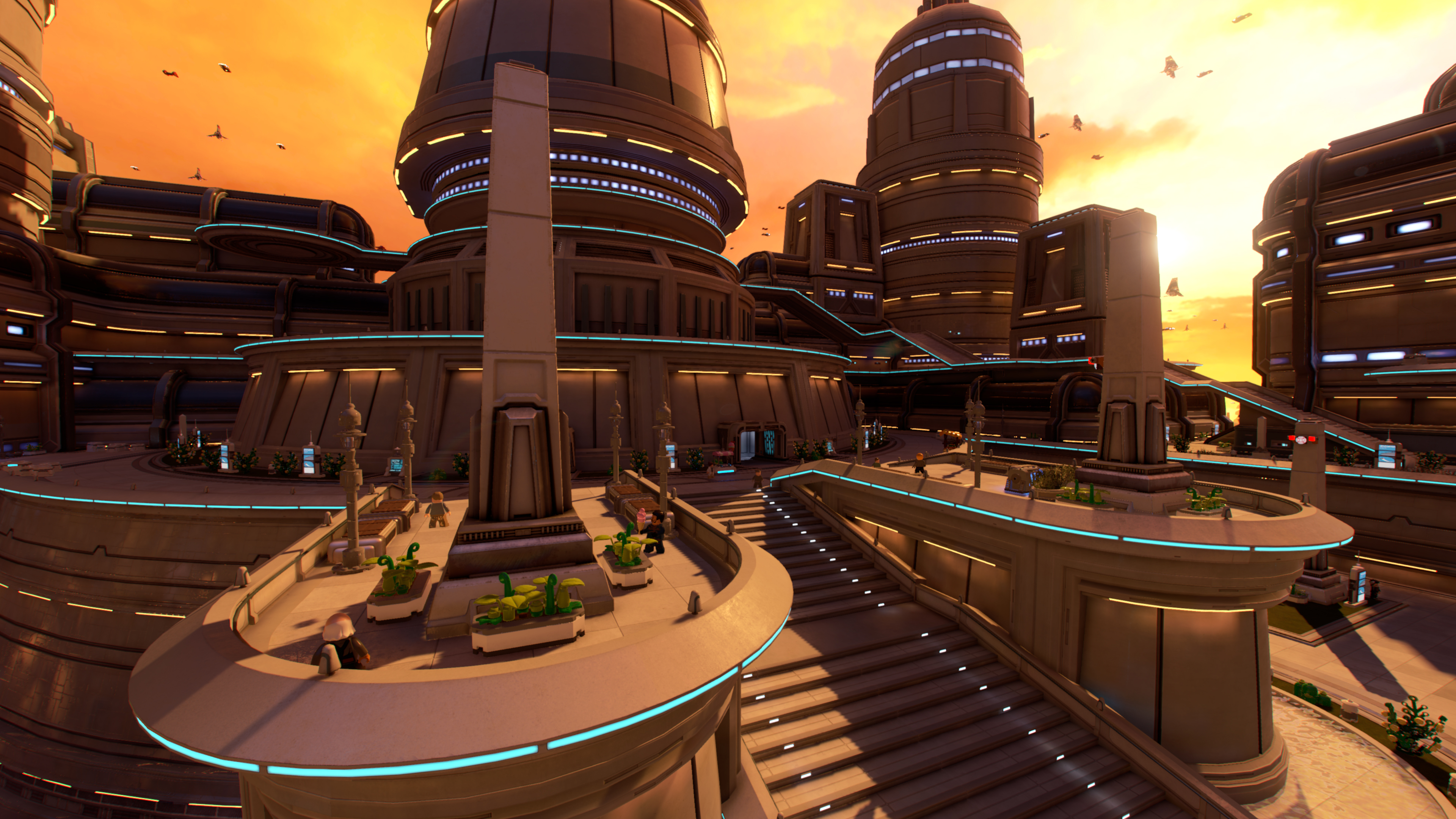 Building Blocks for a Massive Galaxy

This game is huge. And when I say that I don’t just mean how big they’ve made each world, space station, and action scene. LEGO Star Wars: The Skywalker Saga has hundreds of items and characters to collect across each of the nine movies. There is some major upside to that, but also some negatives, and I’ll get to that soon.

The feel of the game has changed on a fundamental level, the camera is closer to the characters and presents the game in a more traditional over-the-shoulder 3rd-person action game aesthetic. This not only gives you a better look at the game’s detail but a tighter and more dynamic feel to the action. The LEGO series of games has never shined with their gameplay for me, it’s always been about bringing a brick-filled world to life. LEGO Star Wars: The Skywalker Saga has stepped into the current age with a combo-like system to take down the Separatists, Republic, and First Order. A couple of well-done tutorial hints and you’re off and running through the galaxy taking out one droid or Stormtrooper at a time. 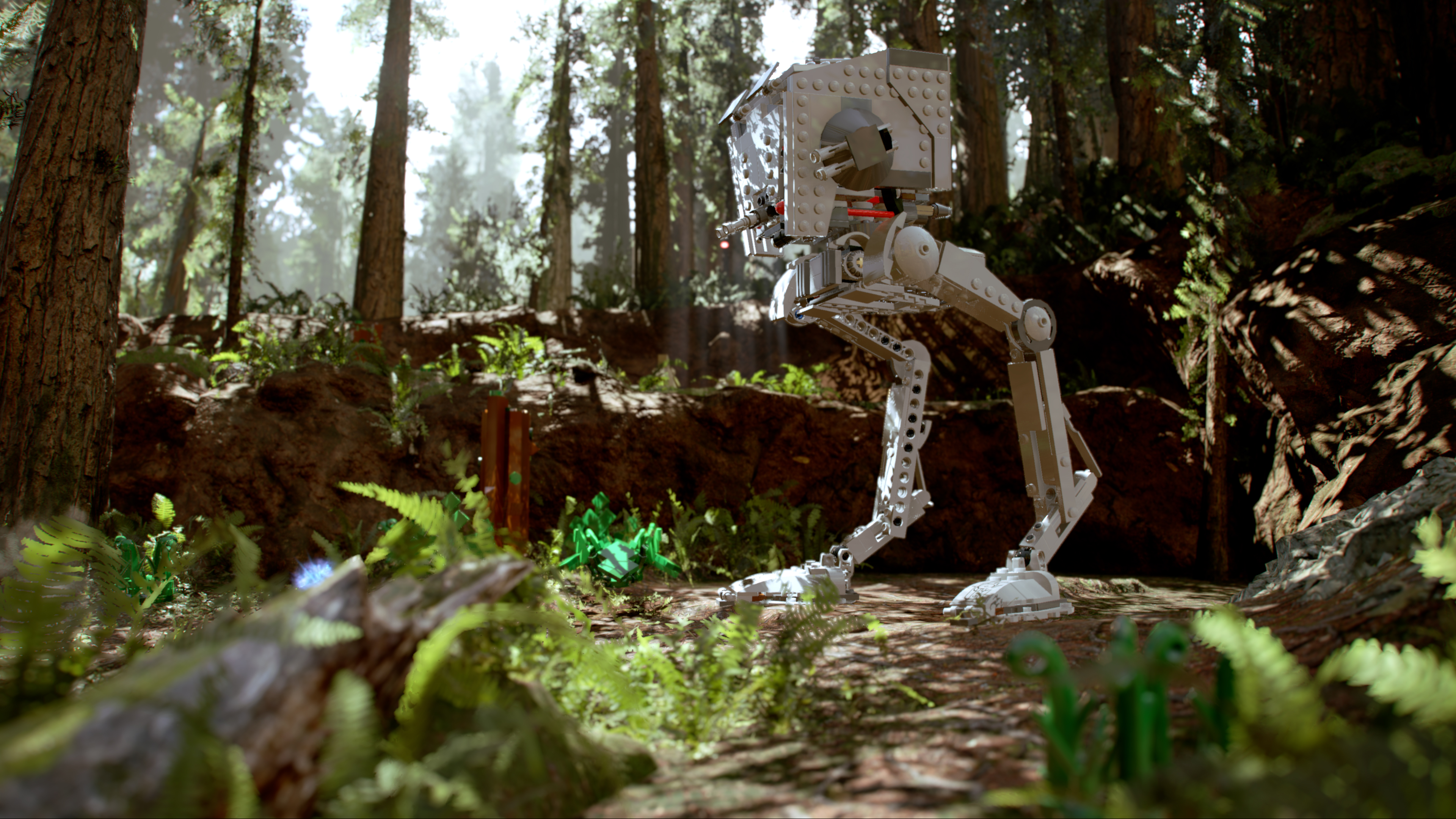 There is SO much to unlock in this game that on one hand, it’s a massive value add, on the other, I found it really bogged down the gameplay and story beats. The flow and pacing in the game feel inconsistent and slower than they should be. I spent most of my time trying to grab studs (currency for upgrades) and locate items that would allow me to improve my abilities. Some of these experiences are clever and fun, but most of them just take you away from the real action and feel tedious.

This is where I step in to recommend you start the game on Episode 4 or 7. This has nothing to do with the films themselves, but the gameplay and the way things are structured. LEGO Star Wars: The Skywalker Saga shines brighter throughout Episodes 4-9. The collecting and unlocking loop is largely the same, but the fun action beats are longer and more frequent, which really changed my perspective. 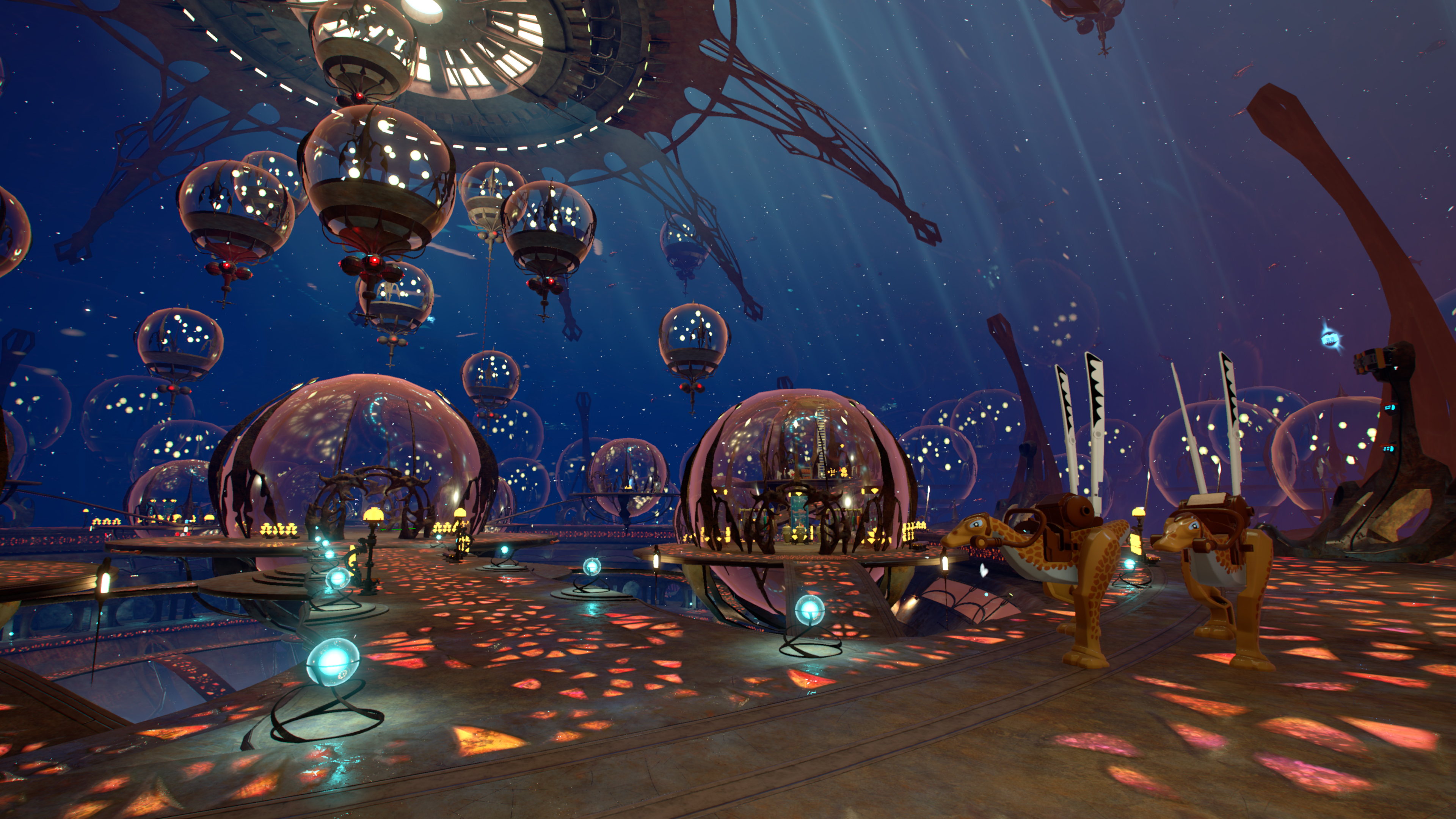 After Episode 3, I felt like I’d seen what the game had to offer. Thankfully I was wrong and the galaxy becomes much more exciting. One of the most engaging parts of the game is the ship battles and chase scenes. There are over a dozen sprinkled throughout LEGO Star Wars: The Skywalker Saga and no matter which one it is, it feels really cool to be flying a LEGO Millenium Falcon across the Jakku desert or around the Death Star.

As I mentioned earlier in the review, there is a whole lot to love about the game’s presentation. It looks as sharp as a new X-Wing flying through the stars. The attention to detail is incredible; characters will have scratches or dirt stuck between their joints, ships not only look great, but they also sound amazing.

And then there’s the writing. If you’re a pop culture, movie, gaming nerd like me, there are so many fun jokes to take in you’ll be having more than a few chuckles as you play. Qui-Gon Jin has a Taken joke, there are references to Space Balls, and self-reflecting moments that not only poke fun at LEGO but some Star Wars lore and history. 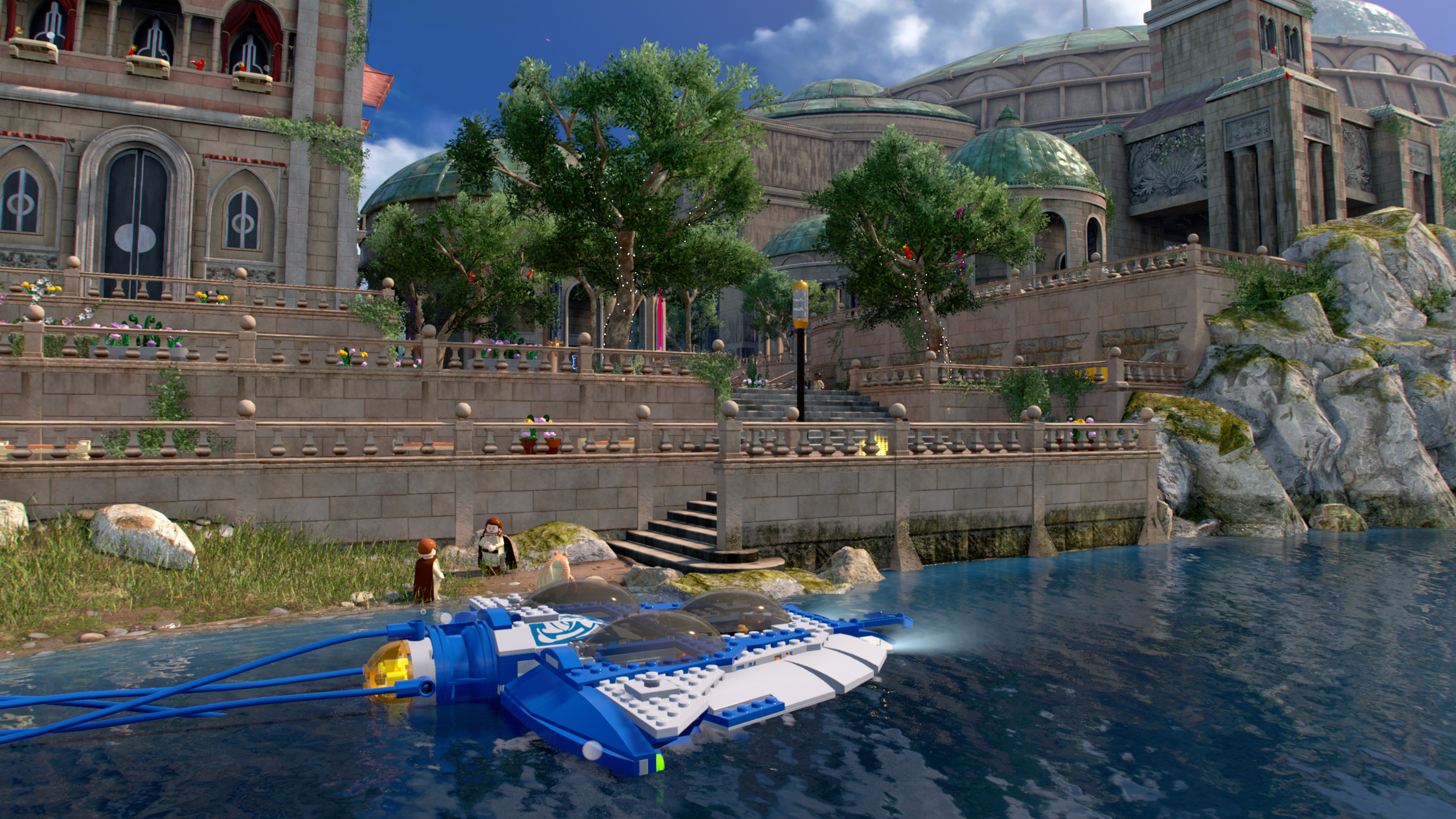 I spent a decent amount of time pinpointing what felt off to me while playing this game, but that’s only because it felt like we got off on the wrong brick. In some ways it delivers, LEGO Star Wars: The Skywalker Saga is a massive game with engaging gameplay loops and literally hundreds of things to unlock. Despite an inconsistent delivery, I still had a ton of fun playing through a Star Wars galaxy built of LEGO.

It’s hard not to recommend this to lifelong Star Wars fans and even harder for an adult child like myself not to enjoy an experience that mashes together two properties I’ve loved for decades. If you’ve played a LEGO game before, you’ve seen most of what there is to offer here, but that’s not a bad thing, TT Games has created yet another memorable game that if you wanted to, you could sink dozens of hours into and always find something new to uncover.