Marvel has been an unstoppable force dominating with their cinematic universe. Each movie Marvel releases has consistently tried to improve and outdo the previous one. This is the Lego universes’ take on the cinematic universe, so you’ll be experiencing the movies with Lego this time.

Now, this game doesn’t faithfully follow those movies per say, it jumps around jumping from movie to movie to piece together a storyline. The issue with this is it also makes for some confusion if you haven’t recently watched the films to remember what happened and when. TT Game’s takes inspiration from their wonderful and original game Lego Marvel Super Heroes which launched back in 2013 and expanding on the formula for Lego Marvel’s Avengers. There is an open world hub that is utilized much like many of the Lego games that came before. Movies including Iron Man 3, Ant-Man, The Winter Soldier and Thor: The Dark Word are included which also come with their own hub world to explore.

The hub worlds are impressive recreating highly detailed and realistic versions of Manhattan, Asgard, Washington, Sokovia and more. These are some of the best hubs Lego has to offer and are scattered with collectible to find and puzzles to solve. Lego Marvel’s Avengers also takes heed to make sure the plots of the Phase 2 movies stay mostly intact – minus some character deaths that are either omitted or reworked in a hilarious and family-friendly way. TT Game’s is known for creating hilarious games out of established properties and this game is no exception, it is really funny!

Any of the characters who are associated with the Fox side of the Marvel franchise doesn’t make an appearance sadly, which is most likely because of where the rights belong back when Marvel was selling the rights to different studios. A real shame we don’t get to play as The Fantastic Four or The X-Men because of this issue.

Lego Marvel’s Avenger is meant to be played with another person by the way – the game is friendly in that aspect and nearly everything can be accomplished together with someone. A ton of battles from the movies are recreated here but the issues I would often have my guest have to wait while I would be doing something and vice versa. Boss battles would leave only one person available to play. Prime example being the opening battle at the castle, my second player was stuck outside blasting enemies until Captain America was done inside – it was tedious. The co-op moves were badass too, by the way. The introduction showcases a fair amount of these moves and goes well beyond the standard button mashing associated with Lego games. It’s my favourite addition!

A few issues I noticed that unhinged my experience was the uneven sound editing being brought in from the films and mixed with the games effects. The authenticity is questionable when you’re rehashing audio from a film.

The battle between Marvel and DC’s cinematic universes’ will be a long and drawn out battle, the focus today is how well Marvel has turned their catalog in a profitable juggernaut! Traveler’s Tales does well with many franchises and I think when paired with Marvel, both get a chance to shine and bring comic books to video games in a way like no others can. Lego Marvel’s Avengers is countless hours of exploring, unlocking and collecting fun that is perfect for the entire family. 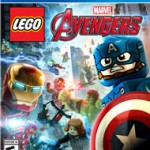