For fans of the Horizon series of games, LEGO Horizon Forbidden West Tallneck Model is an exciting way to revisit the world built by Guerilla Games.

Horizon Zero Dawn and its sequel Horizon Forbidden West have featured some exciting monster designs that have become iconic in their own right. Several years ago, I was reviewing Guerrilla Games’ first new IP since Killzone and came upon my first Tallneck. I knew at the moment that the creature players would discover and interact with within the Horizon series would be special — familiar but threatening while offering a wonderful foil for Aloy to deal with in a post-apocalyptic environment. 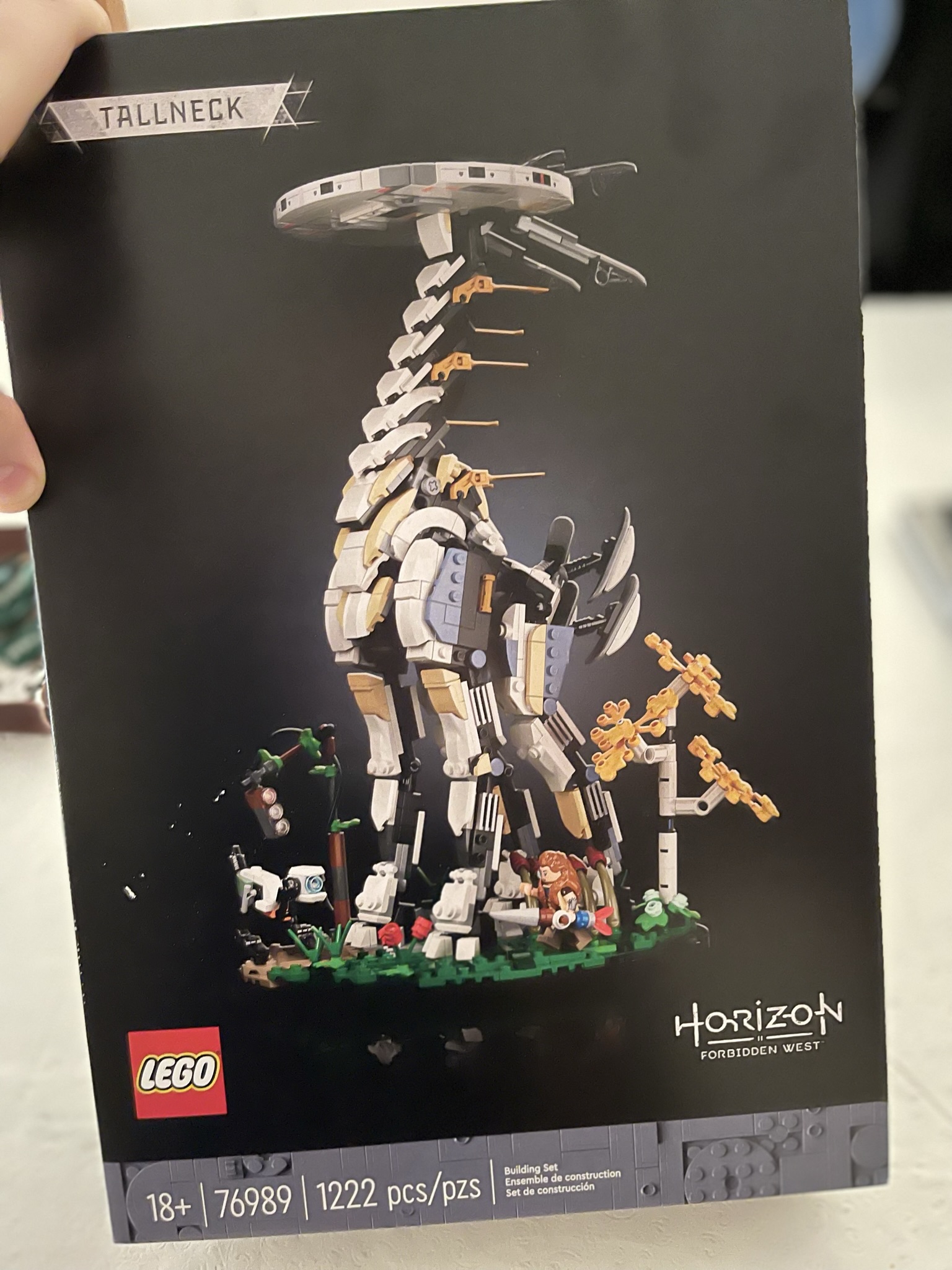 This year’s sequel improved and expanded on the beast players would discover on the way to the Forbidden West but nothing can compare to the Tallneck. Serving as a waypoint for Aloy, a way to establish a chunk of the map and clear the fog of war, these creatures are generally tied to an environmental puzzle required to be solved to reach the top of their heads. Thankfully, you won’t have to solve any puzzles to build one as Lego has partnered with Sony on a Horizon Forbidden West model.

I’ve only dabbled with Legos over the years but I’ve always respected what the name inspires. People are passionate about their Lego and after my last interaction with the Super Mario Starter Course in 2020, I had finally begun seeing why colleagues and friends enjoy building these wonderful figures. While Lego has generally been marketed towards kids, there has been a shift over the last few years to really make it something anyone of any age can build. 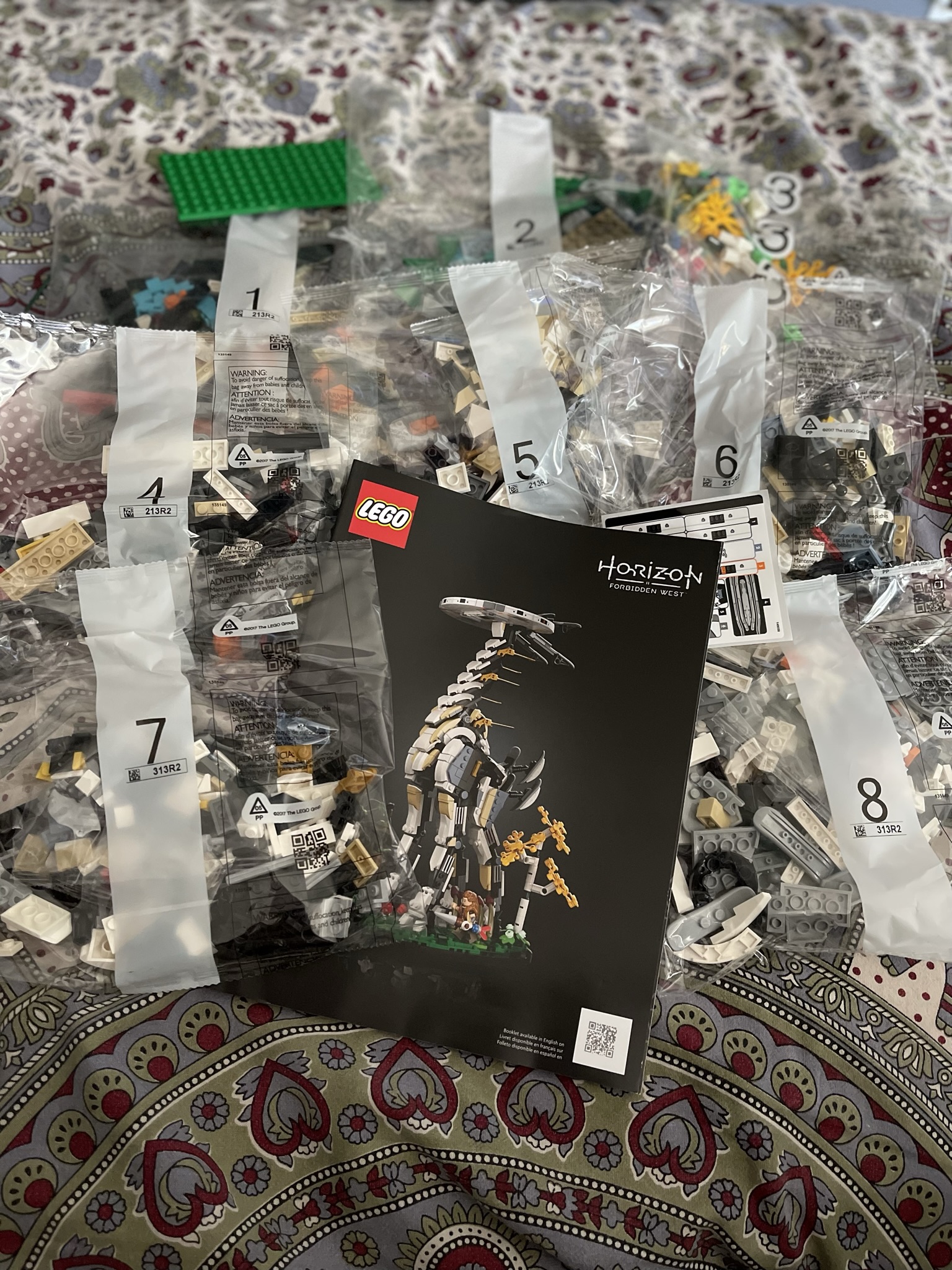 Opening the box, you’re presented with a 1,222-piece Lego set to build. The box contains the model of course, but what I was surprised to find inside is the included manual that not only introduces the Lego designer who developed the set (Isaac Snyder) but a wealth of information about the series from Guerilla including a breakdown on Aloy, what happened to leave the world in a dismal state, information on the Tallneck’s role. It certainly is worth reading the manual before diving in for fans and newcomers. 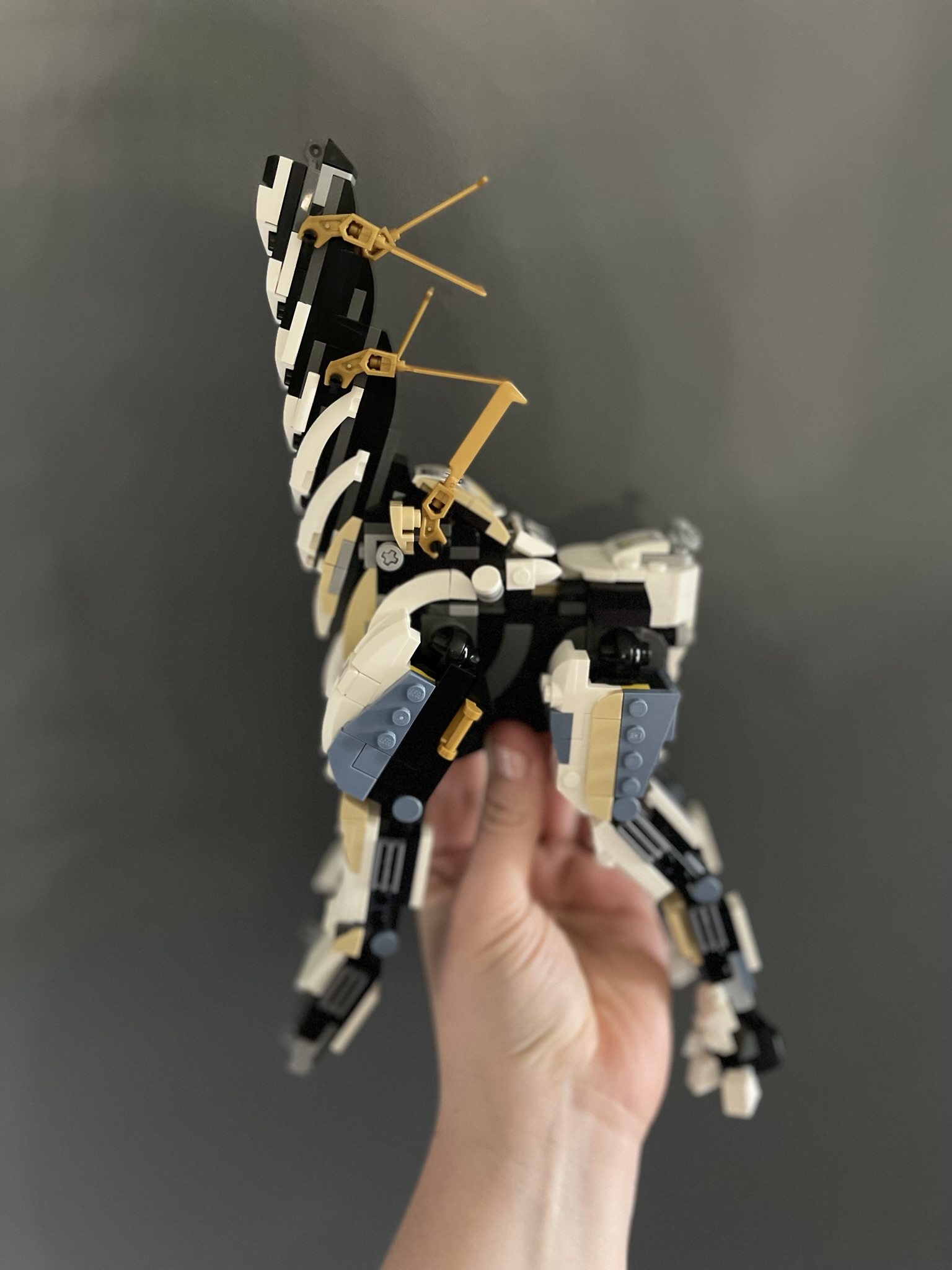 In total, there are eight bags, each one individually numbered to make assembly easy. The process to build a Lego model is generally well-thought-out and I feel just about anyone can do it given the opportunity. It’s also a nice way to spend an afternoon or two — going through the bags, seeing what’s inside and working through the pieces by building the base of the model and working your way upwards.

Guerrilla’s choice of animals players are bound to discover in-game was always a highlight for me. Over the last several years, the designs have impressed players and continue to do so. The mix of organics and machines is inspired as every design while outlandish, is within the realm of believability.

The base itself features some fauna to show builders how the world has begun to repair itself with greenery beginning to overtake the cement and mortar humans used to build society. Vines wrapping around traffic lights, a bit of the desert at the base of the model and remnants of a world once forgotten fall to the wayside leaving the stage to the real star — the Tallneck.

Every piece of this model feels thought out and emulates the look and feel of the machines in Horizon. With each Lego bag being completed, it feels incredible to see the Tallneck begin to come together. Without the base, I don’t believe the Tallneck would be able to stand out but with the included stickers and colourful bricks, it’s hard not to look at the completed set and say, “neat!” 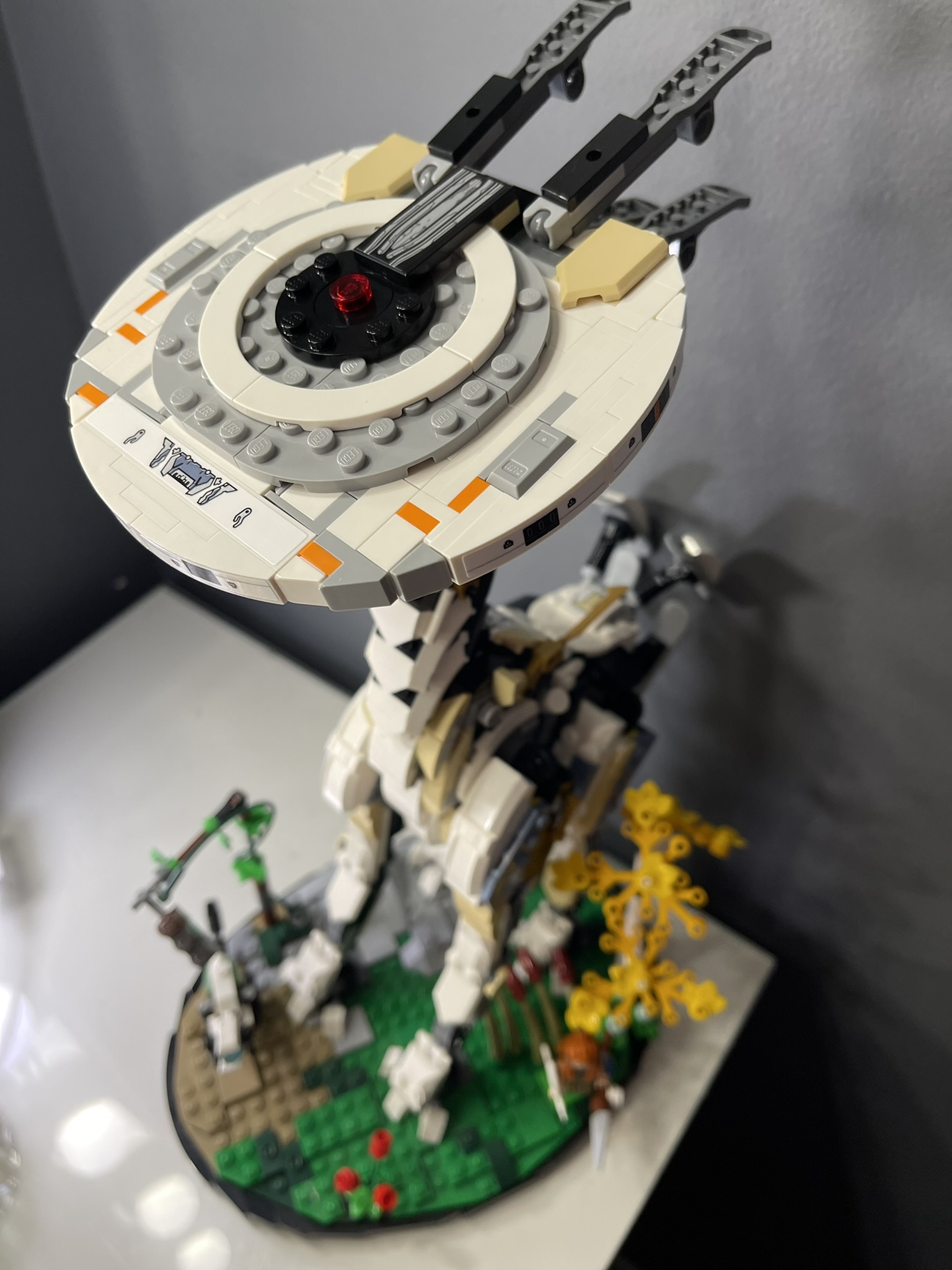 When the model is finished and you’re ready to display it on your shelf, the Tellneck stands 34cm (13.5 inches) high and commands attention wherever you decide to display it. While it isn’t as colourful as the base it is built on, the colours work well together offering a mix of blue, black, white, and gold. However, if you look closely the base includes a Watcher, the machine used to alert the bigger, volatile enemies to Aloy’s presence.

As the Tallneck began to piece together, it was hard not to get excited by seeing the product come to life. The familiar platforming mechanics I’ve grown accustomed to with each game are right there in front of me. Once you attach the head to the body does the wave of satisfaction roll over you, giving you a design that isn’t overly difficult to build. Getting up close with one of my favourite machines from Horizon Zero Dawn is a nice little bonus. 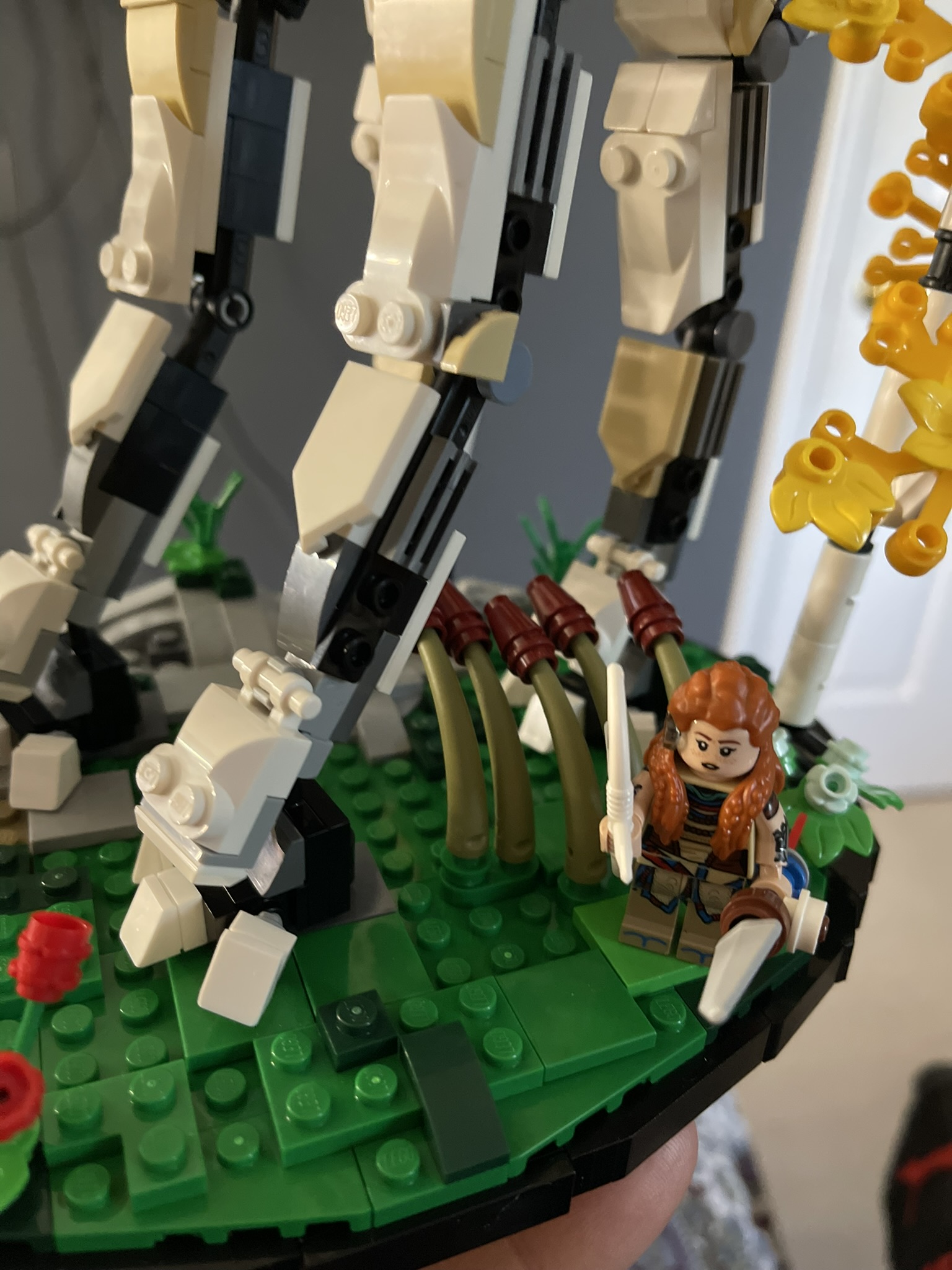 The Minifig is a nice representation of Aloy, the protagonist of both Horizon games. From the fiery red hair to the smirk Aloy loves to use in a given situation, you’ll know it’s her from the moment you set eyes on her. She wears one of the outfits from the game with familiar elements including the tribal beads she wears on her clothing. What I like most though is how the hair works to make Aloy stand apart. I expected a plastic hairpiece but what was in the box was a mix of rubber and plastic with a nice little touch showcasing the Focus she wears in-game. 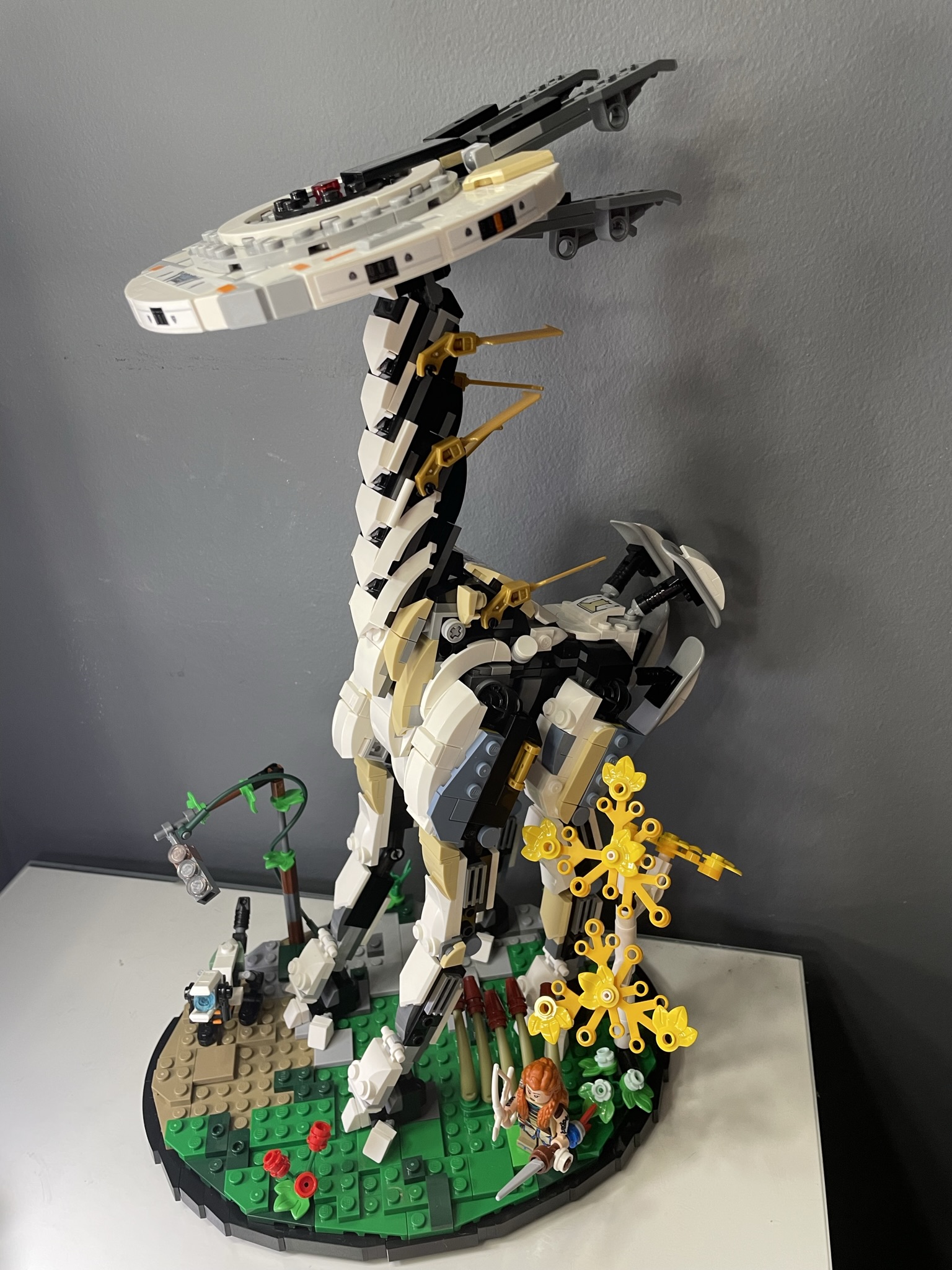 I spent a total of nine hours over two weekends building the Tallneck model. I was able to complete the first four bags in one weekend but was unfortunate enough to mess up one build. I began my second-weekend redoing bag four and went right up until the end of bag eight. Building Lego is a great activity with a friend or partner and I wholly recommend doing it with a second set of eyes and hands.

With each Lego set that I build, I appreciate why so many people have fallen in love with these sets over the years. As a child, I couldn’t be bothered to ever play with Lego, I was too busy focused on action figures and riding my bike. As an adult, the ability to set aside time and peacefully build these stunning models from across the pop culture space or one of the Lego original models boils down to being cathartic after a long, busy work week. I’ve found a new hobby that I appreciate. Fans of both Horizon games will get the most out of this but I reckon those who aren’t familiar will find the Tallneck design to be worth picking up.

You can pick up the Tallneck model for $99 CAD on the Lego Store.

A promotional Lego Horizon Forbidden West was provided for this review.