What if I told you there was a game that brought together all your favourite fandoms and characters into one epic story… and EVERYTHING in the game’s world is made out of LEGO? Sound amazing? Well, that’s exactly what LEGO Dimensions is all about, my friends!

With the LEGO Dimensions Starter Pack, players are able to join LEGO Batman, Gandalf (LEGO Lord of the Rings) and Wyldstyle (the LEGO Movie) on an epic quest to save their friends, and restore balance to the LEGO universe! The three heroes are pulled into several LEGO worlds to locate missing portal key pieces, in order to save the LEGO universe from being taken over by the evil Lord Vortech!

Right off the bat, players become immersed in the game by preparing and building the LEGO portion of portal. It’s not a requirement, since you can use the base of the portal to play the game, and the rest is decoration, but its still a really fun addition to the game; not to mention, its fun getting your family involved in building it too! An on-screen booklet was also displayed to help you step by step with the portal’s building process, and they also appeared when building the LEGO Batmobile! I have to say, unlike other games that require portals, this has been the ONLY game I have played that actually allows you to use the portal to help your characters solve problems within the game. To fight some of the enemies, you’d be given puzzles that resemble the shape of the portal and its three sections. You’d have to teleport or locate the ink that would give you the right colour, and match it to the puzzle’s pattern by moving a selected character to the corresponding spot on the actual portal. You are also given physical portal key pieces that can be attached to the front of your portal, as you go along and locate them within each of the game’s levels. Needless to say, it was really impressive with how they designed the portal and created it to be a useful tool! Another thing that was really exciting about this game for me was the variety of characters and worlds, and how they all came together to make everything fit! I was really excited when we first started off in the world of LEGO Wizard of Oz (its my favorite movie!), but what really excited me was when we came across the Twelfth Doctor (Doctor Who)! I don’t think I have squealed that much from playing a game, in a long time! Not to mention, it seemed quite plausible that he would be there, floating around in the LEGO Dimensions universe; he is the Doctor, after all! The Doctor aside, it was a lot of fun getting to try out the three different starter characters, and having to utilize their unique special abilities. The great thing, like all other LEGO game titles, is the fact that you were required to use all three characters in order to proceed, which I liked, since there are some games that would let you use whoever you wanted, leaving the others undiscovered, and played with less often than the favourite one. And like other LEGO titles, there are also other sections of the game that can only be accessed and unlocked by using other characters with the required, specific abilities needed to open the area. I ended up purchasing the Portal pack (which comes with a Chell minifigure, a Turret, and a Companion Cube figure) in order to unlock some of the areas that required her specialties, and of course, because it was Portal related… who wouldn’t’ want to see LEGO GLaDOS?! I won’t spoil anything, but Portal fans… let’s just say, you need to play the main story line within the Starter Pack… you wont be disappointed!

Included with the three minifigures was a LEGO Batmobile. At first I figured, “oh cool, they give you a car, just in case you get tired of walking”, but that was not at all the case! I ended up using the Batmobile (other vehicles available to purchase have the same function) for puzzles, and taking on enemies! You would have to use it on these speed pads to launch the car into enemies, turn on machines, etc. It was a really clever way to utilize the Batmobile, and gave it more appeal than just using it to drive your figures around. Another really AWESOME aspect to this game was the voice acting! There were SO many familiar, celebrity voices featured within the game, like Michael J. Fox as Marty McFly (Back to the Future), Peter Capaldi as the Twelfth Doctor (Doctor Who), Allison Brie as UniKitty (the LEGO Movie), Chris Prat as his characters Owen Grady (Jurassic World) and Emmett (the LEGO Movie), Orlando Bloom as Legolas (Lord of the Rings), Elizabeth Banks as WyldStlye (the LEGO Movie), Bill Murray as Dr. Peter Venkman (Ghostbusters), Gary Oldman as Lord Vortech, oh my god, I could go on for days… seriously though, check out the entire cast list on the game’s IMDb, it’s really impressive!

Overall, I’d have to say that LEGO Dimensions was really quite impressive, so much so, that I had to beat the main story line of the game within days of receiving it! One of the most rewarding things about this game was the fact that, unlike the amiibos (Nintendo), Skylanders, and Disney Infinity figures, I actually got to build my characters AND the LEGO portion of the portal, which really made me feel like I was immersed into the game! However, like the other titles that require figures and sets, this could pose as a problem to players (and parents) and their wallets. The Portal pack separately was about $30.00, and only came with the three minifigures, so you can imagine how much it cost if you needed certain characters to unlock the special areas. The minifigures are really cool, but after paying about $110.00 for the game (the Starter Pack) itself, it really adds up… Cost aside, its an amazing game, and it will definitely tug on those nostalgia strings! Right in the childhood!

The LEGO Dimensions Starter Pack is available now for $109.99, for the PlayStation 4, Xbox One, WiiU, PlayStation 3, and the Xbox 360! Various character packs are being released in waves, with some available now, and prices range from $15.00-$30.00. 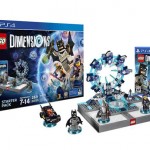