When we last left off with the Kingdom Hearts series, years of plotlines began wrapping up, while new threads spun their tales. Since kicking off the partnership between Disney and Square Enix in 2002, the series has sold millions of copies while at the same time confusing fans thanks to some baffling game titles that sound like they came out of name generator.

Over two decades while the names have gotten weirder, the music has been consistently excellent thanks to Yoko Shimomura, the composer of the series. Her body of work is expansive but she’s most known for her contributions to the Kingdom Hearts series, and even years later, hearing strings of Dearly Beloved still tug at my heartstrings. It’s a testament to how beautiful and how important music is to a project and Kingdom Hearts: Melody of Memory draws from a wealth of tracks to celebrate the series over the last two decades.

Kingdom Hearts: The Story so Far

Kingdom Hearts: Melody of Memory continues from the end of Kingdom Hearts III. If you need a refresher, Sora is missing after sacrificing to save Kairi and his friends are now left scattering to find any clues to his whereabouts. Which is why we see so many familiar places and faces as Kairi works through her memories. This all happens in the World Tour Mode, which gives us control of various characters around the series who embark throughout the world of light.

Don’t expect to go in and play this like a standard Kingdom Hearts title, this is a rhythm game spanning two decades of music. The melody of Memory is a great starting point for fans of the series and newcomers alike to jump in. I say that because the development team built this experience as a way to look back on the two decades of stories and for newcomers to learn about all that they’ve missed. Gameplay consists of three characters on the screen moving throughout the level. When you enter a given world, the notes will flow down the screen and your objective is to press the corresponding button in time to the rhythm. Depending on your timing, you’ll be scored either Excellent, Good, or Miss, so keeping in tune and ensuring your attention is centred is crucial to success and earning a high grade.

Primarily you’ll play as Sora who moves towards the end of the level, along the way Sora jumps, attacks and glides through a series of enemies. It’s a rather simple mechanic that’s the only task is to get your fingers moving to the music. You’ll also be able to summon, use items, but they’re not of consequence. Levels are split into three categories – Field, Memory, and Boss serve up the bulk of the experience. Field, for example, Sora follows a set path defeating standard enemies. Memory Dive, you’ll follow the rhythm of iconic music to unforgettable cutscenes from across the series. Boss Battle put the team against bosses while matching the notes on screen but there’s less than a handful and it’s a shame because they were so engaging for me.

I wanna line the pieces up—yours and mine.

Playing on harder difficulties is where the fun picks up and my recommendation is attempting Hard or Proud mode to see how you do. And to add some replayability for your money, each song is available in World Tour, Track Selection, and Co-op but songs do need to be completed within the story before you can consider playing them freely. I didn’t get much time with the Online Versus mode and I’ll be testing it out over the next few days, but the idea is matching with someone online and doing your best to obstruct your opponent’s view using Tricks. If you want to play with a local friend, there’s also a local multiplayer which is the same as Online Versus.

And if you’re a collectible aficionado, Kingdom Hearts: Melody of Memory offers several collectibles. There’s a Moogle Shop where you synthesize collectible cards, items for battles, and even music to unlock. I found it odd though that the exclusive songs you earn through the Moogle Shop are not available for use in other game modes.

Kingdom Hearts: Melody of Memory serves as a good jumping point for newcomers looking to catch up or veterans looking for a brush-up in lore. The real star of this game is the music and for good reason, it’s a wide body of Yoko Shimomura’s work for a series that isn’t afraid to get weird. Offering a breadth of music to experience interactively yields some great results, the sheer volume of songs available makes this worth it alone. However, if you want to learn what happens after Kingdom Hearts III, don’t expect to know until much later in the Melody of Memory. 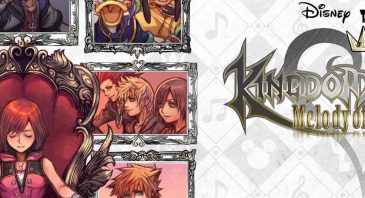 Deathloop’s New Launch Date is in May 2021