We’ve all come to a point in our lives where we’ve done something so many times that it becomes unfathomable that we’ll be able to change it up.

This is something that Ubisoft has struggled with in the past as a collective of worldwide game studios.

Speaking of top to bottom, this new DLC takes place from the perspective of Fenyx watching her new champion Ash in a top-down “God’s Eye” perspective.

While this new view doesn’t necessarily flip game mechanics on their heads, it does add a fresh style to things. 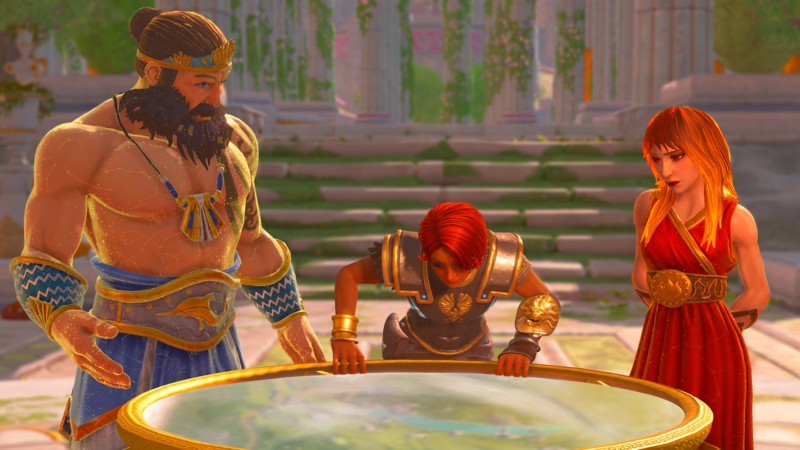 My only complaints arise from a handful of enemy types that exploit the limitations of the camera. Enemies like the annoyingly flighty harpies will slide out of sight constantly. Chimeras will jump outside of your field of vision to lob fireballs at you. To their credit, Ubisoft Quebec uses the base game’s vision markers to alert you when an unseen enemy or attack is heading for you, but I still found it disorienting.

I also find the way the map is laid out to be a little disorienting. It very much feels like the previous maps in the base game and DLC. However, Ubisoft Quebec has shifted focus from set-pieces and cartoonish horizons to environmental barriers like mountains and crevasses. Pyrite Island, another creation of Daedalus, feels empty and uninspired at times.

From Fenyx to Ash

Immortals Fenyx Rising: The Lost Gods features a new story that takes place shortly after Fenyx’s defeat of Typhon and their invitation to Olympos.

The more major members of the Greek Pantheon are locked in a heated disagreement, leading to the differences of a handful of gods needed in the hall of the gods.

With members of the Pantheon AWOL, the world is going through catastrophic events like earthquakes and floods.

Fenyx is eager to jump back in and save the day again. However, they receive a visit from Athena, who informs them that gods cannot interfere. This time, they will need to pick a champion. Enter Ash, orphaned daughter of some master potters. She (female only) is selected by Fenyx because of her devotion to the new god. But she needs a lot of help!

A minor problem I had with the previous instalment, Immortals Fenyx Rising: Myths of the Eastern Realms was how its characters felt unconnected and uninspired when compared to the cast from the base game.

Ubisoft Quebec has stunningly returned to form with this new story.

Fenyx and island guide Owlthena (Athena presenting to Ash as a wise owl) drop sarcastic quips about feuds between them reminiscent of Zeus and Prometheus.

The star of the show is the bond between Fenyx and Ash. It was not so long ago that Fenyx four themselves in Ash’s place, so they are sympathetic — a trait they definitely lacked in the base game.

Fenyx is also adjusting to being a god and the limitations that come with that. So there’s an endearing duality to how Fenyx and Ash help one another learn the ropes.

Finally, the cast of Pantheon personas you meet along the way expertly use each god’s personality profile as a reason they are missing and a hangup that you must help them with.

If you’ve ever read any Greek mythology, you’ll know that gods represent the best and the worst of our being. Ubisoft Quebec has taken these traits and expertly crafted their story from them.

Water, Earth, Fire, Air. These are the Elements That Makeup a new Game

Immortals Fenyx Rising: The Lost Gods is made mechanically richer by all of the new elements of gameplay that it has.

The first is an elemental system. Your combat skills and god powers are now enhanced by a new system of buff tiles that allow you to get extremely focused when it comes to character building.

Ash possesses the same weapons and god powers that Ku and Fenyx had before her. But Ash can unlock the favour of certain gods who will grant her thing like combo chains, added skill buffs like greater attack power and defence bonuses, and even greater health and stamina boost. These options are achieved by looting materials off of corpses or the landscape and presenting them at alters. You’ll also earn element tiles on your adventure that allow those god favours to grant you things like the ability to increase health or stamina, the ability to steal life from opponents when you launch certain skills or increase stamina to attack for greater periods of time or use more god skills. 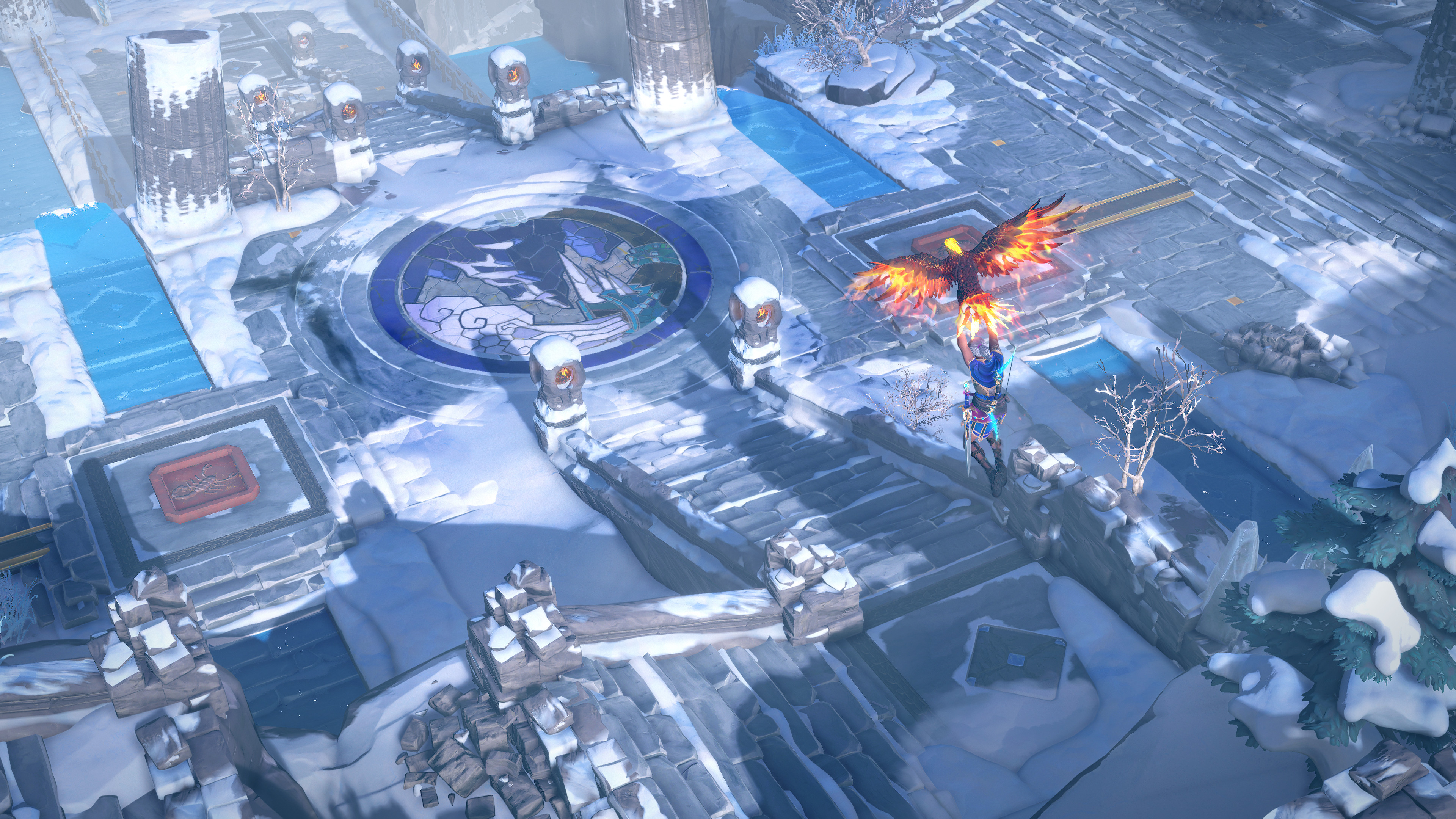 This new focus on skills and god powers adds so much depth to an already amazing customization system. I started out building Ash to be a hard-hitting axe user who has the health to match. As I progressed, I realized that my stock stamina levels meant that I was falling behind both in exploration and ability to fight. That needed to be rectified with the use of more elemental tiles.

Keeping up With the Curve

One thing I’ve very clearly noticed in my time with Immortals Fenyx Rising: The Lost Gods is the very real difficulty curve present here that was missing from iterations up until now (base game final boss not included). Encounters with baddies now take place in waves where you tear through the creatures of myth, but they quickly come in numbers and increased strength to overwhelm you.

As you succeed in battle, there’s a great reward of feeling the growing godly strength of Ash that comes from the new skills and power system.

While weapon categories stay the same with your sword axe and bow, the later weapon has become an unlimited point-and-shoot weapon making it, in my opinion, harder to use than in the base game. However, I imagine there are going to be fans of this arrow-launching overhaul. 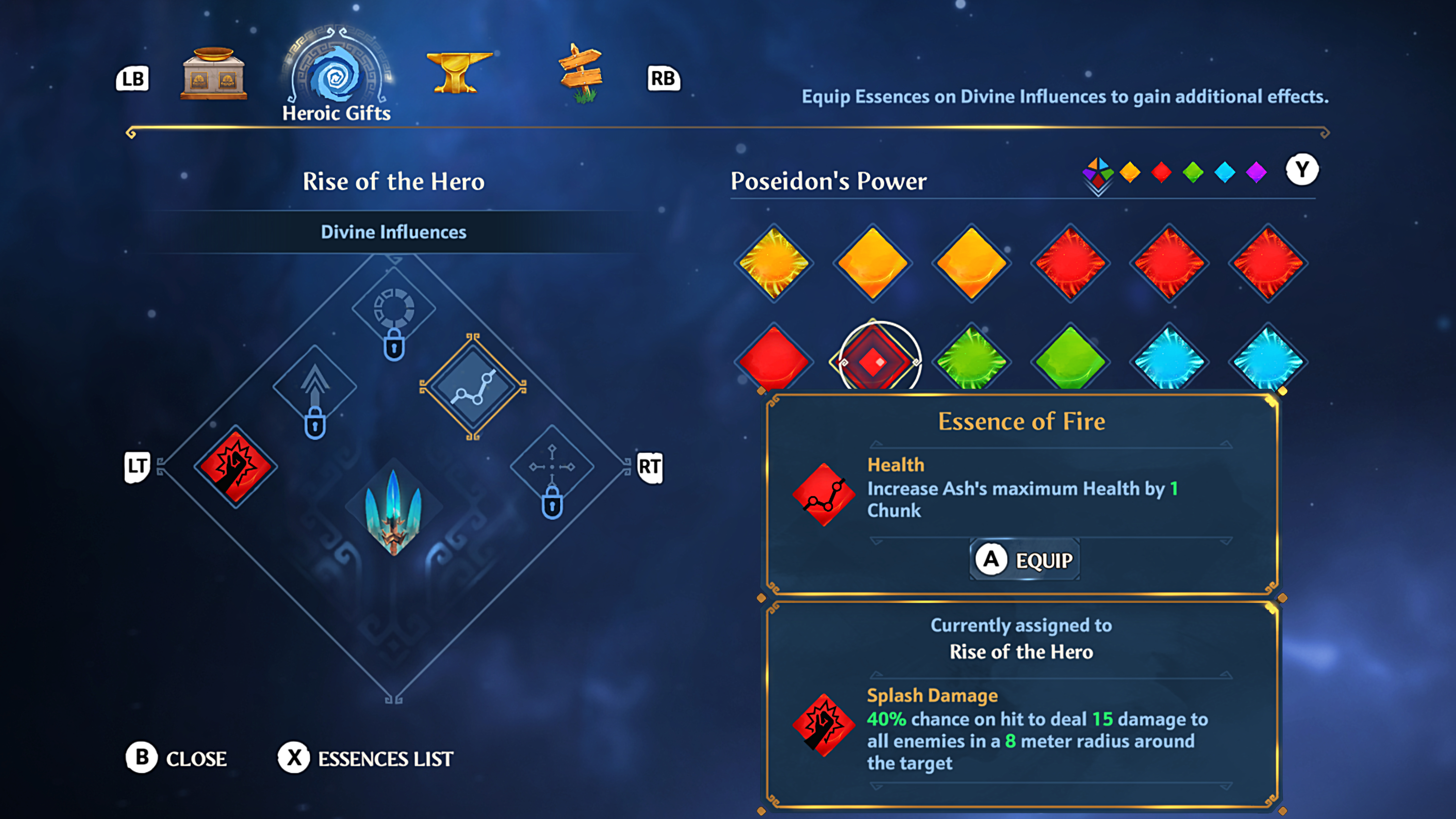 There are also additions of traditional RPG elements that have been added that I have no problem with but likely won’t be for everyone. Things like the ability to only save and fully recover health at the alters. Most story progression points are hidden behind the need to pray to receive a blessing to help build a bridge or clear a swamp of poison. The blessings require that you collect several specific goods from battle or foraging.

Speaking of which, Ash now has more things like the ability to save and the ability to hone her skills hidden behind a fairly chunky level of grinding and foraging. Once again, I have no problem with this, but it won’t be for everyone.

In case you can’t tell, I’m a total fan of Immortals Fenyx Rising: The Lost Gods. I’m enamoured with the way that Ubisoft Quebec has made an addition to the Immortals IP that feels both fresh and familiar. I realize that this is going to be a divisive title as it presents more as a traditional top-down RPG than the sandbox physics engines we’ve gotten from Immortals up to this point. But I will happily play another DLC or full game like this in the future. Well done!