Ubisoft, we need to talk about Myths of the Eastern Realms!

I’m more than just a little upset with your latest piece of downloadable content for the surprisingly-enjoyable, out-of-nowhere Immortals Fenyx Rising. You’ve got to stop simply reskinning things and calling it DLC! Those days are behind you! I find myself hung-up on the fact that this game really could have been something much more substantial if given a year or two to become its own IP. I really wish Ubisoft Chengdu was given the opportunity to make something more than this shoehorned DLC package.

Condensed Chronicles of the East

Now, I’ve opened this review quite condescendingly. And I want to take a moment to say that I don’t hate Myths of the Eastern Realms. In fact, there’s a lot I like about the eight-to-ten-hour condensed epic. I like that I don’t have to waste my time collecting powers. I was happy to spend 20 hours building Fenyx into a brand new Greek god. But it’s also nice to feel powerful from the beginning of my adventure. It makes me feel as though I can traverse Myths of the Eastern Realms without the same need for farming I’ve felt in other sandbox RPGs of late, Immortals Fenyx Rising included in that list.  Likewise, I love the way the world feels more tightly woven together so that instead of finding myself daunted with having to travel around and achieve everything, I instead feel ore motivated to finish the tasks nearby.

What is Ku to do?

The story was a spot where the base Immortals Fenyx Rising got to shine. For such a generic-sounding game, it became a quirky and enjoyable title that dazzled with a cheesy yet hilarious tale told between Zeus and Prometheus, but also through Fenyx and Hermes. The relationships between these core characters and the gods that Fenyx met through their quest were playful and endearing. A lot of that is lost with the new protagonist Ku, who has far too much of a childhood hero complex. And it ruins his ability to be a compelling main character. Especially when it comes to his ability to interact with Nuwa and Gong Gong, the game’s gods of choice. 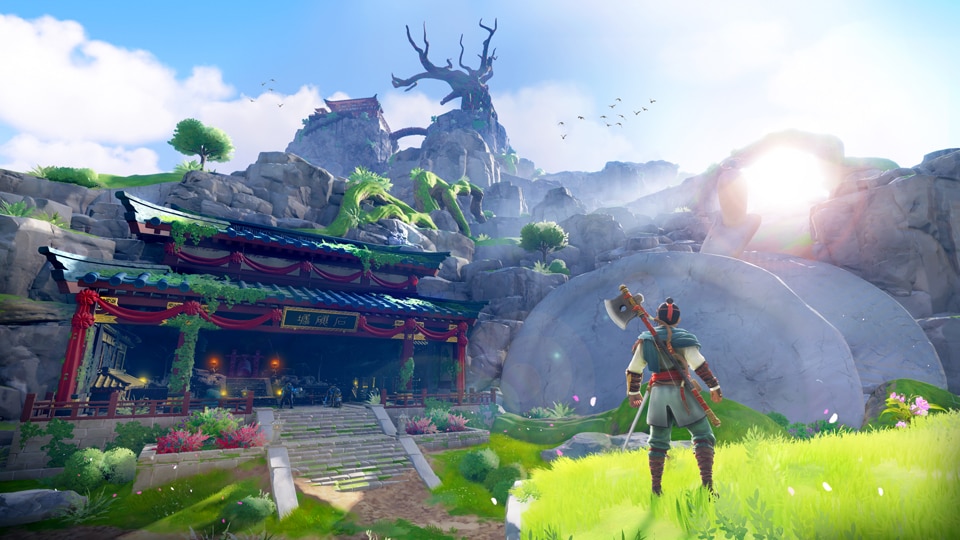 Speaking of complex, that is something the overall story here is not. Ku wakes up in a cave where he discovers he is the only person not turned to a terracotta-like stone in the Mortal Lands, consisting of grassy lands of Peng Lai and the cold mountain volcano of Bu Zhou. Ku is as as strong as Fenyx, having possession of several skills including his powerful god skills(which are reskinned from the same ones Fenyx worked hard to acquire). He quickly learns that Bu Zhou has erupted as part of an event called the Scar. The Scar has released a dark and evil force bent on destroying the Lands of Heaven.

One of the things I love about Immortals Fenyx Rising is the heart and levity characters possess. Zeus and Prometheus share a lovable bond of knowing and understanding that plays off the best and worst parts of both  Fenyx and Hermes have a hilariously dysfunctional partnership where Hermes’ penchant for tricks and Fenyx’s willingness to follow along create real strife. Ku does not share this with his guide, the goddess Nuwa. The relationship between the two feels uneasy as Nuwa spends most of her time feeling guilty for putting Ku in danger. And Ku runs around the Mortal Lands geeking out on his ability to be seen as a hero. What results is a relationship that feels forced and awkward. There’s a distinct lack of levity and heart between the two. I think this is best amplified by a point where I came across the World Turtle’s shell. It’s the rocky home of a grand sea turtle who Nuwa cut the legs off of in order to help support the world after Bu Zhou was damaged and the heavens were left unsupported. Ku comments on how the turtle looks dead leading Nuwa to rebut that whomever killed it probably had a real reason to use the legs, and that she must go now. In that moment, I found myself not entertained and confused by a feeling of disconnected humour. The relationship between Ku and Nuwa also feels like that of Pit and Palutena in Kid Icarus: Uprising in that it involves a lot of back and forth discussion on things Ku should and shouldn’t do, like say adventuring the the left over remains of a dead dragon. But it usually ends in Nuwa admitting that she was wrong, and Ku actual helped things out. I never could grow to love the way Pit and Palutena bantered because it always felt disjointed to me. I feel much the same with this relationship. If I were given the ability to make narrative changes, I would make the relationship feel more as that of a chosen hero type where Nuwa leans more on Ku instead of trying to force him to sit down and wait for her to sort things out, only to grow excited when Ku shows he can be a hero.

The relationship between Gong Gong and Ku isn’t much better. Gong Gong is the last member of a warrior family of fire lords vowed to fight Heaven called the Yan Di clan. He is also the laziest of them all, despite u having been lead to believe that he is a fierce warrior. Ku often tries to impress Gong Gong through showing his own battle abilities, and Gong Gong simply lets them slide right over his head.  It’s less annoying them his relationship with Nuwa, but not by much.

We’ve been here before: 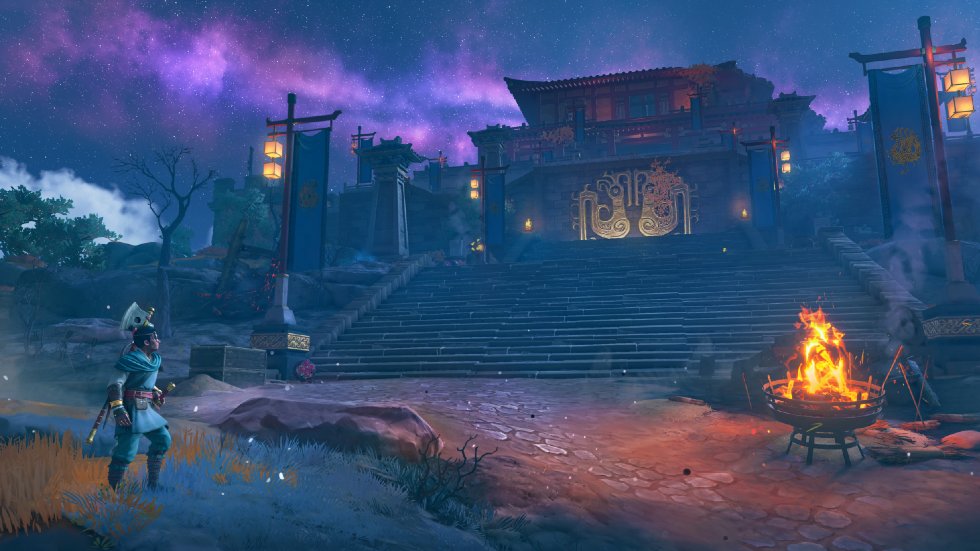 The Mortal Lands, of which there are two separate isles are very hard to distinguish from the Golden Isles of the base game. Sure, there’s now grand Chinese halls, towering pagodas and bright Heaven’s Gates now. But they once again feel like reskins put into the world to alter you perception. Only they feel far too similar. There are moments you will find topography reminiscent of Chinese visual art such as impossibly rigid mountains and airy lands in the clouds, but  I often found myself flying over the map wondering how it would look with the Greek building of the base game instead? The answer is quite the same.

As I’ve mentioned above, I’m a fan of how things feel closer together in Myths of the Eastern Realms.

Perhaps the most uncomfortable aspect of Myths of the Eastern Realms is the reskining of enemies. There’s really no new baddies here and when you pair that with Ku’s style of fighting that’s equal to Fenyx’s, you end up with an unsatisfying combat system where what was previously enjoyable feels tired. I wish Ubisoft would have spent more time thinking about how enemies present a challenge. It’s something that they’ve struggled with in the past by adding bullet sponges in every co-op fight simulator game like The Division 2 and Tom Clancy’s Ghost Recon Breakpoint, or the way that Assassin’s Creed games became worlds populated with the same foot soldiers, heavy scrappers and snipers. It’s something that series actually did a great job of rectifying in the latest instalment with a new breadth of enemies that had surprising new skills like the ability to throw banners at you or pick up weapons from the fallen and switch up their fighting style. They also added real tactical patterns for base enemies all the way up to tankish zealots, which makes for engaging combat. I wish Myths of the Eastern Realms was given an opportunity to find some enemies of its own creation. You will very quickly fall back into the familiar dance that is Myths of the Eastern Realms‘ battle system. While the overall quality of life is now improved by a combo marker that shows you how much extra god power damage you’ve saved up is present along with a better UI for showing things on-map and on-screen, not enough feels truly different to necessitate either. However, this is a great addition for cognitive accessibility, so I was happy to see this.

Another similarity to the base game that has me hung-up are puzzles. There are new forms of dungeon puzzles in the form of Heavenly Ruins, which are much brighter than their counterparts. They are more focused on acts of combat and platforming skill this time around, which is a great addition to the base game’s brain teasers, but like so much else in this game, they don’t feel all that different. Bagua puzzles replace the Constellation puzzles and take place in lore-rich areas of the map much the same way they did in the base games. They are almost identical to the older puzzles save for a lot more elements like lasers and spikes that are trying to kill you, as well as a new block that grows and shrinks as you strike it. I am enjoying solving the all of the Bagua puzzles because they not only award you with jade coins used for upgrading, but also with interesting snapshots of Chinese Mythology.

If you own the season pass for the base game, then certainly check the new downloadable content out. Immortals Fenyx Rising: Myths of the Eastern Realms is also for those who might enjoy the Chinese mythology the developers decided to implement. I wish this game was given more opportunity to breathe and to develop on its own so that matches the acclaim its base game received. Sadly, I also find myself unable to shake the feeling this is a simple reskin you’ll be no worse for skipping out on. I feel like this game may float away on a cloud of mediocrity never to be heard from again.

[A copy of the game was provided for review purposes]