Hyrule Warriors: Age of Calamity isn’t the sequel you are hoping for but it is worth checking out. The Legend of Zelda: Breath of the Wild left us with questions and news of a sequel piled on even more questions. In September, Nintendo revealed that we would find answers as they partner with Koei Tecmo once again, who previously worked on the original Hyrule Warriors.

I enjoyed the first Hyrule Warriors, much more than I’d expected. I’m not the biggest Warriors/Musou aficionado – the gameplay bores me due to the mindlessness I associate with the mechanics. I played the first game out of respect for the series but with the second game offering a look at the events that transpired 100 years before the lead up to Breath of the Wild, I knew I’d have a good time at the cost of turning off my brain a bit.

If you’ve never played Breath of the Wild, then let’s get up to speed on where the series is. Hyrule Warriors: Age of Calamity is a prequel that organically adds to the lore and world. However, this is going to divide fans because it does a few things to the established timeline and uses time travel to shift the narrative.

Without diving too far into the story, this is a prequel that starts just as King Rhoam gathers his troops to face Ganon. The littlest guardian arrives from the future, with a story of the future that’s devastated the lands and left the world in ruin. Thankfully, the narrative is beautifully told thanks to some excellent voice work, used to deliver powerful performances, the only caveat is it does take some time to get things going and when they do, things occur in unexpected ways. It’s up to Zelda to gather the Champions and find the one who wields the Legendary sword.

Gameplay in Hyrule Warriors: Age of Calamity can easily be described as chaotic. It is also mission-based chapters you’ll be dealing with to move the story along. You begin on a large battlefield that’s covered in enemies, you also have objectives and lots to do across the entire map. In most cases, you move around the map engaging enemies and, in some cases, mid-bosses. Other times you’ll be left with completing objectives before being able to proceed further. I feel that thanks to how involved Nintendo’s development team was here, the missions offer a better structure to them.

In battle, you’ll be controlling several iconic characters throughout Hyrule, working in tandem to stop Ganon’s forces from overtaking the kingdom. Starting as Link and Impa, you’ll also play as Zelda, and then the four Champions introduced in Breath of the Wild – Mipha, Daruk, Revali, and Urbosa. In battle, you’ll have a Regular attack, a Strong attack, a Special attack and also a dodge to use. You can lock onto enemies and in some cases, use Sheikah Runes when in battle to turn the tide. And at the press of the D-Pad, you can swap between your party seamlessly and instantly, giving your party the ability to deliver pronged attacks against the hordes of enemies.

Every character has their own unique abilities and skills in battle. Link is agile and you’ll use Regular attacks to whittle down mobs of enemies and pair them with Strong attacks that hit harder and incorporate character flair, showcasing each ally’s play style. In Link’s case, the familiar spin attack makes quick work of hordes. Impa singles out enemies to deliver fast, blink and you’ll miss it attacks, and Zelda hurls out projectiles.

These two attacks build the Special meter which is situated below your heart containers. As you decimate enemies, the meter builds and once filled, culminates in a devastating finisher. In some cases, if you work hard and time your dodges, your team is able to unlock flurry strikes, similar to Breath of the Wild which occurs when an enemy is stunned. It is in these moments the bigger enemies are susceptible to major damage and easier to down. 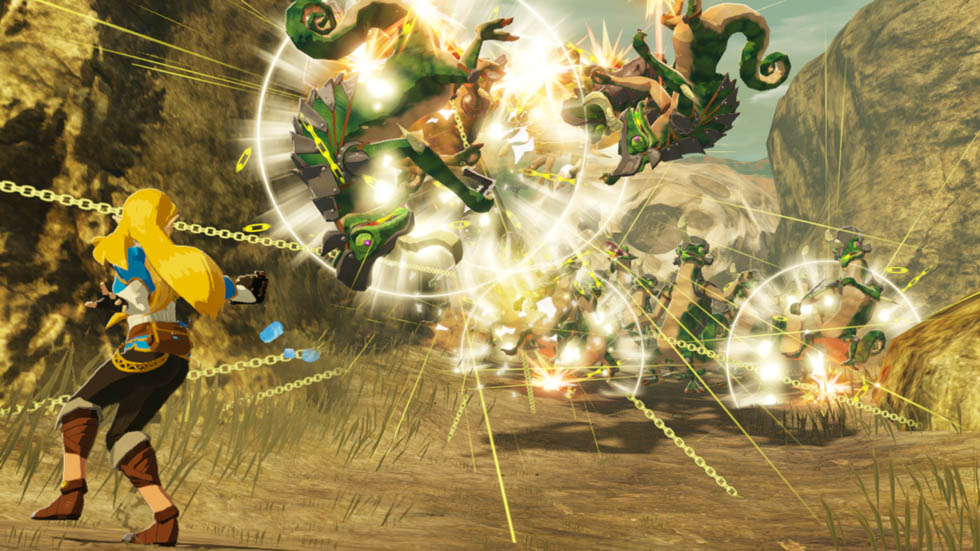 Furthermore, holding down the L button pulls up your item menu, and L and the B button together will heal your characters in battle via the various dishes you’ve prepared beforehand and also found throughout a stage.

Also, for the first time, you can use the Divine Beasts across the map of Hyrule. All four machines are yours to command in battles against hundreds of enemies. I found the gyro controls to be responsive and you’re engaging in a first-person perspective which made the experience easier than I’d image a third-person perspective to be. Basically, you use the Divine Beasts to locate enemy camps and destroy them, in some camps you’ll find machines to stop you. I’d recommend turning off the motion controls as they are a hindrance to the enjoyment here.

Unlike Breath of the Wild, the map is split across points to select from. Each point on the map features a familiar place you’ve visited before, only now it’s not ruined or an abandoned settlement. Hidden throughout each map are the ever pleasant Koroks, who offer seeds upon discovery. Also, returning to the Age of Calamity is the option to cook meals at campsites. Throughout the map, you’ll find ingredients and many dishes return but you won’t cook meals the traditional way found in Breath of the Wild.

Instead, at the start of each mission, you choose the meal you want to cook before heading into battle. I found the choice to streamline cooking since the gameplay is so frantic, the faster you find yourself back on the map, the easier it leads to progression. Meals offer the same buffs as before, some may offer more hearts, another meal might provide elemental resistance or more stamina and so on. 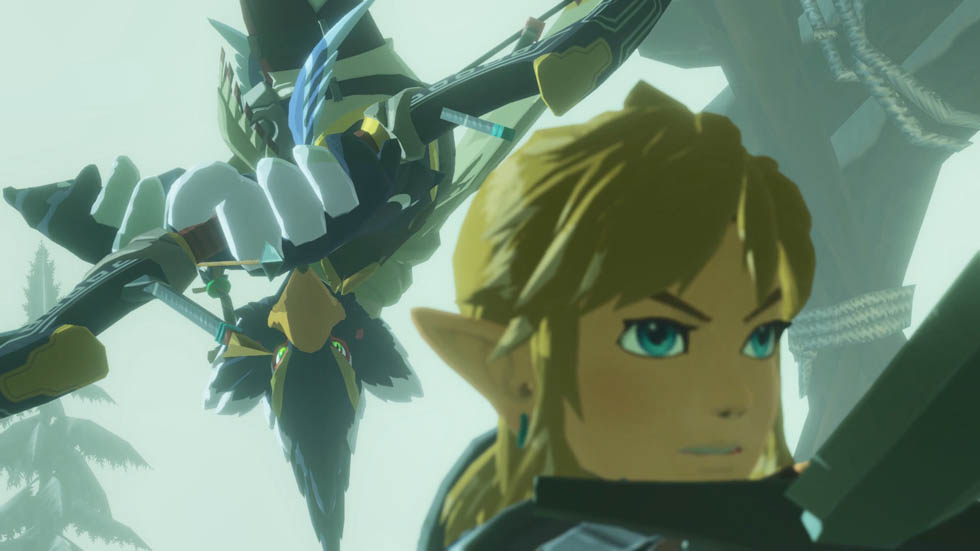 Similarly, Gear returns but without the stress of breaking this time. Characters can also change their attire in-game, which is similar to how costumes worked in the first Hyrule Warriors. Attire is only cosmetic here but it’s a great way to make each character feel like your own.

In between story missions, various points on the map offer challenges. These missions serve as a great opportunity to level up your characters and gather resources but these are heavily bloated quests.

Courage Need Not Be Remembered

Furthermore, each character has access to the various Sheikah Runes from Breath of the Wild. Cryonis, Stasis, and Magnesis. Their implementation in the Age of Calamity serves to crow control hordes of enemies. You can, for example, use Stasis to pause enemies while you build damage and send them flying into the crowd. If you use Cryo, you can freeze enemies in place and throttle them before they return to normal and even build a platform to glide from and deal damage from above. Magnesis has you hurling a massive block at enemies or slamming it down on their heads, you can even catch certain weapons and hurl them back at the enemy.

Playing the demo had me worried and the one issue I wanted to follow up with when the full game launched, centres on the framerate. With hundreds of enemies on screen and a flurry of bouts spread across Hyrule, the dip in frames can be jarring at times and pushes the Nintendo Switch to its very limits. Playing docked at home or handheld on the Switch Lite, the resolution takes a hit. And while the full game handles better than the demo, it’s still jarring to me. If anything, the long-rumoured Nintendo Switch Pro would be a welcome piece of technology to balance the gameplay’s strenuous mechanics, but it’s all speculation, right?

Hyrule Warriors: Age of Calamity may not be the sequel Nintendo fans are looking for but it’s certainly worth exploring the past to learn about the future. Age of Calamity will not please all fans of the series and will likely split the base, but it is an enjoyable game that has some issues. It’s got a great roster of characters, great combat, and some great ideas that stick the landing. At this point, I’m ready for Breath of the Wild 2 to bring us home.