Man, oh man, I love Hot Wheels Unleashed. I had a lot of fun with the Hot Wheels expansion in Forza Horizon 3 a few years back and after wrapping that content up I wondered why there was no game based on Hot Wheels. Before that, it has been years since I’d last thought of Mattel’s toys — my childhood was rife with those tiny model cars, tons of plastic pieces tucked into Rubbermaid containers. Seeing that a new game was developed by Italian developer Milestone is somewhat exciting, I generally enjoy arcade racers, and combining my childhood obsession with a video game was enough to pique my interest.

Hot Wheels Unleashed delivers a fun romp through childhood with an accessible, cleverly designed arcade racer that’ll tickle anyone’s fancy. There’s a high level of customization, gorgeous cars to collect, and tons of building tools to extend the longevity of the game. In short, the developers have a wildly engaging racer on their hands and it’s one of the best I’ve played in years.

Hot Wheels Unleashed is a fun and entertaining arcade racer

What’s impressive to me is how good visual fidelity is for the diecast cars and levels. I hate comparing it to the Forza Horizon 3 expansion but it’s a good benchmark to compare. While cars and levels were realistic, looking like body kits attached to existing cars, the cars in Hot Wheels Unleashed look more like the cars they are based on. Milestone’s done a great job at nailing the aesthetic down — something I was worried about but ended up being surprised by how much care is given to make these cars look authentic.

All in all, there are 66 unique cars available at launch including Hot Wheels Originals, Pop Culture Rides, and real brands like Audi, Ford, Honda, and Koenigsegg to name a few. Each vehicle has a rarity level, a state that revolves around the difficulty to obtain a higher-rated version with increased states. These range from common to rare to legendary and you’re able to upgrade cars by obtaining gears or dismantling vehicles.

Gears serve as currency in Hot Wheels Unleashed and can be used to upgrade cars in-game and raise stats. With the rarity system, you’re left selling cars often while working towards earning a rare or legendary car. 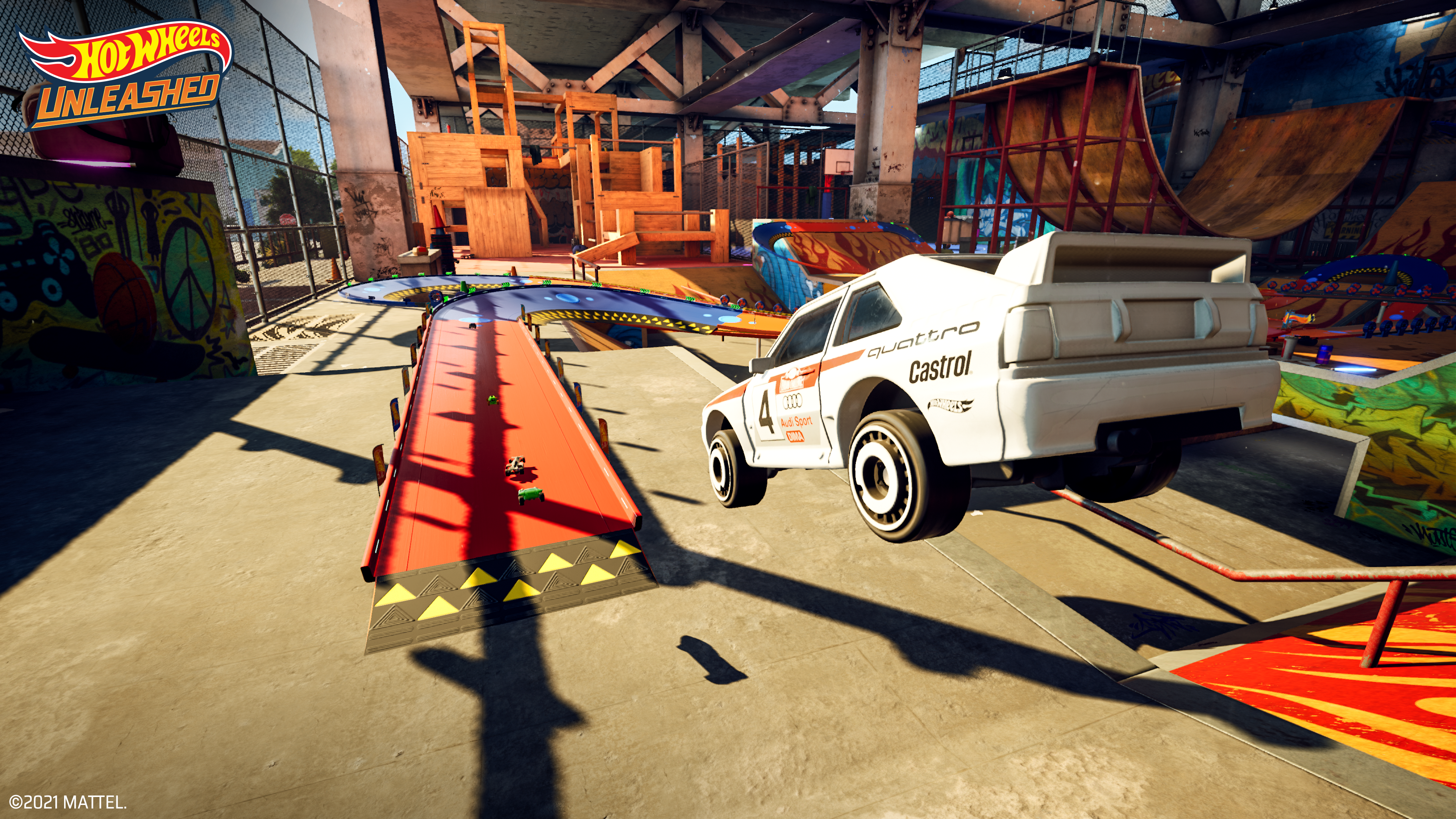 To even begin unlocking cars, you’ll need to earn loot boxes. This is where a lot of people sit on opposites sides of the discussion but Hot Wheels Unleashed does it in a way that unlocking new cars, you need to collect the pre-determined amount of coin to then roll for a random. Sure, some of the time you’re getting duplicates of cars but I never felt like the game was trying to prevent me from getting better cars.

Generally, each car drives well enough. For arcade racers, my gold standard is somewhere between Burnout Paradise and Need for Speed: Most Wanted. When driving along tracks, cars handle well, and they need to because you’re often actively working to avoid obstacles and drifting your way into a first-place finish. Handling is a huge concern in any racer and with the large offering of available cars to choose from, most of the cars I’ve taken to track have felt great to drive, the one caveat is when you’re hitting top speeds, handling goes out the window and you’re left trying not to spin-out.

With some worry for rubber-banding AI, I’m happy to report it isn’t as overbearing as it can be in other series. Maintaining the first-place spot can be stressful when you’re trying to keep the car from being sent into oblivion but paired with enemy AI that breaks enjoyment because of overpowered opponents is a game-breaker for me. That isn’t the case in Hot Wheels Unleashed where the challenging adjustment steadily increases over time. Kids will get a good sense of accomplishment completing races and buying newer cars. I did face a few instances late in-game were a mistake basically moved me from first to last but I’d picked a car that wasn’t meant for that race, and it was my need for speed that ruined my chances of winning. 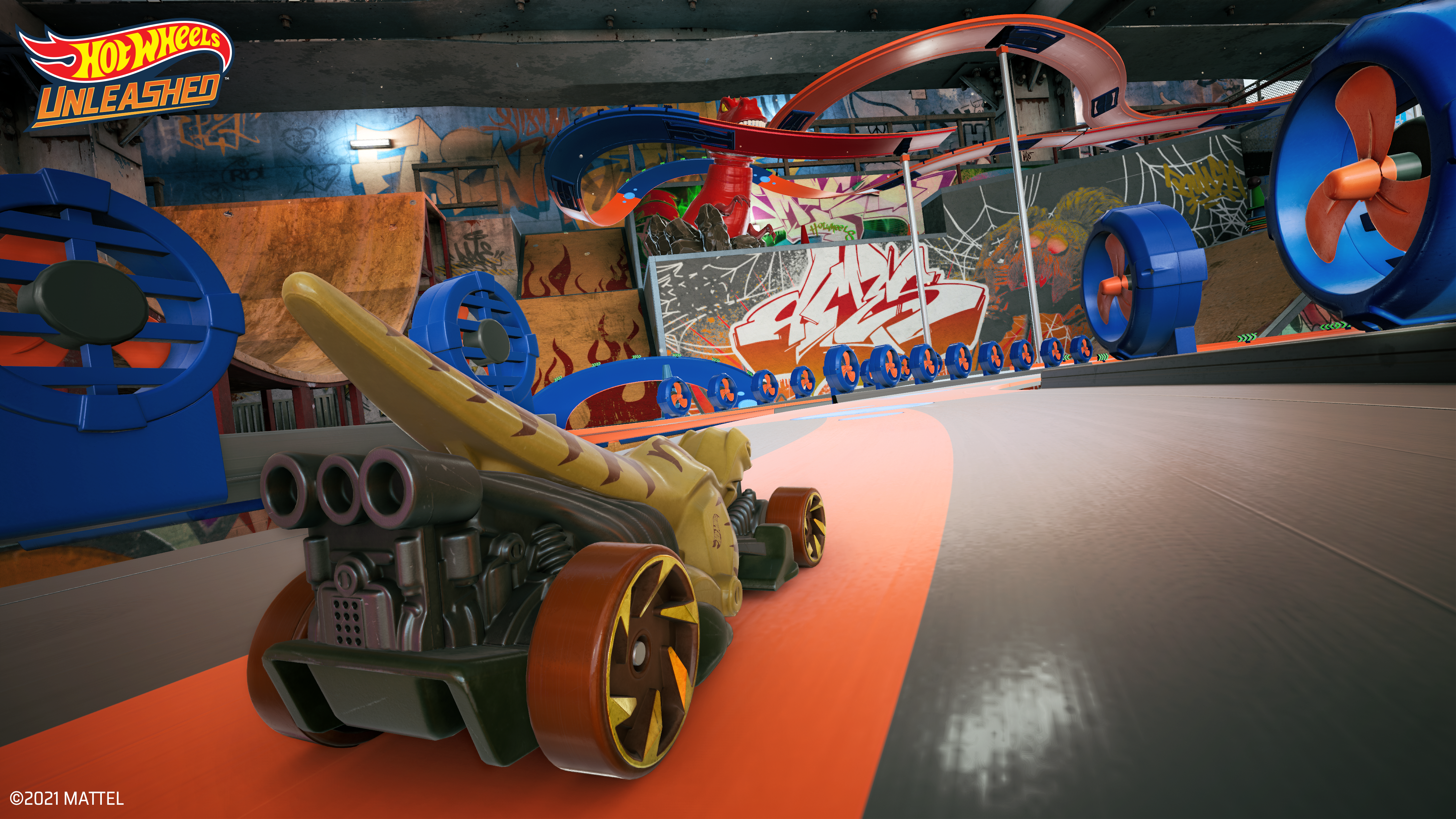 Hot Wheels Unleashed ships with six different environments — the garage, the skate park, the track room, the skyscraper, the college campus, and the basement. Serving as a customizable hub area, choosing the coloured theme save If only I had the chance to show my eight-year-old self Hot Wheel Unleashed, I know he’d be up late into the night working on track creation and unlocking the entire fleet of vehicles offered.

The main campaign is called Hot Wheels City Rumble, a single-player mode featuring an explorable world map that basically amounts to heading to the new spot, completing a race while unlocking the challenges tied to said race. You’ll be completing matches to work unlock new racetracks for both local and online play, earning gears, and unlocking the fleet of cars. 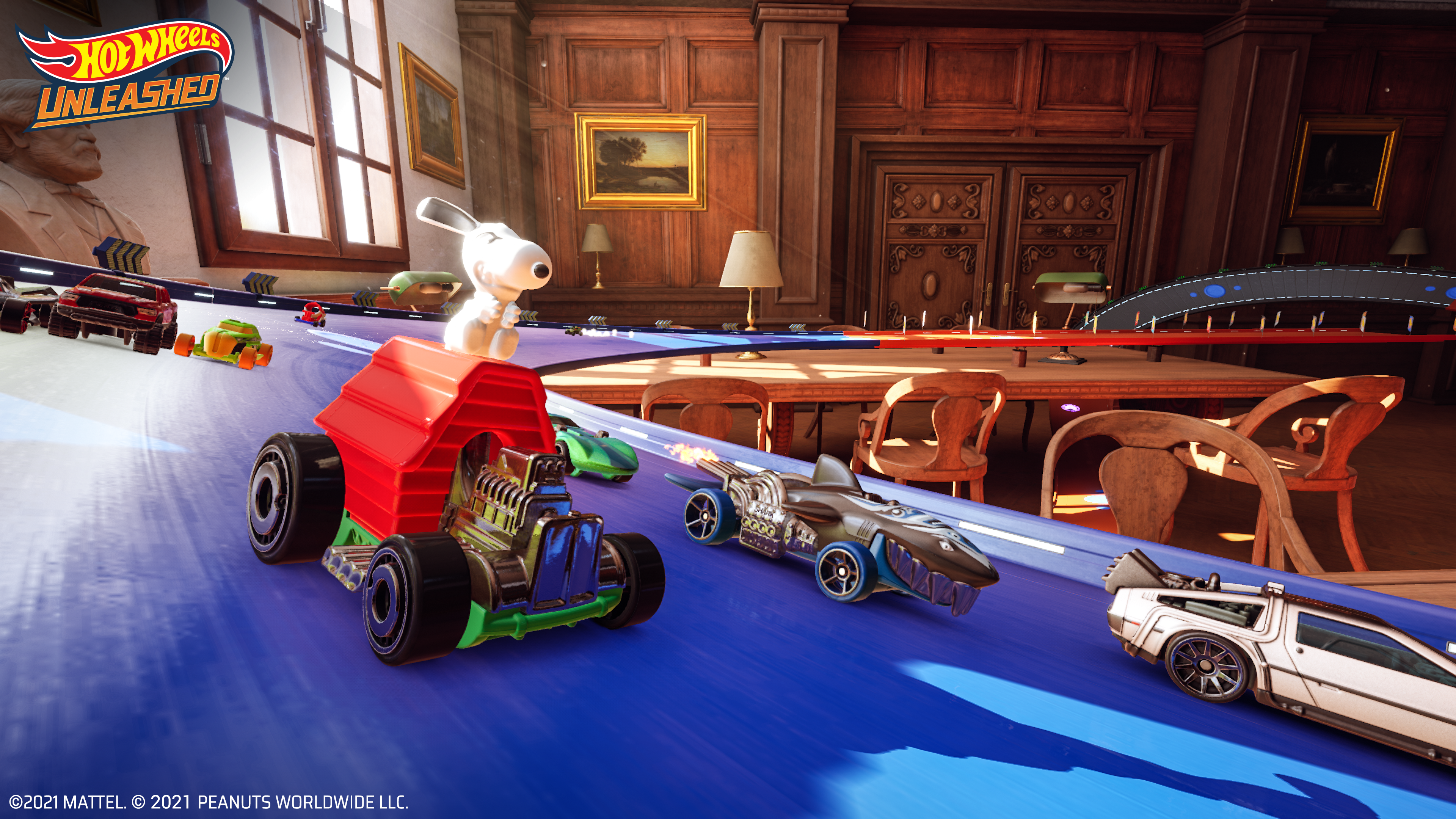 Also, unlocking the new courses spread out across the six main areas is fun but a lot of times, the obstacles are not. I despise the spider that shoots webbing at you when you’re in the middle of a race – it glues you to one spot where you can’t break out of its trap even by moving the controller or using boost. I do like how some levels feature smart shortcut placement, giving you the chance to get ahead if you focus on driving and finding the path of least resistance. If you build it, they will come

Something to pay attention to if you’re picking up Hot Wheel Unleashed is that it comes with a track builder. The deeply customizable track builder offers a lot of options to build and share your creations. Smartly being able to shorten, lengthen tracks while also being able to curve and tilt each piece to your specifications means those who love sinking into building their own levels will get a huge kick out of the track builder. While the builder has a learning curve, once you take the time to learn how each piece connects and how placement works, the fun of custom-built levels exponentially grows. I’m looking forward to seeing what players come up with in the future. 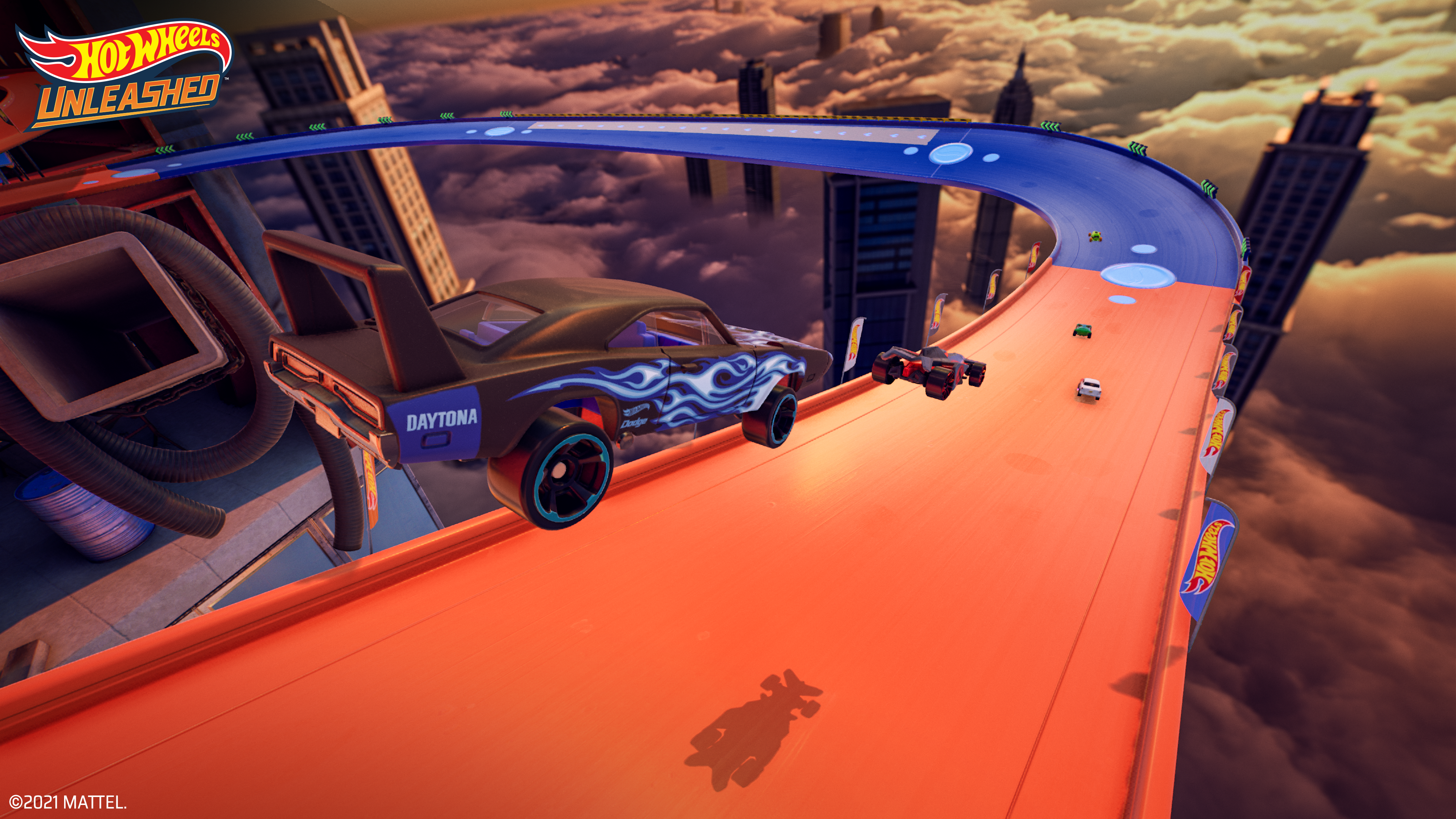 I didn’t go in expecting to fall in love with Hot Wheels Unleashed but I’ve sunk in more hours than I’ve paid attention to. Hot Wheels Unleashed is boisterous, fast, frenetic, and surprisingly addictive. It’s clear the developer put a lot of care into the finer details and paired with a deep track creator, high level of customization, and accessible driving, there’s no better arcade racer out in the market right now. Don’t miss out on one of the best racers in years.