Outfitted in his iconic black suit and red tie, Agent 47 preps for his last outing in IO Interactive’s World of Assassination trilogy. This pseudo reboot of the franchise has been sending the best-in-class assassin across the globe since 2016. It all comes to a head in Hitman 3.

Hitman’s World of Assassination series has been been an interesting one to follow. Hitman has fallen into the hands of various publishers like Square Enix and WB Games along the way. It began as an episodic venture but quickly turned into a full-fledged package in Hitman 2 after a lukewarm reception to the game prior. Hitman 3 is developed and self-published by IO. Whether you look at the game itself or how the studio decided to handle the creation, it stands to say that there is a lot of confidence in the final product.

Hitman 3 feels like a culmination of everything the studio has learned over the years. IO Interactive is best known for developing Hitman, going all the way back to 2000’s Hitman: Codename 47. It builds off the classic formula of taking down a target in spectacular and intricate ways and expands on it. If you’ve played the previous entries of the trilogy, you’ll likely understand that a single playthrough of Hitman 3 is short and sweet. Though, it’s the game’s progression system and replayability that makes it such a standout.

Hitman 3 picks up shortly after the events of Hitman 2. Agent 47 and fellow assassin and friend Lucas Grey continue their mission to tear apart the shadowy empire known as Providence. Backed by Agent 47’s handler, Diana Burnwood, the two embark on a mission to various locations and fulfill their contacts of killing the last major players in the Illuminati-like organization. This leads Agent 47 across the globe to new vistas offering varied environments. Much like Hitman (2016) and Hitman 2, Hitman 3 contains six locations to visit throughout the campaign. You’ll find yourself in one of the tallest buildings in Dubai, a Knives Out-inspired mansion in Dartmoor, a drug-fueled club in Berlin, and the shining neon streets of Chongqing to name a few. 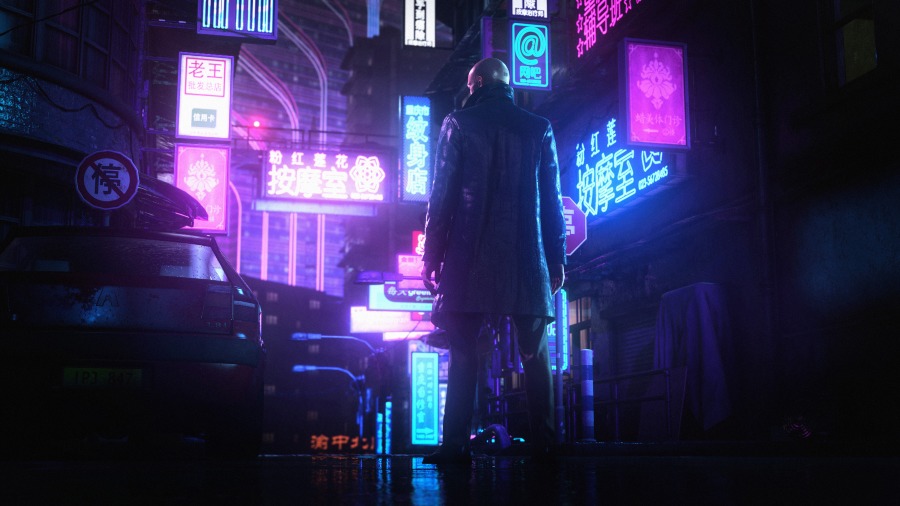 The narrative has often taken a back seat in previous games. The franchise has never been focused on the A or B plot. Instead, Hitman shines when it’s the stealth-oriented gameplay that takes center stage. That said, I felt as though the story of Hitman 3 has been the most compelling since 2006’s Hitman: Blood Money. We see the fruits of IO’s labour pay off in many ways. Although the relationship between Agent 47 and Lucas is relatively new to us, their dynamic is very fresh. Agent 47 is often seen as a stoic one-dimensional killing machine. He’s often merely a cold-blooded master of disguise. While 47 doesn’t entirely break out of that mould, we see branch out ever so slightly. We’ve seen glimpses into 47’s moral compass as he’s shown to care about certain characters in the past. The relationship between him and Diana is expanded on in ways I can’t recall seeing in the franchise thus far. There’s an indisputable amount of respect shown between the two in the past. Yet, in Hitman 3, they show to care about one another’s well being.

Given that there are only six chapters with short CGI cutscenes thrown in between, a lot of the narrative points are rushed, especially towards the end. Certain plot beats don’t have a chance to marinate over a long period of time, which does lessen the impact. It’s not to say that by the end of the game, I was left wanting more. Hitman 3 told it’s own narrative while continuing specific beats that were seeded in at the start of the trilogy. Though, if only we were given a bit more time to hang on certain beats, the resolution would have been all the more rewarding.

Hitman 3 features some of the biggest and most fleshed-out environments IO Interactive has ever created. When taking my first few steps in the game’s Dubai mission, I was awestruck at the scope of it all. The intricate level design of each map is simply overwhelming as you try to take it all in. It’s something I’ve often struggled with in the past few Hitman titles. Although fully aware I am not meant to take it all in on the first go, I was crippled by the sense of urgency to see all I could. I didn’t want to miss a single moment or interaction between main targets and secondary NPCs. 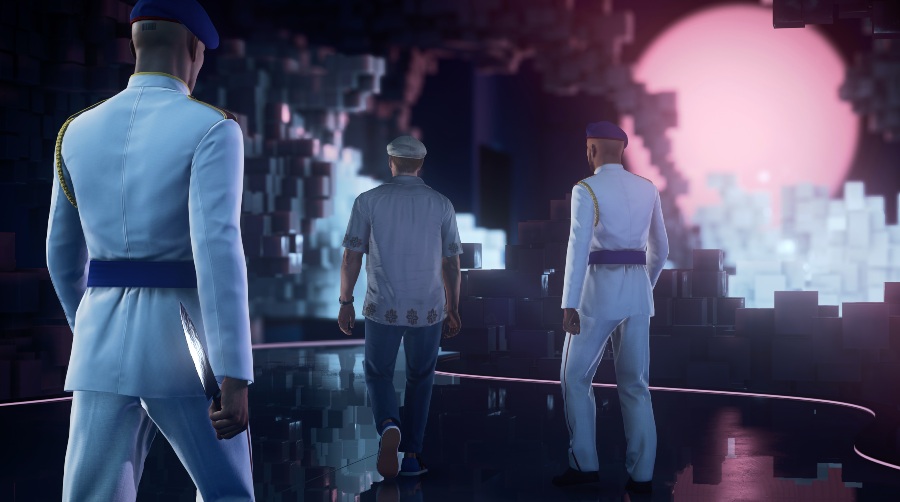 To appease some of that anxiety, I found myself delving into the game’s Mission Stories. These were once offered as Opportunities in previous titles but hold the exact same function. It’s always a wise decision to take part in the Mission Stories as the guided paths eased me into the map’s sub-areas while opening up some enticing methods of assassination. These stories also delve into some of the overarching plot points, giving more exposition to who your target is and how they play into the larger narrative. The elegance of Hitman 3’s gameplay is that it doesn’t force you to act on these Mission Stories. They exist but you can easily pursue your own method and it never once disrupts the gameplay.

The overall presentation of Hitman 3’s mechanics is as fluid and impressive as I’ve seen it in the franchise. Getting over my anxiety and starting to focus on the task at hand, I was blown away by how well thought out every aspect of the maps are. From the positioning and behaviour of NPC to how thoughtful the placement of items on the map are. It all works to complement the level design while not giving the player an inherent advantage over the situation.

Learning the ins and outs of a map is part of the core gameplay loop. Whether your cover is blown by an enforcer (an NPC who can see through disguises) or being caught on camera, it’s the natural cycle of studying the map. Hitman 3 offers the typical difficulty models. Playing on harder difficulties will put more restrictions on the items you’re able to smuggle and carry past frisks. The easier the game is, the more oblivious enemy NPCs are to your actions. Regardless of your choices, it all feels very fair and plays into the realism of this game’s ruleset. A large part of Hitman 3’s allure is its replayability. Challenges are once again featured and they are offered on a grand scale. There are your more formal challenges like complete Mission Stories or do a Suit Only run. Though, more commonly, Challenges encourage players to think outside of the box and approach the mission in different ways. It’s not too common for me to complete a mission and immediately want to dive back in to try something new. Yet, after two full playthroughs of Hitman 3, I still have a lot to discover and experiment with. Completing Challenges is all a part of the game’s progression system. The more Challenges you complete, the more XP you gain which unlocks new weapons, items, disguises, and starting locations for your next murderous romp. 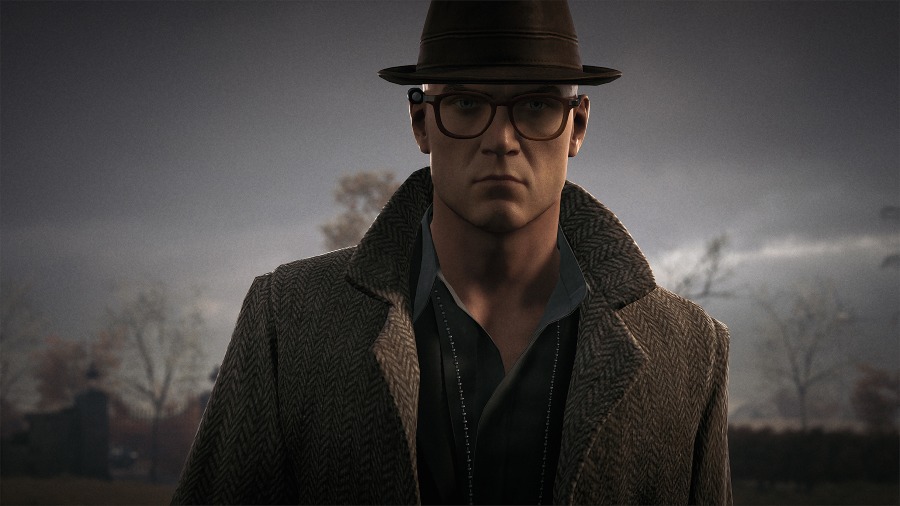 21 years of iterating on the franchise and IO Interactive still brings new elements to the franchise. Hitman 3 introduces shortcuts. These locked doors and ladders, which when unlocked, permanently opens new ways to approach areas of the map. Agent 47 now has access to a camera. Using the camera, the player can scan windows and keypads. Sending data to Diana or Lucas, these doors and openings can be remotely activated. It’s not inherently changing the way you play, but it’s that added element that makes you feel like Agent 47 is a master of his craft.

Taking your skills between missions is only a segment of the content Hitman 3 provides. The game also includes Feature Contracts and player-created Contracts to complete outside of the campaign. These ancillary modes revolve around the core maps Hitman 3 includes but feature customized objectives to complete and leaderboard scores to overthrow. They always provide a nice break away from the grind of completing Challenges. Sniper Assassin, the franchise’s “multiplayer” mode returns as well. I’ve never found this to be very compelling, though fans of the mode will surely be happy. New maps are provided as two players compete to snipe the most amount of targets within an allotted amount of time. It’s a novel idea but never spoke to me as a player. Additionally, legacy content from Hitman (2016) and Hitman 2 is available to players who have purchased those games. Progression can be brought over to Hitman 3 where you can replay those missions with the quality of life changes.

A Hitman For a New Age

While Hitman 3 is readily available on previous generation consoles, there are advantages to playing on the new hardware. My review process took place on the Xbox Series X. As someone who cautiously creates multiple save files to allow myself to experiment, the loading times are quite impressive. Hitman’s Glacial Engine is working in full force to deliver some breathtaking environments. Even while having some of the most densely populated areas in a Hitman game, there were no noticeable hiccups on screen. Taking in the levels in beautiful native 4K on the Series X, I was astounded when I discovered that ray tracing was not even implemented. The way the lighting hits objects and environments in different ways is splendid. Even in some maps, the reflections bouncing onto the ground are immaculate. IO has said it is working on enabling ray tracing on the Series X. However, even without it, Hitman 3’s visual standout from the get-go. 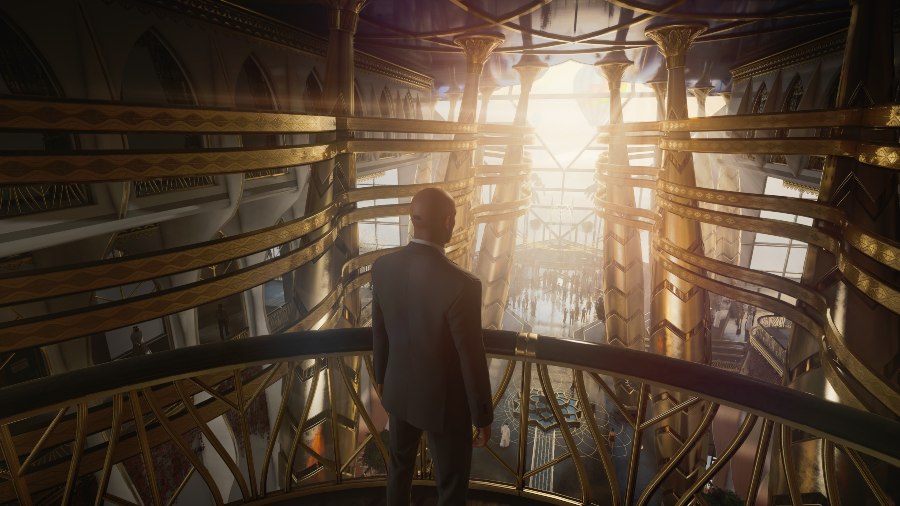 The major performance issue I experienced on a very consistent basis is server dropouts. Due to Hitman 3’s persistent online state, I was struck with notification after notification that the connection to the server was lost. Thankfully, it doesn’t negatively impact the progress you’ve made thus far. However, it’s an aggravating distraction that takes away from the immersion of the game. This has been a pain point in Hitman in the past. It’s not something new, I commonly experienced the same problem when playing Hitman 2 in 2018. For a studio that does so much right, not having a stable server ready for players seems like an oversight and I hope it is rectified in due time.

Hitman 3 closes the book on Agent 47 for the time being. Knowing full well that the studio is moving forward with Project 007, I’m satisfied with the conclusion we got in this game. While portraying an end cap for the world’s greatest assassin, Hitman 3 also feels like a climax of all the work the studio has put together over the ages.

While the game does not rewrite the script for stealth-oriented games, Hitman 3 displays the working knowledge IO has in game creation, level design, and core progression systems. Hitman 3 knows what it is and rarely ever fails at proving that in its hands, it possesses the benchmark for games in this genre. If you’re a fairweather fan or a newcomer to the franchise, there’s no better time to jump in. Especially with the added bonus of improvements made to Hitman and Hitman 2.