Not So High On Life

Comedy in games has always been a tough nut to crack. More often than not it doesn’t seem to work for most players; jokes fall flat, physical humour doesn’t quite feel the same, and comedic timing can be difficult. What High on Life brings to the table is a stellar and world-renowned comedy mind of Justin Roiland and infuses into a first-person shooter. But does the Rick and Morty mentality make this game a laugh-out-loud and action-packed title? The short and less-than-descriptive answer is… sort of.

High on Life uses its distinct sense of humour from the second you hit the A button to start the game. Check out the video above for the first 20 minutes of gameplay and some early-game boss fights.

It’s clear Squanch Games and Roiland are here to have a good time. Almost immediately, the Earth is overrun by wacky and foul-mouthed aliens looking to take over and use humans for experiments and to fuel the drug trade throughout the galaxy. In the end, though, this is just a goofy excuse to give you extraterrestrial baddies to shoot and decapitate with the various weapons and abilities you’ll acquire throughout your adventure. That all ramps up quite quickly and in a pretty entertaining way when your house and your big sister zipped onto another planet to take out the alien cartel called the G3. Not only do the jokes come flying fast and furious from the start, but so do the bullets, lasers, and green galaxy goo. Roiland himself voices the game’s first and main gun (yes, the guns talk… a lot!). He does an excellent job of delivering a lot of the exposition and doing most of the heavy lifting when it comes to not only piecing together the story but giving hints and being the player/audience surrogate. It’s not an easy job, but someone has to do it!

High on Life consists of a handful of weapons, each with its own series of traversal and killing abilities. Kenny (Roiland) for example, is essentially a pistol with a built-in grenade launcher. Gus (voiced by J.B. Smoove, and my favourite voice of the bunch) is a shotgun that also shoots out giant discs that can bounce off enemies and create platforms to jump on. There are three others, but I’ll save some of the surprises if you plan to play the game, those discoveries and new ways to play were a big part of why I enjoyed my time.

As you travel around to stop the cartel, you’ll be ziplining, climbing, jetpacking, and shooting a ton of alien enemies. Each “stage” is themed around a bounty, culminating in an epic and wild boss fight. For me, this is where the game felt most alive and well-rounded. Once I got the hang of how the shooting mechanics felt, I was having a blast popping off gun and melee combos like it was my job. This system is where I believe High on Life shines brightest. With the variety of guns and their different firing capabilities, I was juggling enemies in the air, then traversing to melee a sniper, all before I jumped into a boss fight where I was required to use my full arsenal to be victorious.

Along the way, you’ll also purchase and discover a number of mods for each weapon. You can equip them to tailor the situation on the fly in the simplified menu system and just blast away. For example, Kenny can split his glob shot/grenade into three smaller pieces. I had a great time using this one in particular because it allowed me to run and gun with less precision while also hitting more baddies and tossing them in the air for a wild and effective combo. This mod system isn’t massive, but it’s enough to give you some variety and provide some welcome change to the limited selection of guns in the game.

It’s all quite ridiculous and goofy, but it works! High on Life brings you to a variety of biomes to fight an even larger variety of aliens. At times, I did wish the time in between bounties was a little shorter and the battles came a little more fierce and more often, but it wasn’t enough to ruin my time with the game. There’s also a series of collectables and upgrades you can find or purchase; none of them are a necessity, but many will help you on your path to victory. The majority of these can be accessed through systems similar to Metroidvanias titles, as you utilize newly acquired skills and guns, you can return to areas that were previously inaccessible. For the most part, this works, but I also didn’t feel all that rewarded when a trading card popped out of a chest (although, all of them are quite funny) instead of money I could use on upgrades.

I began this review by talking about how comedy in games can be tough, and it is.  High on Life wins this battle, but not at every turn. With an approximate 12-15 hour run time, the game has a whole lot of dead air it feels like it needs to fill, especially when story beats hit in between missions. This is welcome at times, but it also feels a little grading. Every once and a while I just wanted the game to drink one less coffee that day and chill out. There is an option to turn down some of the gun chatter though, an option I took advantage of. 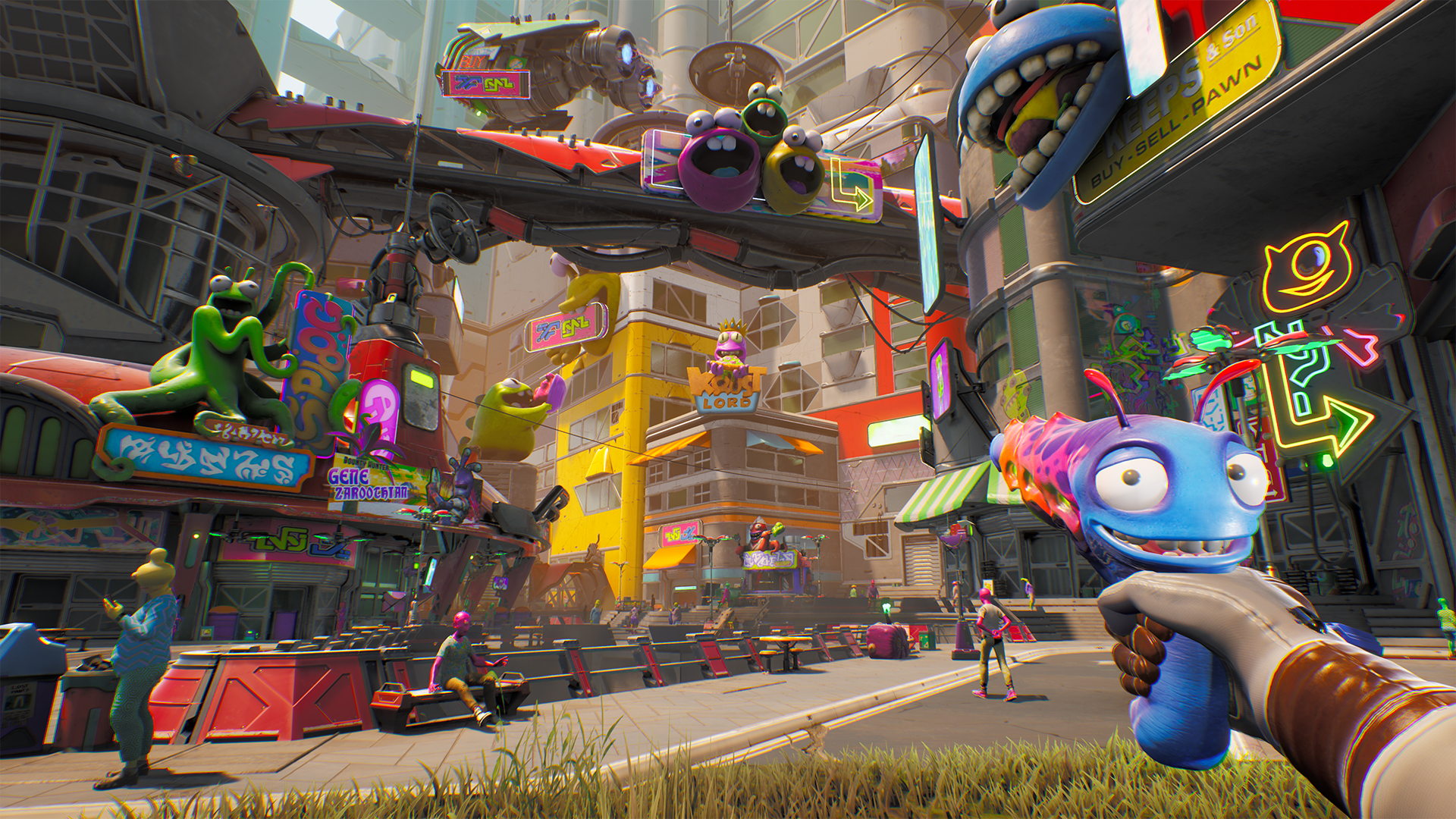 On top of that, the dialogue in the game is very crass, very rude, and filled with a ton of profanity. Now, I’m fine with getting in some adult language, especially from writers and a team that has a history of making incredible Adult Swim shows; but after a few hours, the dialogue felt like too much. Sometimes, it felt like an f-bomb or other swear word was tossed in a sentence just for the hell of it, not because it added anything to the character or the conversation. On the upside, nearly all of the voice acting in High on Life is exceptional. Everyone seems to be having fun with the script and the crazy world it’s offering up. High on Life does look great though. Despite some areas feeling pretty sparse, the worlds are all unique and fun to explore. Aliens good and bad, all ooze with creativity, are well voiced acted, and bring lots of life to the game. The lighting is excellent no matter where you are, with reflections, shadows, and everything in between feeling real and dynamic.

High on Life strikes a great balance throughout most of its adventure with some really fun shooting mechanics and dialogue. Sure, parts of the presentation became grating to me over time, but I pushed through. I knew that even if I was getting tired of hearing the same aggressive, profanity-filled tone from some characters; I was moments away from the game’s core enjoyment.

Especially if you’re an Xbox Game Pass member, I say it’s worth giving this game a shot for a few hours to see if it clicks with you. While the story and some of the characters became less of a selling point for me over time, I really enjoyed the gameplay the more and more I played. Come for the writing and acting, stay for the goofy and unique gun fights.