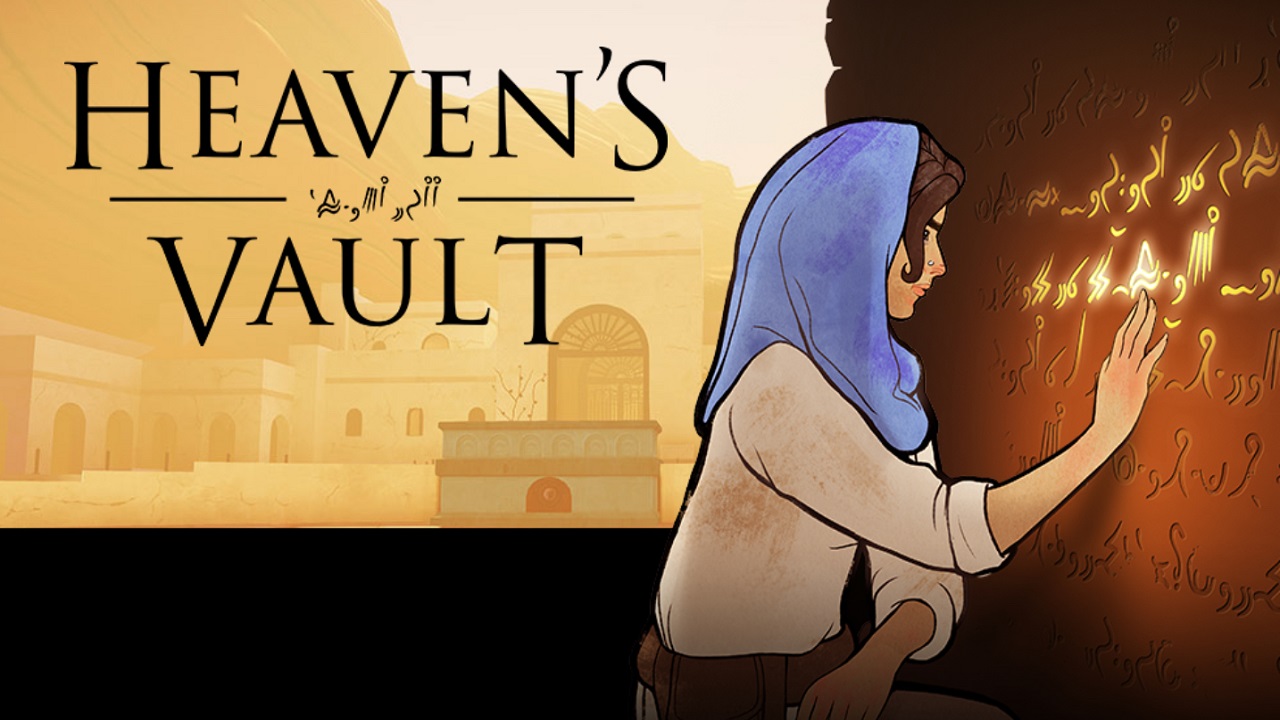 Technology has advanced drastically where anyone can pay a fee and learn various languages at home, or on the go, with software such as Rosetta Stone. You will be guided through each lesson as new words and phrases are introduced to expand your knowledge. Inkle has created its own ancient language in Heaven’s Vault and the only way to decipher its meaning is through careful consideration, trial-and-error, and speaking to those around you. I was quickly transported back to my ancient Greek and Middle Egyptian classes at the University of Toronto where everything can appear daunting at first, but soon the excitement of translating inscriptions takes hold of you as you look forward to the next puzzle. Heaven’s Vault is full of inscriptions that await your assistance.

Heaven’s Vault will have players embarking on a journey as the archaeologist Aliya Elasra as she travels across the Nebula aboard the Nightingale alongside a robotic companion Six to discover the whereabouts of a lost Robotocist. It is quickly revealed that each new clue of information creates several new questions waiting to be answered about the past. Your travels will have you arriving at many different planets where secrets are kept and conversing with local inhabitants will aid in understanding various inscriptions that are encountered. Players will discover that not everything is what it seems and the truth is worth risking everything. This adventure would be bland in terms of conversation if it was not for your robot companion Six. He will initiate conversations during the journey, highlighting key aspects of specific areas, reminding you of your objectives, and even assist with fast-travelling to locations once you have discovered them. There are numerous dialogue options to choose from with Six and other characters that you will meet throughout the Nebula. Each individual has their own personality and responds differently to your actions. Some will be friendly while some will be hesitant to help an outsider, so you must make decisions on whether the truth should be told, or present them with a lie in order to attain the information you are looking for. I wish there was more dialogue within Heaven’s Vault, but that is only a minor concern.

The most enjoyable aspect of Heaven’s Vault revolves around deciphering inscriptions to understand an ancient language. The initial guessing and trial-and-error approach to phrases and words will have you scratching your head at times, but words will be confirmed as you progress through the story and interact with individuals and the environments. There are many inscriptions to find and each one tells a story of its surrounding, so it is best to pay attention to the location you are currently situated in, its role in the Nebula, and what god they worship. It is also refreshing that your battles are overcoming translation obstacles instead of mobs of gunmen who are trying to locate treasure. As noted previously, deciphering inscriptions can be difficult, so it is nice to receive aid whenever possible. Aliya and Six will sometimes comment on your word selection, but incorrect choices will still be taken. You will encounter new inscriptions and receive assistance from inhabitants and various texts on the proper meaning of certain words. You can then pull up previous inscriptions at any time to utilize the recently acquired knowledge to select different words to get closer to fully deciphering and understanding the meaning of each phrase. Players will continually be impressed with themselves as they continue to successfully translate phrases and uncover additional information that will help them in their journey of discovering the truth behind several mysteries. It is important to explore areas carefully as inscriptions are located in many areas such as on artifacts, buildings, and even sculptures. Inkle does a great job of highlighting and alerting players to important aspects of the game, otherwise the majority of experiences would surely be missed. Your archaeology and problem solving skills will continually acquire new information about the history of the Nebula and lead you to completing your mission.

Heaven’s Vault also features a unique art style that encompasses hand-drawn 2D elements within the 3D world. Movement felt a little strange at first, but it quickly becomes the norm as you are immersed within the world. Some of the most visually stunning moments take place aboard your Nightingale when sailing across the rivers of the Nebula. The ability to fast-travel was implemented shortly after Heaven’s Vault release, which was a nice feature to have as certain journeys can take an extended amount of time. Inkle has created an immersive world that has its own ancient language that is inscribed on many items and buildings that await your translation. While this may not be enjoyable for some, I was very impressed at the enjoyment I received from exploring various moons and deciphering passages that presented new information about the story and the world as a whole. Heaven’s Vault comes recommended as it presents players with a unique adventure while showcasing a beautifully hand-crafted art style and focusing on the importance of language.