With the popularity of Stardew Valley, the idea of combining farming simulation and role-playing mechanics into one game isn’t exactly an original idea anymore. Instead, nowadays it’s what a developer does with the concept in their own game that can stand on its own in a truly unique experience for the player. This is an approach that Harvestella from publisher Square Enix sadly failed at in my time with the game. In a nutshell, Harvestella is not a game-breaking or terrible game but the game itself was one I was easily bored by with its uninspired story, world, characters, and gameplay loop.

A Lot of Ingredients in This Farming JRPG Meal

It felt like developer Live Wire took a lot of ideas and concepts from great inspirational games (Stardew Valley, Final Fantasy, Persona, Animal Crossing, Harvest Moon) and fumbling put them into Harvestella. The result of all that work led to a pretty boring and mediocre game that at times made me want to skip the game’s dialogue and move on with its lack of approach to hooking the playing. While I’m not too much a fan of Harvestella, its approach to giving players a farmer/life simulation in a world that has so much Final Fantasy Crystal Chronicles energy was a real treat at the start but it never maintained that momentum, and I do appreciate what the game was trying to do alongside its job system for your custom character. Before the Harvestella’s story kicks off, you get to choose how your character looks which starts by choosing between the three genders choices including male, female, and non-binary – the latter option is a welcomed addition, one that I wish more character creators offered to be more inclusive and should include. Other customizations include your character’s skin, hair, and eye colour, although you can change your hairstyle it’s limited to two options. Overall unlike other character customization games, Harvestella doesn’t give the players all the tools to make your character an actual avatar of you, what I saw was a stranger but it’s not my biggest complaint about the game. Getting into the actual story, after a flash you find yourself unconscious in what looks like an unfamiliar world void of colour to both you, the player, and your avatar as you seemingly have amnesia. The world is usually not like this as its currently experiencing a day-long phenomenon known as “Quietus”, the season of death. This is a short period between seasons when people can’t go outside their homes or they’ll face a slow death from a disease of the same name. Your character is seen at the entrance of Lethe Village seemingly dead or unconscious from Quietus, but what looks like a goddess revives you and chooses you to be the saviour of this world. As you leave the village you come across its own’s Sealight, one of four giant crystal light structures that govern over the four seasons to bring balance to the world.

As you look at the Sealight, Quietus affects you once again, and later in the morning after Quietus, you wake up to Cres, a doctor performing healing magic on you. After introductions, you now get to explore the Lethe Village which is when things start to go down as all four Sealights unpredictably light creating a shroud of darkness in the middle of the day and chaos in all four locations. As this is going down meteorite-like objects are falling from the sky, a result of a time travelling subplot that introduces your character to your first party member, Aria who aims to change the future by going to the past. After that, with nowhere for you to stay the village gifts you and Aria shelter at a large vacant property located across from the village where you slowly build out your farm as you go through the game.

This location is how you will primarily earn money to pay for and upgrade your farm as you have a blue chest that you can put items into at the end of every day. It’s a different approach to the “buy and sell” design approach of most games in the RPG genre, which is unpredictable at some points because you don’t know how much you’ll get until you see it calculated for yourself. As your character gets situated at the Harvestella‘s home base, you’ll find early that the goal is to explore each Sealight and fix the corruption that’s plaguing them while going through the sub-plot of the party members that you’ll meet in each town. These stories and side quests are pretty generic, they didn’t hook me at all and go on for far too long. Harvestella‘s gameplay isn’t breaking any new ground while technically a JRPG, it’s more of the action variety that honestly and weirdly reminded me of the button-mashing nature of some of the early Sword Art Online games on PSVita. Fighting enemies get boring real fast which made it feels less innovative and more like a chore than something to be played for fun. When you enter an enemy-invested location in areas bridging to the next area or in Sealight dungeons you’ll notice a map in the upper corner of your screen that you’ll slowly have to fill out as you explore which pushes the player to discover everything on the map including obstacles.

As you go through these dungeons you do level up but not in the traditional RPG way, all the experience points you get from slaying enemies are counted up at the end of the day which is how you get stronger. That’s not the only way though, it’s a basic sense that more things unlock as you go through the story and that’s true for Harvestella and its job system. As more party members join your team, the more jobs relating to a specific party member unlock these jobs for your which is 11 in total which is grand total of 12 when you include your default job, Fighter. More time you use each job the more JP (Job Points) you earn which you can use to unlock new abilities or enhancements. You can switch between three jobs in gameplay which you can customize in the party tab in the main menu. Honestly and I know this isn’t saying much with how much I’ve been down on the game but the job switching is my favourite part of the game, reminds me a lot of switching your personas but for weapons. The developer took a slow day-and-night cycle approach to their game with time progressing every 10 minutes which in real-world time is about 5 to 10 seconds. In addition, your character has a stamina bar that slowly lowers throughout the day through actions (fighting, farming, mining materials, etc.) which can be replenished through prepared meals. All this has created a unique gameplay for all intents and purposes and not to borrow too much from Persona 5 here but the game really teaches the player to take their time. Thankfully though, the main story and side quests don’t use up time a lot. Although there are instances where time is used as a currency in dungeons on those obstacles I mentioned if you want to create a shortcut (ladder, bridge, etc.) to make it easier to travel through a floor in a dungeon you give up an hour of your day to build it. Additionally, the game really emphasizes your use of time even more at home as you can use it to create meals to give you an edge in battle or tools like creating bombs to blow up a wall in a dungeon. Don’t waste too much time though as that time does count up as there are only four 31-day seasons, you don’t have an in-game year at your disposal.

Speaking of time, let’s talk about farming – the game was more so marketed as a life simulation game with RPG elements but’s quite the opposite as the farming elements are much lighter in contrast. Where you can farm starts initially small covered in rocks which is where you learn to smash via a hammer you crafted. Then when you’re in farm mode which activates as soon as you approach the soil you can start digging out to plant your vegetable/fruit seeds. You can get seeds naturally in fights or buy them yourself but they can get expensive and there are times when some can only be grown in a specific season or location (caves or in water).

One final thing is of course through watering your plants but to do so you need to select from your the quick select option for farming equipment on your left which is where you can switch between watering, the hoe, and your hammer. Farming feels more so cozy in the game and the rare time I got enjoyment as I see the progress of how everything is growing in my front farm yard. One of the weirdest design choices I found is that voice acting can only be found during gameplay and not actual dialogue that pushes the story forward. I can kind of see this as a cost-cutting approach to not fully pay for voice acting which no matter how you look at it is a trashing approach as these characters don’t have a real voice and their personality doesn’t truly come across. Just pay your voice actors for all the work they deserve or don’t even bother trying. 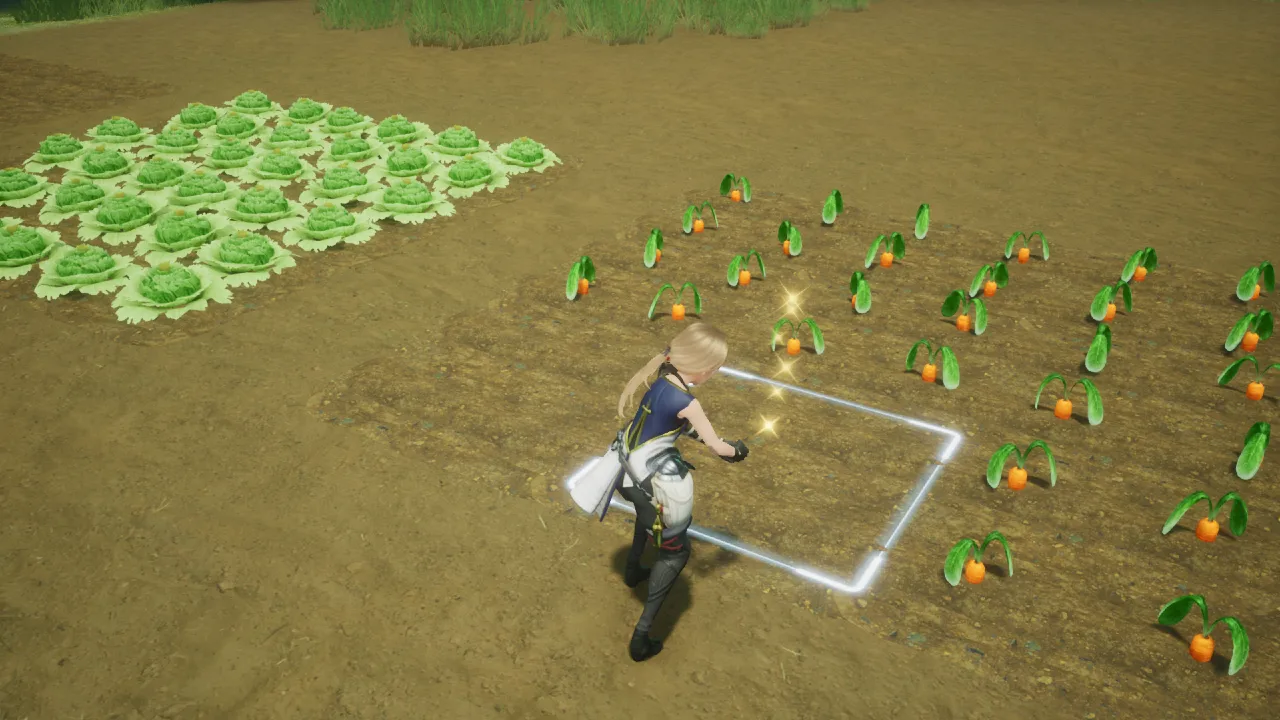 Harvestella has an identity issue by doing what other popular series have done before but with less success. This confusion can be seen in the game’s marketing with it selling the game as a farming sim with RPG elements when it’s the exact opposite with farming being only a section of the game that was a Cozy experience but is not reflective in the overall product. With its repetitive gameplay and its boring narrative, Harvestella is a hard game to recommend in not just this busy month of big releases but any month. I think developer Live Wire does some good things in this JRPG that if they had a second chance at executing this vision again something more interesting could be produced.