The thought of a rapture-like event is enough to send shivers down my spine. Distilling the streets of a well-populated city like Tokyo littered with nothing but loose clothing and personal effects is haunting yet oddly fascinating. This is exactly what I experienced through the eyes of Akito in Tango Gameworks’ Ghostwire: Tokyo.

The studio is famed for its work on the third-person survival horror franchise The Evil Within. Showing a ton of prowess in creating a pseudo-Resident Evil IP, I’ve been enamoured by their work over the years. Ghostwire: Tokyo is a far-flung departure from the psychological horror Tango has delivered. This erratic shift to a stylish first-person action-adventure title had sparked my interest but for one reason or another, I found it hard to place my finger on what Ghostwire: Tokyo is.

To say that Tango Gameworks has spread its wings feels like an understatement. Where The Evil Within knows exactly what it is and wears its inspiration on its sleeve, Ghostwire Tokyo feels like an amalgamation of different genres and ideas. Some line up quite well, especially when I found myself inundated with stories inspired by Japanese folklore. This game serves as a love letter to Japanese culture and the city of Tokyo. Though, those moments are broken up by traversal and combat that never quite clicked throughout the 13 hours I spent on the campaign and 7-8 additional hours on side content. As I walked away from the game, I didn’t feel a whole lot of anything.

To set the stage, Ghostwire: Tokyo opens up with 99-percent of the population in Tokyo mysteriously vanishing thanks to a paranormal event. Laying waste on the street are civilian clothing, purses, bikes, etc. We are then quickly introduced to Akito and the spectral detective KK, who latches on to his body. During this event, the two determine they need each other to fight the incoming invasion of Visitors and a group of Hannya mask-wearing foes now residing in the city. 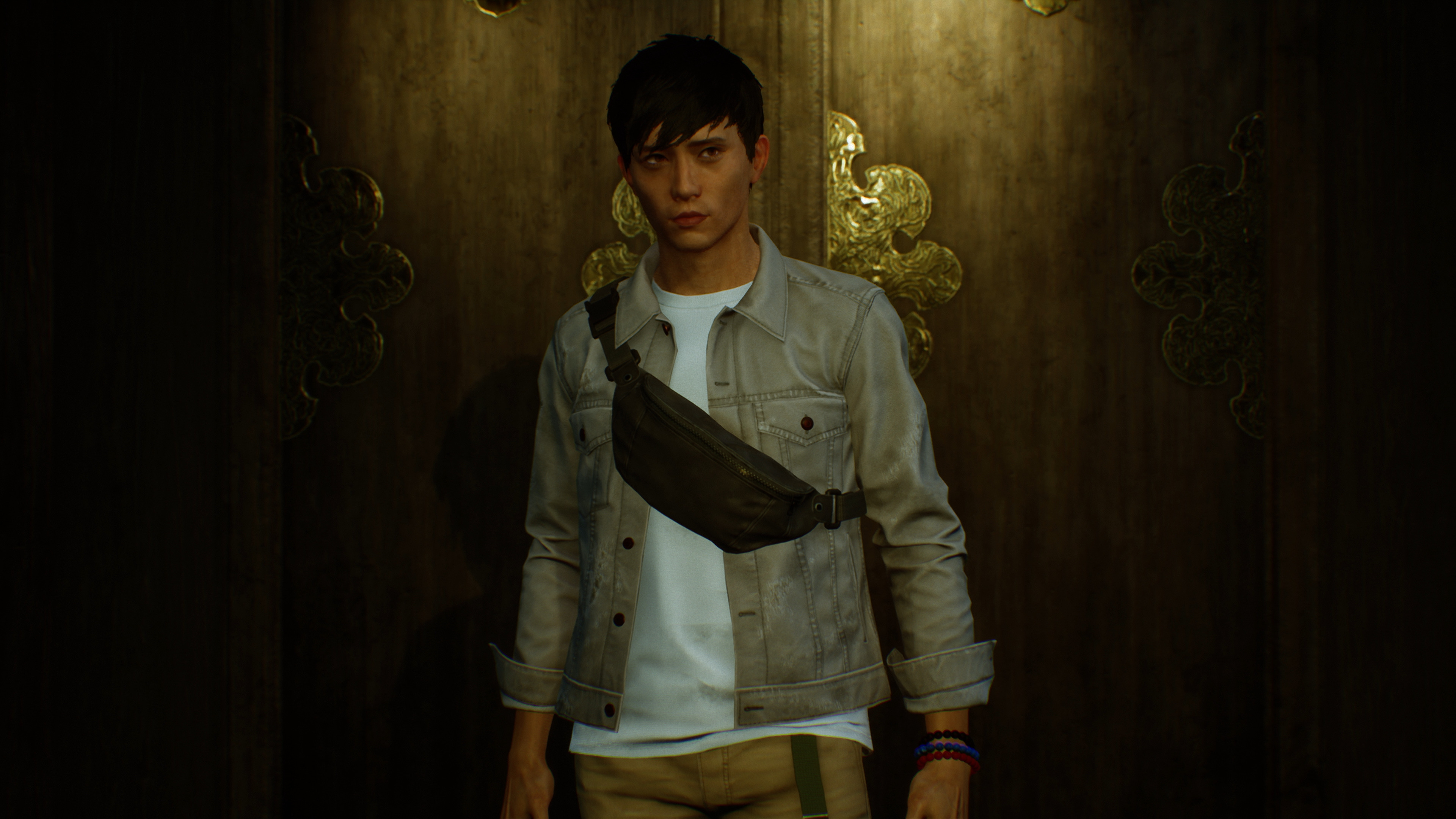 The two are set up to have this budding relationship as the two are co-dependent on each other. Akito’s sister, who is comatose in a hospital, has been kidnapped by the Hannya masked Visitors. KK, whose background is shrouded in mystery, has closer ties to the group. Seeing as Akito requires KK’s knowledge on spirits and the enemies at hand and KK requires Akito’s body, the two decide to work together. As a result, Akito can channel supernatural powers dubbed “Ethereal Weavings”. These elemental powers Akito possesses allow him to fight the Visitors and cleanse areas of Tokyo.

I found the setup to be incredibly intriguing. Akito is essentially this one-man army in a barren Tokyo. Ghostwire: Tokyo does take a bit of time to rev its engine. In my preview, I stated that the first two chapters largely felt like a tutorial, catching players up to speed on the story, combat, and supplemental pieces of content. Though, as time went on, I felt like the story never really reaches its potential. By the time credits roll after Chapter 6, I still found Akito to be very one-note. That said, the Japanese voice acting was leagues more interesting than the English version while giving the game a more authentic feel. 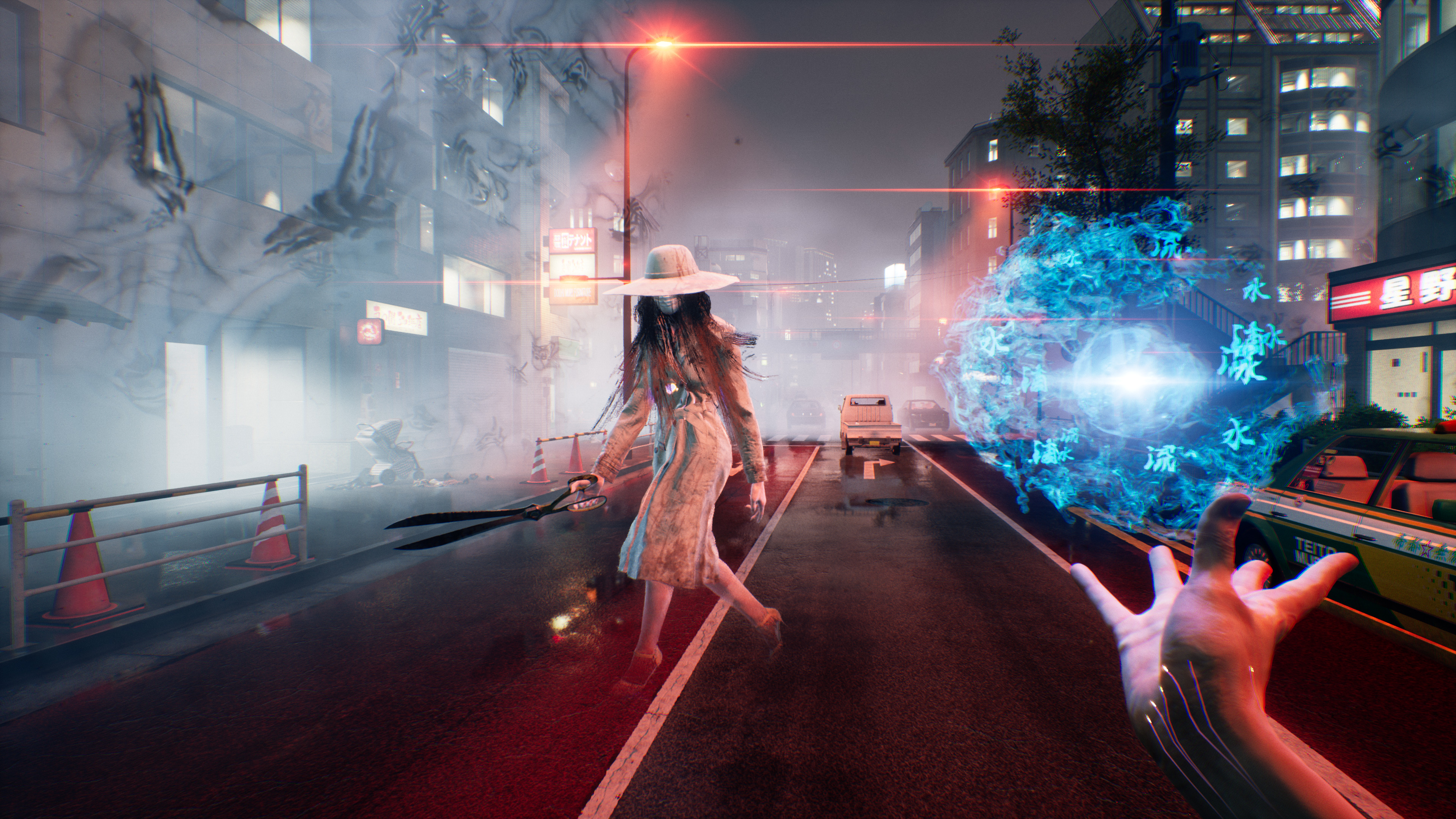 Ghostwire: Tokyo largely tackles loss, the afterlife, and a greater sense of communication to those you love. Despite how out there the game is, thematically, Ghostwire: Tokyo can be relatable in many ways. The problem is that its focal characters don’t add anything of substance. It wasn’t until the last 30 minutes of the game that Akito did something to stand out. Even after that, credits quickly rolled and I found myself being okay to closing the book on his story.

Ghostwire: Tokyo — A City of Lights and Culture

While Ghostwire: Tokyo’s central characters lack personality, the city itself makes up for it. The open-world map of Tokyo is chock-full of atmosphere and culture. Tango Gameworks crafted a world that respects and honours Japanese culture and folklore. As I walked through the desolate streets, the neon lights illuminated through the falling rain. Even with fast travel points unlocked through cleansing Torii Gates, clearing the fog of war, I found myself wanting to travel by foot. 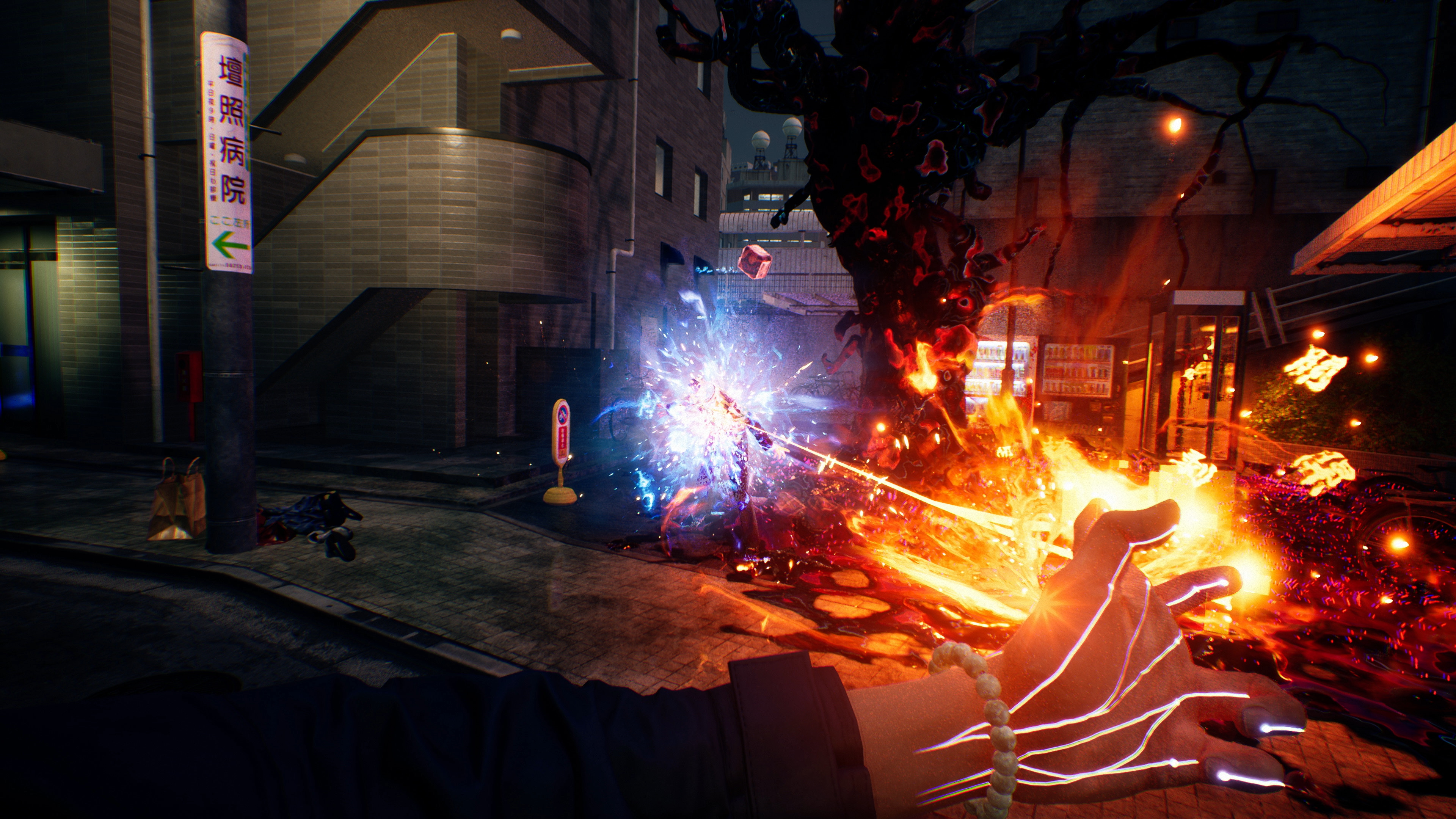 Ghostwire: Tokyo offers quite a lot to do aside from the admittedly short campaign. Just as much time can be put into completing side missions and finding collectibles. Akito and his spectral friend are able to assist lingering spirits throughout the world. Many of these ancillary quests told interesting stories. Though, the gameplay in completing them became rather repetitive. Oftentimes, Akito and KK would investigate a building and track down a spirit. Other times, you’d have to follow a spirit’s footprints. I wanted to be more excited when completing these as the stories surrounding them were genuinely interesting.

On top of helping neighbourhood spirits, Akito can track down Jizo Statues to increase the power of his Ethereal Weavings. Displaced spirits are also littered across the map. Using a paper Katashiro, I found myself bouncing from corner to corner, absorbing spirits and depositing them at a nearby phonebooth in exchange for XP and level progression. Akito also has a spectral vision ability, which allows him to locate currency, spirits and other useful things around the world. Of course, a lot of this can be boiled down to the usual open-world game busywork. I was actually surprised by how similar Ghostwire: Tokyo felt to Far Cry or other checkbox games. I will admit though, it’s not too often that you can approach a pupper on the street, read its mind and have it lead you to a secret. That alone makes up for a bit of the sameness Ghostwire: Tokyo offers in its open world. 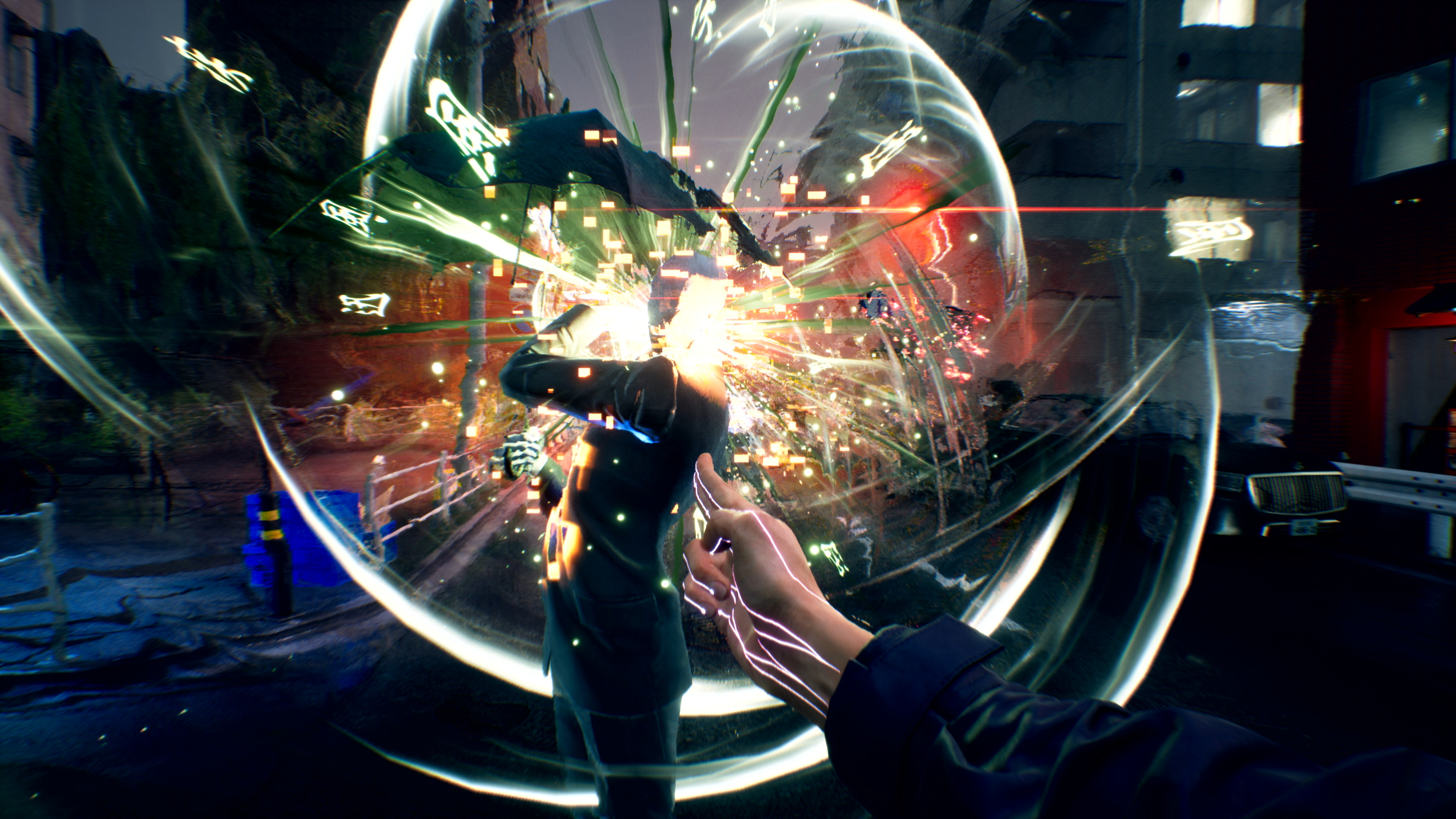 While Ghostwire: Tokyo feels like a horror game at first blush, its actually far from it. There are elements throughout the game that can be a bit creepy. The empty streets and Visitors do give off a bit of an eerie vibe. Though, this is far from what I’ve come to expect from the studio since The Evil Within. I do wonder if the tonal shift can be partially attributed Ikumi Nakamura leaving the project or if Tango Gameworks simply wanted to shift away from traditional scares.

A Game Out of Time

The inherent issue I have with Ghostwire: Tokyo is how it plays. Whether I look at Akito’s movement or combat, the game feels sluggish and outdated. Throughout the game, you’ll come across Visitors who more or less look like variations of Slenderman. You’ll find some that are in business suits and business suits. There are also shorter ones, representing children as well. To defeat them, Akito must blast them using different Weavings. This is always paired with visually stunning particles, hand gestures, and style. The Wind Weaving is the standard attack and feels like you’re peppering them with a pistol gunshot. The Fire Weaving can be charged for a massive single-fire explosion. The Water Weaving has more of a spread, akin to a shotgun. Finally, you also have a bow and arrow. Once enemies have been hit enough times, Akito can then remove their cores, defeating them instantly. The inputs when fighting are able to stand out a bit more thanks to the adaptive triggers on the DualSense. Visually, there are many aspects that can be compared to Doctor Strange’s magic, which is really appealing to me. 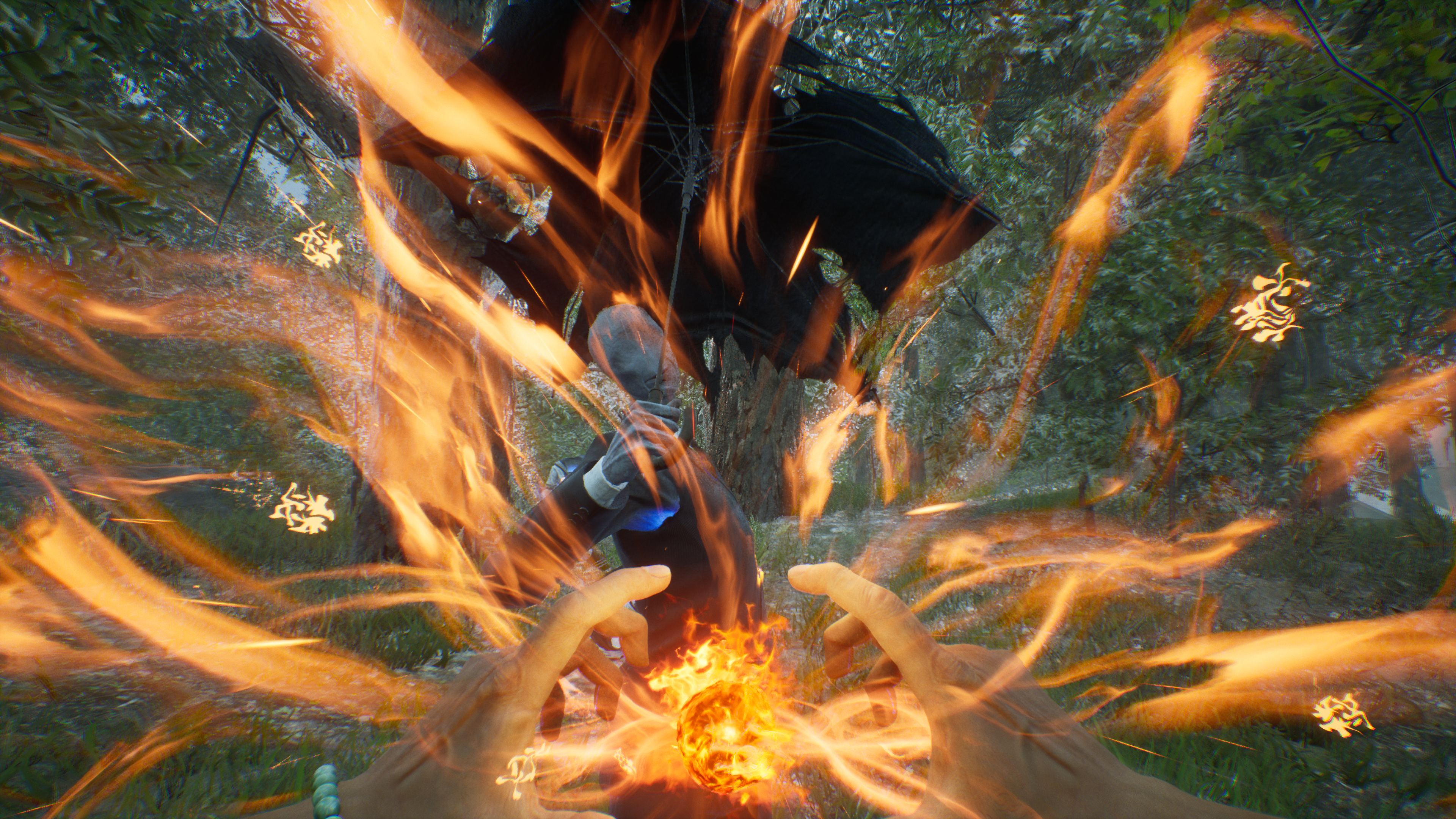 The problem is that even by the end of the game, after sinking countless hours in upgrading the various skill trees in the game, Akito never feels powerful enough. Using the Weavings never has that punchiness from a traditional FPS. Combat didn’t click with a satisfying result. In fact, it feels very slow when compared to contemporary games of its ilk. Thankfully, the game adds in a few new variants of enemies to spice things up every now and again. Though, the enemy AI behaves the exact same throughout, leading to a very mundane routine of hit, hit, hit, snatch core, and repeat. Each Weaving has its own unique “ammunition” of sorts that can mainly be collected by smashing oozing black masses. Therefore, while I loved using the Fire Weaving, its easy to deplete your resources, which forced me to switch Weaving type until I recouped resources.

Traversal can be just as sluggish. Perhaps this is a reaction to the transition to the first-person perspective, but I always felt like Akito was wearing concrete shoes. Ghostwire: Tokyo often feels like it wanted to take inspiration from Dying Light’s parkour. In fact, the game offers a ton of verticality, which is a breath of fresh air when exploring. You’ll often come across flying Tengus, which Akito can grapple to and reach rooftops. The problem is that turning each corner makes me feel like my DualSense was dunked in a bucket of molasses. I even went into the game’s settings and increased the sensitivity. Though, it, unfortunately, didn’t make a huge change. 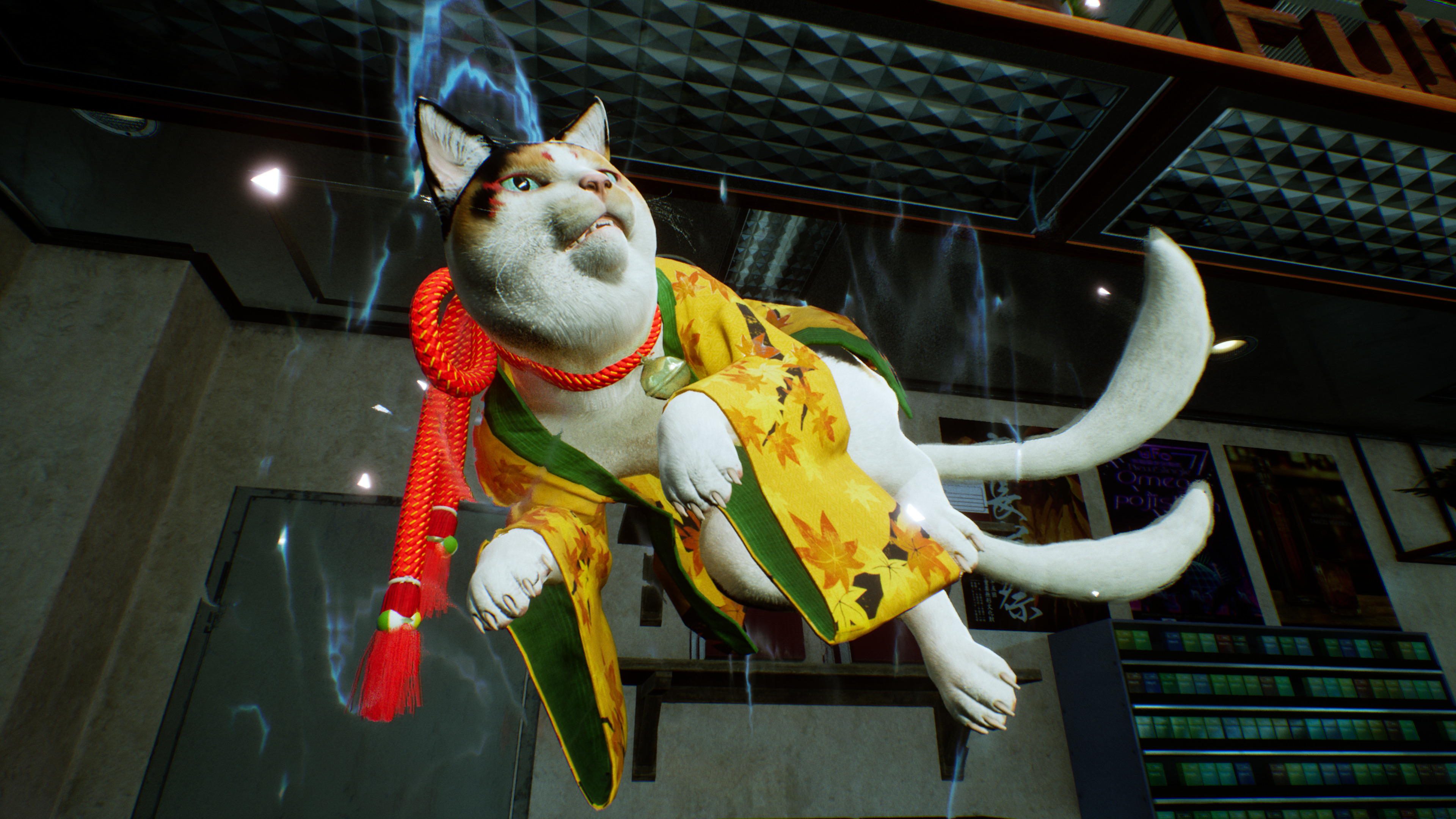 Ghostwire: Tokyo feels like an amalgamation of various other open-world games coupled with a unique style and focuses on Japanese culture. The latter is certainly what stood out the most to me and kept me engaged as I listened to stories of yōkai and visited the various Nekomata shops for healing items. Tokyo itself is the standout character with an incredibly rich atmosphere. Though, that came at a cost as Akito and KK were vastly outshined and boring by comparison.

The game’s style certainly can be seen during combat as lights and particles fill the screen. Though, I wish there was a little more refinement in how Akito fought to make it more engaging. After nearly 20 hours with Ghostwire: Tokyo, I wanted Akito to become a powerhouse against the Visitors, providing a more satisfying arc.

In the end, I do have to respect a team of developers to branch out from what’s expected of them. Tango Gameworks has shown such great knowledge of third-person survival horror, it is admirable to see this shift. Ghostwire: Tokyo may not be the most influential or impactful open-world game of 2022 so far. Though, it gives Tango Gameworks something to work off of for a potential sequel or another FPS adventure title in the future.