The older you get the harder it is to wrangle your friends up in one room for some gaming. Illfonic’s provided the perfect outlet to rustle up the gang and there is no better way than through the iconic Ghostbusters franchise. I’ve been clamouring for a new Ghostbusters title for a long, long time and it feels like the call has been answered as it is pretty clear that developers worked on this entry with pride and a ton of devotion to the source material.

Instead of playing as one of the original members of the Ghostbusters, you play as a recruit who arrives at the barracks where you will be greeted by Ray Stantz (Dan Aykroyd). After brief introductions, you enter the faithfully reproduced firehouse. There you meet the rest of the team, including Winston Zeddemore (Ernie Hudson) who has funded to refurbish of the headquarters after the events of Ghostbusters: Afterlife. You will then be asked to create your character, and then you will begin the tutorial that will teach you the basics of ghost hunting.

I Ain’t Afraid of No Ghostbuster

The mechanics of the game are relatively simple. The four of you arrive at a ghost-haunted location with your team, track it down using the psyche meter, catch it with your proton pack, and capture it inside the ghost trap. The psycho-tensiometer works like radar and will give you directions to the ghost when it is in range. Once you have found it, you will quickly switch to the particle launcher with a single touch and aim at the ghost long enough to catch it with your beam. Finally, all you have to do is throw the trap, open it, and quietly direct the ghost toward it until it is trapped. The catch is that the ghost has three interdimensional rifts that allow it to move quickly through each level, but also to return to the game after being captured. You must therefore also ensure that you destroy these rifts before you can finally capture the ghost. The rifts are initially invisible to the players and only the PKE Metre will allow you to find them, in the same way as for the ghost. Rifts can be hidden in a wall or even in something as ordinary as an old doll or a dustbin. When found, you must attack it with your proton pack. These rifts have a good amount of health points so attacking them with more than one person is a good idea if you want to get there before the ghost comes to defend it. Once you have destroyed all three rifts and captured the ghost, the mission is complete. You will receive experience points according to your performance and the different actions you have accomplished.

Be careful, though! The ghost is not defenceless. It can attack you, or rather engulf you, in which case you will have to clean yourself up before you can continue. It can also possess objects, haunt them, and scare the NPCs that populate the map. All of these actions increase the haunted bar. When it reaches 100%, the ghost wins. Don’t worry, you can slow down the ghost’s progress by talking to the NPCs to try and calm them down. A minigame then begins where you have to click on a green bar of different widths at the right moment to calm the character down. It’s simple and not very difficult, but it’s one more tool you’ll need to use to win. 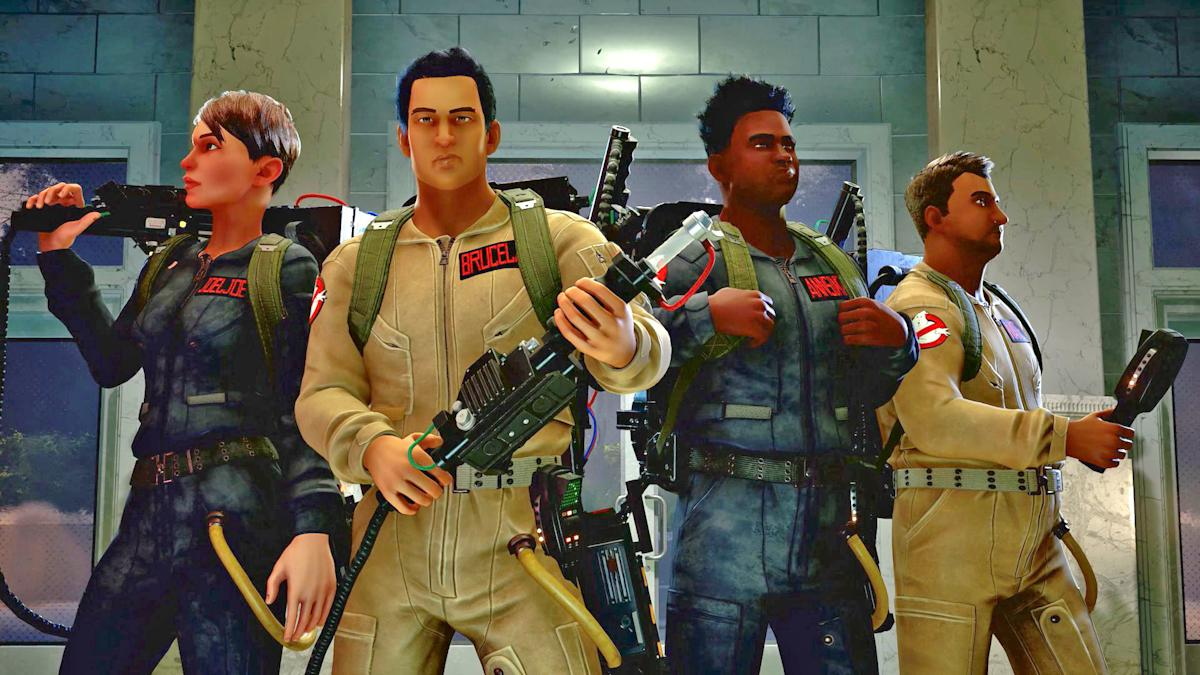 Except You Are The Ghost

Ghostbusters: Spirits Unleashed also allows you to play as a ghost. Fairly early on in the adventure, you will have the opportunity to cross over into the spectral world to play as a ghost. From there you can start a game and find yourself in front of 4 hunters ready to capture you. The gameplay as a ghost is very different. You have to haunt the place where you are by terrorizing poor NPCs, possessing objects such as chairs or fire extinguishers or spitting ectoplasm everywhere. You’ll also have to protect your three rifts from being destroyed by the hunters. When you are caught, you will return to one of your rifts until you have none left. There are five types of ghosts, which you unlock by gaining experience and levelling up. You start with the ectoplasm, then you unlock the slime, then the bruiser, the screamer and finally the poltergeist. Each ghost has several visual variants and colours. Each ghost also has the ability to ensure a different experience. 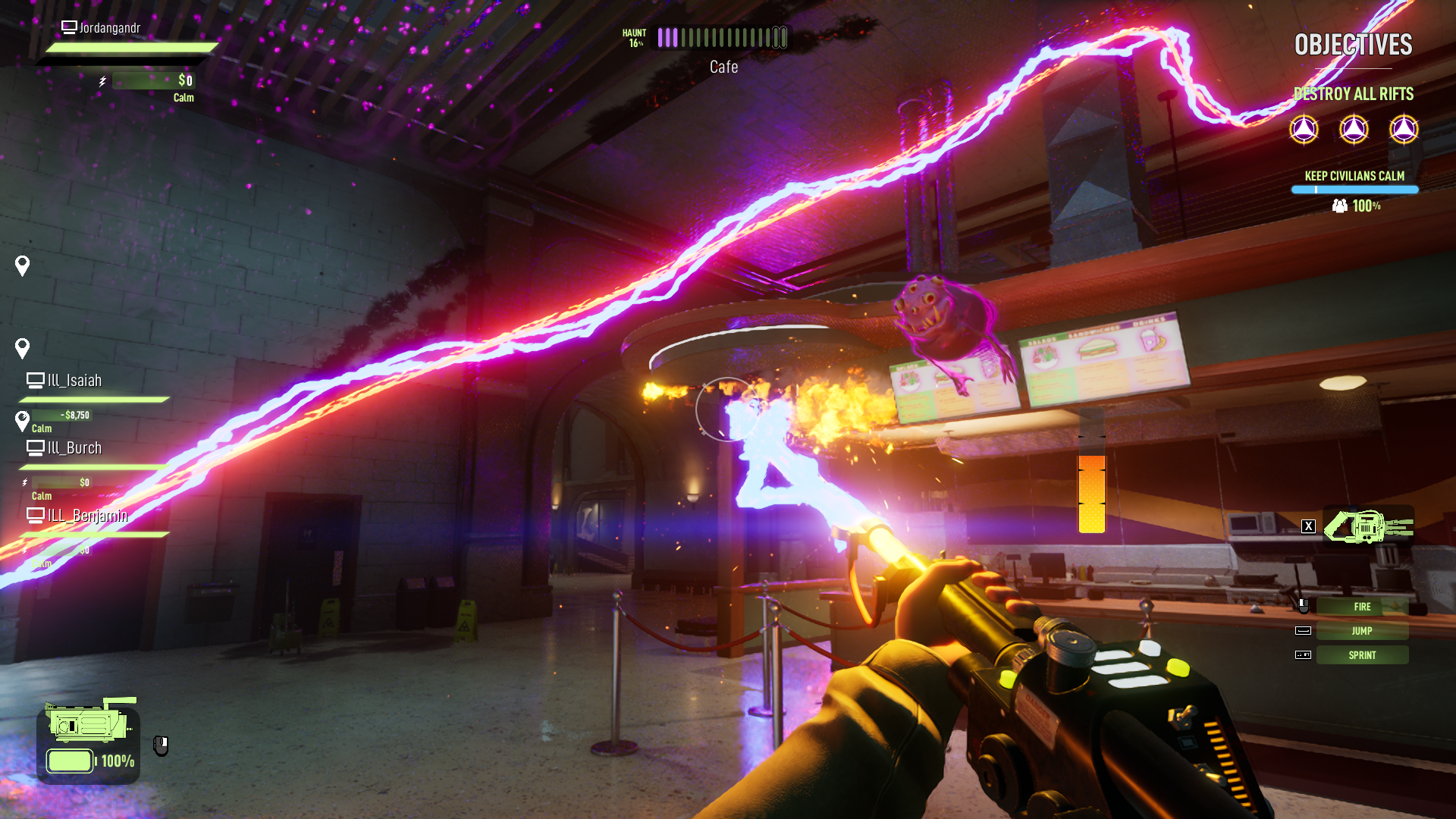 I was only able to try the ghost once during my testing. I thought that if I loaded a game from the spectral realm, I would automatically be in the role of the ghost, but it turned out that I was not. Instead, I found myself in that role quite by accident while pursuing a series of games with players. Perhaps the whole thing works on a rotation system or perhaps I was just unlucky. Either way, it was an enjoyable experience and I plan to try it again when the pool of players is larger. I should also point out that the odds seem very even between the hunters and the ghost. Each side has enough assets to defend itself while trying to accomplish its goal and at no time did I feel that one side had an advantage over the other. He slimed me. I feel so funky.

The game is designed as an asymmetric four-on-one multiplayer experience. As a Ghostbuster, you will need the cooperation of your teammates if you want to defeat the toughest ghosts. Although the game can be completed as a single-player, I do not recommend it. My experience with the AI in Spirits Unleashed is… uneven. At times, my teammates did absolutely nothing right. They would run in circles or get stuck in walls. When it came time to capture the ghost, either no one threw a trap or, on the contrary, everyone threw it at the same time. Strangely, other times it was the other way around. I’d barely have time to find and destroy one breach before the other two were already destroyed and the ghost captured. In both cases, it doesn’t make the games that interesting. I did have the opportunity to test the game with other players and the experience is very different. The players are more alert and respond better to what is going on around them, but the communication sometimes left something to be desired, as in many cooperative games. Especially since the game doesn’t offer a minimap, it wasn’t always easy to try to find each other! That’s why I recommend playing the game with friends whenever possible. Communication will be optimal and the game experience will be improved.

Thankfully we were provided with a few codes to play with a group of colleagues and the experience was everything you would want from a multiplayer game of this calibre.

Drop everything, Venkman. We got one.

Ghostbusters: Spirits Unleashed unfortunately suffers from being repetitive. The different maps are all very distinct and interesting, but there are too few of them. Especially since the gameplay remains the same. After each mission, you can return to the barracks to upgrade your equipment. No currency is present in the game, which means that as soon as you or your piece of equipment reaches the required level, you can upgrade it by selecting one of the possible variants. These are not always strictly better than the previous one but offer different bonuses which will vary in usefulness depending on the situation. For example, you can upgrade your PKE Metre so that it detects ghosts more easily than rifts or vice versa. During the mission, you can go to the gear cart and modify your equipment at any time, depending on your needs. Several gadgets will be added to your arsenal along the way, including a grappling hook for easier access to heights. 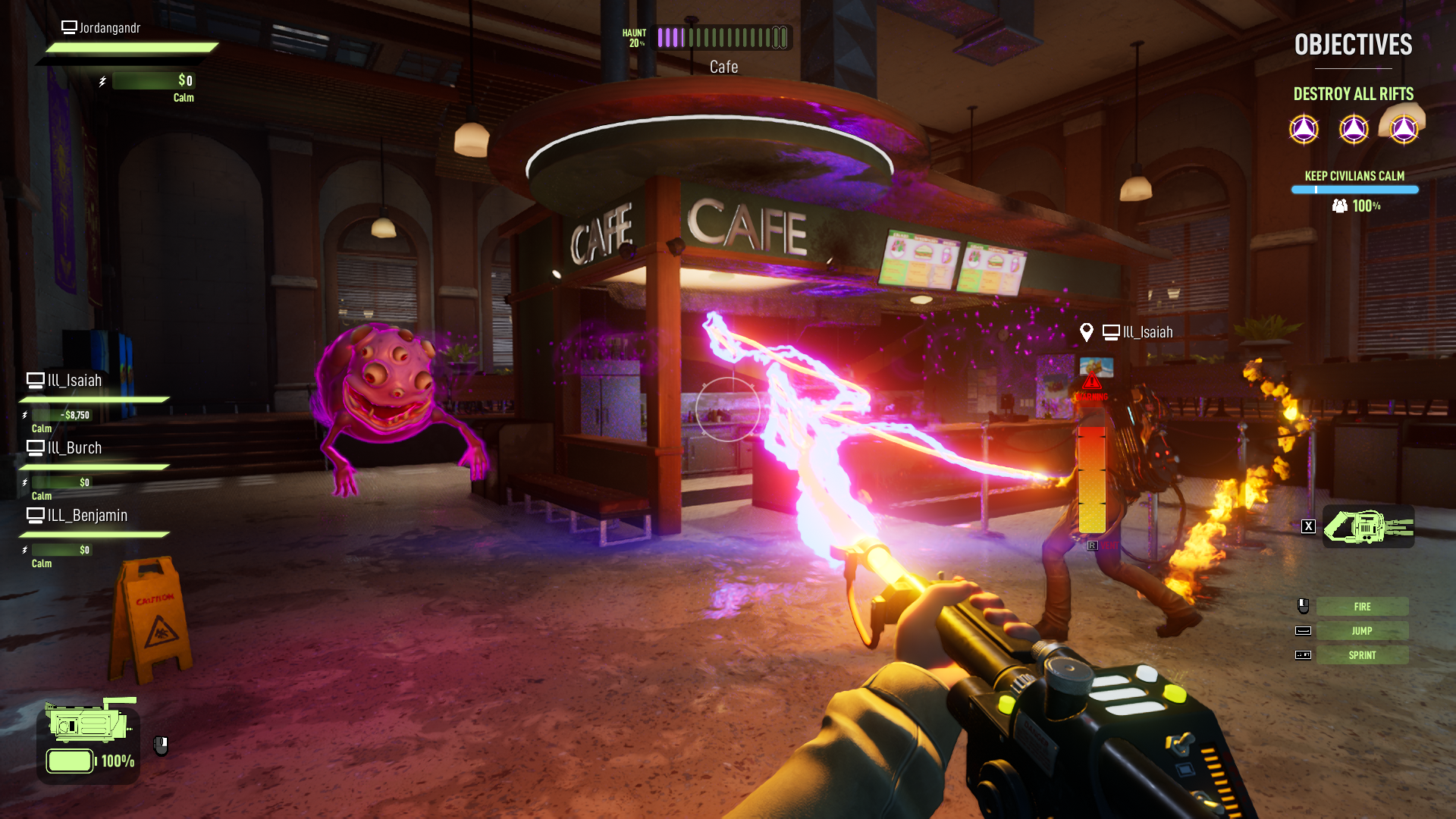 You’ll unlock new customization tools for your character, which you can also change at any time via a locker in the barracks. The game also offers a system of challenges where you select one from a list and, when completed, receive a reward of experience points. Not to mention the newspaper clippings to be found in each of the locations that will give some context to the mission. Nothing exciting, honestly. Finally, by capturing ghosts, you will advance the story, which is divided into acts. It’s essentially a series of cinematics which, although nice, are very superfluous. You soon notice that it’s just an excuse to continue the same missions over and over again for the umpteenth time. Ghostbusters: Spirits Unleashed is a fun, but redundant experience. It is both a faithful and polished multiplayer game but it also feels like an adjacent experience. Illfonic knows what it takes to bring people together however Ghostbusters: Spirits Unleashed is to succeed it will need to add more maps and more variety. The gameplay itself is more than enough to keep you engaged and as they say… ‘Busting makes me feel good.

Recommended
Ghostbusters: Spirits Unleashed is one of the best asymmetrical multiplayer games out there but only when playing with real people.
Liked
The ability to team up with four friends is a massive highlight
Packed with nostalgia
Recruiting Dan Akyroyd and Ernie Hudson elevates the experience
Didn't Like
The AI can often work against your goals
There is a lack of variety in the objective you need to complete
Related