Atmosphere and tone were never top of mind when playing games in the 90s and early 2000s, I wasn’t mature enough to appreciate them. In recent years, we’ve seen more and more titles focus on these attributes. Case in point, Ghost Song, a game chock-full of melancholy tones, ornate surroundings, and a clear inspiration from the atmospheric games of yesteryear. On top of that, Ghost Song is just a blast to play, complete with a deep story worth unravelling.

A Fish, or Ship, Out of Water

Ghost Song begins as many side-scrolling Metroid-likes have in the past; you’ve woken up and are unsure of your surroundings or the circumstances that brought you there. Time to investigate. You play as a “Deadsuit,” a robotic suit/android that boasts a handy arm cannon (yes, like Samus) and some hidden skills for traversing the alien moon you’re on. It’s now up to you to figure out exactly what’s happening, who you are, and who these other creatures are that you’ll meet throughout your journey. 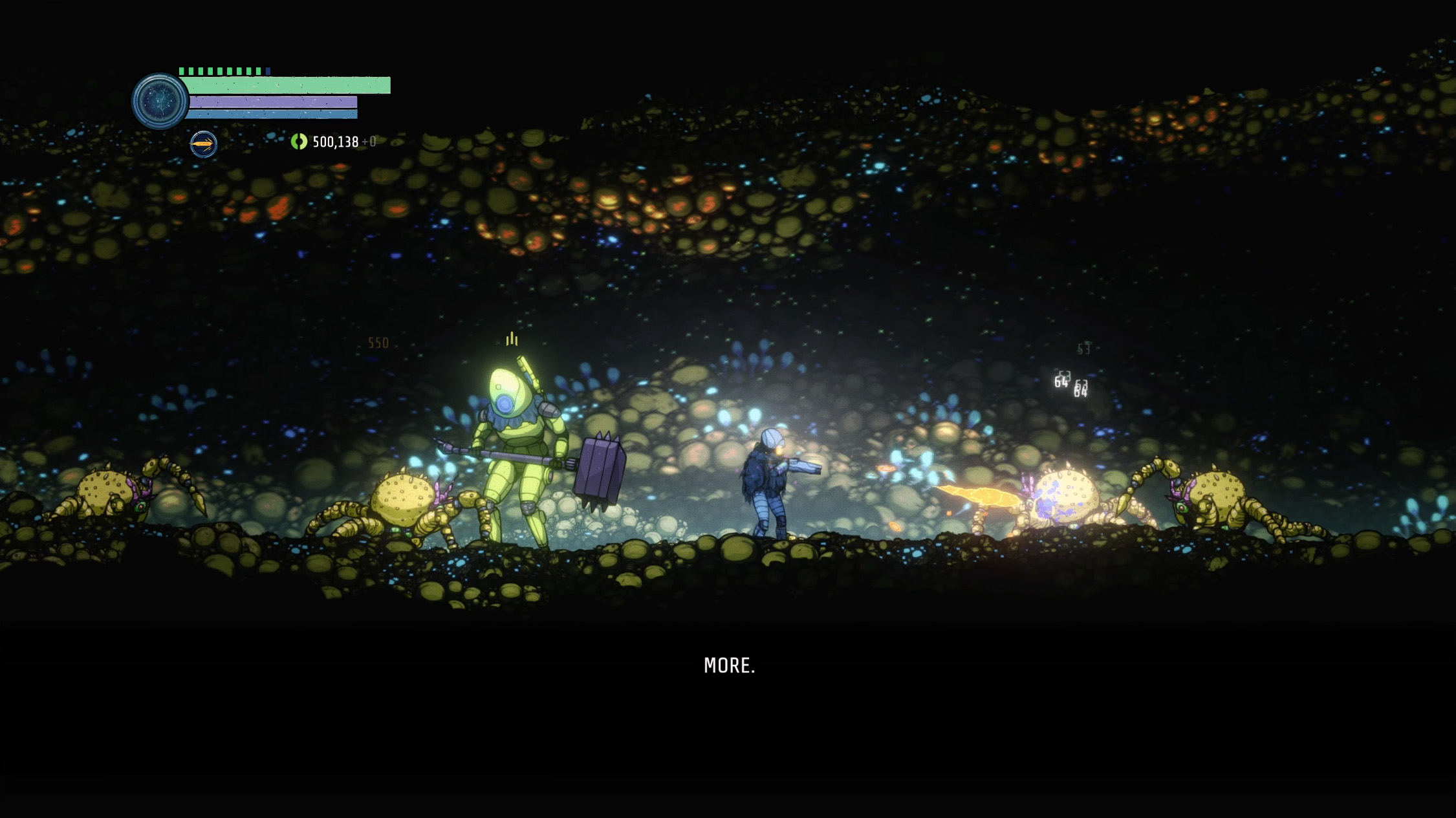 While the above description may be vague, it’s intentional. One of the most impressive and enjoyable aspects of Ghost Song is the moments of discovery. You can find this in gameplay such as a new ability, the currency for upgrades, or an enemy. But more often than not, it’s the story and character moments that shine. There are NPCs littered throughout the game that give personality through some impressive voice acting and great writing.

Samus Would Be Proud

From the get-go, there is no question that Ghost Song takes inspiration from the Metroid series. Whether it’s the weapons, the map, traversal elements, the save system, and the backtracking, it’s all there. None of this is a bad thing though. While I personally haven’t played Metroid Dread, every aspect of this game showed me just how much developers can learn from past experiences to create a more robust and fine-tuned title. 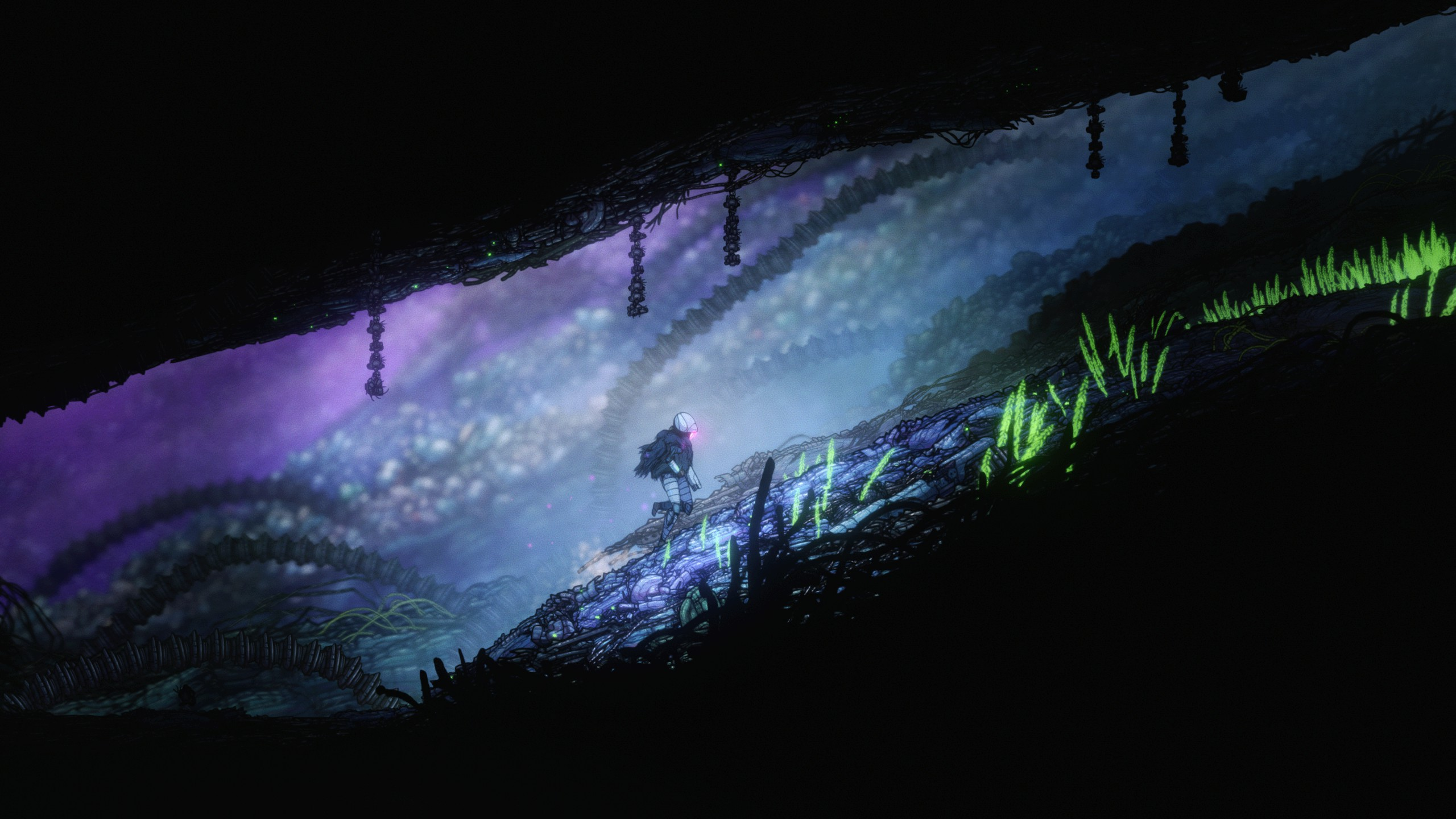 Ghost Song mostly consists of making your way through underground tunnels where you’ll have to defeat a wide variety of enemies. They will range from organic turtle-like wall crawlers, giant robot skeleton heads that fly through the air, and tall and skinny aliens with blasters. Each and everyone needs to be approached in their own way, and carefully. They are all unique and very well designed from the way they act, and the way they look.

Ghost Song does not hold back, it is difficult and unforgiving at times. Partially due to the save and checkpoint system. That’s my biggest gripe with the game. Sure, the game doesn’t have to include an auto or quick save option, that’s a design choice and that’s ok. But especially early on, death is a huge mood and momentum killer as you’ll often respawn in a distant area of the map because that was simply the last save point you could actually access. It’s the one mechanic from the Metroidvania genre I wish was not used. Thankfully, fast travel is introduced, I’d have just liked to have it sooner. 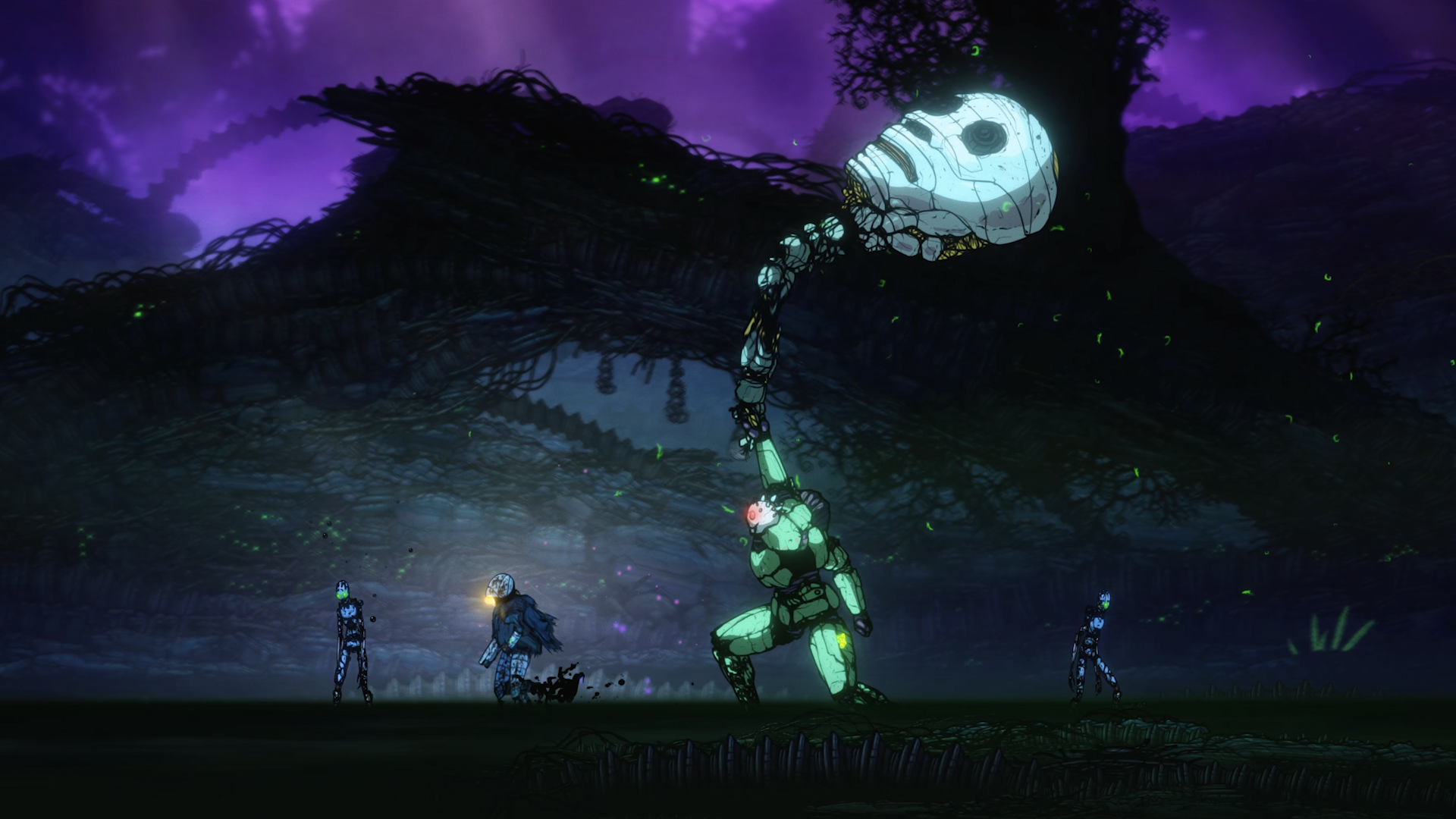 Aside from that, the gameplay is a lot of fun. There is a huge arsenal of add-ons and weapon enhancements you can gather and equip along the way. Shields, melee weapons, abilities, and more are ready to be utilized and put together in a combo. Each time I unlocked one I immediately equipped it to see how it changed my combat and traversal. The reasons why you want to switch things up aren’t just for the fun of it, but because the situation calls for it.

Like with any Metroidvania, there are a ton of opportunities to backtrack and unlock areas and secrets. Ghost Story has numerous situations where I either stumbled upon one of these, each one rewarding it with what it gave me. Sometimes I was crushed moments later by a room of enemies I wasn’t prepared for. But as I mentioned above, I could come back with a new kit of abilities and enhancements and be on the winning side of the battle. 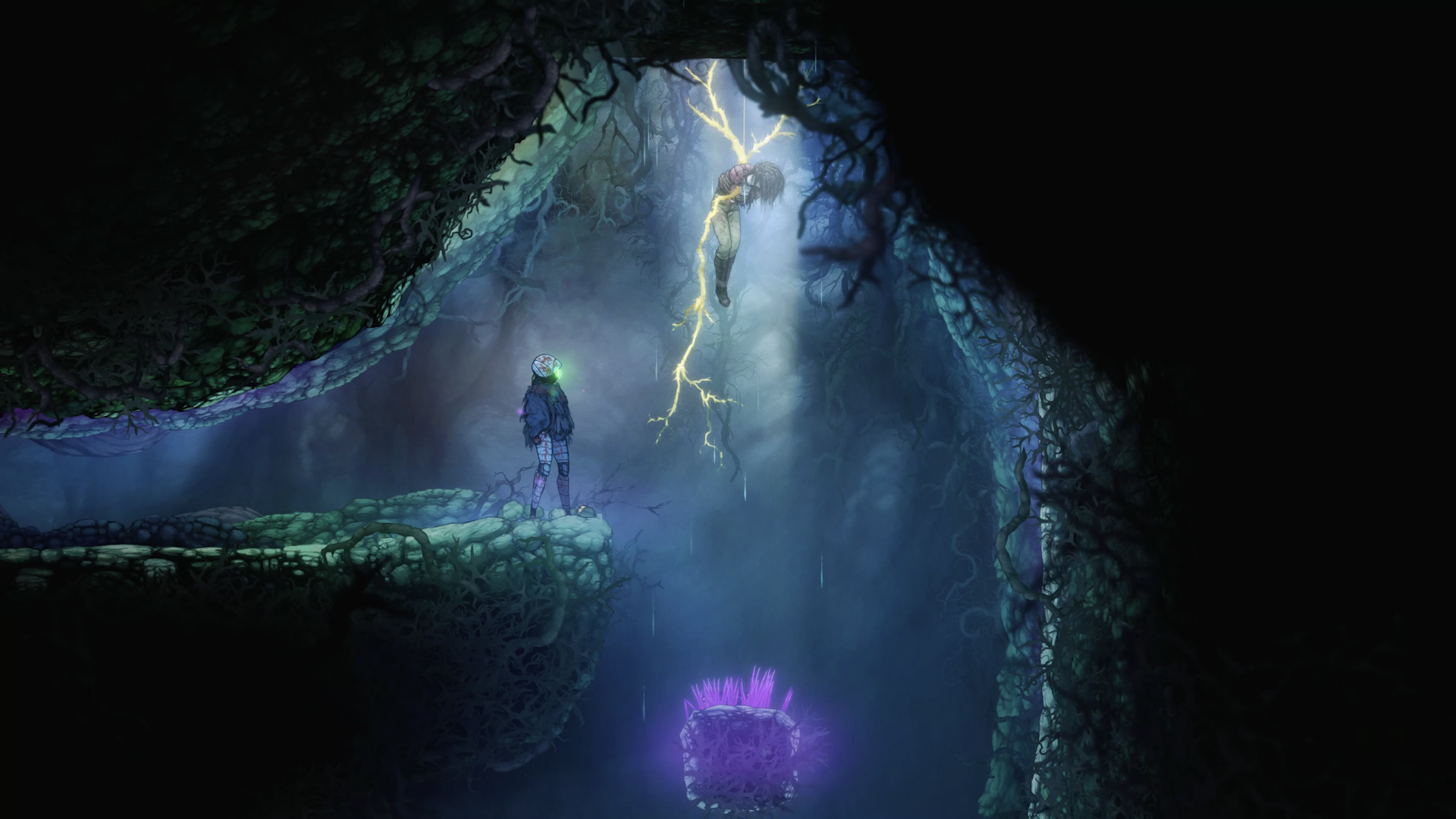 One area where Ghost Story felt refreshing, even if it was in a minor way, was how it handled stamina, ammunition and weapons. Whether it be the main arm cannon (complete with multiple weapon types), or stamina from melee combat and running; it’s all handled with cooldowns. I was never stuck with no ammo or not enough to get into a fight. I was never too low on ability power, I just needed to manage all of them at the moment. I found this to be fun and challenging all at the same time.

I’ve mentioned multiple times that the mood and atmosphere in Ghost Story are not only impressive but a standout attributes of the game. Despite fast-paced fights and dynamic weaponry, the game still feels like a sombre trek through unknown lands. Sure, at times it may have felt a little slow and tedious to start, but once that was behind me, my appreciation for the developer’s direction grew. 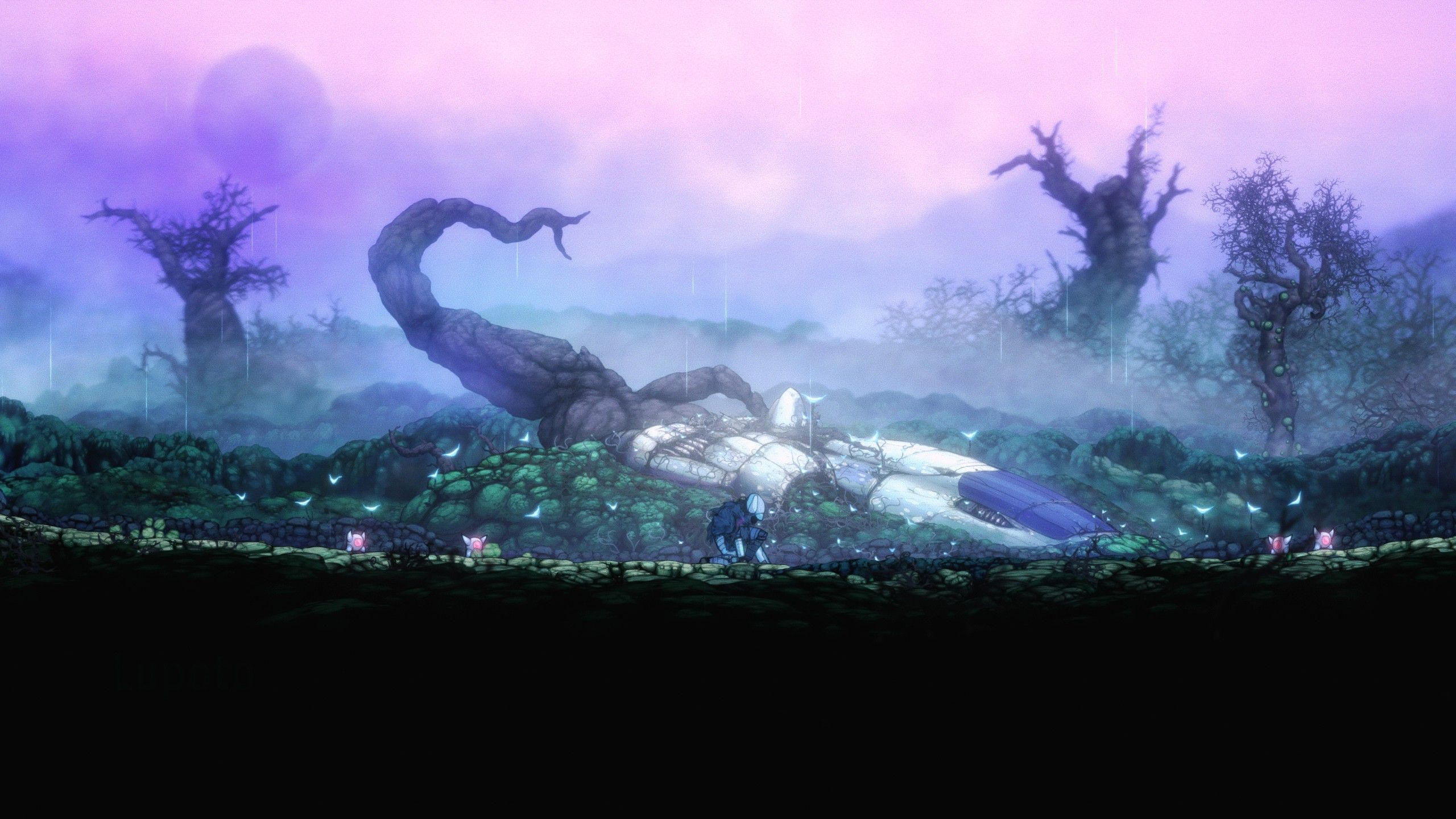 Ghost Story also has an excellent soundtrack. It adds to the overall vibe of the world you’re exploring for 10+ hours in all the right ways. Sometimes the sound design is as subtle as a breeze wisping through the cave, or the crunch of an alien egg under the Deadsuit’s foot. All of this makes the world feel real and one with a history worth exploring.

Drawing heavy inspiration from a series of games that are almost universally renowned, Ghost Story should be in that modern conversation. Don’t go into it expecting a flashy spectacle, but get ready for challenging battles, great storytelling, and a world with lots of dark corners to explore and uncover. If you’re in the mood for an atmospheric action adventure, look no further.

Recommended
With deep inspiration from the Metroid series, Ghost Song creates an atmospheric action-adventure with countless corners of an alien world worth exploring.
Liked
Excellent atmosphere and mood
Challenging and rewarding combat
Interesting world and storytelling to uncover
Didn't Like
Starts off quite slow and sometimes felt tedious