The Coalition has teamed up with Microsoft Studios to bring us another installment of the fan favorite Xbox exclusive Gears of War franchise. The Coalition are pretty new to the gaming world (formerly Microsoft Vancouver), but given that the first game they worked on was the Gears of War Remaster of the first game, I think they can handle this. Gears of War 4 follows JD Fenix, the son of Marcus Fenix, as he and his friends Delmont ‘Del’ Walker and Kait Diaz evade the grasp of the COG and try to rescue their family and friends from what they dub ‘The Swarm’.

First of all, this is the best Gears game since the original, and I commend the Coalition on this amazing revival. One of the best parts of the game is that it looks fantastic. It’s Gears of War so obviously everything is going to be super dark, but everything from the day scenes, to the darkest night scenes looks spectacular, the best part being the various degrees of weather. Along your journey you’ll encounter conditions from a simple heavy breeze that slowly turn into heavy windstorms that will affect enemies, combat, and even your weapons. The Coalition really need to make some animated video game films, because the Gears 4 cut scenes are simply beautiful. The Gears of War games have always had great voice actor casts, but Gears of War 4 really steps up the game (no pun intended). Headlining the cast in the lead role as J.D. Fenix is Liam McIntyre (some may recognize the name from the show Spartacus). The supporting cast consists of well-known voice actors such as Laura Bailey (Telltale games) and of course John DiMaggio as Marcus Fenix, as well as Jimmy Smits (Star Wars, Dexter). The whole cast really does a great job with their roles paired with the exceptional writing. Lastly, and still pertaining to the voice actor topic, the humor in the game so far kicks the ass of any other Gears of War game. From witty back and forth banter, to great one liners, the humor is definitely a huge plus.

Now, Gears of War was never known for its amazing story or writing, but the story in Gears of War 4 is actually pretty solid. It’s not generic and has some great and surprising twists. Kudos to the writers for the great dialogue AND good story. Gameplay is what you’d expect from a Gears of War game, pretty linear, shoot and proceed. I’m not sure what’s different about this one but this is the most fun I’ve had with a Gears game and it’s even more fun playing it in co-op. My 9 year old sister joined me for the dark, bloody trip and she’s already nagging me for us to start another play through, so that’s got to amount for quite a lot, eh? Lastly, the weapons in Gears of War have always been pretty unique and awesome, and Gears 4 isn’t going to stop that tradition. Joining the already insane roster of weapons this time around are the Dropshot (a gun that fires off aerial mines with drills attached to them) and the Buzzkill (a gun that shoots freaking saw blades). Both guns are a welcome addition. I know nobody likes to admit it, but no game is perfect, and as much as I loved Gears of War 4 it’s nowhere near perfect. First of all, the campaign is EXTREMELY short, we’re talking about only 6-7 hours (9-10 if you really take your time). That’s not too bad but when you factor in that this is a AAA game and the base version alone costs $80 plus tax (in Canada) that’s a big issue. One thing I never really liked about the Gears franchise was how repetitive the games are, and Gears 4 doesn’t really improve upon this. The game is essentially; run, shoot, big monster, shoot, run, exposition, run, shoot, big monster, credits (with some extra stuff thrown in the mix). As much as I praised the writing, one thing the game really could have used is some backstory about the main characters. We go through the game knowing almost nothing about these characters, and the game just expects us to care about these people. Now, their dialogue does provide some light on their lives, and it gets us liking the characters for the humor alone, it’s still not enough. What is a game without glitches? I almost feel like a jerk for including them in reviews but the locusts aren’t the only infestation Gears 4 has, it’s got a nice handful of bugs as well. The bugs for the most part weren’t that bad, an invisible wall here, phasing through walls there…but then the fun glitches started. More than once I got to witness a character literally fly at high speeds across and around the screen for about 1-2 seconds. Lastly, the frame rate was a huge issue for me. If things got pretty hectic the frame rate would suffer pretty bad, but weirdly enough it happened mostly near the end of the game.

At the end of the day, Gears of War 4 is a pretty successful installment into the GOW saga, and I am more than comfortable with The Coalition taking over the reins from Epic Games. The game looks great, it’s extremely fun, and everything is backed up by more than solid voice acting and story. The game really suffers from its short campaign and repetitiveness but these are some things that are easy to fix if The Coalition and Microsoft decide to continue this epic series. If you’re a huge fan of the first Gears game or all of them for that matter, then I am sure you will like Gears of War 4.

Gears of War 4 is now available on the Xbox One and Windows 10 and is part of the Xbox Play Anywhere promotion meaning when you buy the game you own if for both PC and Xbox One. 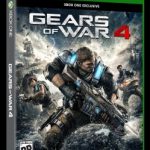